If nothing else, you’ve got to give the Down Under franchise credit for making excellent use of their Pit Crew. And considering how quickly the show tends to embrace cultural or national cliches, it’s maybe a little to its credit that they haven’t had them working a lifeguard look every week. Of course we’re saying that as you look at a man with a koala in his pants, so take it with a grain of salt. Lorenzo wound up taking well over a dozen screencaps of the expanded Pit Crew, but we agreed, after much editorial discussion, to limit overwhelming this recap with distractions. Our restraint is to be commended, don’t you find? Anyway, the episode opened like pretty much all episodes of Drag Race Down Under, with all of the girls being absolute c*nts to each other. We remain impressed by how much these queens can let the shade roll of their backs, but as a group, they are freaking relentless with each other. Suddenly, boys showed up. Maxi’s knowledge of animal trivia won her the chance to assign which boys went to which queen for a makeover and because she seems to be a generally sweet and positive queen, she made sure to pair everyone up with the person most suited to them. This may have been a fatal mistake on her part and we wonder if the remaining queens will learn any lessons from it. We’ll always have a soft spot for the Drag Race family makeover challenge, because it was the one that made us realize the theme and framework for our book; namely, that all of the aspects of the show are directly traceable to aspects of queer life and history. Since we’re well into the second decade of Drag Race, these challenges can either become meaningless or they can get even more minutely specific in what it’s examining and highlighting. What we mean is, the makeover challenge has paired the queens up with elderly men, butch women, straight men, straight men about to be married, production crew members and even their own family members and later, husbands and boyfriends. Each time these pairings happened, issues of masculinity, aging, straight allyship and family were explored. This time, the queens were paired up with other gay men; in this case, members of a gay rugby team. So while the revelations and juxtapositions may not have been as extreme as other versions of the makeover challenge, we did appreciate this one for underlining the spectrum of gay maleness, and how sporty, more traditionally masculine gay men and mostly femme-y drag queens can still explore their differences and what it means to their identities. The results were fairly high-level across the board, although we think Art Simone had a point that the queens mostly created clones of themselves rather than family members. Still, we had a hard time remembering what any of the visiting queens looked like out of drag, which is a credit to the competing queens’ collective efforts. Thrilled to see Kita pull out a win this week because the other queens were starting to be real bitches about it. She managed something none of the other girls did: She created a second character based on her own instead of just making someone up to look exactly like her. The subtle differences like the reversed hair color or the stripes vs. the polka dots did exactly the right amount of work to turn them into sisters rather than copies. You can feel the judges losing interest in Elektra. She shows improvement each week but she also shows her limitations. Like too many of the queens, he made two identical versions of the same look. It’s one of his better looks, but we think he needed to reverse the colors or something for his sister. The makeup was rough, but it was a smart choice to do such a heavy paint job in an unusual color because it sort of covered for the roughness a little and it allowed for an easier resemblance. Even so, it’s only a good effort. The overall problem with Elektra’s drag, aside from its roughness, is how it feels so dour and joyless all the time. We groaned when Maxi and Cilla came out. Maxi’s drag has been fantastic all season long and on this challenge, all her skills and style just evaporated. She did a wonderful job on the makeup, but everything else looked like something we’ve never seen from her: lazy drag. We of course loved the Priscilla homage and the work here is among the very best on the runway, but even if his critique about the other girls creating clones was on point, he went too far in the other direction. They look great, but they look like two drag queens who work together, which is exactly what the costumes they’re referencing were made for. 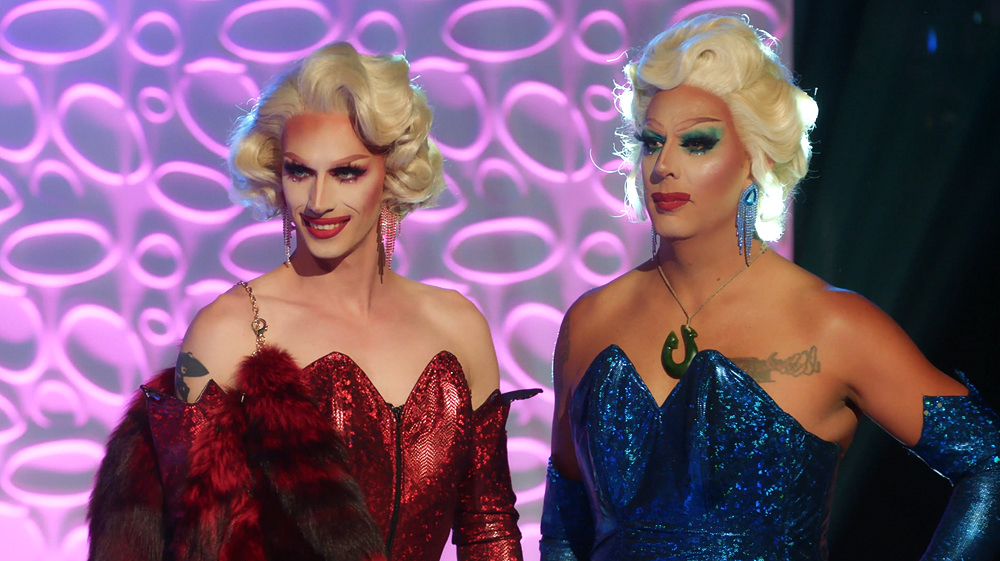 Everything about Scarlet’s looks felt lazy and looked half-assed. Basic-ass Marilyn-as-showgirl drag should, at the very least, be executed to perfection if only to make up for the lack of originality in the concept. She gets some credit for making a costume from scratch, but it’s a simple design and she just didn’t do much with it. At first we thought the judges singling Karen out for making another version of herself felt a little arbitrary given how many of the queens went a similar route, but this concept would have worked so much better if they weren’t in identical outfits and nearly identical wigs. Karen’s drag persona is so specific that she should have considered making some tweaks to it when making up her sister; especially when you consider how aggressively “white lady” her persona is. Even a different blouse, lip and wig color would have done a lot. Exactly the right two queens wound up in the lip sync and we’d like to say it was an epic showdown, but once again, the Down Under girls fail to really bring the drama to the lip sync. At first glance, the song seemed better suited to Scarlet’s more choreographed and acrobatic style, but Maxi (even without the mic prop) really is great at mimicking a singer, exactly matching the facial expressions to the lyrics. Having said that, even we think it was Scarlet by a hair. We’re really sorry to see Maxi go because we think she outranks quite a few of the remaining queens in terms of talent and skill. But there’s just no denying that this week’s effort was elimination-worthy.