Girls, we’ve got a lot of ground to cover, so let’s get to it. There was drama this week. There were emotions expressed. There was patriotism. There was diversity. There was Jeff Goldblum. Being Inappropriate. Like we said, it’s a LOT. Walk with us. As we said last week, we don’t mind product placement in reality television too much, so long as it’s integrated well. There’s something a little appealing about the show simply leaning into and making the girls roll around in kitty litter without pretense about what they’re doing. The results weren’t exactly hilarious across the board, but it’s one of those mini-challenges that actually does challenge the girls to do something creative in a weird situation. Raven makes a fun Werk Room visitor because she’s always been good at cutting through bullshit and she tempers that with the self-awareness to acknowledge that she didn’t actually win the competition. We question the proportions on her outfit, however. This was a pretty well-conceived challenge that pretty much took the template of the Snatch Game and applied it to a political debate sketch. Rachel Bloom and Jeff Goldblum were into it and gave all the queens an opportunity to hit the balls being slow-pitched to them. It’s the kind of challenge that puts the queens through their paces and we suspect some of them didn’t realize going into it how much it was going to ask of them. 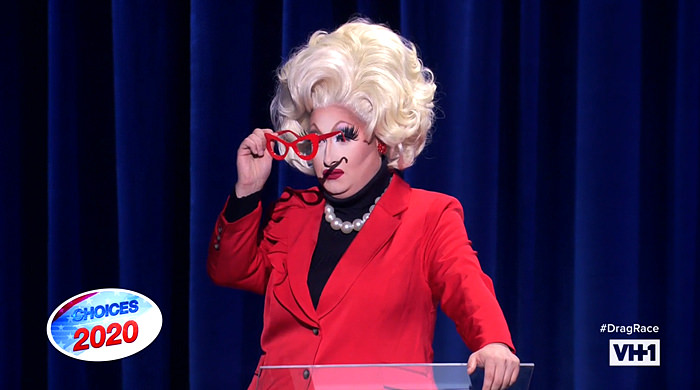 Sherry gets more airtime with each passing episode because there’s a smaller pool of queens each week and because her work tends to invite commentary or critique. This week it was the latter as the judges nailed her for returning to the same jokes and the same old lady drag, while acknowledging that her level of polish makes her a worthy competitor. We’re at that point in the competition when micro-differences in quality or performance can wind up turning into huge differences in the judging session. Jackie’s look was great and she had a fully realized character. The problem was that she had one joke and none of the various iterations of it were really all that funny. Crystal continues to find herself within this competition. She’s succeeding by combining a knowledge of what Ru sees in her and a commitment to leaning into her true Crystalness. She was funny, but the look here was so-so. Those necklaces looks mighty craftsy. Heidi skated through on her inherent charm and a fully realized character. The judging went to some weird places (more on that in a second), but Widow could have defended herself better by acknowledging how much of modern politics is about inflammatory rhetoric and divisive statement-making. It’s true that she never really found a joke in all of that, but she remained very on-point in everything from look to speech style. The “angry” critique from the judges was a little off-base, if not downright questionable. Gigi continues to reveal her limitations as the challenges get more difficult and she faces fewer cannon-fodder queens. The look was high-fashion but it sure didn’t say “political” to us. And she fell back on the robot girl thing again, much like Sherry’s reliance on old lady jokes. What made Jaida’s performance work so well was combination of completely inappropriate look and a character who understood on some level she had no right being there.

Whose patriotic lewk was your favorite? #DragRace pic.twitter.com/Xkwdj0ZkH0 They’re narrowing it down to the upper-echelon girls which means the expectations for the runway looks are getting more and more demanding. This was a fun theme that gave the queens plenty of room to interpret it. 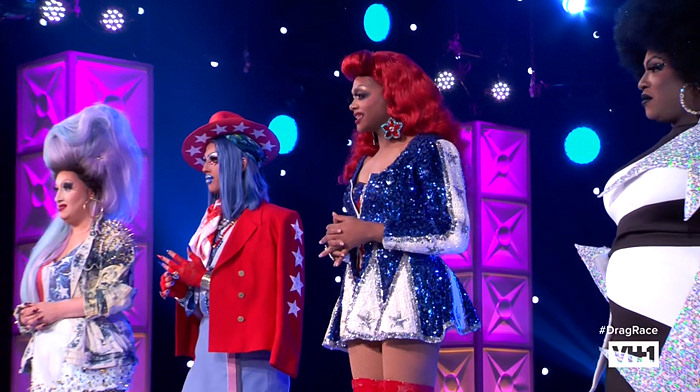 Sherry’s look was original and the concept was fully realized and easy to understand. Crystal’s look was very Crystal, in the sense that it was fun but it felt overdone and a bit of a mish-mash. LOVED Heidi’s look. The retro wig really makes it. Widow got commended for taking the theme in a different direction but we don’t think it worked for her at all. It’s just a gown with stars attached to it. Jackie’s look was very powerful and beautifully rendered. Jeff Goldblum was a charming guest judge in a lot of ways, but his questioning of Jackie was very uncomfortable to watch. You don’t put a Muslim queer person on the spot like that and ask them to explain what you see as the inherent contradictions in their existence. Think of it this way: Of the countless times this show has served up drag takes on nuns or right wing Christian women, no one ever asked any queen to defend why she was doing that kind of drag. Of the many times queens have thanked God or Jesus for helping them in some way, no one ever put them on the spot about it. And of the countless times queens on this show have paid homage to their own cultural backgrounds, no one ever asked them to defend or explain the parts that might be considered problematic. Ru kind of/sort of weakly shot it down, but it would have been better for the show to have simply edited that part out.

Gigi’s look felt very familiar to us. It’s striking, of course, and she’s got the star quality to make it work (again), but she really is starting to show her limitations. She needs to step that Goode pussy up. On a stage loaded with high-end costumes, Jaida’s just felt like the most fun, joyous and draggy. She earned her win. We’re pretty big Gigi cheerleaders in a lot of ways, but even we can see that she should have been in that lip sync instead of Jackie. On the other hand, you may consider the heavy hand of the producers here to have been in some ways, the right choice for the show. Look at it this way: If you were the producer and/or host of an Emmy award-winning reality show, you would almost certainly see the dramatic potential in making an emotional Muslim queen in a stars-and-stripes hijab and kaftan interpret “Firework.” And in the end, those instincts were right. Maybe Gigi did skate by on this one, but we never would have been treated to the emotional performance we wound up getting. Miss Cox, you see, rose to the occasion. Having written a word or two about what constitutes a great or legendary lip sync, we say with whatever authority we think we can muster out of it that this was an all-timer. Here’s why: First, it was fascinating to watch Jackie’s wheels spinning in real time. She went from a fully comedic approach with schticky undertones in the first few seconds to a moment where we swear if you squint you can see the lightbulb going off over her head. We’ve talked many times before about the advantage a queen has if she’s more suited to a song. Widow’s style of lip sync is intense and might have won if she was up against – well, Gigi, for one – but Jackie realized about 15 seconds into it that what the song really called for wasn’t costume-ripping intensity or schticky comedy bits … It was joy. Full-on, rapturous, life-affirming joy in yourself. That combined with a gorgeous costume that made her look like Persian Katy Perry helped seal the deal. Maybe Jeff Goldblum’s tears were for the camera, but ours weren’t. Widow started off strong and with each critique or ignored effort got more and more into her head. We felt the judging was a little harsh and questionably expressed and the deck might have been stacked against her in the lip sync. Is that unfair? Darling, it’s Drag Race. This sort of thing was built into the show from Day One.

But we sure don’t envy Miss Goode having to face the Widow fans.