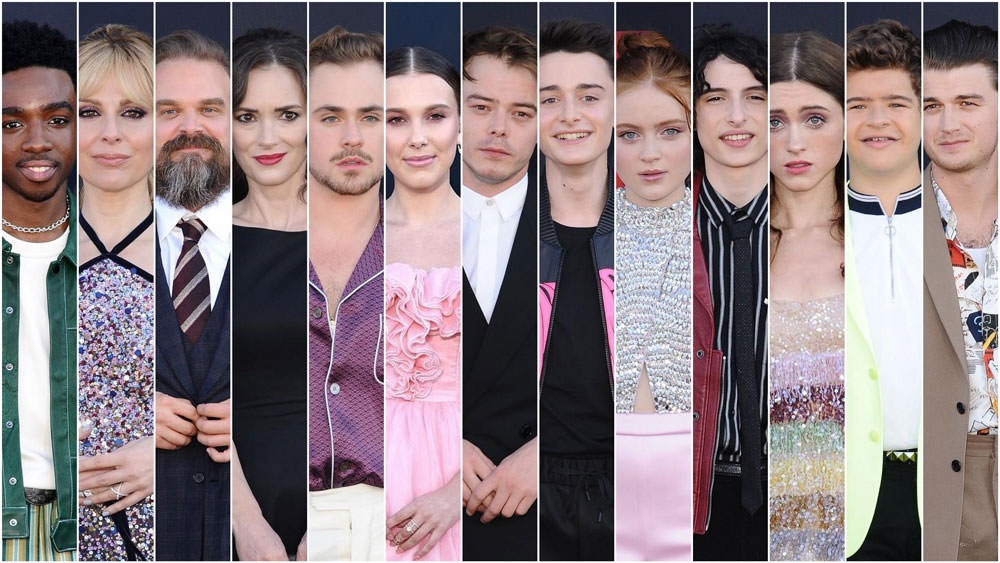 A salute, darlings! To the television cast with the highest number of adventurous dressers and style risk-takers! A celebration of their sense of color, their sense of fun, and their sometimes all-too-hilarious style failures!

Okay, we’re just teasing on that last one. The cast of Stranger Things – largely because of its youth in relation to most other TV casts – really is one of the most stylish on TV. You regularly see these kids in some fairly eclectic and difficult-to-work high fashion. Compare and contrast with, say… the Riverdale cast, which only has one or two risk-takers and mostly hews to a conventional sort of red carpet fashion. We’re just saying. These kids don’t always get it right, but we respect the game they’re playing. The grownups? Well… bless their hearts. LOVE. The proportions strike us as a bit impossible for most, but he can almost make them work. We just wish the t-shirt was untucked. It just keeps getting worse as you scroll down. And it didn’t even start off that great. We can see the quality and fineness of the items from here, but it’s all a bit too sparse and Amish for us. Lighten up, son. It’s fashion. This getup is vaguely ridiculous but we’d argue this guy is doing a bangup job of really leaning into his looks. He was built for this sort of flamboyant sleaze. He needs a big ugly medallion. It’s a nice suit. We have no real issue with it except we don’t think it’s the best use of his big bearly image. Hipster Lumberjack is your look, sir. And “Lead Singer” is yours, sir. But you clearly don’t need us to tell you that. This is all kind of goofily put together and the neon does nothing for him. We don’t like whatever’s going on up around her shoulders, but we really like the rest of this. It’s got this light punk-vintage undertone that really works for her. FANTASTIC look. And he’s one of the few here who doesn’t look like he’s trying. It’s … perfectly Prada. And by that we mean that it’s vaguely sweet and sort of pretty but ultimately too awkward in design. The sheer cape thing is terrible. The matchy pink accessories are too Barbie. We would never try to wave her away from the Gen-X Goth that defines her style, but there’s got to be more for a gorgeous and charismatic actress than a plain black funeral dress, right? Go full-on Lydia Deetz-spooky, lady. This half-assed funeral-wear is not doing it for you.