Miss Jaime deploys the “stop and stare” outfit to perfection. Because seriously, you wouldn’t stop and stare if someone walked down the street dressed like this? “Hart of Dixie” star Jaime King steps out in New York City on her way to the 2014 Young Friends Of ACRIA Summer Soiree in a Jason Wu ensemble from the Fall 2014 collection. 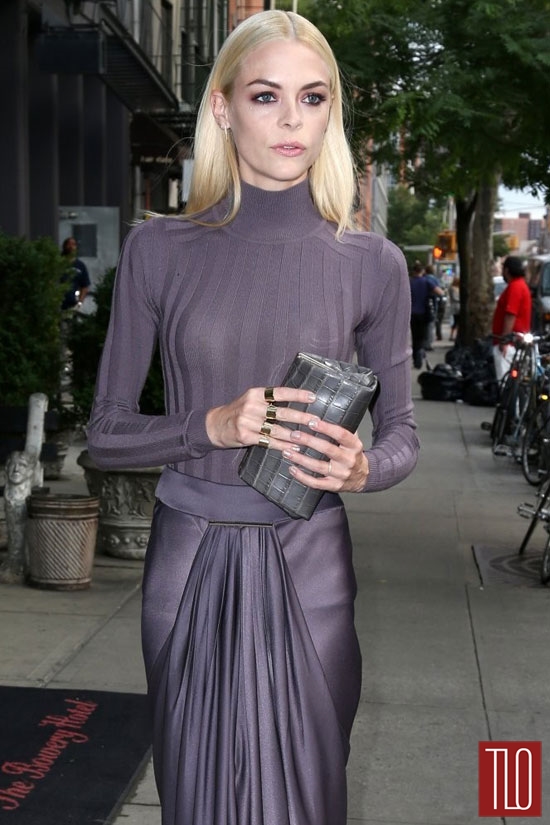 Even with a red carpet backdrop, this would still be a stop-and-stare. It’s so … odd that it demands you take the time to assess it.  The color looks great on her and the shape is really unusual. This may be an instance of a garment finding the perfect wearer, because we’re not at all convinced we’d do anything but hate this on a lot of other ladies, but we’re surprising even ourselves by declaring that we love it. It’s perfect for her. And it can’t possibly be an easy dress to pull off. We’re digging the edginess of the jewelry and the gray of the bag. We even like the pin-straight hair, which really works well here. But the white shoes strike us as a wrong note. They’re a little distracting. Also: that’s a lot of coverage for June, even a relatively cool one like this one has been.

But for picking something off the beaten path and making it work specifically for her, this rates a major “Attagirl.” It’s the most interesting celebrity look we’ve seen in a while.