Home » Television » The Walking Dead: A

The Walking Dead: A 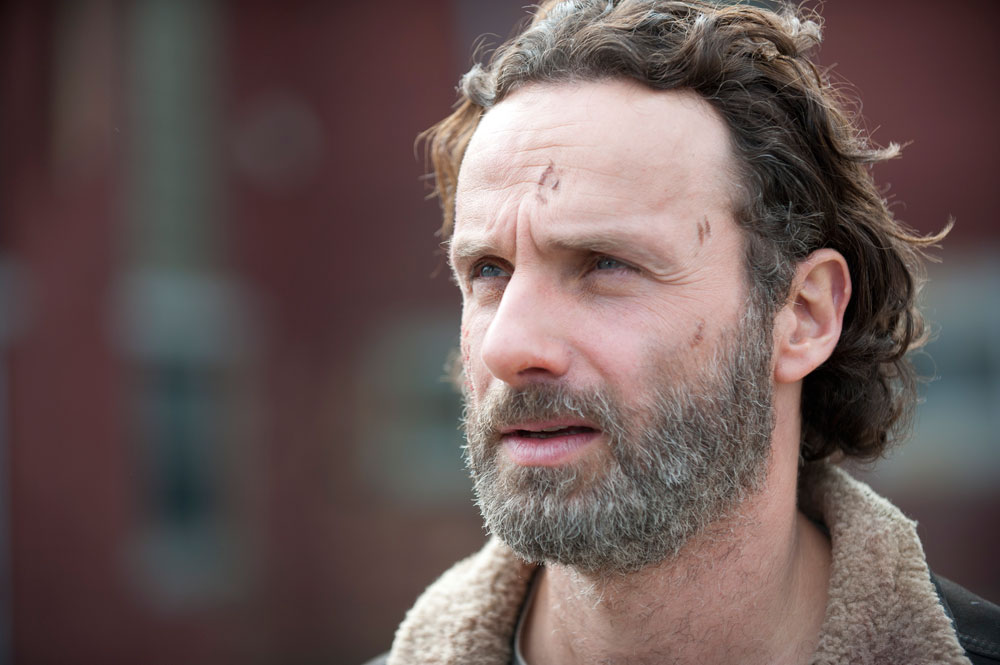 Well, that was an oddly uneven end to the show’s most oddly uneven season. We suppose it was thematically appropriate, if nothing else. We enjoyed most of the hour but ended it feeling torn. On the one hand, things happened and the plot lurched forward. On the other hand, it stopped so abruptly that we couldn’t even call it a cliffhanger. Even worse, they ended it on the lamest ’80s action movie one-liner you could come up with. “They screwed with the wrong people.” Oh, GOD.

Come on, AMC. If Megan Draper can tell Don, “Fuck the agency!” then we think the Walking Dead viewership can handle a well-timed F-bomb from one of its lead characters. Certainly, if you’re going to serve up scenes depicting one man ripping another man’s throat out with his teeth while a third man attempts to rape an underage boy, your reticence regarding naughty words comes off pretty ludicrous. And we haven’t even touched on the implications of the Terminus scenes. If ever there was a time for Rick to look directly into the camera and say “We are going to FUCK THESE PEOPLE UP,” then now would have been the time. In fact, it could have been such a mega-fistpump moment that it would have turned this entire episode into a classic. Instead we got a lot of advancement and tension, with an incredibly limp ending. Ah, Walking Dead. You’re consistent in your disappointment, we’ll give you that.

Then again, if Rick did say something that declarative, it might have come across a bit nuts, since the directing and writing failed to properly convey what was going on in Terminus. We’re all for subtlety in the storytelling and we had no problem figuring out what was happening, but the show was strangely reluctant to show or tell the audience that Terminus was practicing cannibalism. The explanation of how a trap works – by being set along a trail and hidden in plain sight so the prey can walk right into it – was an attempt at some subtlety and metaphor, which we appreciate. We’re not gonna knock the show for trying to inject some layers into its writing. But allusions weren’t enough to sell those final minutes. The entire final scene (as well as that lame-o last line) hangs on the revelation that monstrous things are happening in Terminus. This was not the time to get cute about it. Show the audience what’s happening. Otherwise, Rick looks completely deranged.

Then again, we suppose that was at least partly the point, as we returned once again to the “Is Rick a farmer or a fighter?” question. We can’t groan hard enough at this one. This is what the show does. It focuses on conundrums that are only conundrums for the characters. The audience is never on board. Should Lori choose Shane or Rick? Well Shane’s a psychopath, so the answer’s Rick. Let’s move on. Should we stay on this farm? No, you’re too exposed. Let’s move on. Where’s Sophia? She’s dead, you guys. Let’s move on. Does the Governor have a point? No, he’ll kill anyone who crosses him. Take him out and let’s move on. Is Rick a farmer? No. He’s the only law man in a completely lawless society and he’s an idiot for thinking otherwise. Let’s MOVE ON.

The good news is, despite the show returning to the question long after it’s been answered (Rick killed a guy in cold blood just to get safely out of a house just a few episodes back, remember)  Rick himself appears ready to move the fuck on. Which is good, because if he’d spent any time agonizing over what he’d done, we think we’d need to walk away. Is there anyone who watched last night’s episode – especially any parent – who didn’t completely understand and accept Rick’s actions immediately? Every parent we know would rip out a guys throat in order to save their child from being raped and murdered. It was an awesome scene; both shocking and immediately acceptable at the same time.  And while the pacing was as off as it always is, we kind of liked that the Claim Gang was dispensed with so immediately. Carl seems a bit tortured by what they’ve become in this world, but that scene with Michonne, Daryl and Rick taking out the entire gang was definitive. They’ve become survivors. So hardened and tested that it’s entirely believable that the three of them could take out that gang in a matter of minutes. It was the perfect setup for the shootout at Terminus. Rick’s done agonizing over shit. We can totally get behind this turn of events so long as they don’t hand Rick another series of fuck ups. We’ll take Action Rick and his Band of Battle-Hardened Survivors over Farmer Rick and His Roaming Psych Ward any day of the week.

Still, it’s deeply annoying that Carol and Tyreese are nowhere to be seen and that Beth is just “gone,” according to Daryl, who suffers from Lost-itis, wherein characters fail to tell other characters crucially important information. And there’s certainly a huge chunk of information missing regarding Glen’s group. The pacing is still a bit off and the show is still relentlessly, almost ridiculously dark, but there’s so much improvement that we’re trying to be optimistic about its future. All the good character work done this season means that when Rick tells Daryl that he’s his brother, the moment is poignant and deeply earned.  Give us a group of people with deep bonds in order to combat so much bleakness. Give us smart people who’ve learned how to survive and don’t waste time on dumb shit.

In other words; fine, they’re all cannibals at Terminus. And there are bands of roaming rednecks and psychopaths all throughout the Georgia countryside. Darkness, come. We accept. Just so long as Rick, Daryl, Glen, Carol and Michonne get to band together to be the Justice League of Throat-Rippers and Decapitators, we’re all good.