Home » Fashion » The Royal Wedding: The Bride and her Gown

The Royal Wedding: The Bride and her Gown 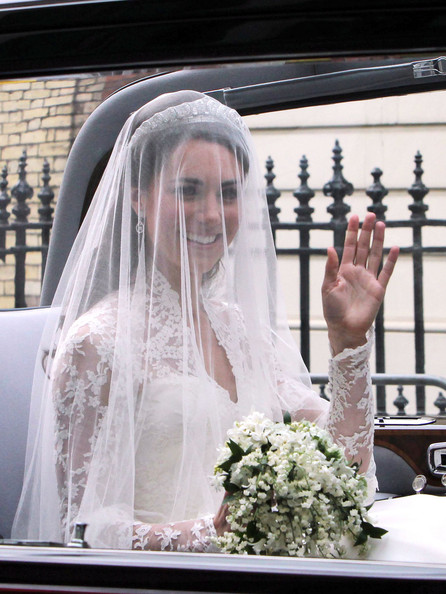 What? You thought these two queens were going to skip it?

Darlings, the wedding is still under way as we type this, but we have to give our minions a place to form opinions, don’t we? Check it: 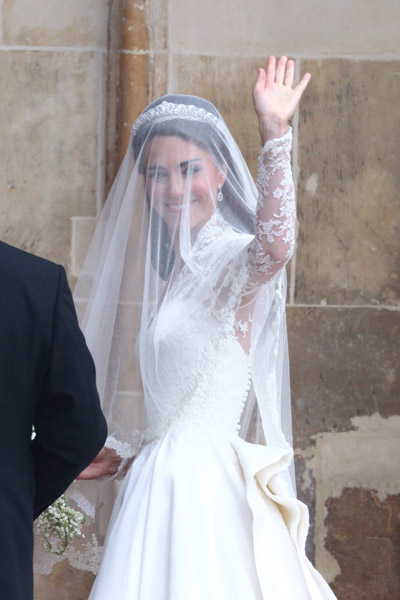 It’s Sarah Burton for Alexander McQueen, as was reported last night. A lovely dress, it reminds us quite a bit of Princess Grace’s wedding gown. It speaks to the way the Royal couple have handled this event and a bit to Kate’s personality: they seem determined in many ways to not dwell on the wedding of his parents and the dress itself seems a conscious choice not to indulge in over-the-top princess fantasies. It’s a graceful dress that isn’t at all showy, all things considered. Very much in the Kate mold. 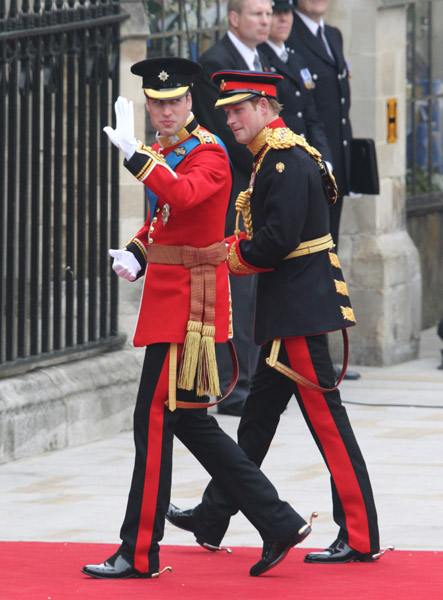 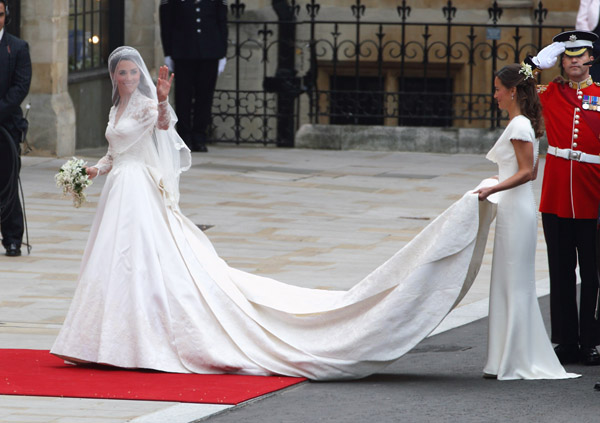 From the official Royal Wedding site:

The dress epitomises timeless British craftsmanship by drawing together talented and skilled workmanship from across the United Kingdom. The dress design pays tribute to the Arts and Crafts tradition, which advocated truth to materials and traditional craftsmanship using simple forms and often Romantic styles of decoration. Ms Burton’s design draws on this heritage, additionally giving the cut and the intricate embellishment a distinctive, contemporary and feminine character. 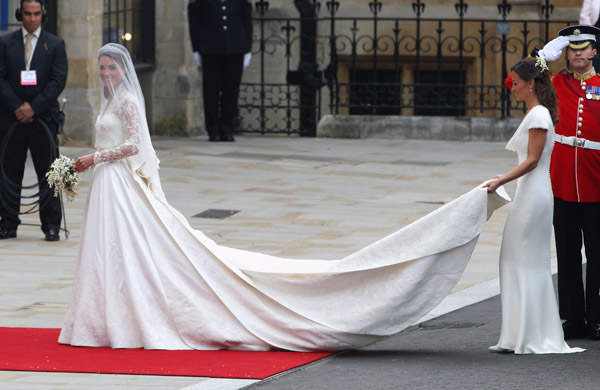 The lace appliqué for the bodice and skirt was hand-made by the Royal School of Needlework, based at Hampton Court Palace. The lace design was hand-engineered (appliquéd) using the Carrickmacross lace-making technique, which originated in Ireland in the 1820s. Individual flowers have been hand-cut from lace and hand-engineered onto ivory silk tulle to create a unique and organic design, which incorporates the rose, thistle, daffodil and shamrock.

Hand-cut English lace and French Chantilly lace has been used throughout the bodice and skirt, and has been used for the underskirt trim. With laces coming from different sources, much care was taken to ensure that each flower was the same colour. The whole process was overseen and put together by hand by Ms Burton and her team.

The dress is made with ivory and white satin gazar. The skirt echoes an opening flower, with white satin gazar arches and pleats. The train measures two metres 70 centimetres. The ivory satin bodice, which is narrowed at the waist and padded at the hips, draws on the Victorian tradition of corsetry and is a hallmark of Alexander McQueen’s designs. The back is finished with 58 gazar and organza covered buttons fastened by Rouleau loops. The underskirt is made of silk tulle trimmed with Cluny lace. 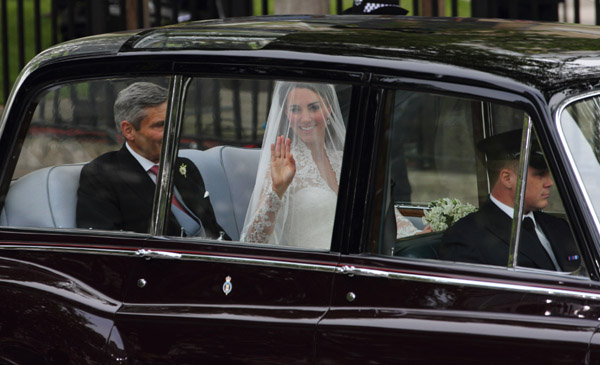 French Chantilly lace was combined with English Cluny lace to be hand-worked in the Irish Carrickmacross needlework tradition.

All other fabrics used in the creation of the dress were sourced from and supplied by British companies. The choice of fabrics followed extensive research by Sarah Burton and her team.

The Royal School of Needlework

The Royal School of Needlework (RSN), based at Hampton Court Palace, assisted the Alexander McQueen team in accurately cutting out the delicate motifs from the lace fabrics and positioning the lace motifs with precision into the new design. The lace motifs were pinned, ‘framed up’ and applied with stab stitching every two to three millimetres around each lace motif. The workers washed their hands every thirty minutes to keep the lace and threads pristine, and the needles were renewed every three hours, to keep them sharp and clean.

The RSN’s work was used primarily for the train and skirt of the Bride’s dress, the bodice and sleeves, the Bride’s shoes and the Bride’s veil. 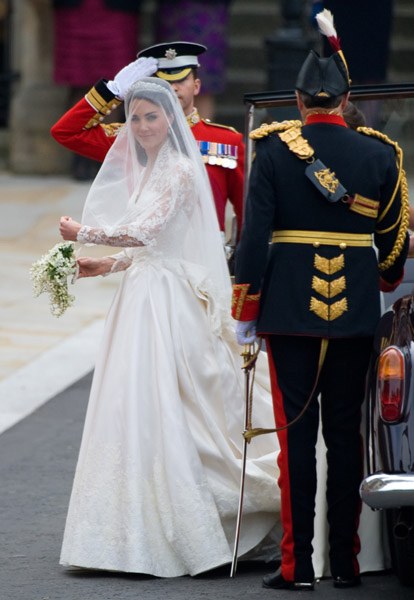 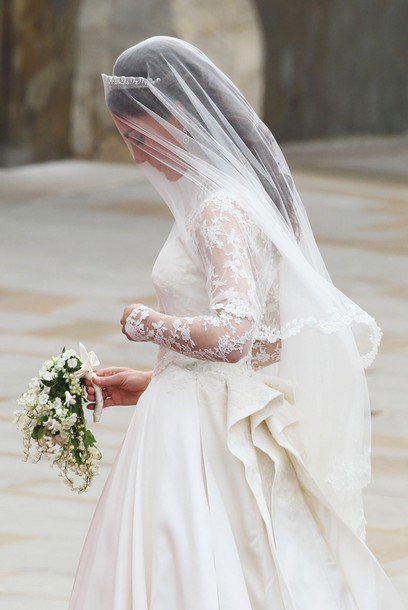 The veil is made of layers of soft, ivory silk tulle with a trim of hand-embroidered flowers, which was embroidered by the Royal School of Needlework. The veil is held in place by a Cartier ‘halo’ tiara, lent to Miss Middleton by The Queen. The ‘halo’ tiara was made by Cartier in 1936 and was purchased by The Duke of York (later King George VI) for his Duchess (later Queen Elizabeth The Queen Mother) three weeks before he succeeded his brother as King. The tiara was presented to Princess Elizabeth (now The Queen) by her mother on the occasion of her 18th birthday.

The Bride’s earrings, by Robinson Pelham, are diamond-set stylised oak leaves with a pear shaped diamond set drop and a pavé set diamond acorn suspended in the centre. Inspiration for the design comes from the Middleton family’s new coat of arms, which includes acorns and oak leaves. The earrings were made to echo the tiara. The earrings were a personal gift to the Bride from her parents for her Wedding Day.

A tourmaline and diamond pendant and matching earrings have been designed and made for Mrs. Carole Middleton. Two gold stick pins, one with a single gold acorn at the head and the other with an oak leaf, are also worn respectively by the Father of the Bride, Mr. Michael Middleton, and the Bride’s brother, Mr. James Middleton. 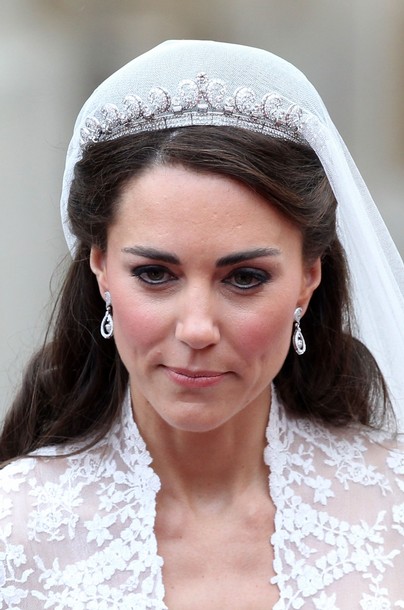 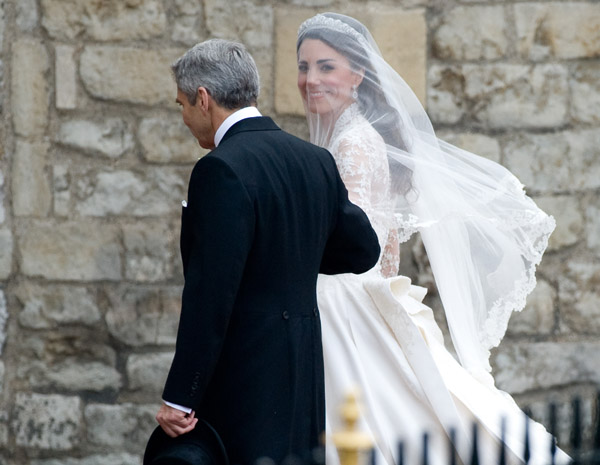 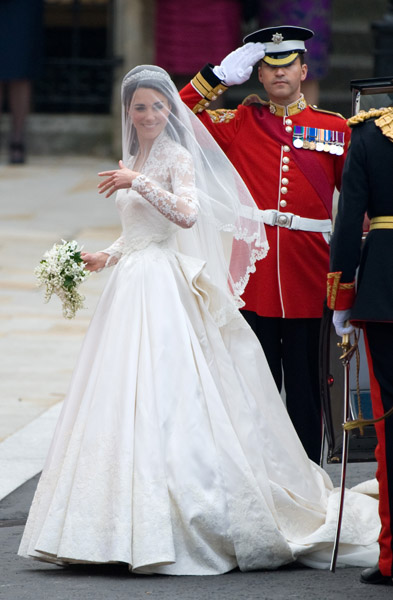 The wedding shoes have made hand-made by the team at Alexander McQueen and are made of ivory duchesse satin with lace hand-embroidered by the Royal School of Needlework. 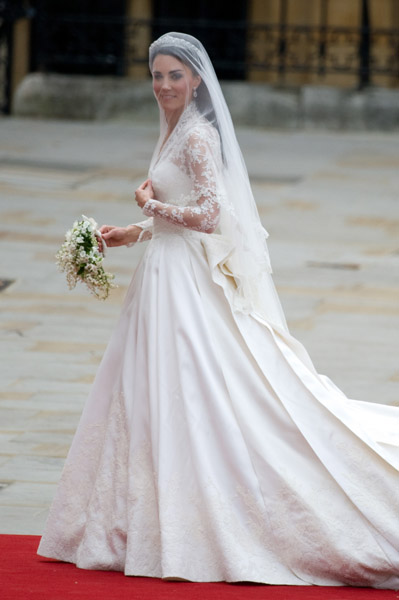 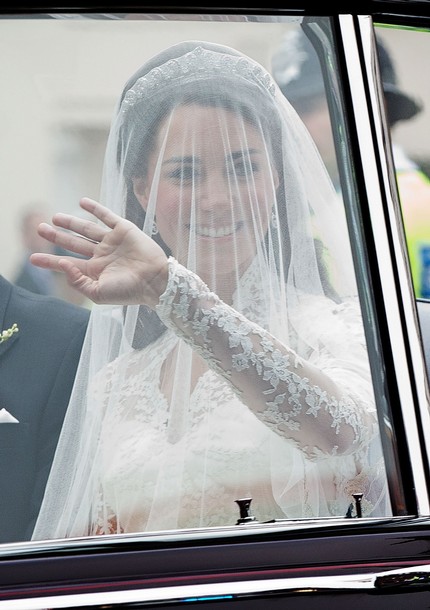 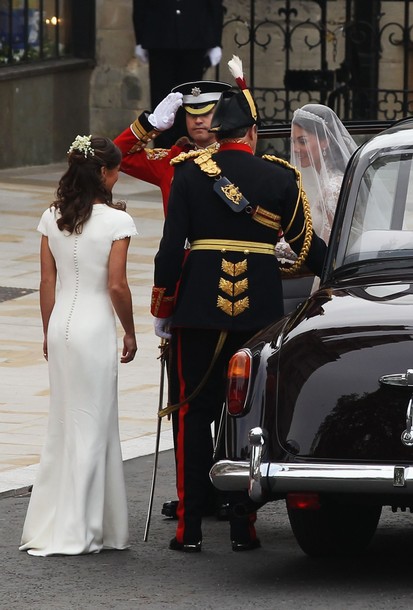 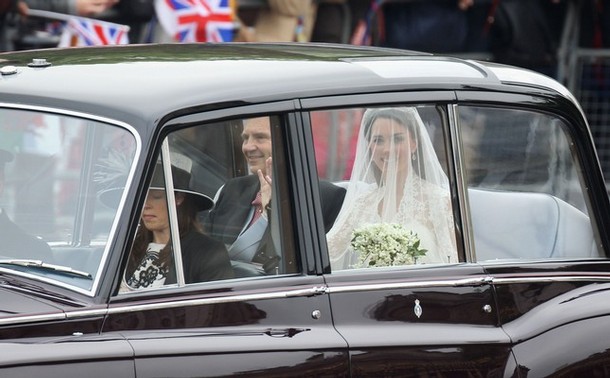 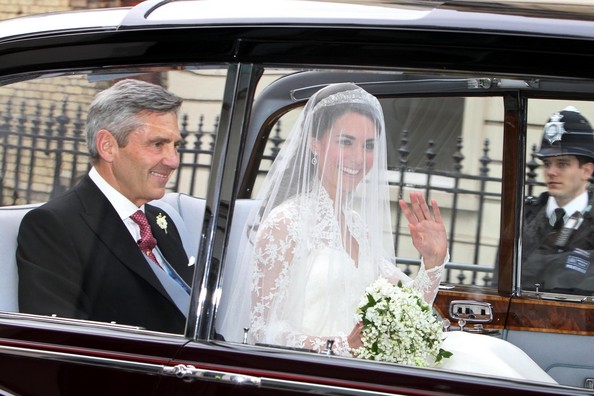 The bouquet is a shield-shaped wired bouquet of myrtle, lily-of-the-valley, sweet William and hyacinth. The bouquet was designed by Shane Connolly and draws on the traditions of flowers of significance for the Royal Family, the Middleton family and on the Language of Flowers.

The flowers’ meanings in the bouquet are:

Myrtle: the emblem of marriage; love.

The bouquet contains stems from a myrtle planted at Osborne House, Isle of Wight, by Queen Victoria in 1845, and a sprig from a plant grown from the myrtle used in The Queen’s wedding bouquet of 1947.

The tradition of carrying myrtle begun after Queen Victoria was given a nosegay containing myrtle by Prince Albert’s grandmother during a visit to Gotha in Germany. In the same year, Queen Victoria and Prince Albert bought Osborne House as a family retreat, and a sprig from the posy was planted against the terrace walls, where it continues to thrive today.

The myrtle was first carried by Queen Victoria eldest daughter, Princess Victoria, when she married in 1858, and was used to signify the traditional innocence of a bride.

Previous post:
All On The Line S1E5: Dana-Maxx Next Post:
The Royal Wedding: The Maid of Honour