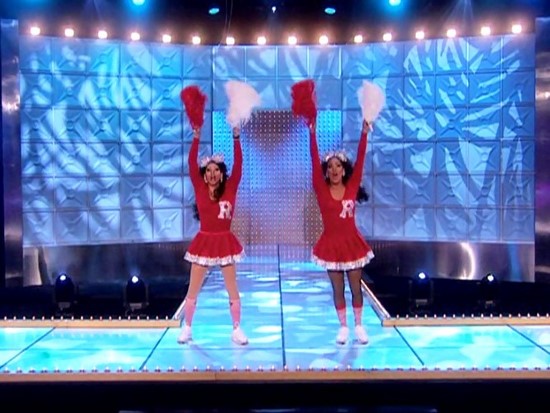 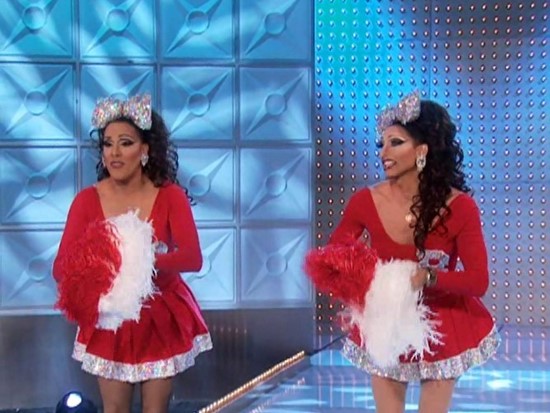 Did anyone else gasp when they came out? 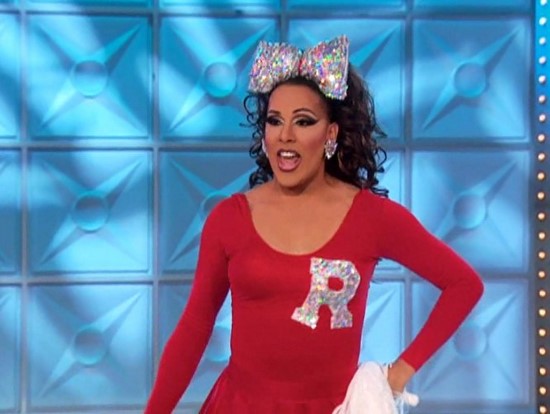 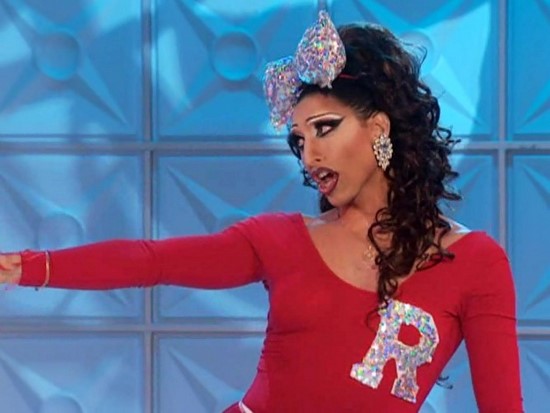 This was kind of interesting to us because, truth be told, we never really liked the face Alexis gives. Somewhere in the back of our minds we must have lumped her in with Shangela and decided she didn’t have the makeup skills. Well shut our mouths, because the bitch CLEARLY knows how to make up a face. 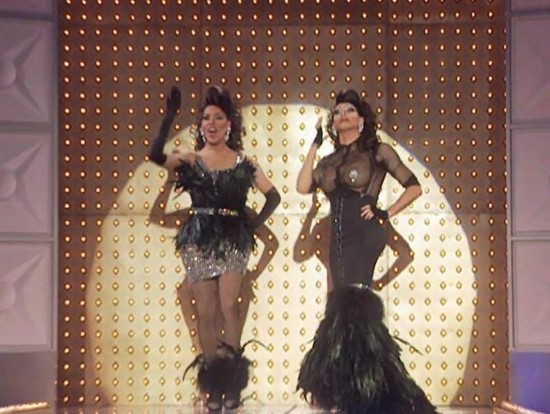 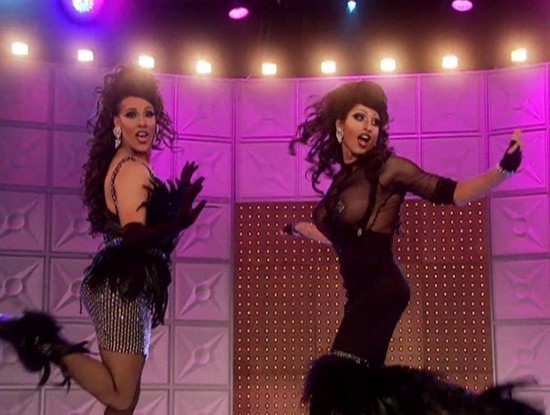 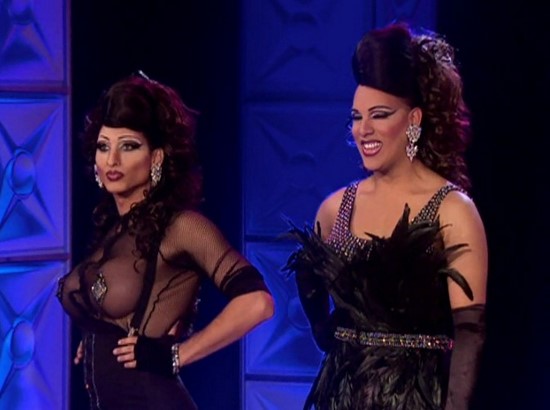 We really thought she had this one locked up. The cheer was hilarious, the energy was high, and they looked amazingly alike, all things considered. 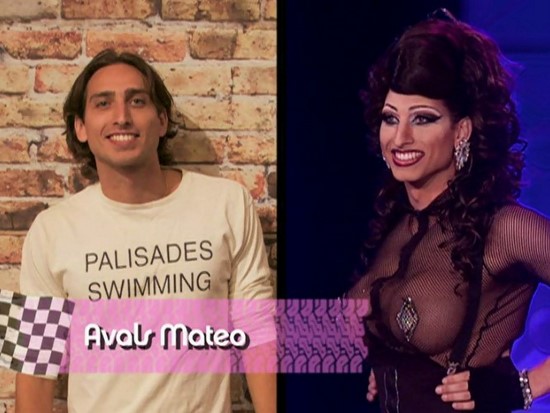 Alexis was full of shit when she tried to wave off any claims of strategy. She obviously and deliberately gave Raja the clumsiest and mopiest-looking guy out of the group and chose for herself the guy with the prettiest features. She lucked out in that he was really, really into drag. 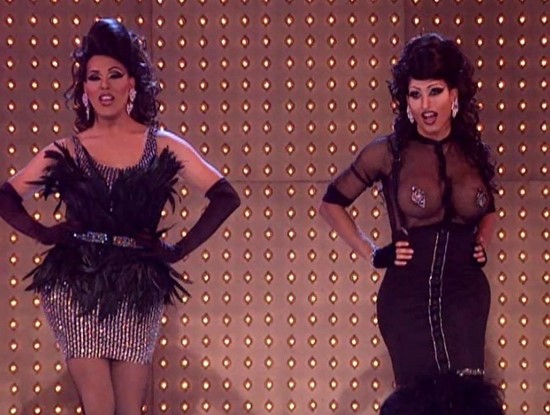 But ultimately, we think she didn’t win it because the judges are over her, well… lack of fabulousness. She did an amazing job on the makeup, but she’s wearing the same dress she wore last week and her sister’s look is another boobs-and-fishnet contraption. She’s never really been able to show the kind of gasp-worthy looks that a lot of the other queens have managed. 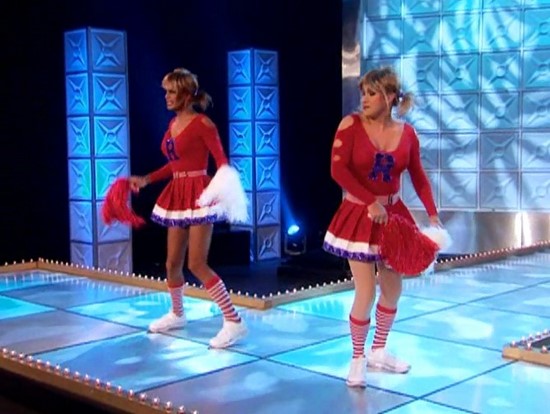 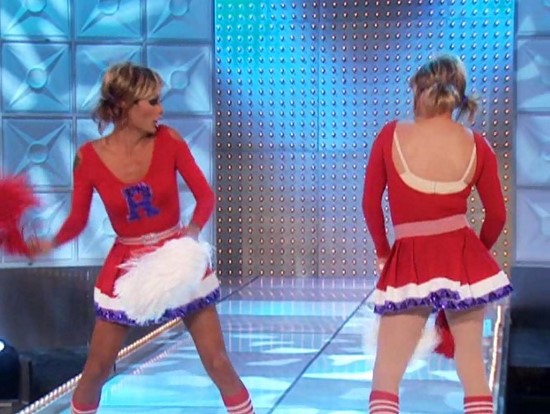 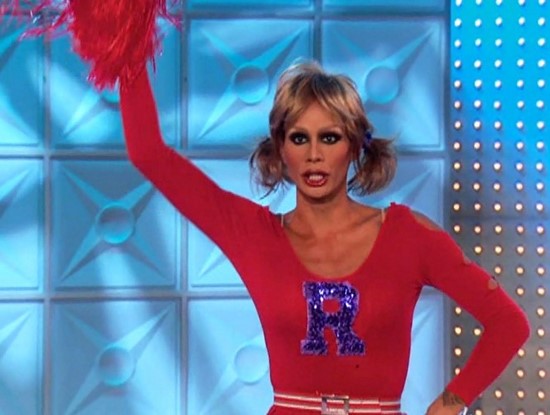 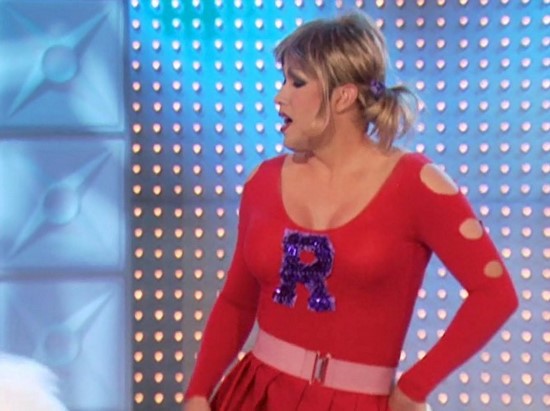 It became quickly obvious that Raja was doing all the work. 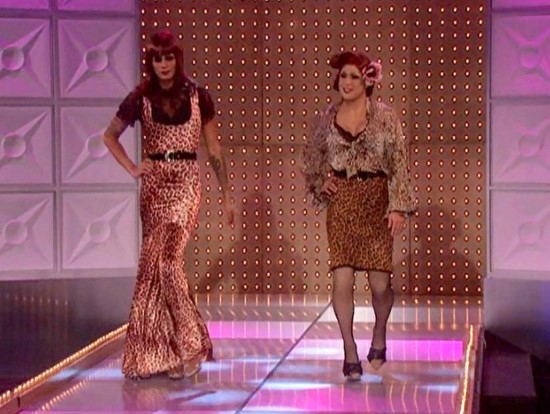 We weren’t really worried about her chances until the runway looks came out. We don’t know what the hell she was thinking here. 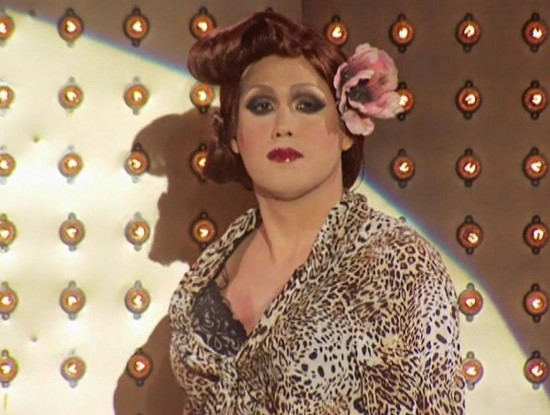 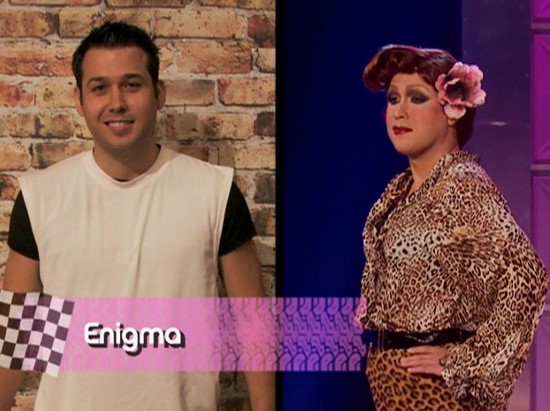 This is a getup that would look dowdy on just about anyone. We doubt Raja herself could work this look. So why did she choose it for a dude who’s already uncomfortable, doesn’t have any ability to work it, and doesn’t have a drag-friendly body or face? And speaking of faces, why is his so badly done? We would have thought Raja, out of all of them, would have the best chance of turning a dude into a swan with makeup alone. 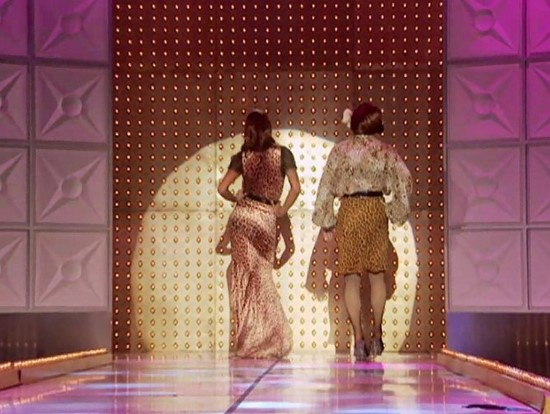 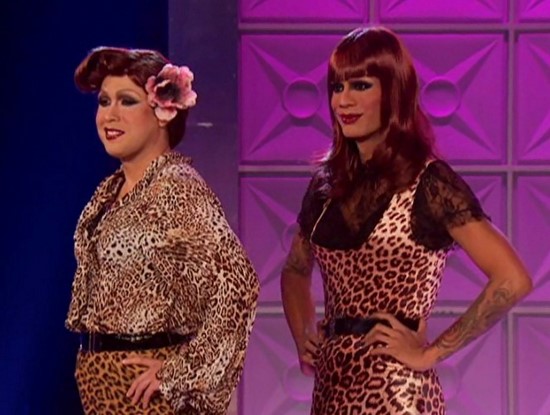 Worse, the look is TACKY. That’s about the last thing we would have expected from Raja. Even stranger is her own look, which doesn’t have any of the style or wit of … pretty much everything else she’s worn on the RC. It’s like she totally fell apart in the face of one man’s overwhelming heterosexuality. She got saddled with the worst of the dudes, but she could have done a hell of a lot better than she did here. She deserved to be in the bottom this week, we’re shocked to say. 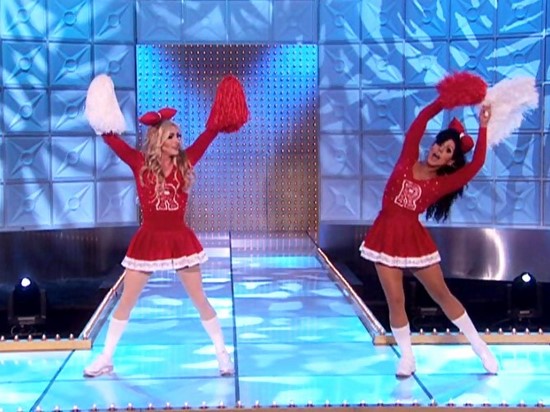 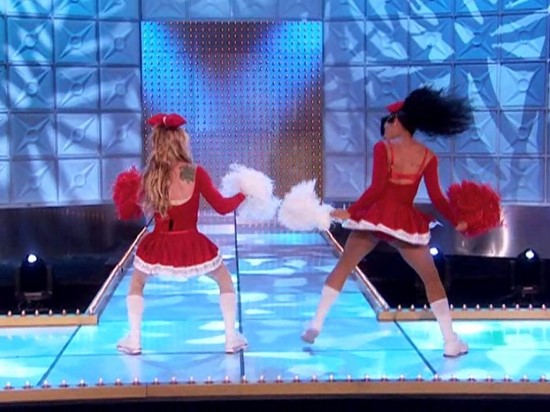 Their cheer was just okay, neither the best nor the worst. But we thought Yara made a really odd choice here. 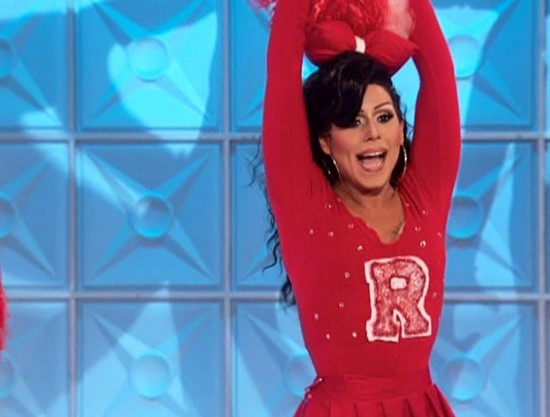 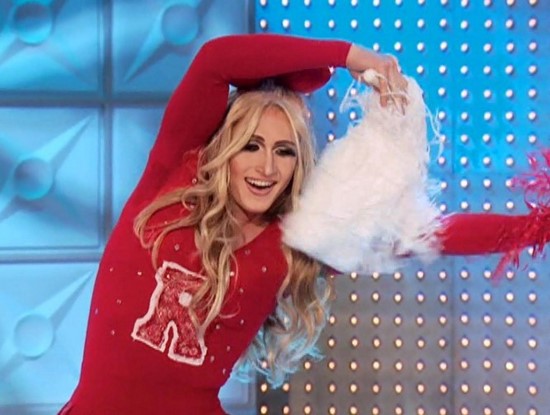 She did a fantastic job on the makeup, but why didn’t she try to make them look more alike? 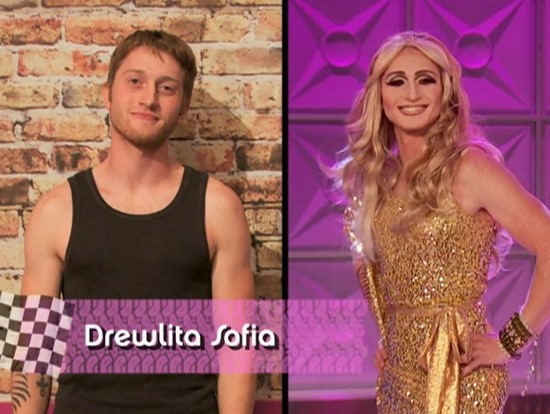 He has pretty drag-friendly features and his face is shaped the same as hers, so why go with two different hair colors? 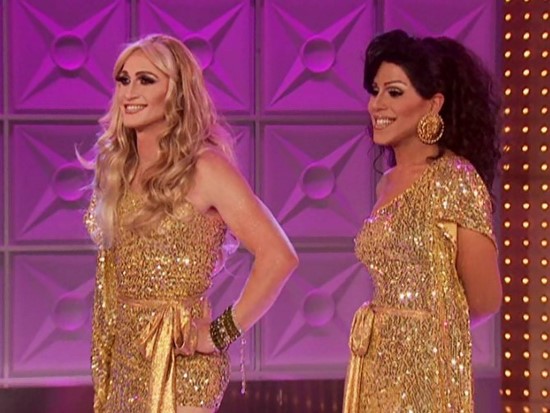 If Yara had been sporting her blonde hair, they would have been as impressive-looking as Alexis and her sister or even Manila and hers (even though the latter two really didn’t look alike either; they just had great rapport and great costumes).

And speaking of costumes… 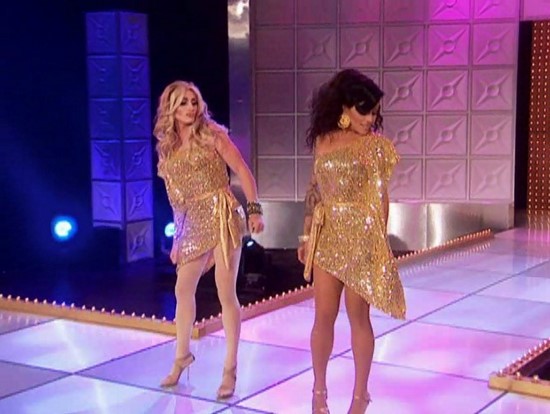 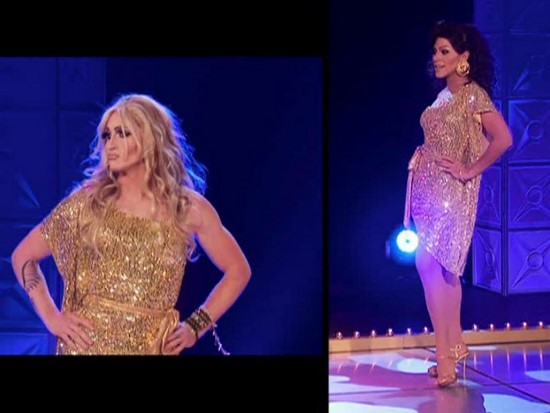 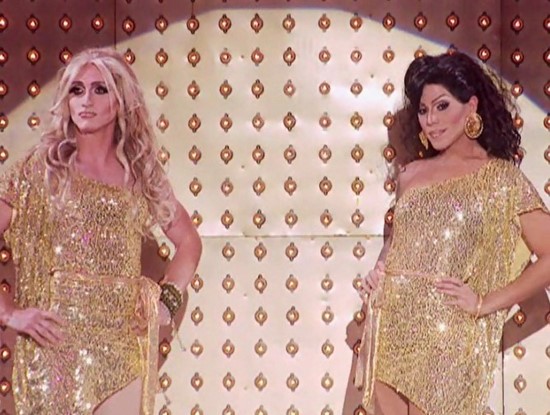 Considering all the crackitude Yara’s been sporting on the catwalk, we were severely disappointed by how generic these looks were. Once again, Yara does well enough to skate by, but not well enough to win or even place in the top. If we were the betting type, we’d say she’s next to go.