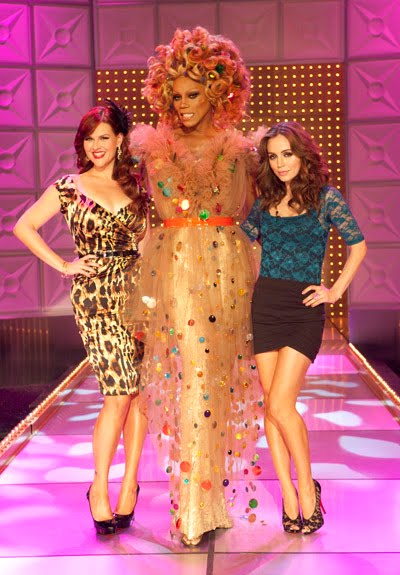 Gratuitous glamour shot. We love Sarah Rue for dressing the part. We love Eliza Dushku because she’s the cool chick in your high school who wears motorcycle jackets and smokes pot behind the bleachers while being way hotter than any of the cheerleaders. 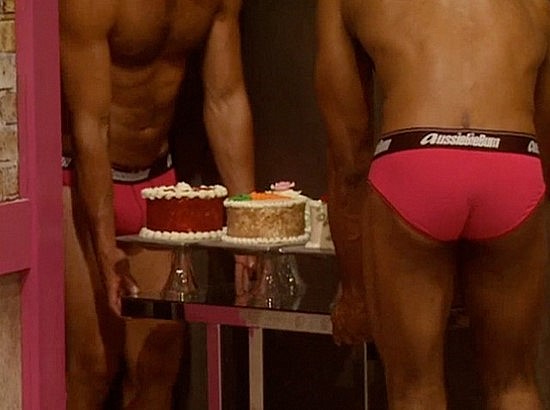 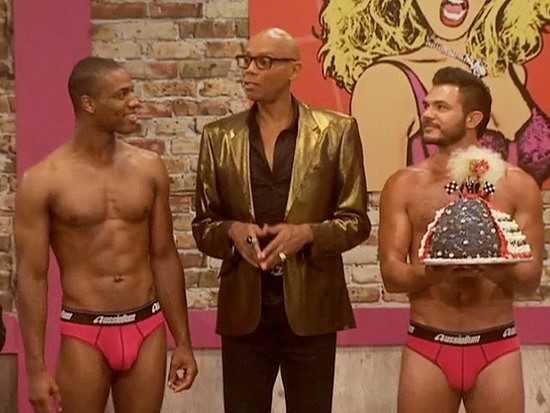 And we might as well follow it up with the bulges. Ru and Jane Lynch shop at the same stores, apparently.

OHMIGOD! Jane Lynch should be a guest judge! And she should do it in character as Sue Sylvester! In a sequined track suit! LOGO TV: This MUST happen next season! 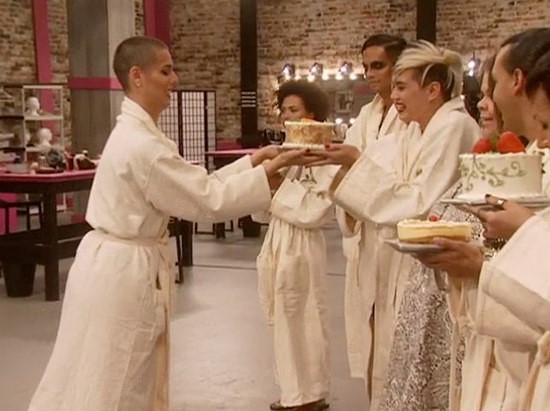 These bitches are really shredding each other as the pool gets smaller, aren’t they? Like a bunch of crabs in a barrel. That whole “Heathers” thing was eye-rollingly obnoxious. It would be one thing if the queens were having campy fun with it, but they were literally sitting around preening about how they’re so much prettier and more popular than the other girls. Even if we buy that, say, Manila and Raja (who both have pretty sharp and wicked senses of humor) were playing it up, Delta seemed to buy the “I’m one of the popular girls” sentiment, hook, line and sinker. Yes, Shangela is annoying as hell and needs to learn that “keeping it real” while shooting your mouth off is the quickest way to get yourself ostracized from any group, but Delta really went after her on Untucked. Raja has a history with her and, at least on the surface, a dislike of her performing style. Delta just wanted to fight with someone and declare her popularity. It all got to be a bit much. In fact, the challenges seemed incidental to the drama. Maybe because the challenges were a bit off. Drag superstars don’t generally pose naked or make cakes, so both the challenges and the results didn’t really interest us all that much, although we really didn’t think Carmen deserved to win the picture challenge: 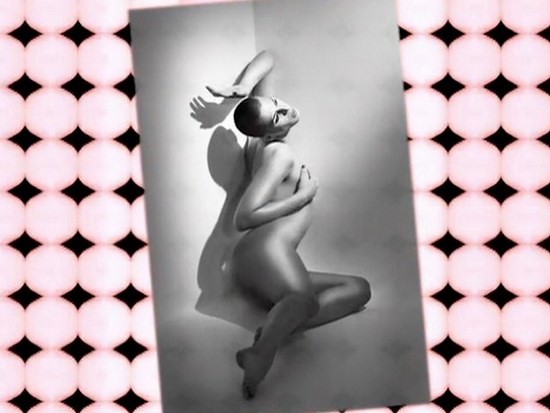 It was just all right. We thought the position of her leg looked odd. 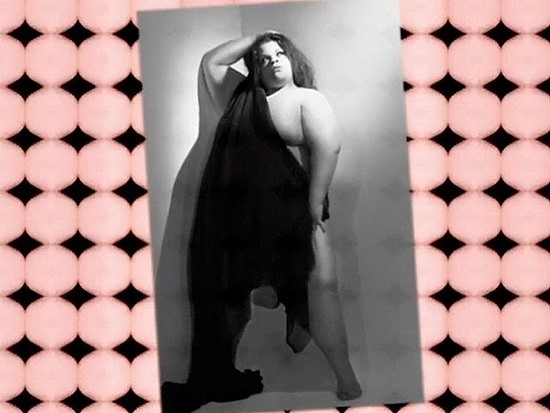 All things considered, she did okay. 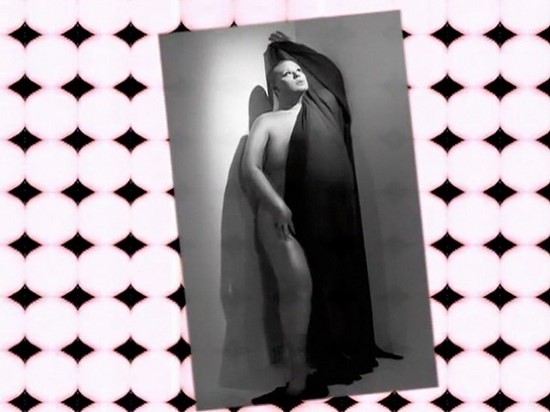 Delta Work
Both of the big girls did, and we were proud of them for having the courage and learning to have fun with it. 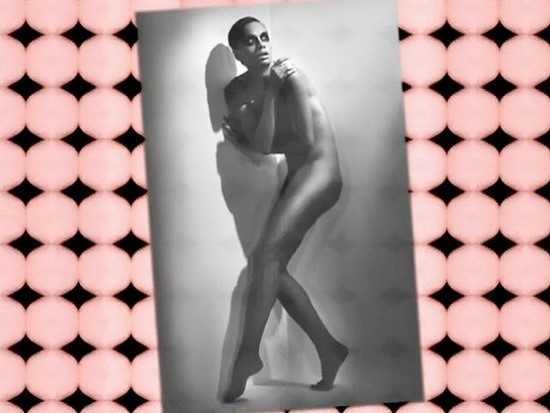 Raja
To our eyes, Raja was the obvious winner here. She just knows how to model on a level far beyond any of the other queens. Ru is a wildly inconsistent judge and it’s pretty obvious that, while talent is part of the equation, the winners of each challenge are pretty much at the mercy of Ru’s whims. 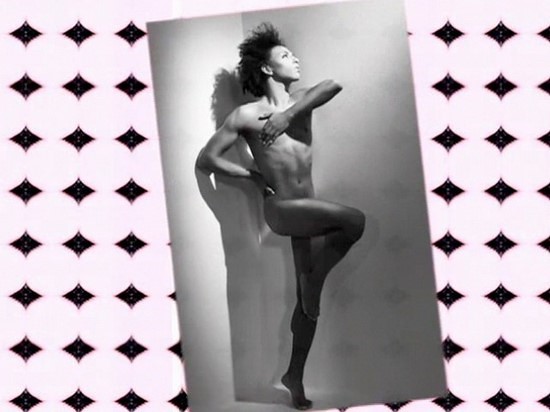 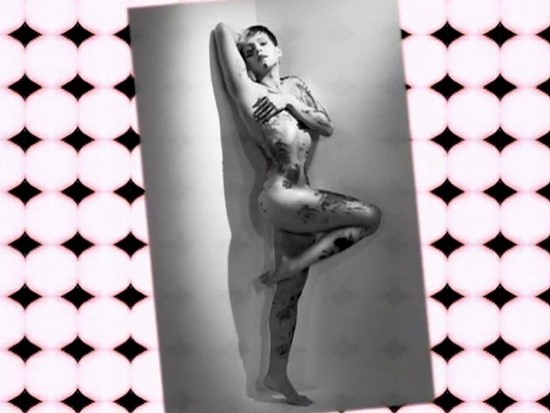 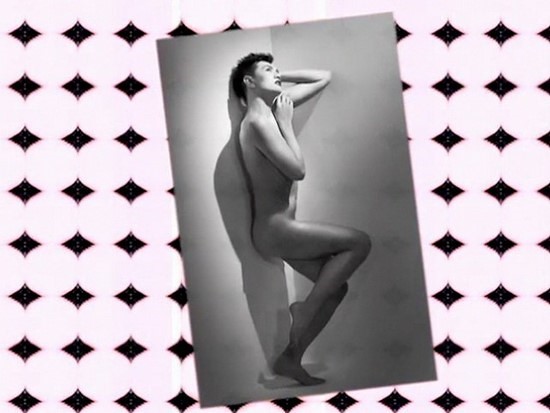 Strangely, and disappointingly, bad. She looks like she’s trying to squeeze herself into the corner out of embarrassment. 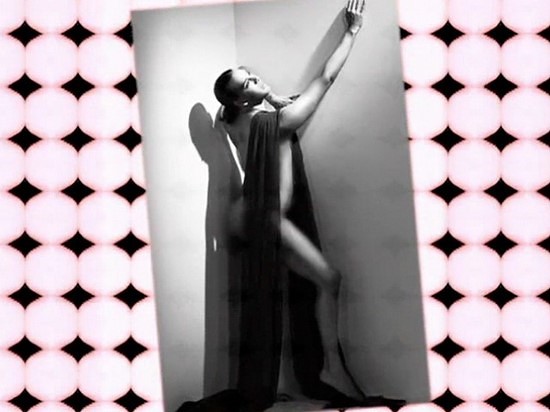 Alexis Mateo
Pretty good. Best use of the fabric.We suppose the argument could be made that the point of this challenge was to see how well the contestants can evoke their drag personae without the use of the typical tools of drag. So, okay. It makes sense. But you can’t get us to buy the cake challenge and you can’t get us to believe that anyone other than Raja should have won the picture challenge. 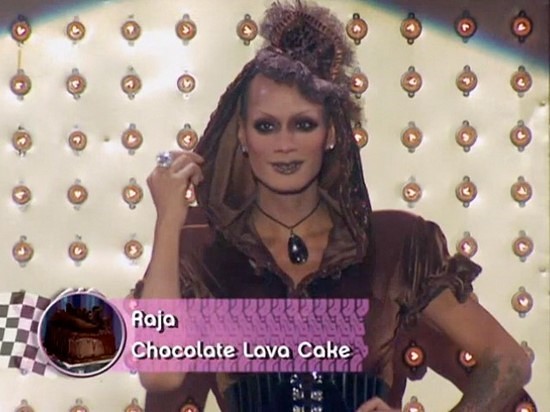 We could shrug off the picture decision but we were going to throw pillows at our TV if Raja didn’t win the runway. 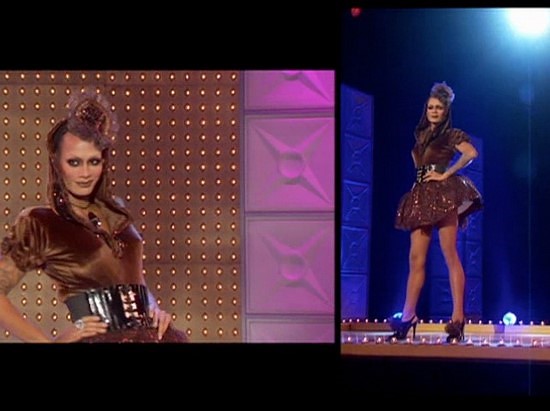 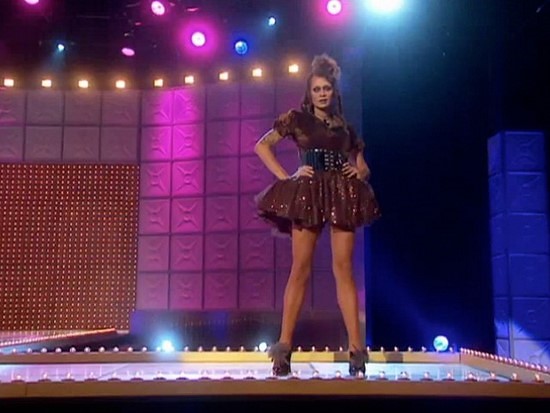 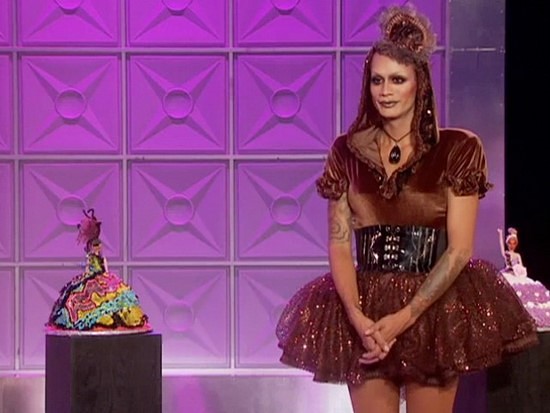 Yes, her panniers were showing and we were kind of annoyed with her blase attitude about that, but the overall look TOTALLY fulfilled the dictates of the challenge and then some. This is the most “couture” of the looks on the runway and looks the most like the cake that inspired it. 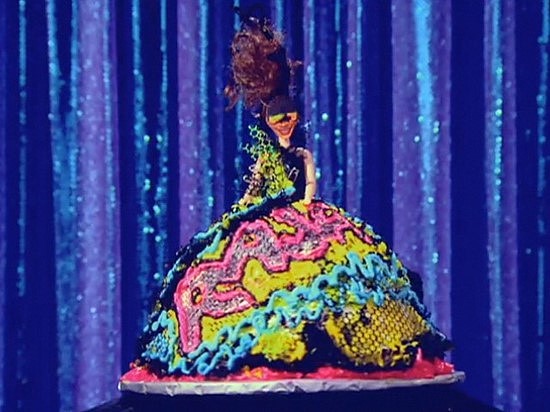 Plus the cake itself was cool. 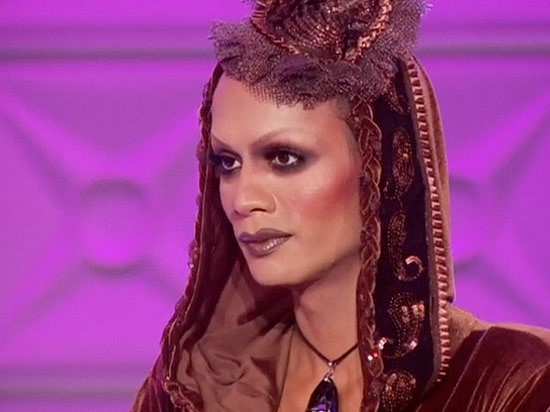 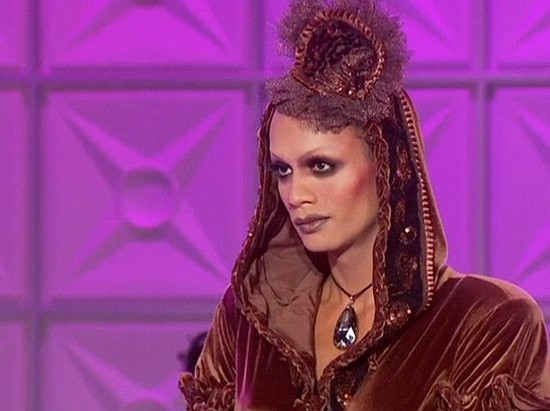 But we agreed with Billy’s critique that her makeup, while impeccable, could have been a little less ghoulish. She defaults to that skeletal smokey eye too much. And it’s Sashay away for Miss Stacy Layne Matthews. She seems like a very sweet queen who lets her self esteem get the better of her now and then. She never seemed like a possibility for the finals, but she did pretty well, considering her lack of confidence and lack of polish. 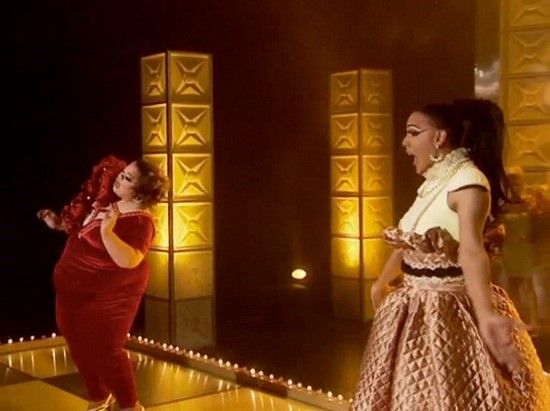 It was obvious before the music even started who was going to win this lip synch. At her best, Stacy is an unsteady performer. 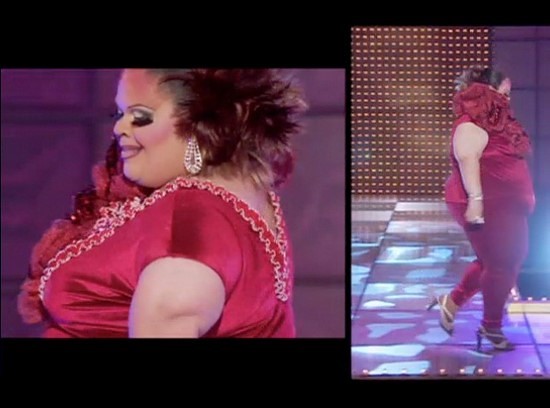 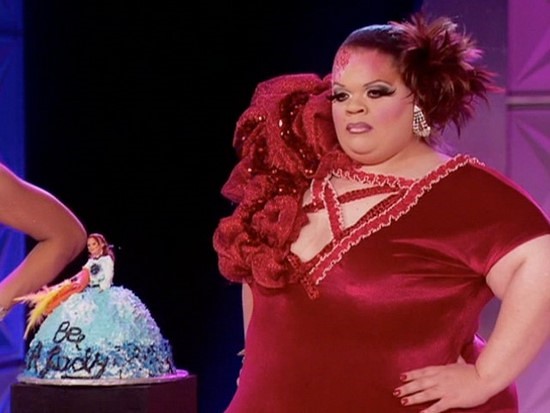 We didn’t mind the top of this look. It was at least paying lip service to the idea of a couture look. But making stretch pants for the bottom is what ultimately killed it for her. We have no idea what kind of career she has in North Carolina, but Ru expects her queens to have some reference points for fashion, performing, and pop culture. Stacy couldn’t mimic a couture look because she had no idea what Ru was asking of her. 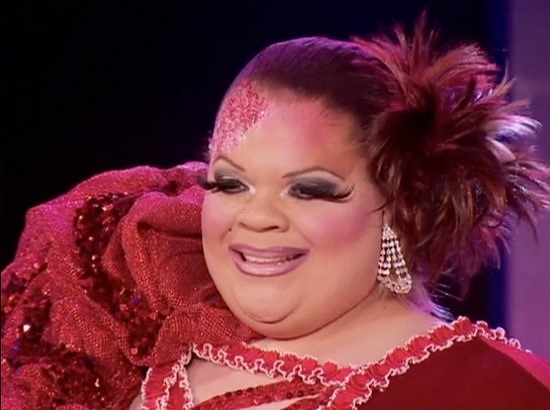 And why does her face look so half-assed this week? She’s come out looking a lot more sparkly and done up than that. 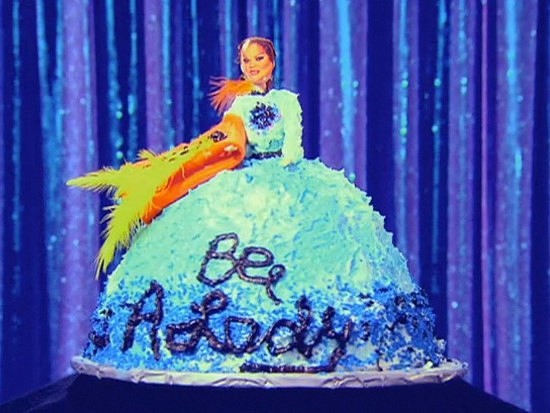 But we thought the message on her cake was sweet, and except for a few times when she was desperate for an ally and found one in the smack-talking Shangela, Stacy managed to be a lady throughout the competition and left like one.