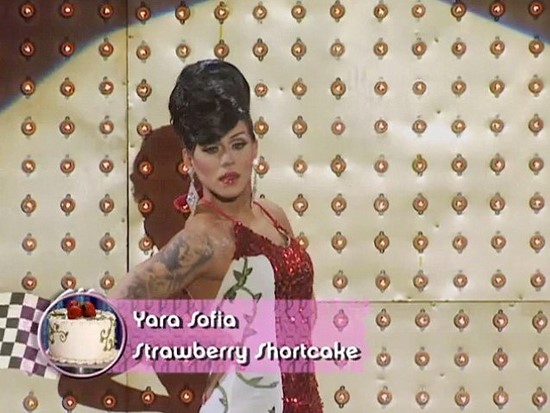 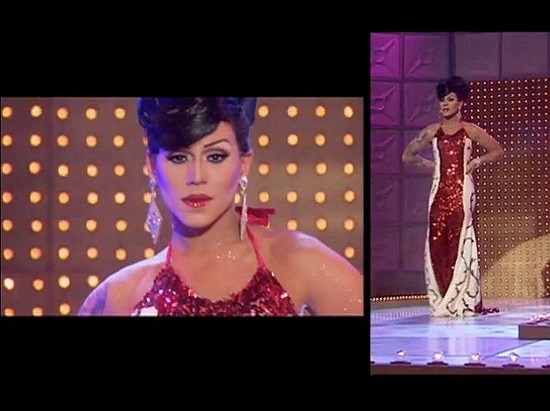 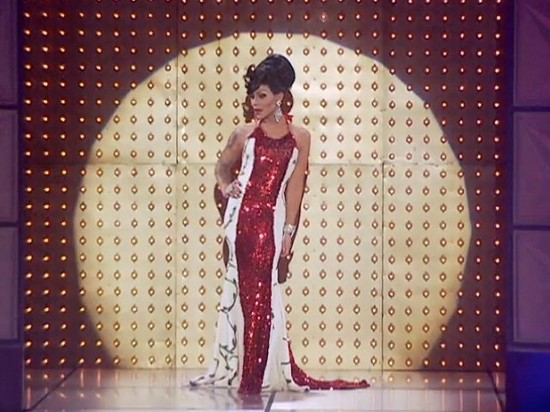 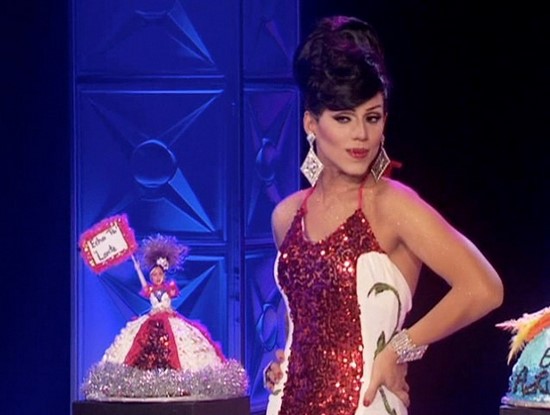 We thought this deserved more praise than it got. The bitch really can sew, can’t she? Toned-down is a good way to get yourself kicked off this show, but she’s been wearing so many outrageous looks on the catwalk that we appreciate her doing something a little sweet and for once adding a little realness to her look. Plus, no freaky colored contacts! Also we loved how she kept her mouth shut through the entire Shangela debacle. She and Carmen were the only queens who got out of that one unscathed. 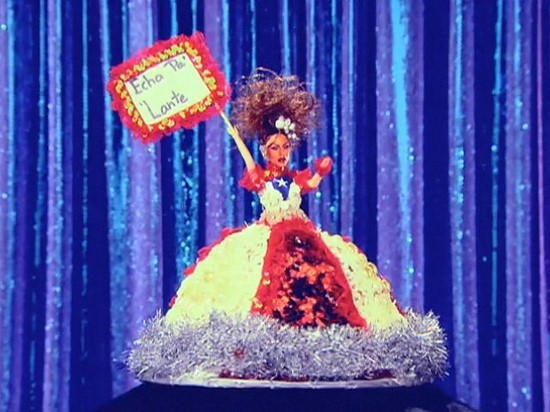 We’re not even going to judge the cakes. No one else did. But this was a cute (if highly inedible-looking) attempt. 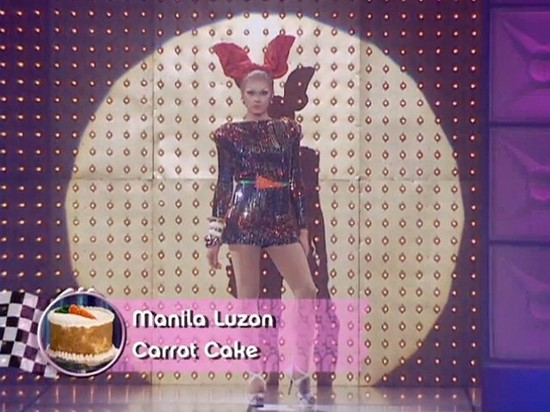 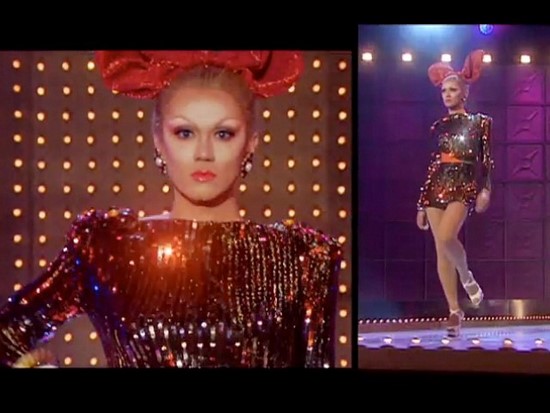 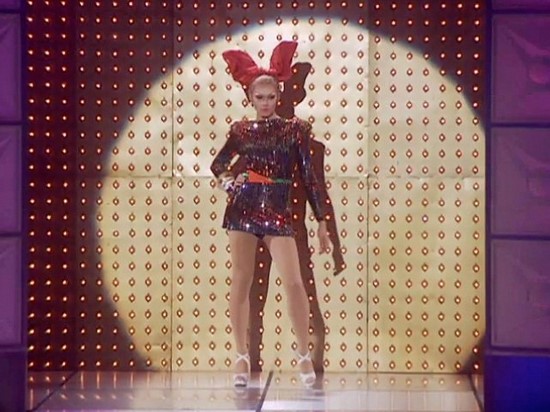 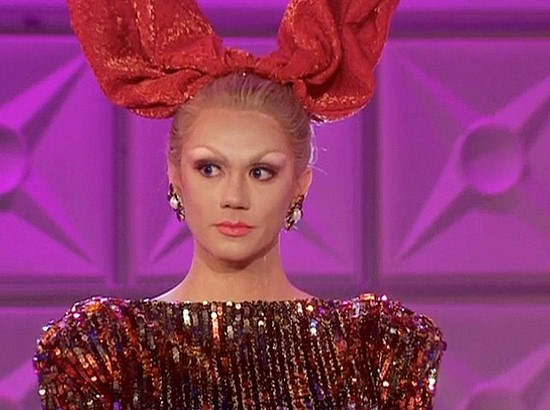 We laughed out loud when she came out in the Louis Vuitton knockoff rabbit ears as a way of interpreting a carrot cake. We like this look, but we’re not sure blonde is the look for her. She doesn’t have to do her stereotypical dragon ladies all the time, but she’s just not built for a blonde haired, blue-eyed look. We suspect that’s part of the reason her makeup looks so bad, but to be honest, she has the same racoon face when she does her “regular” drag face. 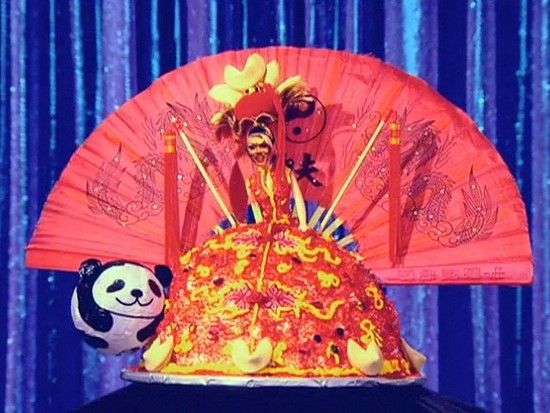 She’s beating the Asian thing to death, but we admit, we laughed at the panda. 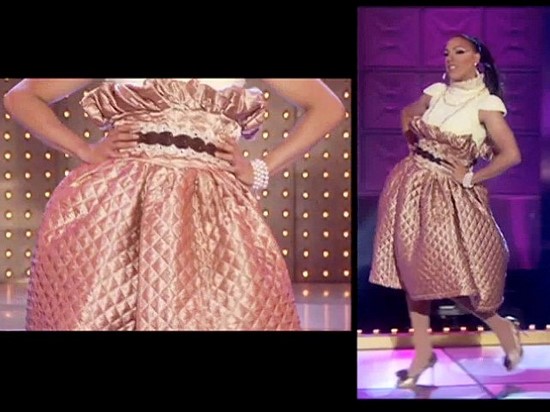 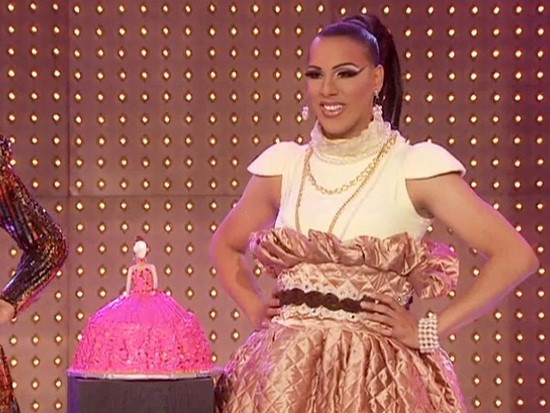 We were a little befuddled by the judges’ reaction to this. Of all the looks except for Raja’s, this came closest to couture. Of course it’s weird and clumsy and high-waisted; that was kind of the point, wasn’t it? To parody the excess of fashion? Given some of the full-skirted, high-waisted things Prada and Marc Jacobs (among many others) have sent down runways in the past couple years, we thought she nailed it. No, it’s not pretty, but it is funny, if you know what she’s referencing. 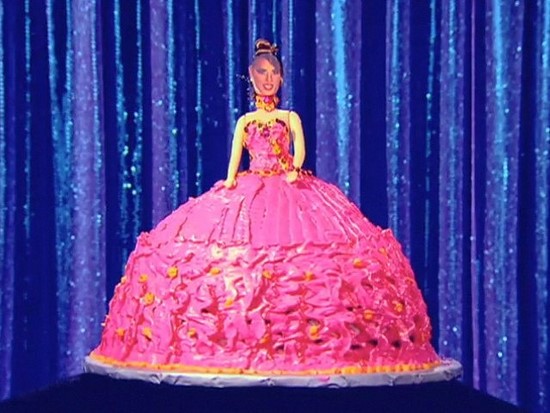 A quinceanara cake. How expected. 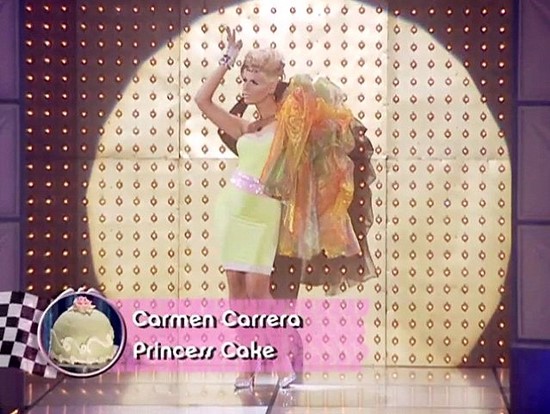 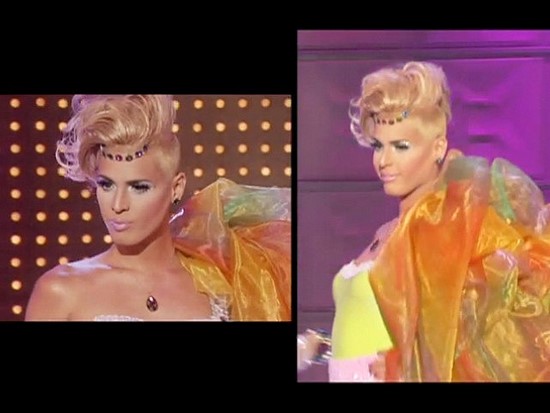 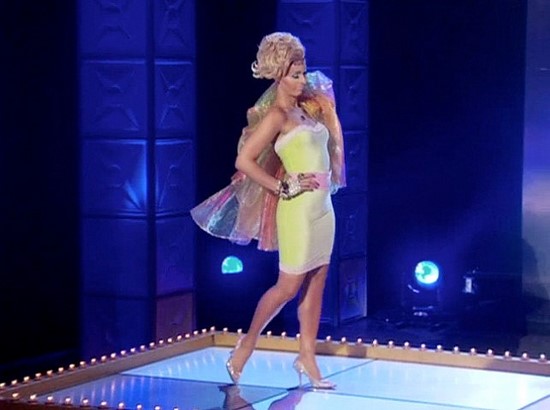 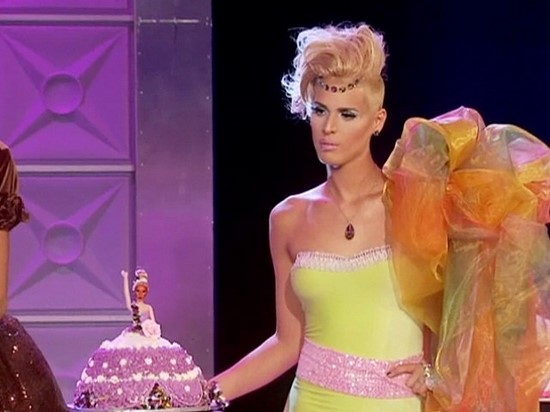 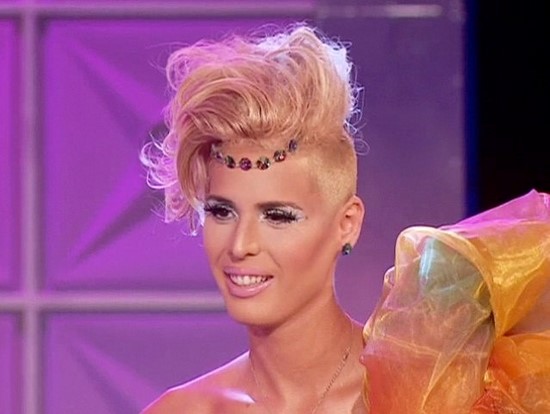 This is the best look she’s ever put together. We finally see that “New Jersey” thing Ru is always going on about with her and we can see its value as a drag persona. She looks like she should be on The Sopranos. This is also the most real she’s looked yet. 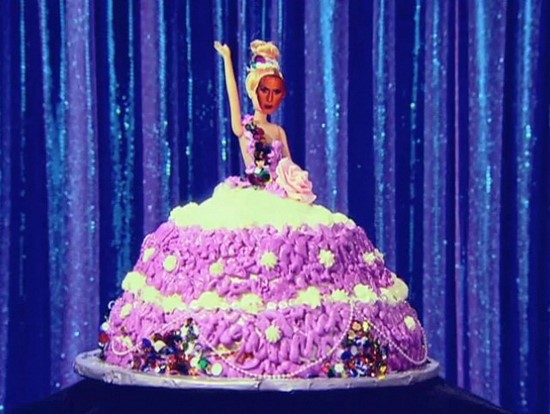 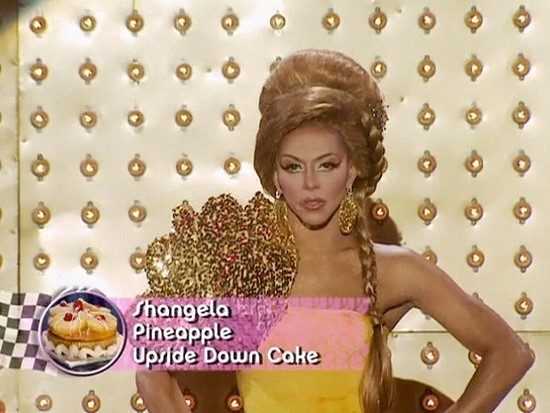 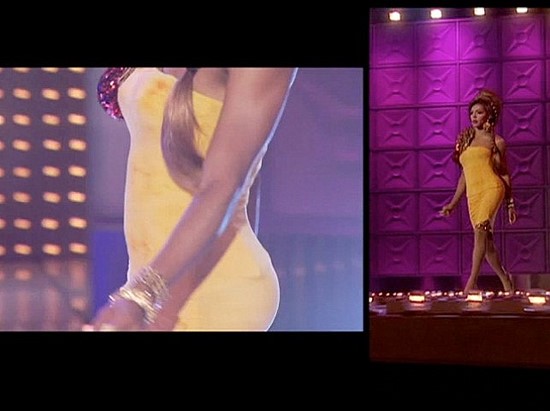 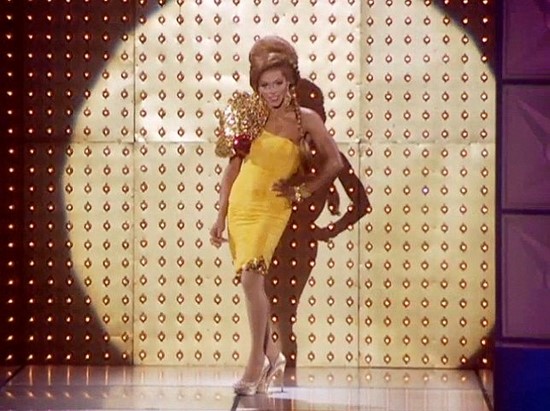 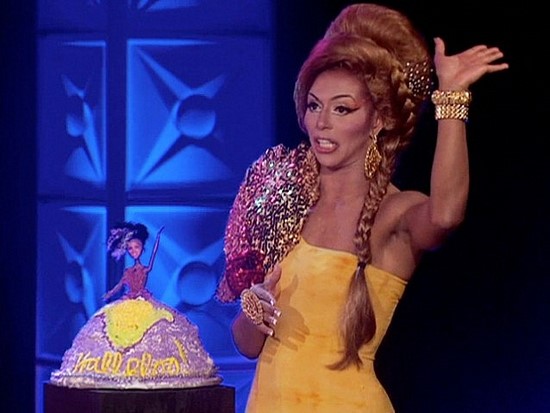 We didn’t really get what that big glittered thing on her shoulder was supposed to be. We see red for cherries, but what’s the big fan-like thing? That ain’t no pineapple. We also don’t get the wig here at all. And really, it’s about time the judges consistently call her out on her makeup instead of just once in a while. Every week, her face looks hard, sloppy, and unfinished. We think she’s a performer with a lot of potential, especially given her lack of experience, but man, does she lack polish. And apparently skills, if the editing is to be believed and she’s asking for as much help as it seems. In fact, what was up with Auntie Ru telling her to ASK for help from the other queens? Just like with Stacy Layne, there’s too much hand-holding with this one. Raja can be blunt, and even be a bitch, but she wasn’t saying anything we disagreed with. We’d feel a lot more kindly toward Shangela and argue for her potential if she wasn’t such a loudmouth and an ungrateful bitch. If she’s really getting as much help as it seems, then who the hell is she to be criticizing everyone around her? 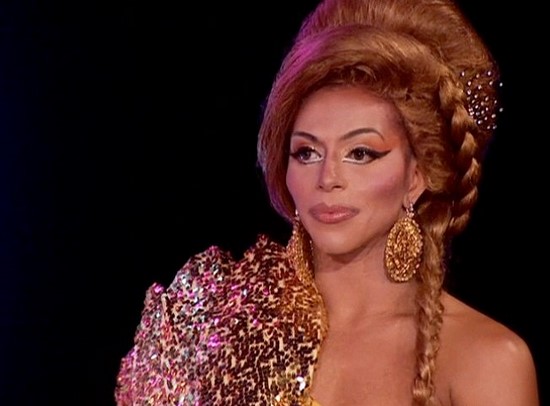 Bottom line: she’s a drama vortex, which is way worse than a drama queen. She is constantly circling around, looking for the next offense or the next person to judge. When Raja, Manila and Delta tore her down and left the room, she immediately zeroed in on Stacy – the “weakest” in the room – and started up an entirely new round of drama with herself once again at the center of it. Haven’t we all known people like this? Tired. 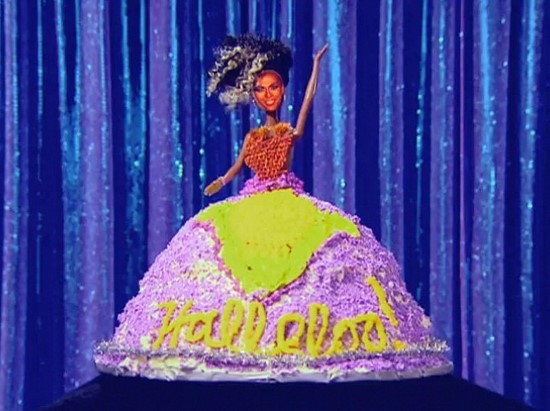 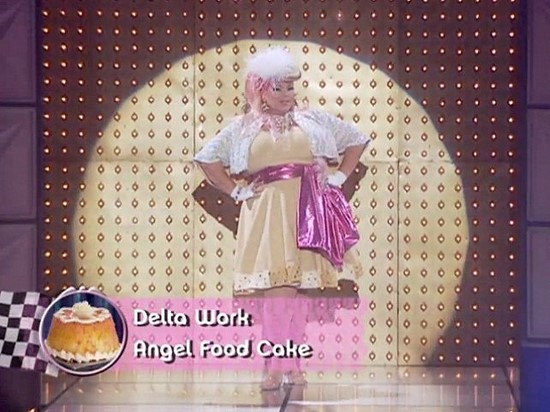 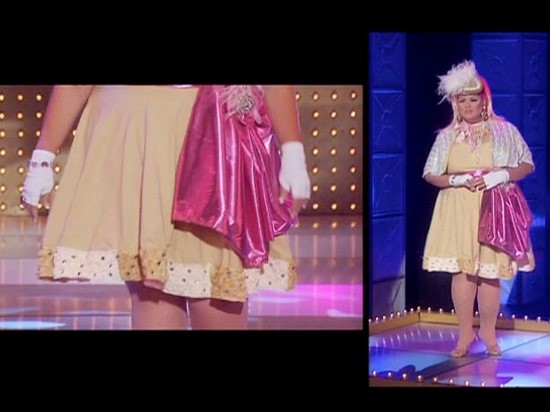 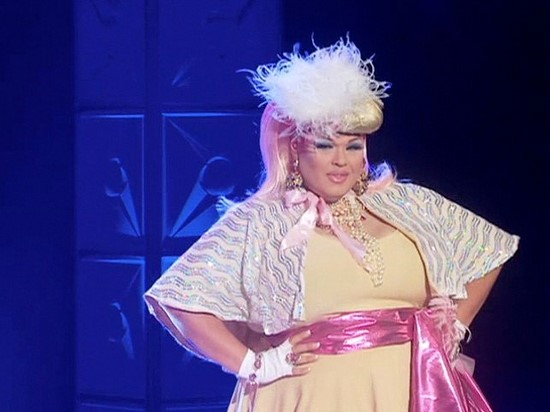 We don’t get this. Taken on its own merits, it’s a fun drag look; cute even. But Delta told Ru that she wanted to work a younger look. So she chose a teenager’s look from 50 years ago? That only says “young” to people in their seventies. Besides, it really doesn’t say couture. Then again, neither did Yara’s or Shangela’s looks. Or even Carmen’s, for that matter. 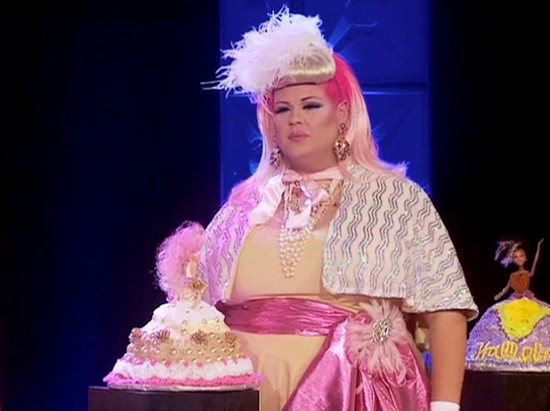 But the real story here is that Delta let the competition finally get the better of her this week and wound up saying things that had us cringing in embarassment for her. As we said in the other post, she really seemed to believe this whole Heathers thing. She was taking it seriously. And sure, it’s understandable that she’d want to put Shangela in her place a bit, but this “I’m POPULAR. And PRETTY!” bit was revealing a bit more about her insides than she probably wanted. And besides, you’re not doing all that well, honey. It’s not like you’ve been dominating the competition and you’ve earned the right to brag. You’re hanging on just like Shangela is. 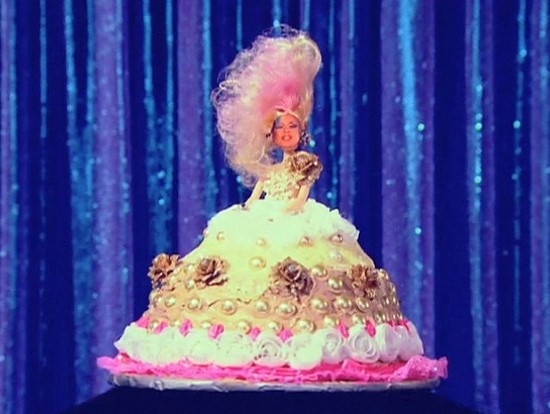 And your cake looks inedible.