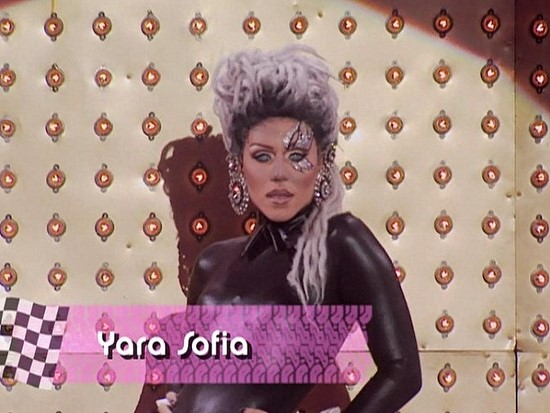 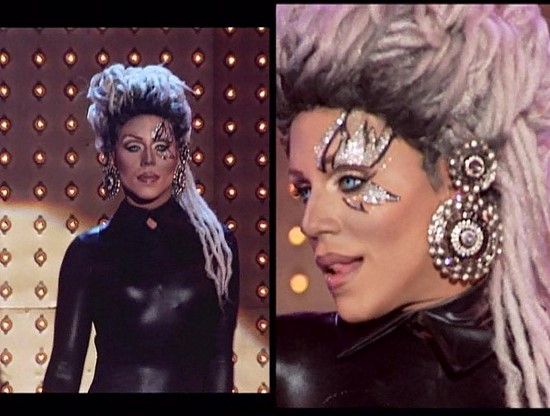 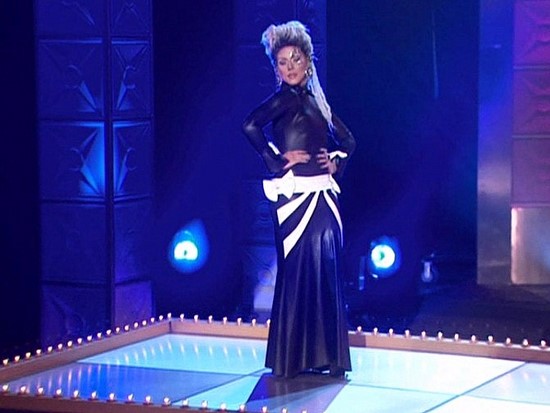 We want to give her credit here, because the dress and the hair are pretty amazing, but we also want to shake her Christina-Crawford style and yell “NO MORE COLORED CONTACTS!!!!” Also, the birthday party face-painting has to go. 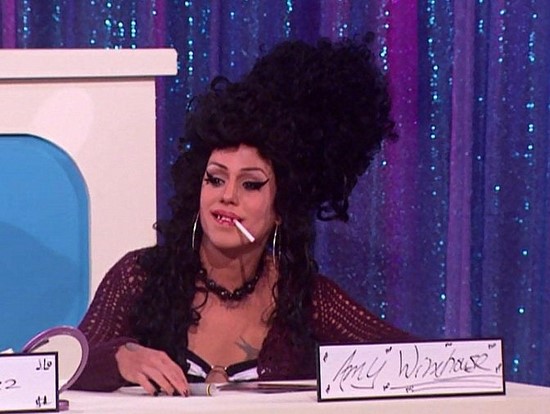 And while her Amy Winehouse was kind of funny, that had more to do with the fact that it was so bad an impersonation. Still, we like Yara for always being so game and her performance was on the so-bad-it’s-good line. 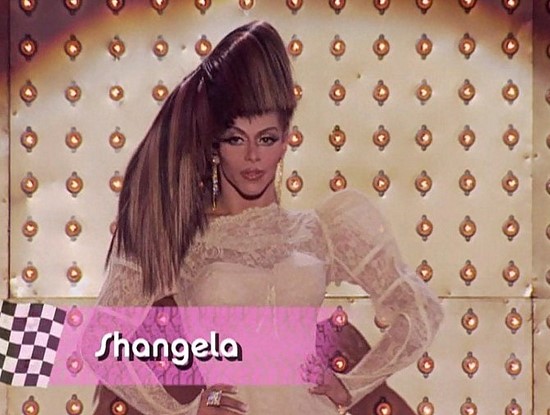 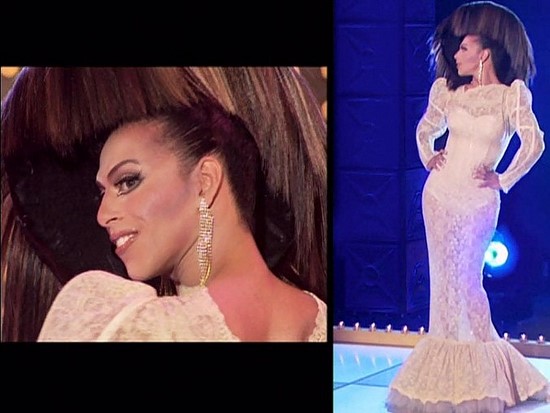 We don’t know…it’s a striking look, but we can’t say we love it. The hair is just weird and the dress looks decades out of style. 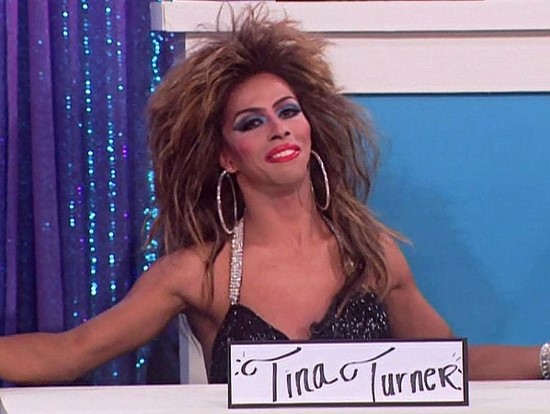 It’s possible we’re just being harsh on her because we’re so sick to death of her running her damn mouth off. We get it; it’s secured her camera time and besides, we don’t really buy any of the drama on this show. Drag queens are all about the artifice, so we do tend to take all the backstabbing with a grain of salt. Still, she was obnoxious this week. Tone it down, girl. There’s a funny way to do me-first smacktalking, but there’s also a tiresome, loudmouthed way to do it. Guess which one you chose. 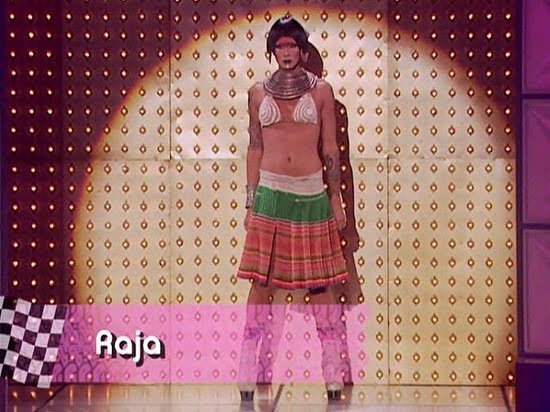 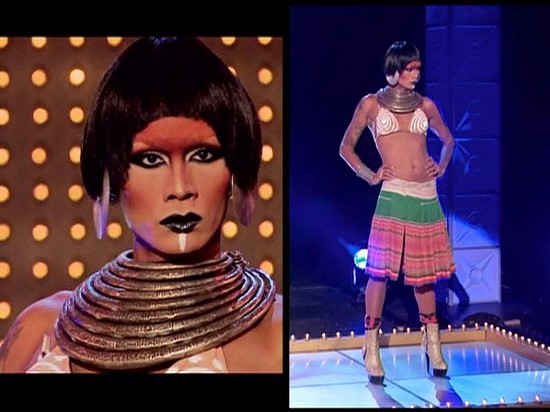 We get the complaints about Raja’s style of drag. No matter what, you never really lose sight of the fact that it’s a man in a dress. Now, drag queens are not female impersonators necessarily and the gender illusion thing isn’t for everybody, but there’s a strange disconnect because Raja’s looks are usually so creative and visually interesting, like this one is, the effect is hampered by her stomping all over the runway. She’s not required to affect a more feminine (or stereotypically feminine) persona, but it’s a shame she doesn’t because the bitch has style oozing out of her pores. This was a phenomenally creative look. 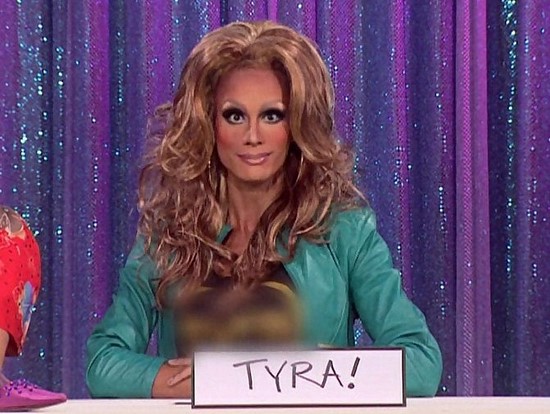 We didn’t think her performance was comedy genius or anything but it was funny and she really went for it, which isn’t something you can say about most of the performers this week. We think she should have won it. The smizing joke might have been beaten into the ground and her runway look would have been better served with a touch of realness, but we stand by our opinion that she’s really the one to beat. 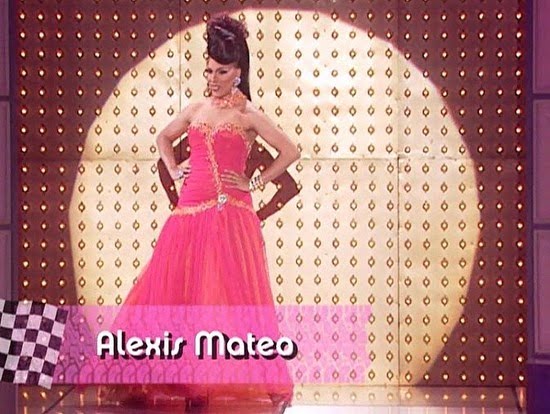 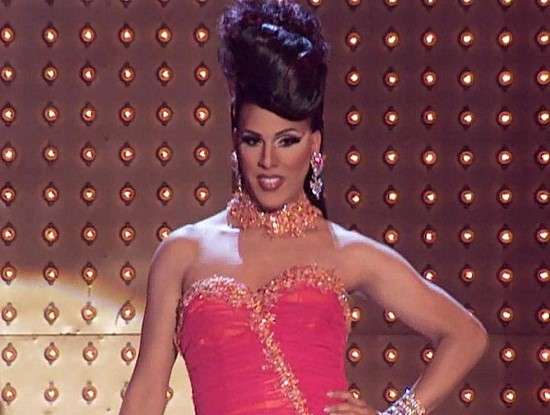 Tacky. Even for a drag queen. It’s Quinceanera Barbie. The thing is, it could have been funny if she really tried to go for that joke; really done herself up as a Hispanic Barbie. As it is, it’s just Alexis in another tacky dress. We’re not feeling it. 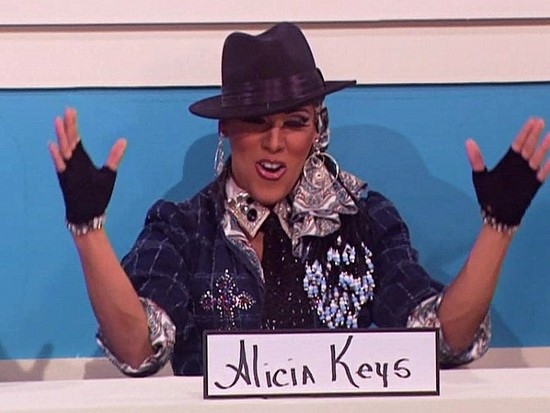 But her Alicia Keys was funny and like Raja, she really went for it. If her runway had been a little more interesting, we might have picked her for the win. 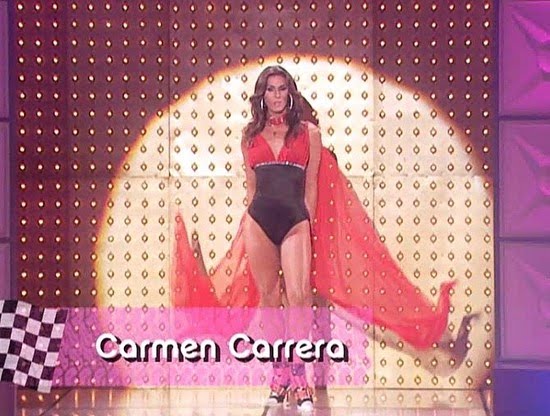 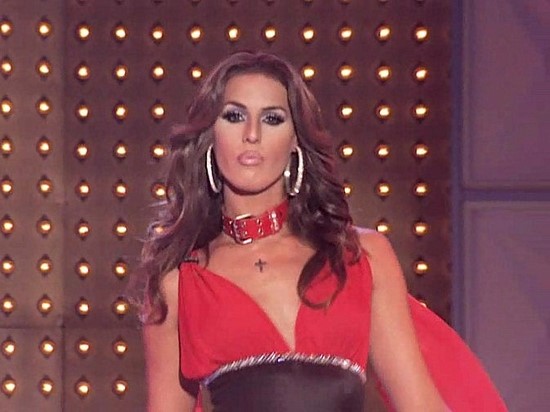 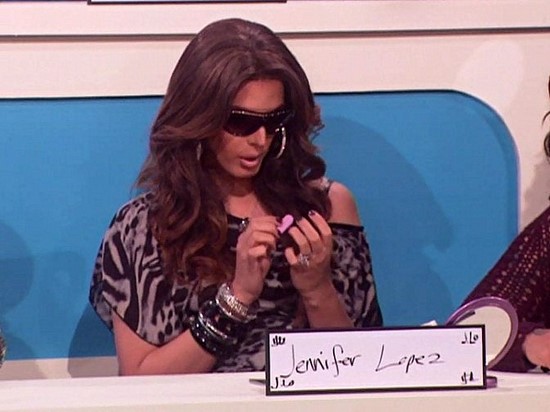 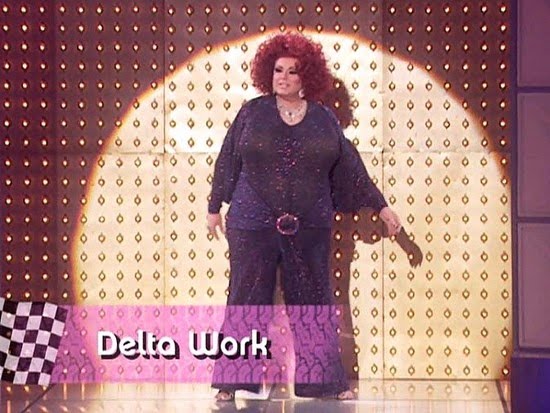 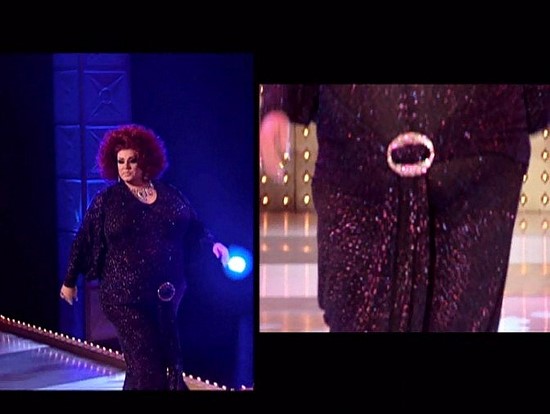 We go back and forth on this look. While we agree with her that her outfit was a better, more stylish way for a big girl to present than Stacy Layne’s cruise ship look, it’s still a sequined pantsuit. We’re not saying you can’t jazz it up and to be fair, she really does look pretty good, but still. A pantsuit. Actually, the more we think about it, the more it becomes obvious that the only reason she looks good to us is because this is her best hair and face yet. 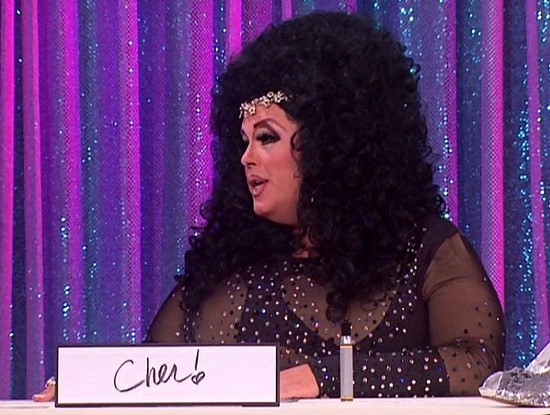 We got what she was going for with the more lackadaisical take on Cher. After all, Cher herself tends to have a bored and above-it-all side to her. The thing is, it might have been accurate on some level, but it wasn’t drag and it wasn’t entertaining. She really didn’t make one decent joke or have one decent line. 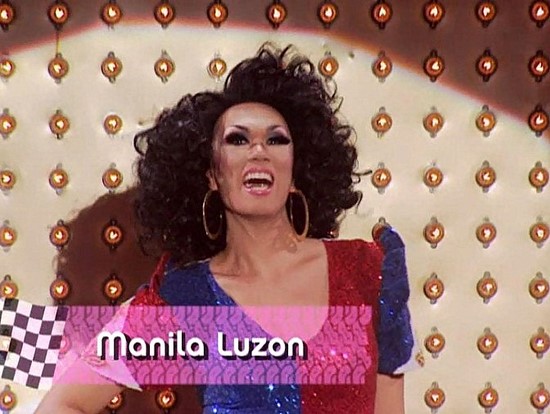 Look at her. That is a STAR. 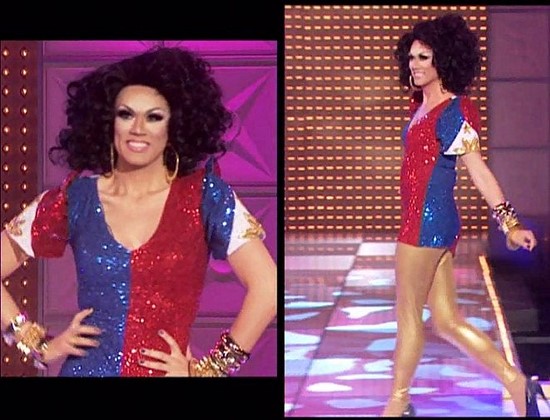 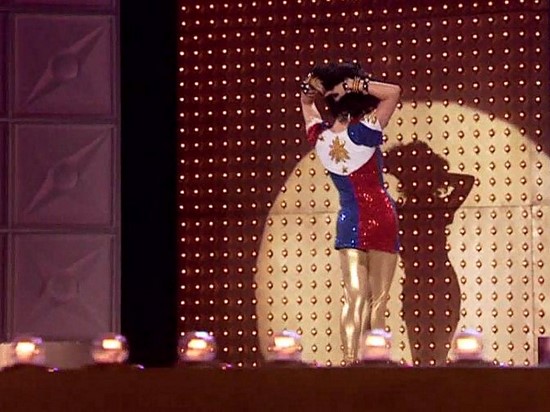 We suppose wearing a dress evoking the flag of the Philippines was a response to the repeated charges of anti-Asian racism coming from some of the other queens. Their main criticism seemed to be that if you’re going to do Asian stereotypes, you have to be the correct kind of Asian to get away with it. We don’t really agree with that and we think there’s something awfully hypocritical about drag queens lecturing other drag queens on political correctness since the entire form of expression is drenched in political INcorrectness and always has been. Anyway, Manila flipped them the finger and really played up her “correct” Asian bona fides this week. 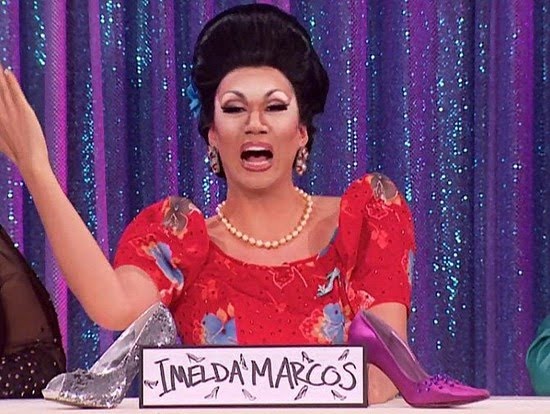 Although we have to say, while the face and the wig and the expressions were all hilarious, she didn’t really kill with this performance. We were expecting a “Pandora as Carol Channing” moment and it never really came.