It’s all about the ladies this time. 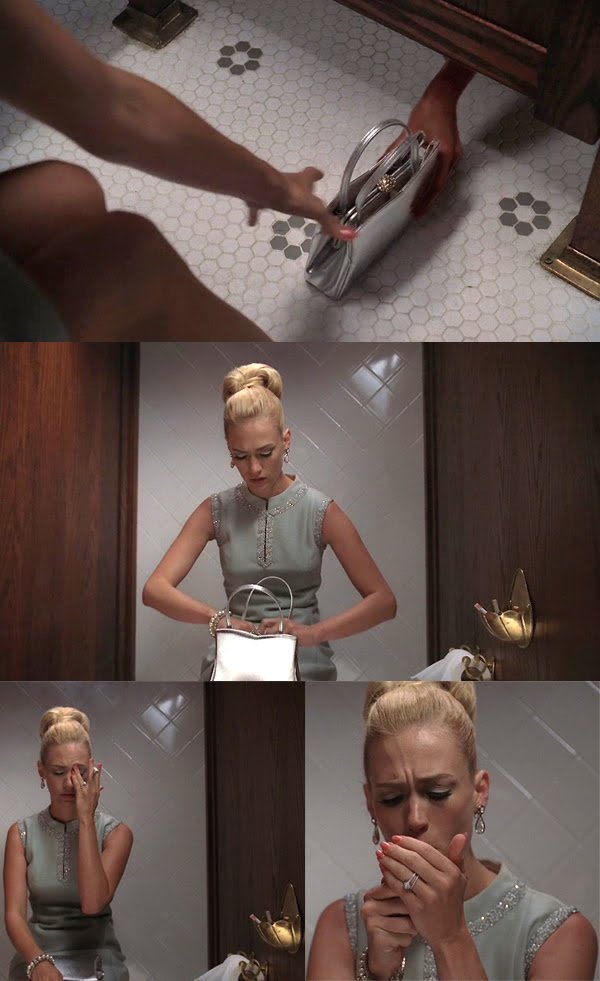 It’s comforting to know that Betty can still step it up when she needs to. You don’t lose those trophy wife skills overnight. This is a pretty stylish, pretty fabulous, dinner in the city kind of look. And yet it still has a maturity to it, with the high collar, showy earrings and tight bun. And whose mom didn’t have a dress with that silver trim on it? Think of it as a proto-Mrs. Robinson look, if Mrs. Robinson had started out as a Hitchcock blonde.Janie Bryant has really been playing up Betty’s cold side by dressing her in icy blues this season, but it’s interesting to note that blue has generally been an important color for all the women this season. Sally and Mother Francis wore blue at Thanksgiving, Betty wore it to meet with Sally’s therapist, she also wore it when Don confronted her about moving out of the house, and when she slapped Sally. Joan wore it when she had an argument with Greg, and in the scene where he patched her finger, Peggy, Trudy and Megan wore it in the ladies room scene, Faye wore it when she was manipulating the secretaries during that focus group meeting, Peggy wore it when she found out about Trudy’s pregnancy, Allison favored blue in almost all her outfits, which makes us think she’s the reason why all the other women are wearing it this season. Her ghost, and the fact that she stands as an example of how women were mistreated in that environment and at that time, means all the other women are feeling the effects trickle down to them. They’re all Allison in their own way and they all respond to that fact differently.

Or maybe we should be looking further back, to last season’s episode entitled, The Color Blue. That would be the one where Betty opened Don’s desk drawer and changed everything. In a way, that was a bomb going off and its effects (divorce, formation of SCDP, Don’s downward spiral) have been slowly rippling outward, affecting not just Betty, but Sally, Peggy, Joan, Allison, Faye, Megan, and even Trudy.

It’s easy to over-analyze this show and we have to admit, neither of those theories sound particularly solid, but clearly blue is the color for all these women this year, whatever it may mean. 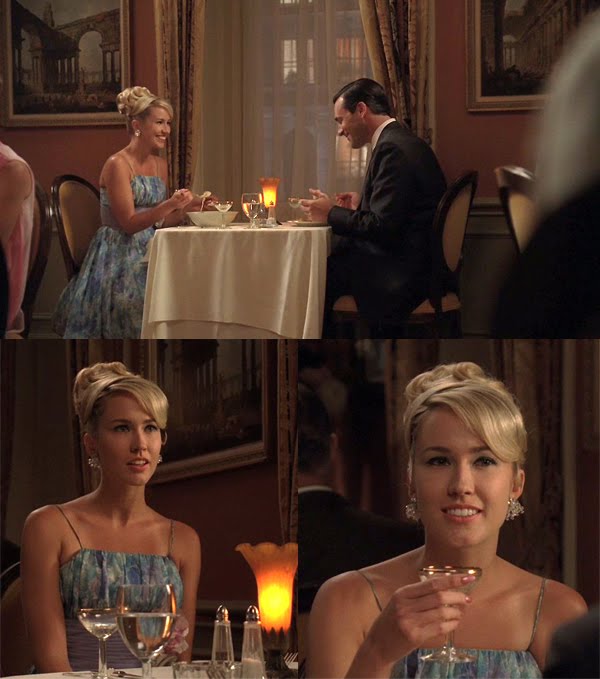 We could be wrong or it could be the lighting, but Bethany looks a couple of shades blonder than the first time we met her. She wears her hair up all the time, but Betty doesn’t. By putting Betty in a showy bun and by dressing both women in blue with large earrings, the point is being made quite clearly. Bethany is just Betty 2.0. A younger Betty showing way more skin and a lot less adornment than than the 1954 model. 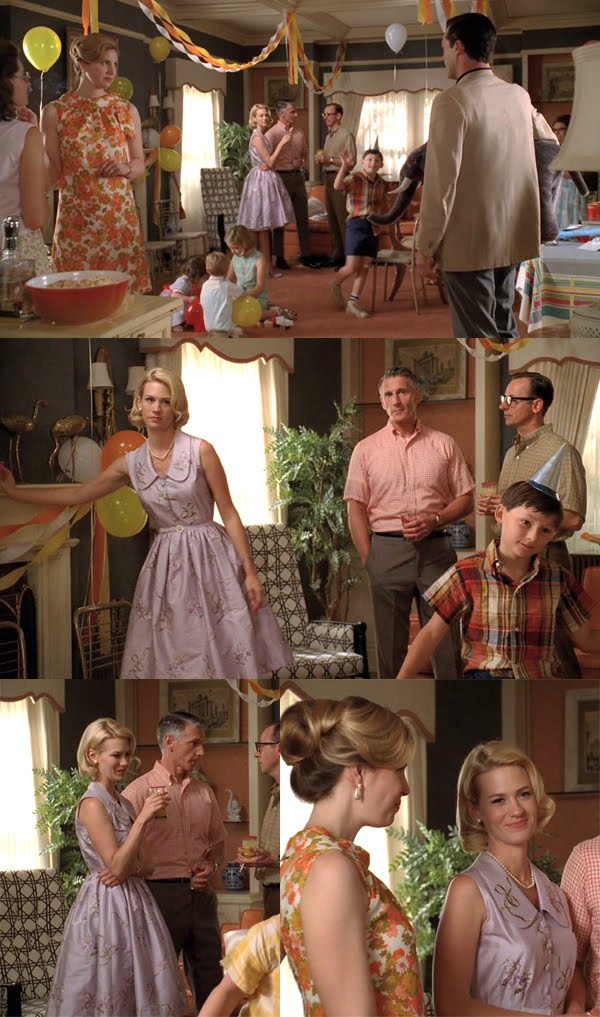 Look at how tied Francine and Betty are to the Francis family living room. The shades of purple and orange perfectly coordinated with walls, rug, and furniture. A unified front in opposition to the unwelcome Don. Even Henry matches the room. 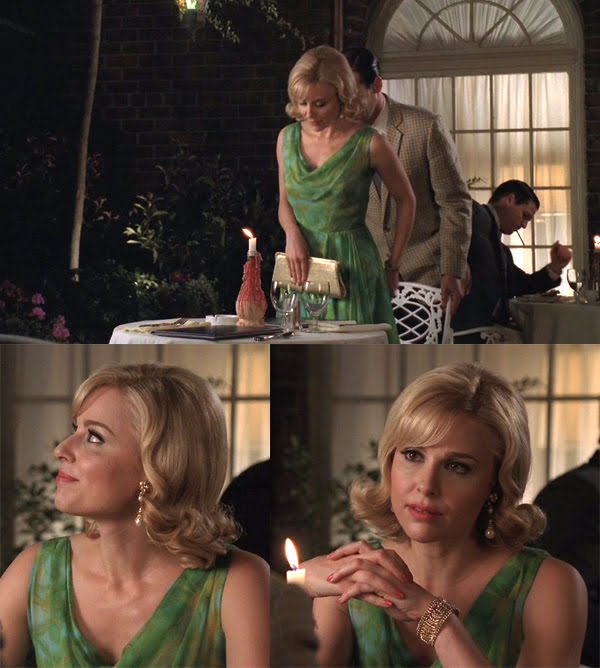 We can’t put our finger on why, but the more we think of it the more we think this one will simply be an enjoyable rebound. It seems too obvious. “She’s like Betty, except, blunt, career-minded, and probably Jewish!” As if Betty Hofstadt and Rachel Mencken were combined somehow.

Anyway, Faye ditched her serious black suits and hit the town in a vibrant and life-affirming green. She’s just the shot in the arm Don needs to get his life back, which is partially why we think she’s not going to be the second third Mrs. Draper. It’s not conscious, but Don’s kind of using her as a therapist without actually going into therapy. That would explain why he suddenly started unloading on her as soon as they sat down. He needs someone to listen to him and she’s really good at that; trained in it, in fact. They’re both confusing this for an attraction, but at least Don is self-aware enough to not sleep with her. She’ll be good for him, and hopefully she’ll get to have some fun and not get hurt in the process, but we’re thinking this matchup will have an expiration date. 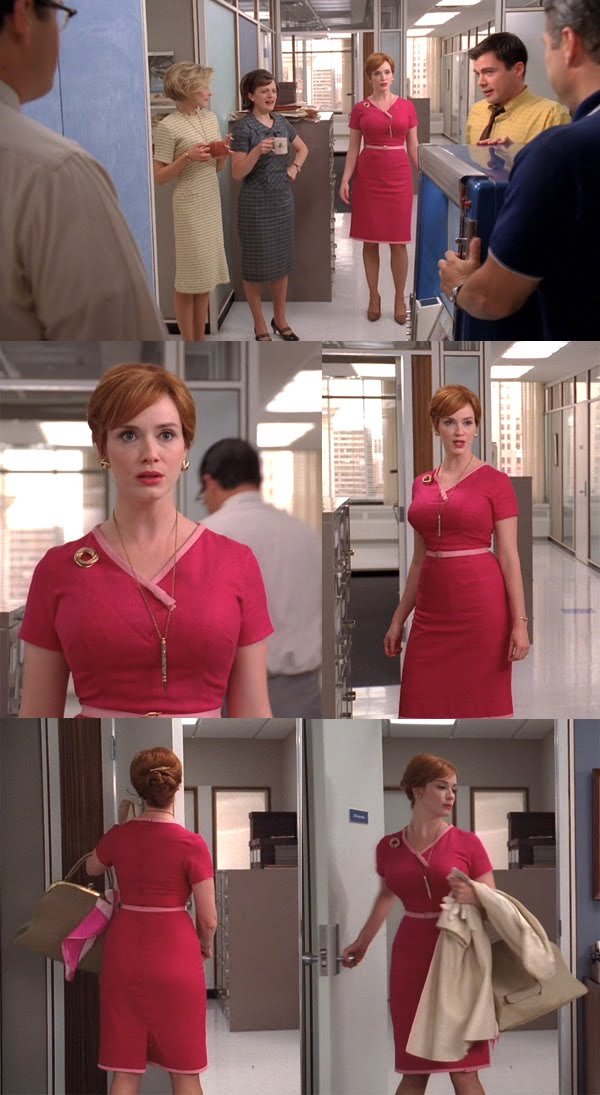 That first shot emphasizes the conflict between Joey and Joan. They both stand out in the brightest colors. Joan is in a vivid pink, all the more to illustrate her femaleness and, in this scenario at least, her vulnerability and lower status in this environment. 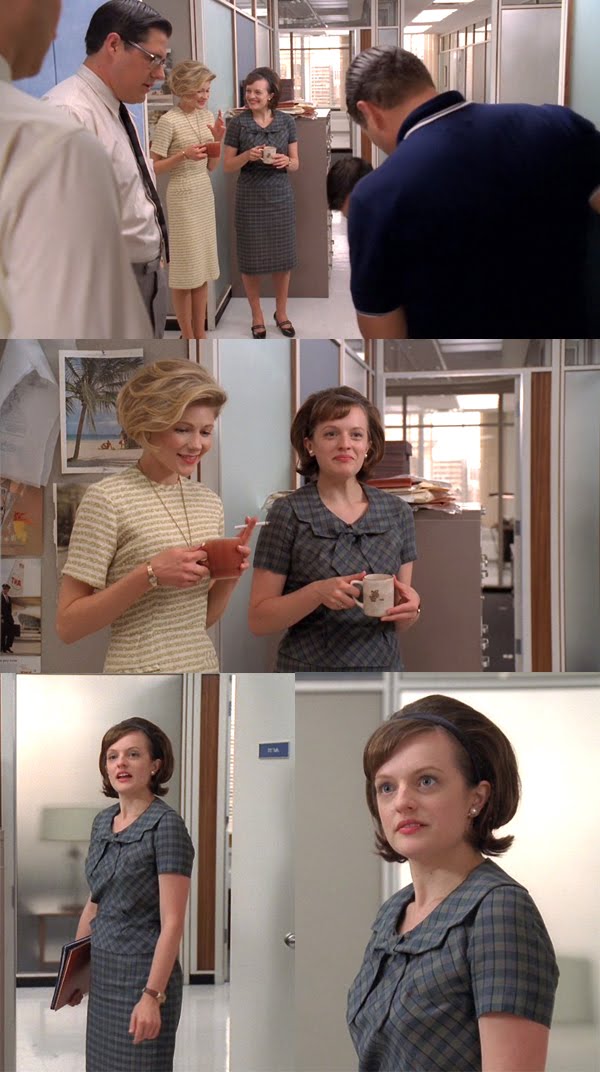 Peggy and the other woman (presumably a secretary) are too neutral to be affected by the testosterone-fueled antics of the office. Their colors blend in perfectly with the male-dominated surroundings. Joan is all about her femininity. It’s hitting her harder than the other women because it’s such an insult to who she is and her self-perception that she can control the environment around her. This kind of behavior never would have gone on at the old Sterling Cooper offices (not during office hours, at least) because Joan wouldn’t have allowed it. 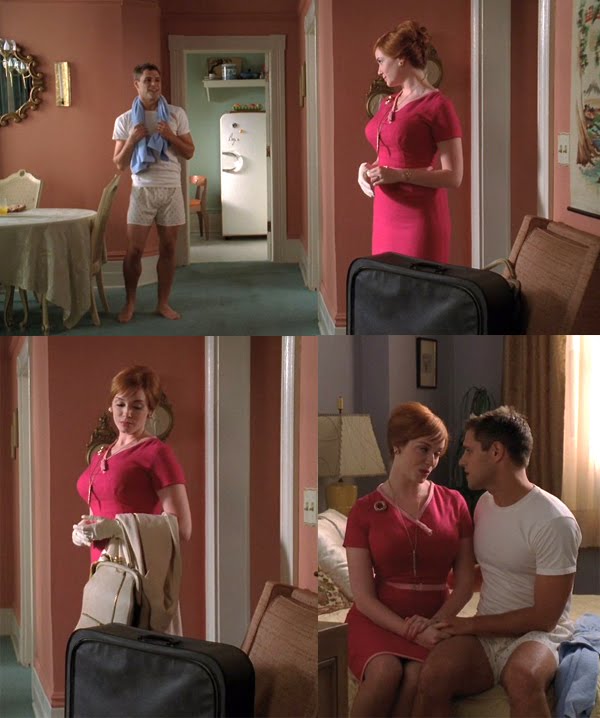 And here the same pink outfit ties Joan to her home, which is looking more and more like a cage in which she’ll be abandoned soon. 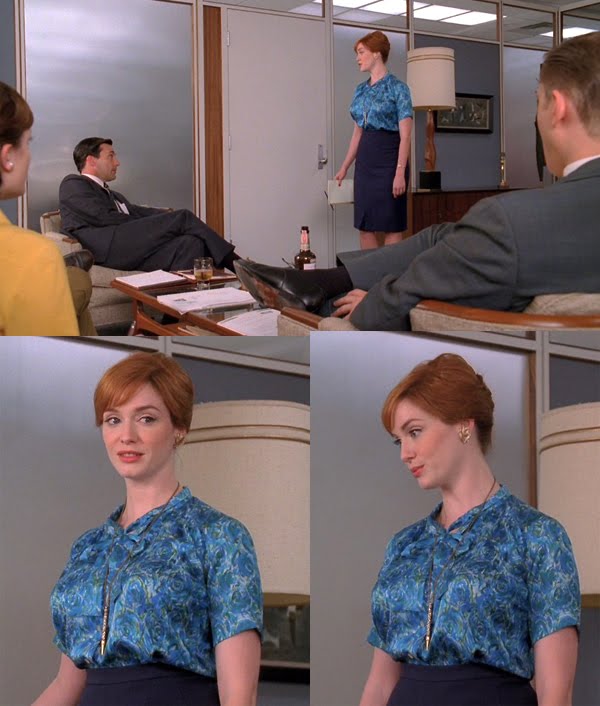 It’s subtle, because there’s not much here that deviates from the established Joan style, but this skirt and top (in blue) are serving to make her look a little dowdy. She wore the same skirt last week when she reprimanded the guys about cleaning up the workspace. It’s a flattering skirt, but not with these blousson, short-sleeved blouses with pussy bows. At 34, Joan is both old and old-fashioned. Halfway to becoming like Roger Sterling’s frumpy secretary Caroline and looking at Ida Blankenship as her inevitable future further down the road.

Man, how depressing is that? 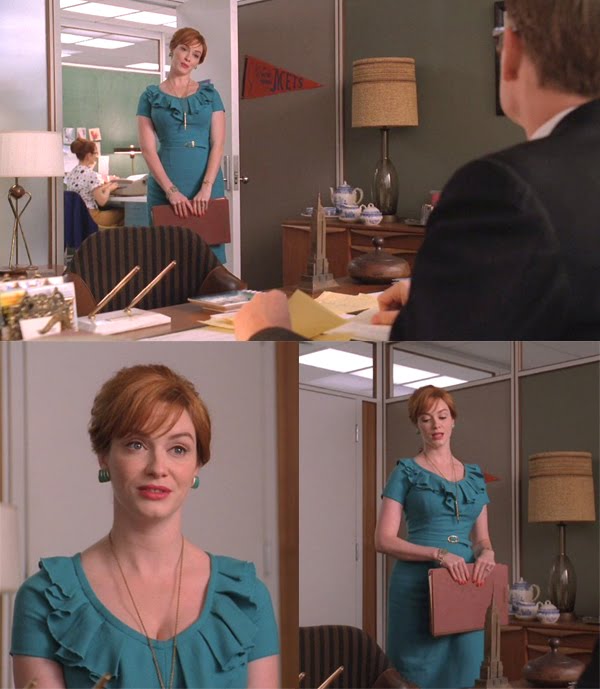 She had some work to do getting some of the men to do her bidding, so Joan ditched the practical blouses for a classic Joan getup, all curves and ruffles. We have to reiterate that this was not at all considered a youthful or modern style at the time. It’s not that she would have looked slutty or tacky to 1965 eyes, just that she would have looked – especially to someone younger, like Joey – like an aging sexpot, totally out of style. Joan’s gone from “Marilyn’s more of a Joan,” to reminding the younger people around of her of Jayne Mansfield. Bear in mind how tight Joan’s clothes are at all times in comparison to the women all around her. We think she looks fabulous, but by 1965 office standards, she’s definitely a little showy. She always has been, but we in the 21st century are so enamored by how good she looks in those clothes. 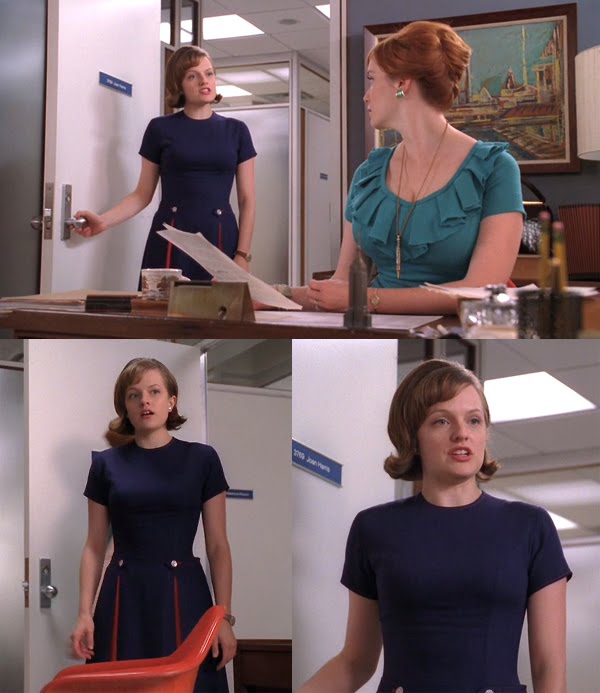 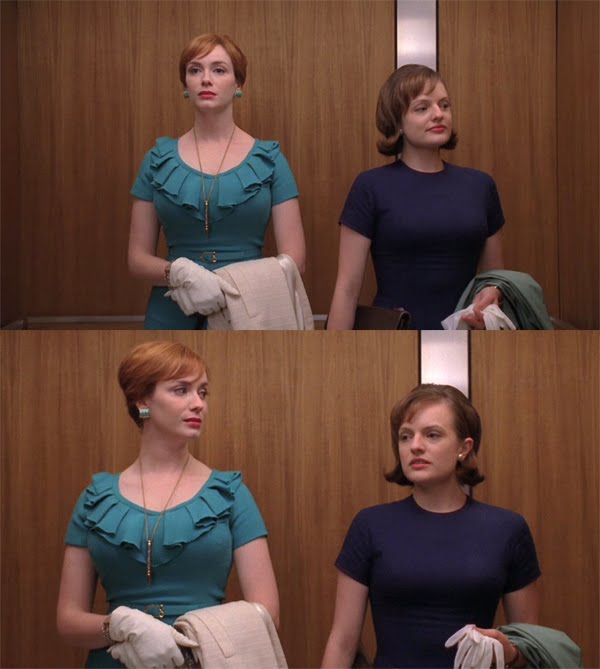 Two women in blue, two totally different styles, two opposing points of view. The more we think about it, the more we can say definitively that Joan was wrong here. Oh, she was right about what the fallout would be, but she was wrong to think that Peggy shouldn’t have done what she did. Ultimately, Peggy’s method would be the only effective way to deal with sexual harrassment in the workplace. If women continued to try it Joan’s way, it never would have been seriously addressed at all.

As we said in our review, Joan’s way of dealing with it was to use her feminine wiles to manipulate the men in power to give her the desired result. Hence, her overtly feminine outfit. Peggy’s outfit, interestingly, has a bit of a military feel to it, with the dark blue, high collar, strong shoulders, brass buttons, and red accents. It would be short-sighted (not to mention wrong) to say Peggy’s approach was the masculine way in response to Joan’s more traditionally feminine way, but it’s fair to say Peggy marched right into the situation and faced it head on, like a soldier would, no matter the gender. Joan’s approach was “every woman for herself,” Peggy’s approach was “When this happens to one of us, it happens to all of us,” a collective response (much like a military response) that would ultimately prove to be the most effective way of fighting sexual harrassment.

And of course, they’re both in blue.