With a show as full of nuance and shades of gray as Mad Men, it’s expected that the viewer understands the imperfections and contradictions in all the characters. And while Mad Men is essentially a night-time soap opera, it remains refreshingly free of broad character types like The Villain, The Hero, The Victim, etc., precisely because of these nuances. But if ever there was a character on Mad Men that elicited the exact same response from us whenever we saw her, it was Kitty Romano, who inadvertently received the nickname “Poor Kitty” from us because that’s what we said every time she appeared.

Not that she appeared often, but she was part of a story that had particular resonance with us, and seemingly a lot of the rest of Mad Men fandom. Played by Lorenzo favorite Sarah Drew (because of her work on the late lamented Wonderfalls), Kitty was a sweet, loving, presumably working class Italian girl who made the perfect wife for Sal Romano, whose homosexuality was getting increasingly difficult to suppress in 1960s Manhattan. Like we said, she didn’t have a lot of scenes but she nonetheless stood as a powerful testament to the damages left in the wake of gay people trying like hell to be straight people. Kitty Romano represents all those spouses who felt unloved, unattractive, and unfulfilled and simply didn’t understand why; as much a victim of societal homophobia as any gay person of the time.

Our first glimpse of Kitty, and a shock to the audience that Sal would have a girlfriend or wife. Turns out, she’s his wife, but we don’t know this at the time. All we know is there’s a very traditional-looking girl in Sal’s life, serving him dessert in an outrageously domestic ensemble while they both settle in to watch Jackie Kennedy nervously slur her way through the famous White House tour.

She gets no lines in this scene because really, her very presence is statement enough. Like everyone else watching this episode for the first time, we cried out “Sal has a WIFE?” We’ll find out later that she comes from the same neighborhood in Baltimore as Sal and that she had a crush on him growing up. It’s implied that she is Sal’s mother’s caretaker and that Kitty moved to New York when she did. We’re assuming Kitty’s Italian because, given all that information, we don’t think that’s a big leap to make. And of course, all of this is in the clothing.

The brilliant red, the white lace on the apron, the big hair (with the wave around the forehead) that looks like it spent the day in curlers; this kind of look could have been a uniform for middle class urban Italian women of the time. Think Annette Funicello and Connie Francis, only think of them from about 1957 because that’s when this was considered stylish. Coming from the comparatively smaller, more definitively working class city of Baltimore (a city that practically iconized big hair and full skirts long after they went out of style) to New York would naturally mean that, compared to most of the other women on the show, she’s a little out of style. 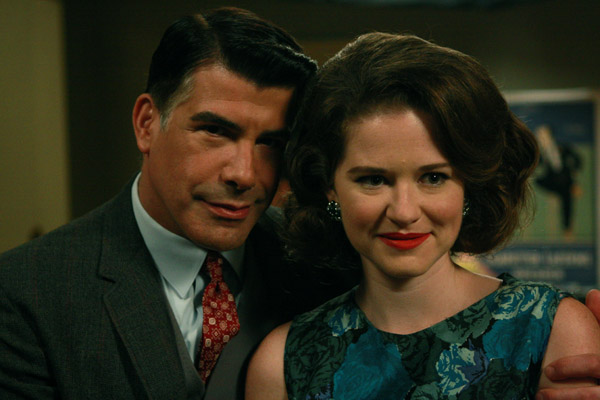 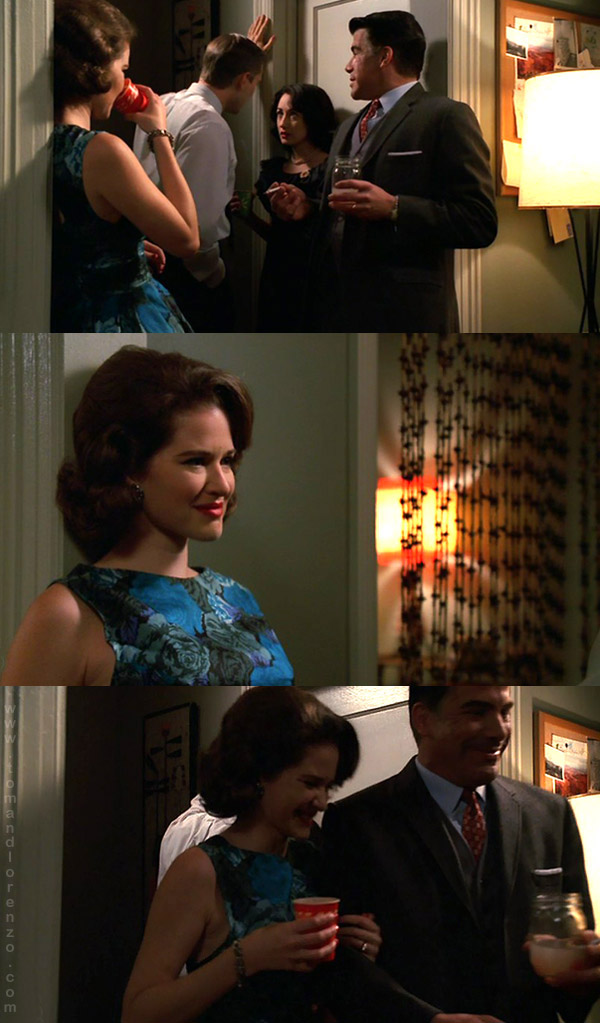 Another really brief scene at Paul Kinsey’s apartment party, as they teasingly watch Ken make his move on a drunk girl. The writers were really playing their cards close here, only letting the audience know that there was a woman in Sal’s life but not knowing exactly who she was or how “serious” it was.

Looks like Kitty got the hang of New York style pretty quickly. This is a far more up-to-date dress than that giant spumoni she was flouncing around in in the previous scene. The details are really subtle on the makeup, but note that she’s wearing fairly heavy makeup in comparison to the other women of the show, heavy eyebrows and garish red lips, again, a nod to her Baltimore Italian-American background. Even the hair’s kind of Baltimore-big. 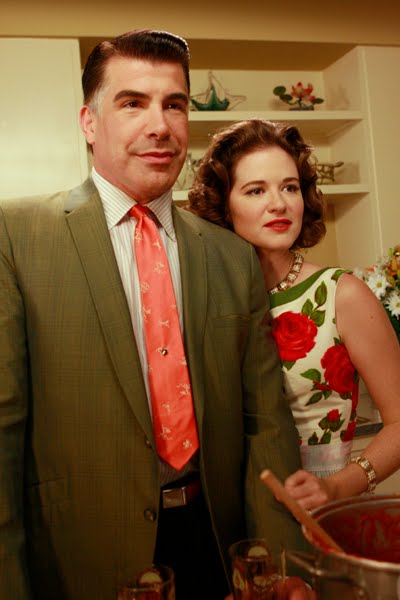 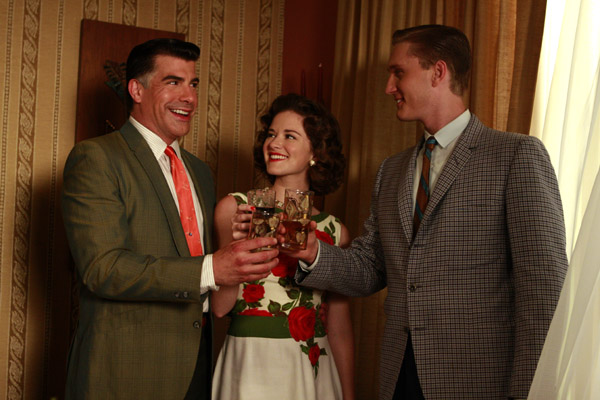 Sal develops a crush on Ken and invites him to Sunday dinner. Kitty is thrilled to play the part of hostess, then crushed to be swept aside by Sal and his pile of issues. Several times she attempts to start or join in on the conversation only to have Sal ignore her or brush her off in favor of Ken, gushing over his short story, “The Gold Violin.” “It’s perfect in every way, except it couldn’t make music,” says Ken, to which Kitty, serving salad replies, “Oh my!’ not realizing that her marriage has just been described.

After Ken leaves, she breaks down in tears at being so cruelly treated by the lovestruck Sal. “Do you even see me here?” she asks. “A lot of people find me very interesting, you know!” Sal is appalled and deeply apologetic and offers to do all the dishes while she puts up her feet, a move that pretty much screams “I’M GAY.” Still, she takes his apology and smiles, because she’s a good wife like she was told to be and she loves him.

This is 1962 modern, but it’s also Italian Housewife, all the way. It’s practically the exact colors of the Italian flag, but more importantly, these colors are found in her husband’s outfit and in the apartment decor. She is tied very tightly to both things. In fact, they make up her entire life and the clothes illustrate that nicely in this scene, which serves to illustrate that her life is a lie. It’s something she gets a bare inkling of and it upsets her terribly, although she wouldn’t have been able to articulate why. The very first sign of apology and she’s happy, grateful even to accept it. She’s a good wife and her husband loves her and that’s all she’s going to think about.

We love this dress, though. To us, it says that she’s a sweet girl, thrilled to be a wife, especially to a sophisticated man like Sal, and trying very, very hard to do everything she was told to do.

Kitty comes into her bedroom with a clear agenda to get Sal’s motor running. Armed with her brand new peignoir (“It was on sale at A&S.”) she deploys every trick in her limited good girl arsenal to get Sal to fulfill his husbandly duties, to no avail. When he says he’s tired and stressed about work, she breaks down tearfully, asking him, “Something’s wrong, isn’t it?” “What can I do?” Poor Kitty.

Sal tells her about the commercial he’s about to direct for Patio Cola and how nervous he is. He gets up to act out the commercial, inadvertently doing his best vamping impersonation of Ann-Margret, which was just over the top enough that a lightbulb went off even over the head of this good Italian girl from Baltimore. Even if she can’t put a name to it, the look on her face when his performance is all over tells the tale that she knows her husband’s not, shall we say, the picture of a good Italian husband.

We debated whether or not to include this outfit because we plan on doing a lingerie and undergarments post, but she had so few scenes and this was both her most important one, and in all likelihood her last one for the show. In terms of costume analysis, well come on. What needs to be said about this outfit, which speaks loud and clear all its own? “My husband won’t have sex with me and I want my husband to have sex with me.” That’s about the size of it. Note how much she stands out against the warmer tones of the room and the non-commital gray of Sal’s pajamas. She’s incongruous. She doesn’t belong there. Or at least that’s how she feels.

There’s something a little said about her line asking if he likes it and that she bought it on sale. You just know she bought this thinking it was exactly what was missing from her marriage and that if she bought it, it would make everything better. Sad nightie. Poor Kitty.