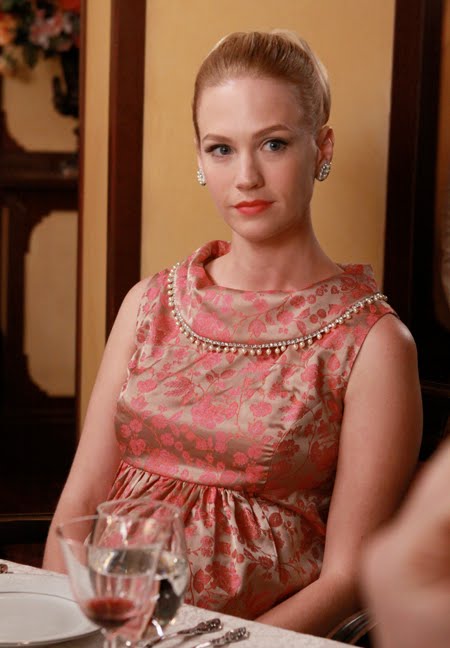 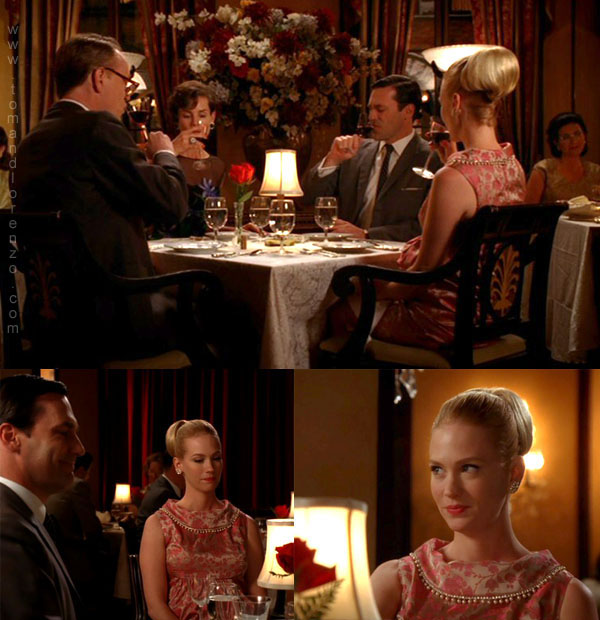 Betty and Don have dinner with Lane Pryce and his miserable bitch of a wife. Betty’s pretty miserable herself. “I’m in a foul mood” are her first words to Don when he greets her. Not that we can blame her. She’s very pregnant and she’s worried about her father, whose second wife left him and who’s getting increasingly forgetful. She does her best to remain chipper throughout dinner, but Lane’s wife is so obnoxious that it casts a pall over the whole evening.
We’ve said this before but one of the things we really admire about Janie Bryant is that she doesn’t shy away from dressing the characters in clothes that look utterly ridiculous by modern standards. She could have taken the relatively easy route of dressing everyone in classic styles that look good almost 50 years later. This is not something you’re going to see reproduced at Banana Republic any time soon but in 1963 it was chic (especially for maternity wear) and expensive-looking. 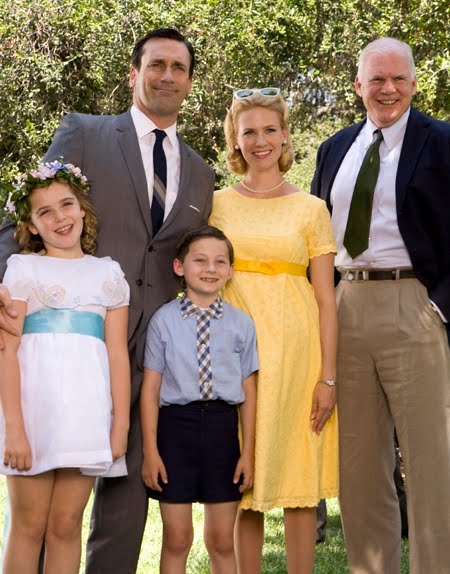 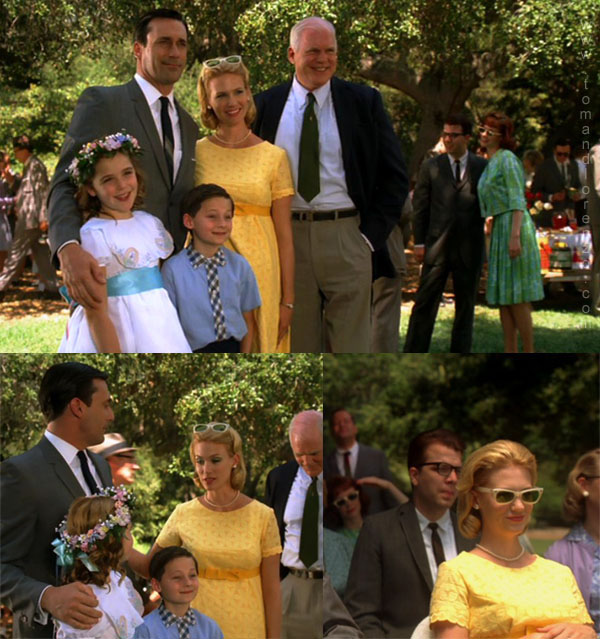 The Drapers attend Sally’s school’s May Day celebration along with Betty’s father, who’s now living with them.Despite the introductory outfit above, Betty mostly wore less-than-glamorous maternity clothes throughout the first half of the season. Even when she’s miserable and uncomfortable, Betty still creates her own light. This brilliant yellow stands out among all the other colors in the scene, as it was meant to. And as always, the Drapers look advertisement-perfect. The very picture of the modern “new frontier” family. 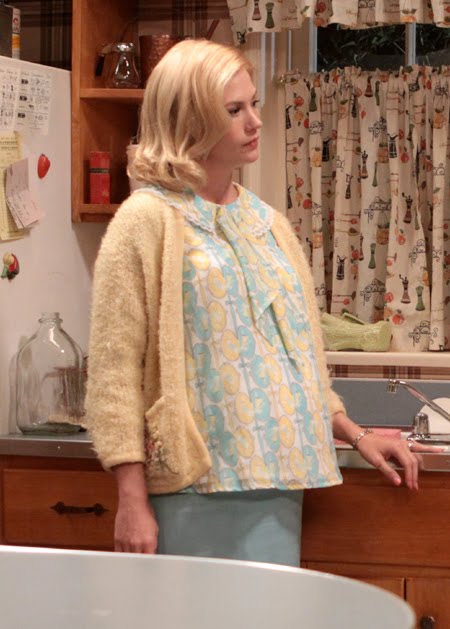 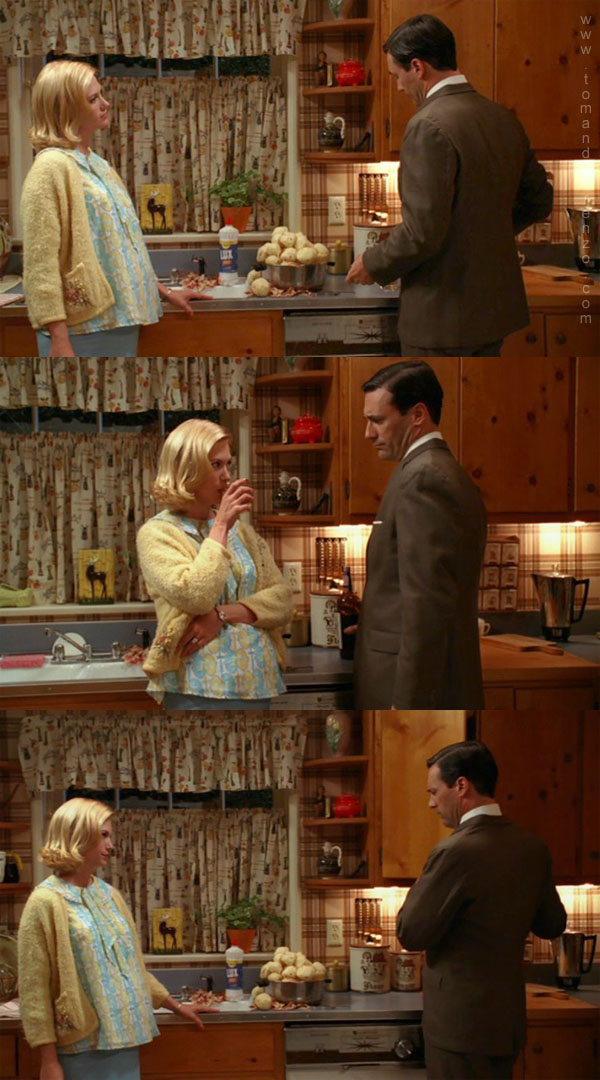 Don comes home from work, pours himself a glass of whiskey and listens to Betty complain about her day with her increasingly senile father, who peeled enough potatoes to feed an army because he thought he was still in the army. Betty takes Don’s whiskey and drinks it. They talk about the Sterlings’ upcoming Derby Day party and she admits she’s looking forward to it.
God, maternity clothes were so aggressively ugly back in the day. And weirdly juvenile, probably because there was a concerted effort to desexualize pregnant women. Women could be sexual creatures or they could be infantilized. Those were the choices. Blue, yellow, and pink were also pretty much the only color choices in maternity wear at the time, so we’ll be seeing pretty much only those colors on her for the duration of her pregnancy. 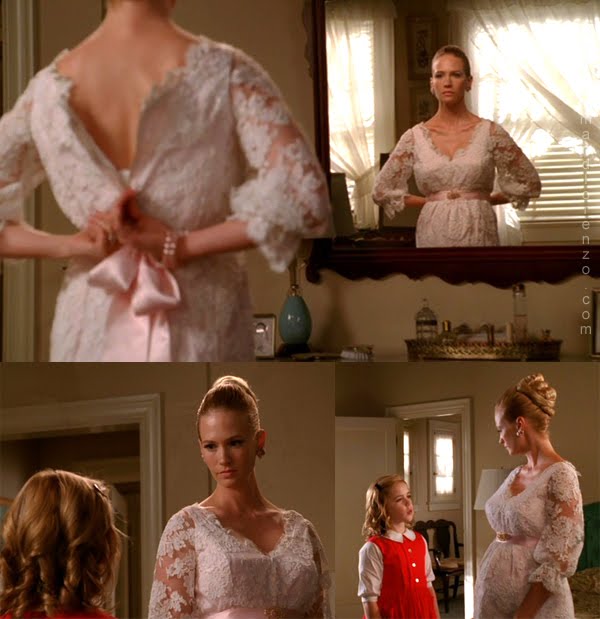 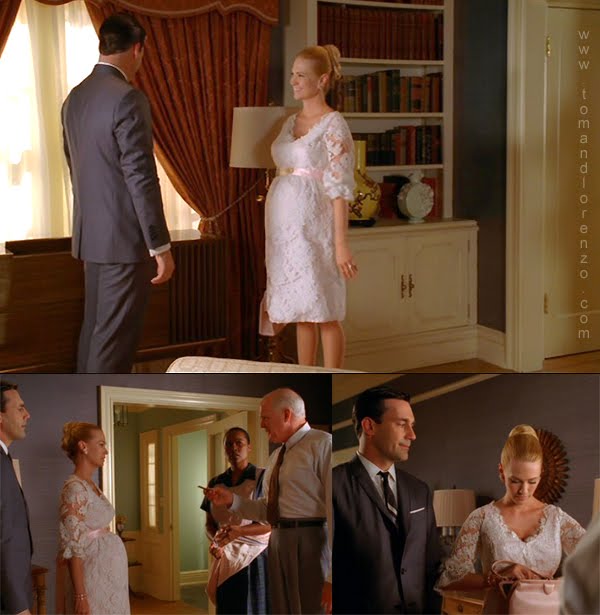 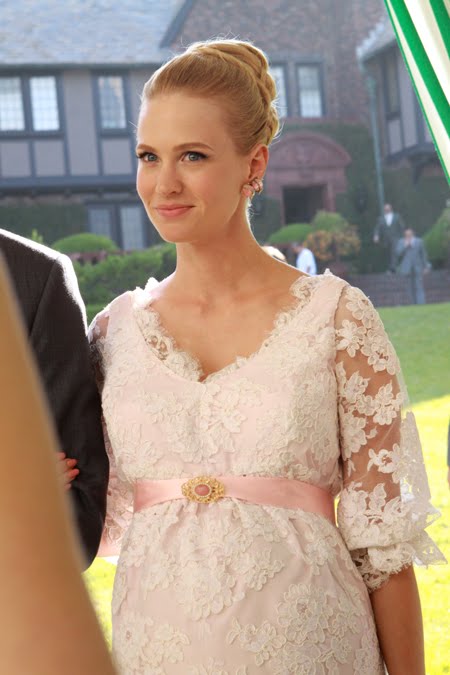 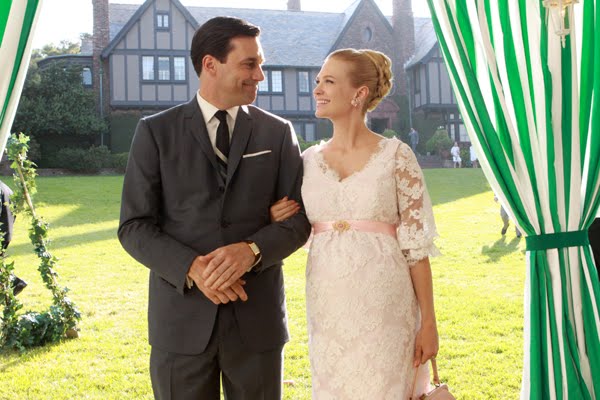 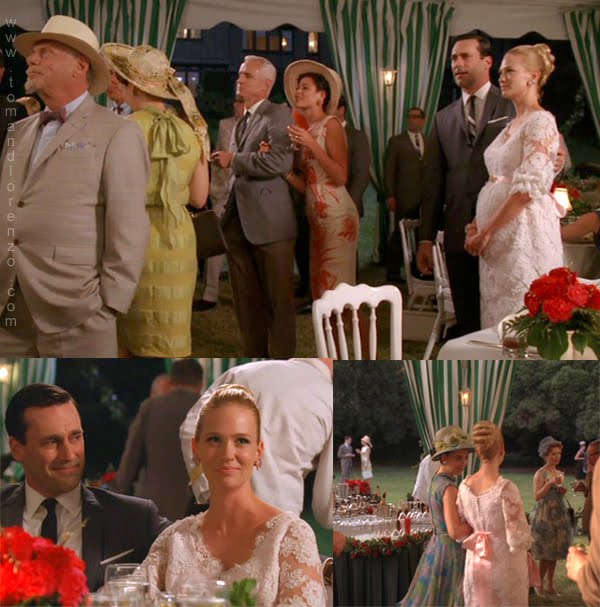 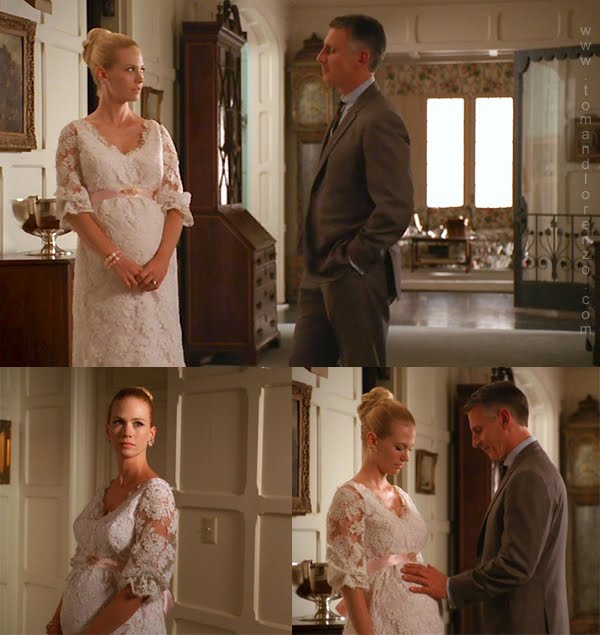 Betty and Don attend the Sterlings’ party and she meets Henry Francis, who pays her exactly the attention she so craves from men. He (rather creepily) asks if he can put his hand on her belly and she assents.

There’s a lot of talk in the DVD commentaries about how Matthew Weiner didn’t like this dress and how Janie Bryant had to fight for it. She was right. After all, what does white lace imply on a grown woman? A wedding gown. Of course that’s what she’d be dressed in for the scene where she meets the man she will leave her husband for.Again, this isn’t “classic” in the way a lot of the clothes on this show read. It’s pure 1963 and only really works in that time period. 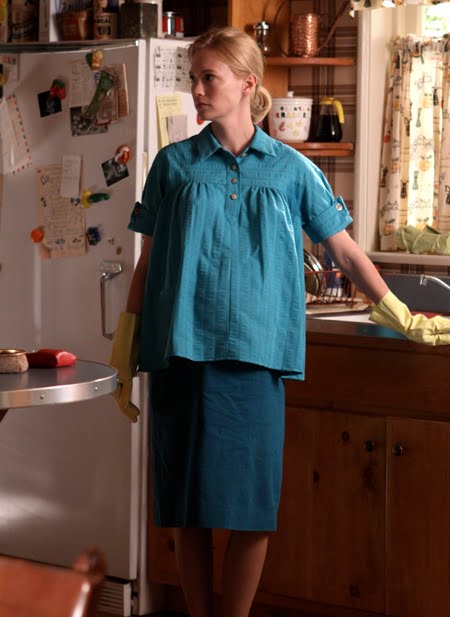 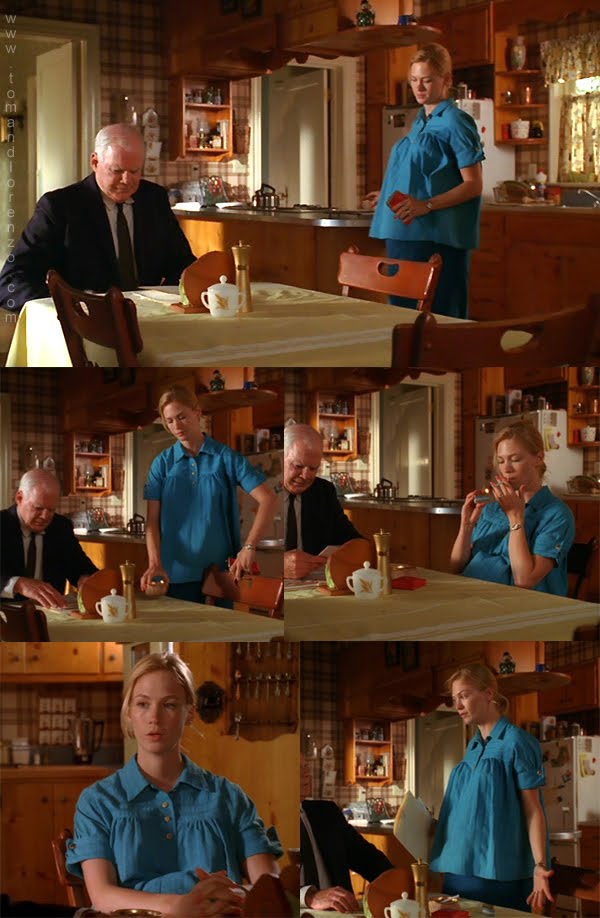 Gene sits Betty down and tries to have an end-of-life heart-to-heart with her. He lectures her about her smoking and tells her that he wants her to have her mother’s furs. He tries to discuss the arrangements for his funeral but she cuts him off. “It’s selfish and morbid. I’m your little girl.” “Can’t you keep it to yourself?”How ironic that she puts on the little girl act when she looks anything but the part. There’s not a lot of deeper meaning to this outfit, but it’s dead-on for the period. How many of us have old pictures of mothers and grandmothers wearing outfits exactly like this?

Betty’s father dies and she’s rather cold to Sally’s grief.
Again, not a lot here to analyze, but it’s a perfect recreation of how millions of women looked during the third trimester back in the day. This is even a little dressed up (note the pearls), probably because she had to leave the house to pick up the kids. Of course it’s not nearly as dressed up as her non-maternity clothes but very pregnant women were given a certain amount of leeway.
Season 3 Episode 5 – “The Fog”

Betty and Don are called in for a parent-teacher meeting because Sally’s been unusually agressive in school and recently got into a fight with another girl. Betty initially tries to lay blame elsewhere. “This girl .. Sally told me she’s a bruiser.” When her teacher (with whom Don will shortly begin yet another affair) asks if anything has changed recently at home and they inform her of Sally’s grandfather’s death. Suzanne, the teacher, is a little appalled that they didn’t send a note in or let Sally have time off from school, but she tries to hide it. She also tries to comfort Betty, who does not want to be comforted by this woman. “I’m not as upset as I look.” Betty asks if they can just let this go (i.e., pretend it never happened) since the school year is ending soon. “I want to put it behind us. I really want everything to be okay when the baby comes.”
As with so many scenes on this show, there’s a bit of a class issue at play. Betty doesn’t appreciate this teacher delving into her family life and judging her. While both women are in sleeveless cotton dresses in shades of yellow, there is a distinct difference. Betty’s clothes look more expensive and well-made than Suzanne’s. Again, it’s a slightly juvenile look with that big bow right at her belly. Betty looks like a pampered cupcake and Suzanne looks like a working girl. 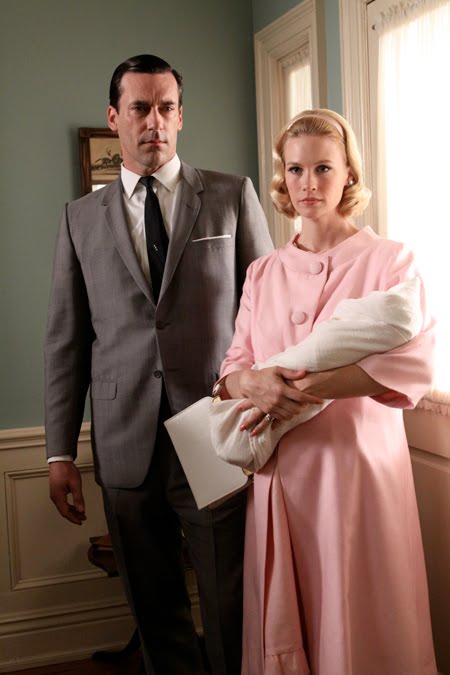 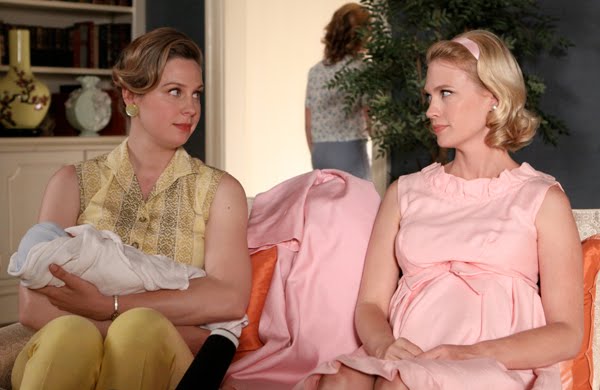 Betty comes home from the hospital after giving birth. Ever the good neighbor, Francine is there watching her kids for her. She asks Betty how it went. “You know. It was all a fog.” Francine tells her there’s enough food in her fridge to feed an army and Don asks her if she would like something to eat. It won’t last, but right now she’s being treated like a princess.
It wasn’t at all uncommon for women of a certain class to have an outfit picked out ahead of time specifically to wear home from the hospital, because she’d know that people will be in and out of the house and pictures will be taken. This pink dress and matching coat is very much of the style and period for those kinds of “coming home” ensembles. It’s practical, because it’s lightweight and loose-fitting, and it’s appropriate for that (very) short period where her every need will be attended to.
Season 3 Episode 6 – “Guys Walk Into an Advertising Agency”

Sally is still grieving for her dead grandfather and she’s a little freaked out that her new baby brother has the same name. She’s convinced herself that the baby is her own grandfather reborn and doesn’t want to have anything to do with him. Betty sits down with her in her room and gives her a present. “And my goodness, it’s from Baby Gene.” Sally unwraps her new Barbie, but she doesn’t seem particularly enthused about the gift. Betty tells her that Baby Gene wants his big sister and that, “you’re very important to me too.”
Poor Betty is always caught up in her own angst so we rarely ever get to see her in scenes where she’s a good mother to her children. This was a rather sweet scene, even if Betty’s attempt was a little awkward. It would ultimately be Don who teaches Sally that there’s nothing to fear from her baby brother, but at least Betty’s making the attempt here. It’s notable that she’s still wearing maternity clothing, which is a nice touch that too many costumers miss when dealing with characters post-pregnancy. Even perfect Betty is going to need a little time to get her figure back, especially after her third child. It’s notable that this is a very “home-y” look for her, what with the rick-rack trim and the fact that she matches the room and the bed spread.