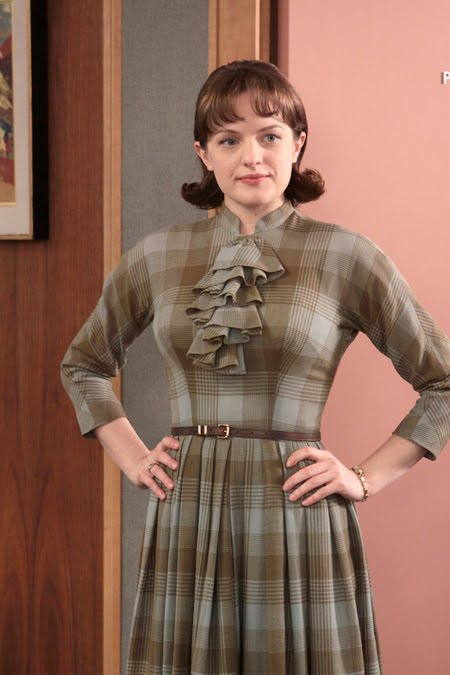 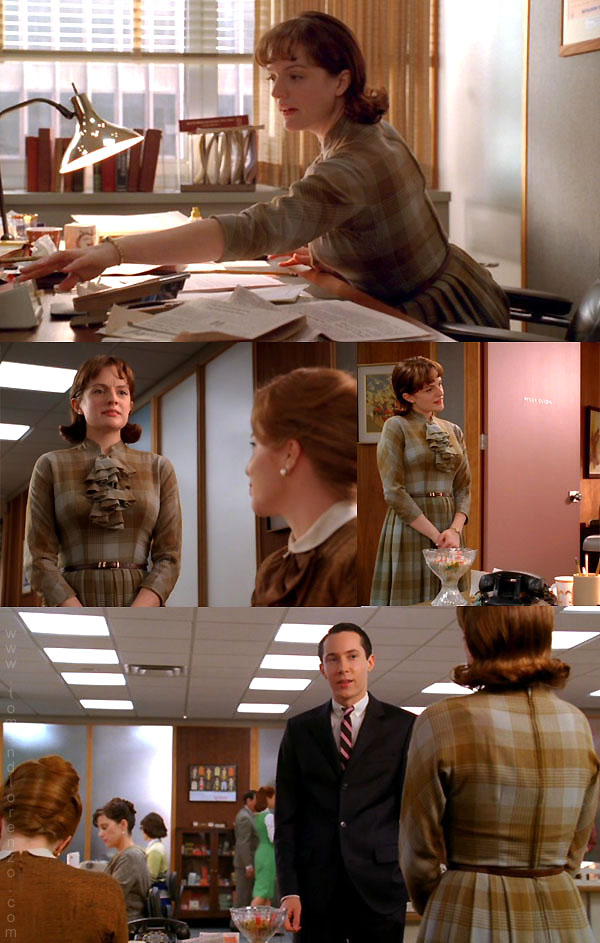 After unsuccessfully attempting to reach her secretary on the intercom, Peggy leaves her office only to find her totally enthralled by the smarmy Mr. Hooker. He excuses himself and Lola, her secretary sheepishly admits that she could listen to him read the phone book. Peggy, who really has no time for silly-minded secretaries, cuts her off and says, “Well, when he gets to ‘S,’ I need Howard Sullivan at Lever Brothers,” and turns her back on her.

We saw this outfit at the end of last season when she first got her new office, but it serves an important role here. Part of Peggy’s story this season was about how serious she his and how stuffy she comes across to her co-workers. It’s a pretty silhouette, and going forward, it’ll be a quintessential Peggy silhouette – fitted top and full pleated skirt – but the plaid (which is also a Peggy trademark) is so drab, in dusty shades of brown and blue. There’s a bit of a dichotomy here because the details are so feminine, like the enormous ruffle at the color, but the colors are so masculine. 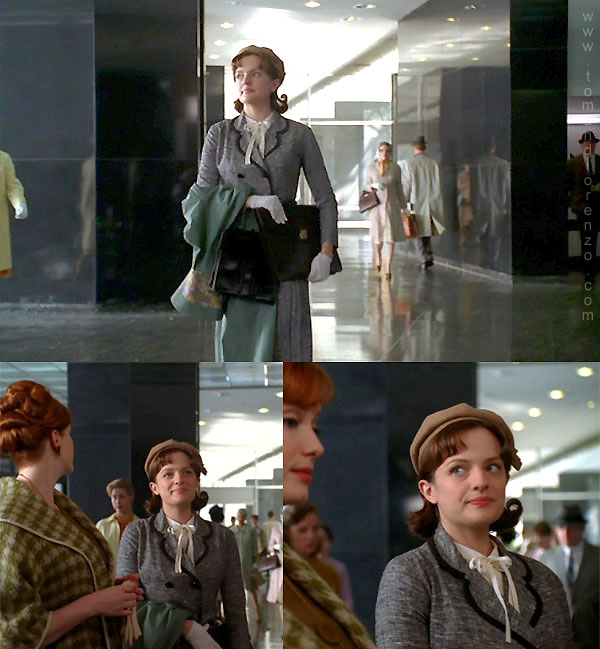 Peggy meets Joan at the elevator banks and after the “good mornings” are exchanged, launches right into complaining about Mr. Hooker and Lola. Joan makes it clear she doesn’t want to hear it, but Peggy pretty much ignores her and goes right on complaining, to Joan’s annoyance.

It’s a very brief scene, but it’s setting up the same details: Peggy is very serious and very work-focused and what better way to illustrate it than with this sober gray suit. Although we have to say, it is a pretty smart outfit even if it isn’t as exciting as Joan’s gorgeous olive houndstooth. Actually, it’s not so much the suit that looks drab as that sad beret on her head. Again, there are the little feminine touches, however, like the limp little bow and the white gloves. 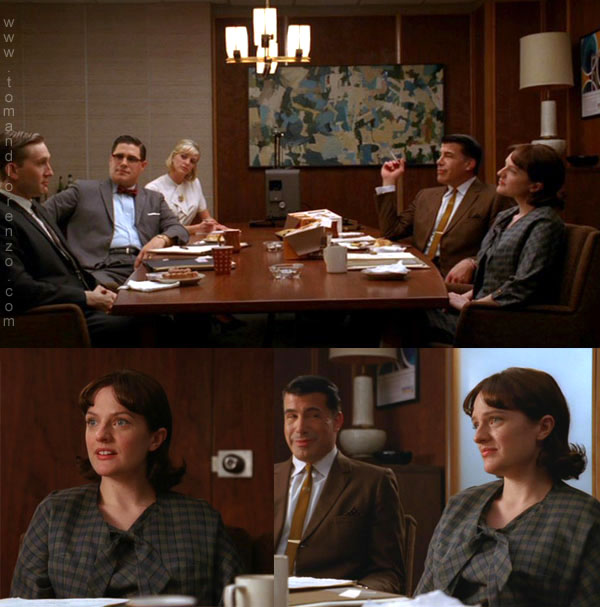 The team watches the opening number from “Bye-Bye Birdie” because their potential client, Patio Cola, wants to match exactly Ann-Margret’s performance for the commercial. The men are all enthralled but Peggy is annoyed and dismissive of “Ann-Margret’s ability to be 25 and act 14.” “Can we at least make fun of it?” she asks. The men are all confused as to why she’d have a problem with it and she tries to explain to them that men aren’t going to be buying this product so there’s no point in focusing on them. It goes right over their heads, of course.

Again with the serious, dark plaids. She was exactly right in the point she was trying to make, but the costume is illustrating how the men see her – dark and humorless – and it makes for a stark contrast to Ann-Margret’s simple sunny yellow dress. She’s got another sad little bow. 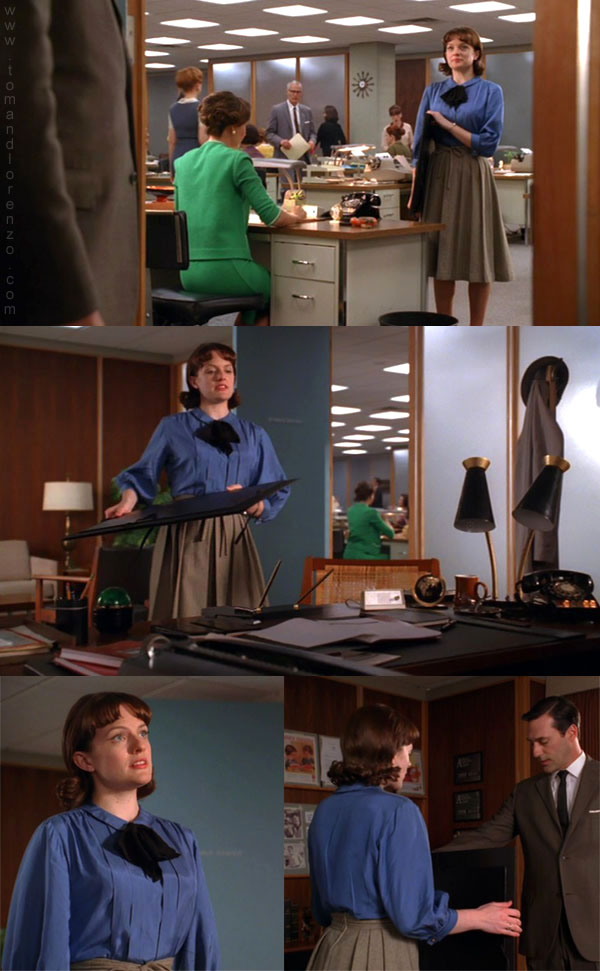 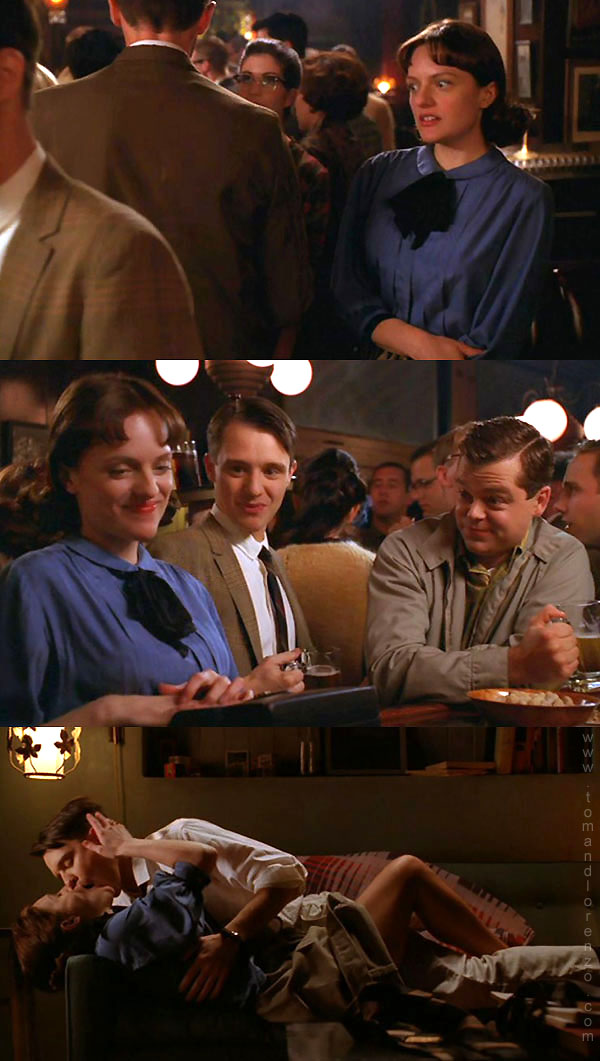 She goes to Don with the storyboards for the Patio ad and he doesn’t get the reference because he hasn’t seen the film. She screens the opening number for him and tries to convince him of her point of view. “Don’t you find her voice shrill?” “I don’t mind fantasies, but shouldn’t it be a female one?” Again, she’s exactly right, but Don doesn’t see it. He makes some rather condescendingly cruel remarks to her as he shoots her down. Later, she impulsively stops at a bar on the way home from work, uses a Joan line that she overheard earlier (It’s so crowded in here I feel like I’m on the subway!”) Picks up a guy, lets him think she’s a secretary, and spends the night at his place. They don’t have sex because he doesn’t have “a Trojan,” (and she ain’t making THAT particular mistake again), but she does let him know “There are other things we can do.”

This is kind of a perfect outfit to bridge the two scenes; one where she’s serious and business-like and one where she sheds that persona in an attempt to be a “fun” girl. Yes, it’s a typical Peggy work outfit: pleated skirt? Check. Pussy bow? Check. But it’s also in a bright blue and the bow is even more obvious than usual. She’s juggling two roles here and the outfit reflects it. 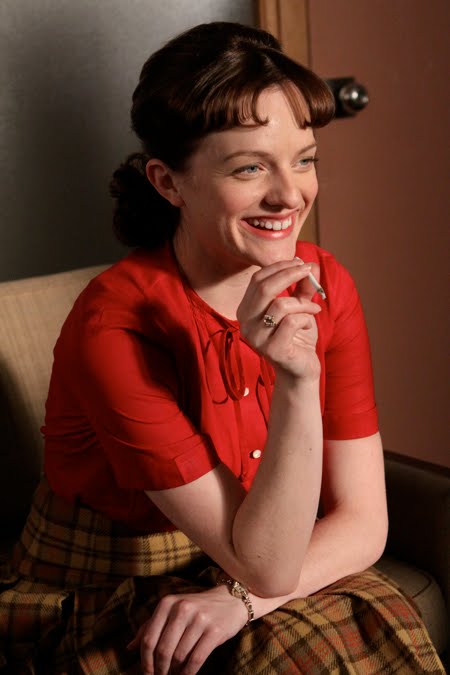 Paul, Smitty, and Peggy are forced to work on a Saturday to come up with 5 new ideas for the Bacardi account. It’s not a particularly productive afternoon and it becomes less so once Paul invites his old college buddy into the office so they can all smoke pot. At first they try and talk Peggy out of it and she utters the immortal line, “I’m Peggy Olson and I want to smoke some marijuana.” The guys eventually wind up comatose, but Peggy’s mind keeps working and she comes up with several ideas while stoned. Smitty is shocked. “Are you working?” “I think so,” she says in wonder. “I’m in a very good place right now.” Peggy’s new secretary Olive (who came in for the day as well) gives her a maternal tsking when she comes out of the office, but Peggy has no regrets and nothing to hide. She recites to Olive all the things she’s managed to accomplish so far in her life and lets her know that she plans on accomplishing many more things.

It’s interesting to note that Peggy isn’t wearing the schoolgirl outfits that were such a big part of her wardrobe last season. Even in a plaid pleated skirt, she’s giving off an adult vibe now. It’s also interesting to note that she’s wearing such bright, declarative colors for the first time this season. The pot gave her some clarity and focus and the colors reflect that.

Of course, she still has the sad little bow.

Peggy posts a very sad and serious ad in the lunchroom in search of a roommate, which leaves her wide open to some mean (but hilarious) pranking from her co-workers. Joan schools her on how to write the right kind of ad and gently chides her for being so stuffy.

We’ve already seen this outfit and it’s accomplishing the same things for the scene. Peggy is sometimes too serious for her own good. 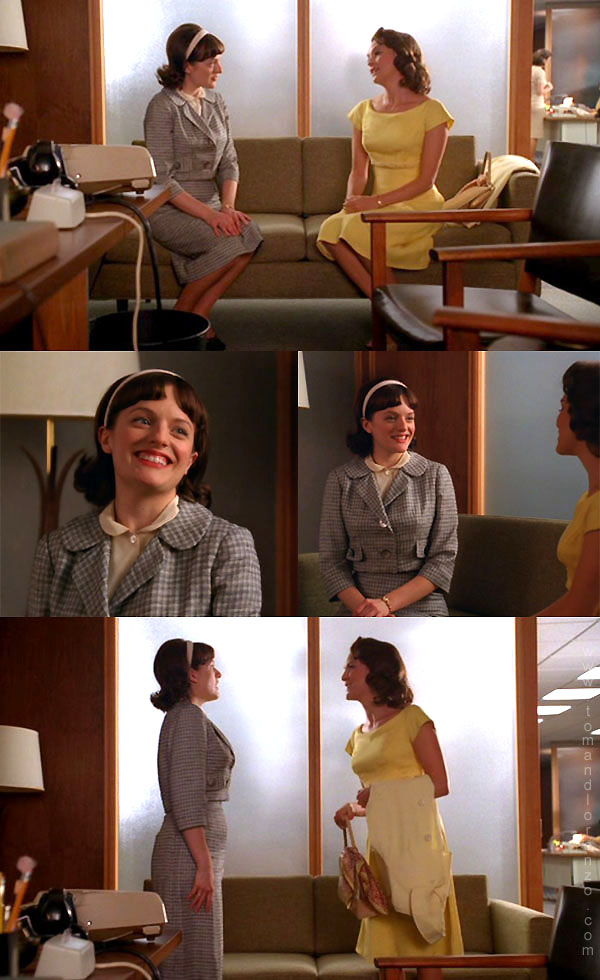 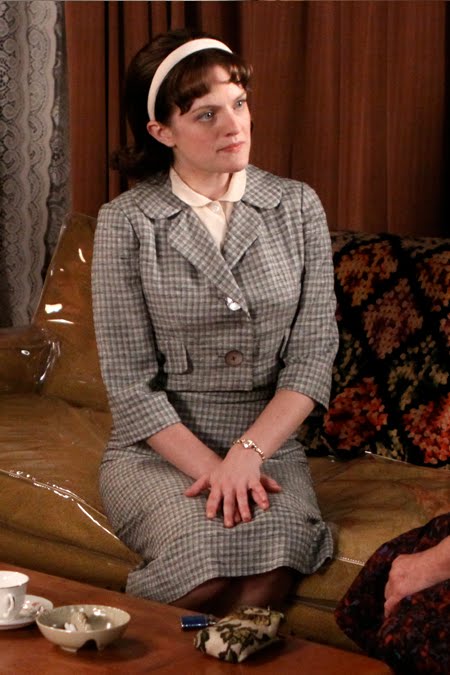 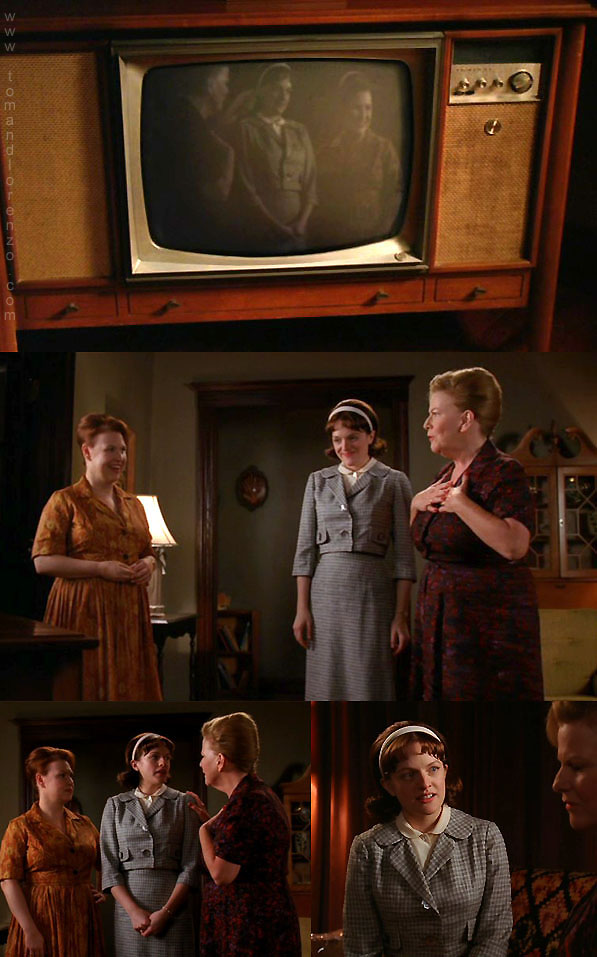 Peggy interviews someone who responded to the roommate ad. They hit it off, but mostly because Peggy strains mightily to be something she’s not. “I’m fun! I like to do…fun things!” Later, she gives her mother a new television set in an attempt to soften the news that she’s moving into Manhattan. Her mother’s no fool and it doesn’t work. She not only disapproves, she predicts she’ll be raped.

Another “bridge” outfit. With her new roommate, she looks fun and girl-ish. Sure, it’s a gray suit, but it’s in an eye-catching check and the headband really sets the look. Yet when she’s with her family, she suddenly looks very business-like and career-oriented next to their matching dresses. She’s the odd woman out in the Olson family. 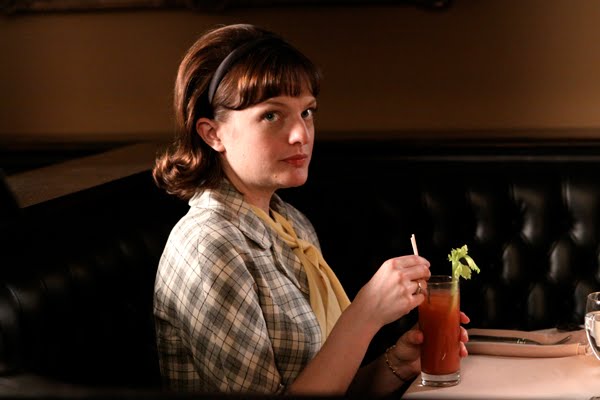 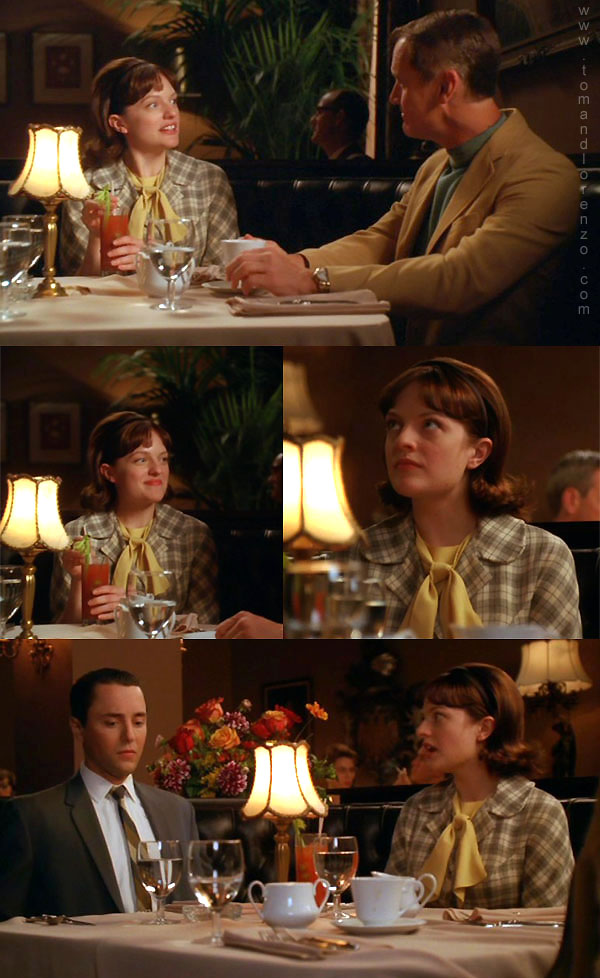 Duck Phillips invites Peggy and Pete (separately and unbeknownst to each other) to lunch in an attempt to woo them away from Sterling Cooper. Pete storms out angrily because he’s still reeling from the news last season that Peggy bore his child and gave it away. They are deeply uncomfortable with each other. Duck showers her with praise and tells her she’s wasting her time and her potential at Sterling Cooper.

Peggy comes into Don’s office to give him a baby gift because no one told her the office was going in on gifts. She takes the opportunity to nervously ask him for a raise, spurred on by her desire to live in Manhattan and Duck’s lavish praise of her abilities. She’s entertaining the idea of leaving SC, but she’s looking for a way to stay if Don could just show her the same kind of respect Duck did. Don (again, somewhat cruelly) shoots her down. She stares at the baby gifts and reflects, “I look at you and I think, ‘I want what he has.’ You have everything. And so much of it.” Don looks a little sheepish -after all, he didn’t exactly come from money himself, but he’s firm that he can’t give her what she wants. “What if this is my time?” she asks, then shuts the door behind her, dejected.

Suddenly, Peggy’s in the most traditionally feminine-looking outfit yet. In fact, it’s notable that the blues and yellows of her dress are picked up in the wrapping paper on the table, a subtle nod to the baby she gave up. She couldn’t have everything the way Don does. Although to be fair, we doubt she has an iota of regret over her choices. It’s just that she’s now realizing that she had to make those choices and men don’t.

Big happy bow! Smack in the middle of her outfit, which is an odd placement for her. Highlighting her womb? Maybe, but the costume design on this show isn’t normally that heavy-handed. Besides, the scene was less about the baby and more about her being a woman and how that’s a handicap in the business world, hence the bright colors and obvious feminine details.