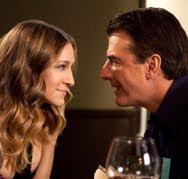 So you won’t have to.

Longtime minions may remember that we reviewed the first SATC movie and summed our reaction up thus:

Unfortunately, that assessment was positively glowing compared to our reaction to the sequel. Here it is:

We hated it. More than any movie we can remember. A truly awful, morally questionable 2 1/2 hours that was so bad it retroactively cast its badness backwards onto the far superior HBO series and 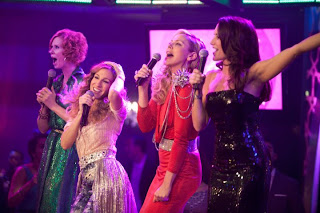 worsens it simply by claiming to be an extension of it.

There. How’s that for concise? Now you know. Avoid at all costs.

Oh, fine. We know that nothing will dissuade the SATC fans from buying tickets and truth be told, we wouldn’t try to convince any of them not to. What we WILL do is spent the next 1000 words telling you why we didn’t like it. There are no real spoilers ahead. Although really, there is no ending to give away. In fact, there was no beginning or middle either.

Our problem with the first movie (which was echoed by a lot of critics and viewers) was that it recast the SATC universe as one of pure fantasy. Everyone was richrichrich and wore insanely expensive outfits and lived in insanely expensive homes. In terms of conflict, either the problems were completely impossible to relate to (“My Vogue-sponsored wedding that everyone is talking about drove my man away!”), or the problems were mundane and the solutions were impossible to relate to (“My husband cheated on me! New apartment in Manhattan in 3 minutes! Whoops! I love him! Move back to Brooklyn!”), or the problems were mundane AND the solution was mundane (“I can’t get pregnant!” [pause] “I’m pregnant!”) or the problems were just silly (“My hot movie star boyfriend is so successful he doesn’t have time to fuck me!”). 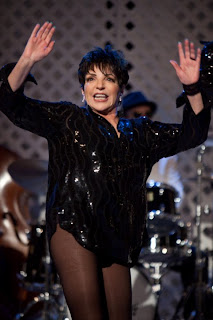 The HBO series wasn’t like that. Sure, it was about a group of relatively wealthy, educated white women in Manhattan, but the brilliance of the writing on the show was that it managed to take this very narrow slice of life and tell major truths about love and sex and relationships that almost anyone could relate to. It wasn’t about the fucking shoes. It never was. Unfortunately, the same can’t be said for the movies, especially this second installment. We had our problems with the first, but it at least felt like an extension of the show. An extension where everyone became more shallow somehow, but there were still glimpses of the old characters and chemistry. Well, it’s all gone now. Director Michael Patrick King blew it up in an orgy of silliness and consumption that would have left the Carrie, Miranda, Charlotte and Samantha of ten years ago shaking their heads. There is not one emotional reaction in this movie that makes sense for the characters or the situation. They were never complex characters by any stretch but they were miles ahead of the cooing, shrieking, gasping cartoon child-women we were subjected to onscreen.

Additionally, not one of the characters had anything that any normal person would consider a big enough pro 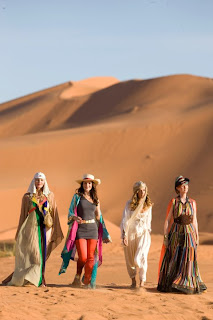 blem to hang a movie on: Carrie is disappointed that her 50+ year-old husband doesn’t want to go out on the town every night; Miranda’s boss is mean; Charlotte’s nanny has big breasts. Seriously, that’s Charlotte’s big problem. There’s no indication whatsoever that there’s any threat to her marriage. Harry seems as devoted to her as ever (as far as we could tell, since, like Steve, he got maybe 3 lines and appeared in maybe 3 scenes.) Samantha has no problems. She has conquered menopause.

Worse, the characters all react to their problems exactly the same way: by running away to an all-expenses-paid trip to Abu Dhabi. The whole point to this foursome was to depict various aspects of the modern woman: romantic, traditional, career-focused, and/or sexually voracious. The whole point to the show was to depict these differences and celebrate them. Now, they’re all virtually indistinguishable from each other, except for the unmarried one. She’s the slut who almost causes an international incident with her sluttiness that embarrasses the 3 married ones. That’s another characterization that would have had this foursome howling in indignation 10 years ago. Instead, they’ve all bought into the idea that they all fought so bravely against: that marriage is the ultimate destiny for women and those who “can’t” achieve it are flawed and embarrassing somehow.

Lest you get the wrong idea about what we’re saying here, let us just offer the following: the only scene that felt like we were watching our old friends was one wherein Charlotte and Miranda have a cute, funny, and frank discussion over drinks about how hard it is to be a mother. We have no problem with the more traditional life choices most of these characters made. Our problem comes from the underlying dismissal of non-traditional choices.

Nothing can illustrate this better than the painful opening scene depicting Stanford and Anthony’s wedding. Forgoing our disappointment with the Anthony/Stanford matchup (which, in the TV series had Stanford uttering the best summation of the pitfalls of gay dating ever written: “I’ve been rejected by 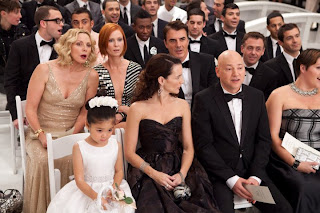 someone I wasn’t interested in. I hate it when that happens.”), we still couldn’t understand why this scene bothered us. Yes, it was ridiculously over-the-top and traded in every single gay cliche you could possibly think of (right down to an intensely embarrassing performance by Liza that was so bad its inclusion in the final cut told us something about how low the standards were for this film) but ultimately, that wasn’t what bothered us. After all, Stanford and Anthony already were walking cliches. They were conceived as such. No, what bothered us were the reactions all the main characters and their husbands had to the proceedings. It was like a day at the zoo for them. Very “Oooh, this GAY WEDDING sure is VERY GAY!” along with the visible discomfort or condescending amusement they all displayed, there was an even worse, overwhelmingly negative (akin to horror) reaction to the idea that gay relationships might be different than straight ones. And we all shouldn’t judge! Even though EVERY SINGLE MAIN CHARACTER WAS CLEARLY JUDGING THEM FOR IT. By the way, the thing they were judging the gays for is one of the worst stereotypes about gay people and one that’s particularly damaging when injected into a discussion about gay marriage.

Not that we think the movie is anti-gay in any way. It’s just pro-cliche in EVERY way. An Irish character appears and within SECONDS we are treated to both a “Lucky Charms” AND an “Erin go bra-less” joke. That’s the level of writing we’re talking about here. The franchise that originally had depth and wit to it like nothing else on TV now has characters named “Dick Spirt.”

Now, let’s get to the 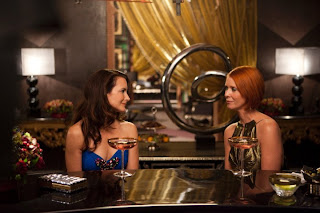 only reason we wanted to see the movie: the costume design. Like Michael Patrick King, Sarah Jessica Parker, and everyone else involved in this cash grab, Pat Field has seemingly forgotten everything about the show and the characters that made it a hit in the first place. From a clothing perspective, there’s barely a difference between the 4 main characters. Charlotte wears getups equally as outrageous as Carrie’s; Miranda is dripping with as much ostentatious jewelry as Samantha. In fact, the ostentation reached ridiculously unrealistic heights this time around. Carrie arrives home in the middle of the day from a weekend in Connecticut in 4-inch heels and a cocktail dress. She lounges on the couch at home watching movies with Big in a Halston gown. Charlotte makes cupcakes wearing vintage Valentino, Miranda rides a camel in a Louis Vuitton gown. On the show, it wasn’t uncommon to see Carrie running around town during the day in a do-rag and some funky vintage pieces. Miranda wore OVERALLS on the show at least once. The point was, these people were stylish but they were also REAL and had day-to-day lives. There’s simply no inkling of that idea anywhere. These people don’t have day-to-day lives at all.

We didn’t sit in a crowded theater, although there was a small crowd in attendance. We never heard more than a slight titter every now and then. Not only did we not laugh once; neither did anyone else in there, for the most part. The only scene that appeared to engage the audience was the “mom” scene with Miranda and Charlotte, which got some appreciative chuckles. Of course the end of the scene was greeted with pure silence. That would be when Miranda and Charlotte expressed wonder that any woman could raise children without the help of servants.

And speaking of servants, just like in the first movie, Carrie learns a valuable lesson from a non-white servant and expresses her gratitude by lavishing money on them. We won’t give away the details, but it was right there in plain view. Again.

We can think of no better illustration of the movie’s point of view than this: they hung the 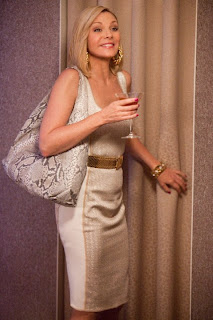 entire climax on whether or not the 4 of them will make it to the Abu Dhabi airport in time, otherwise they’ll have to fly coach home. And it’s not offered in a “Oh, aren’t these characters funny” AbFab kind of way. It’s REALLY treated as a horrible fate that they need to avoid at any cost. You’re supposed to WORRY that they might not make it to First Class.

We can understand how time and success can change people, but if these were real friends of ours rather than characters, we would have left them behind years ago precisely because they changed so much – and not for the better. For no reason whatsoever, in the middle of the film, the four women get up to sing a karaoke version of “I am Woman” and it’s not really treated like the joke it was. Instead, it was offered as an empowering moment, as all the women in the bar stood up to sing along. Ten years ago, all four of those characters would have witnessed such a scene with rolled eyes and sarcasm. They would have been the only women in the room still seated and making fun of the other women. Today, they’re the ones up on the stage vamping and shrieking in ridiculous outfits.