Betty does a little springtime pruning and smiles and waves to her neighbor while he releases his pigeons. She and the kids watch them fly away.

Betty in the middle of a tranquil suburban utopia. By all appearances she is living the dream her husband sells to millions of people every day. She quite literally looks like a living ad illustration. She could be selling anything from gardening equipment to sunglasses, it doesn’t matter. She’s the All-American ideal smiling in the sunlight and looking perfect.

Don and Betty go into the city to see Fiorello! During intermission she is introduced to Jim Hobart and his wife. Jim is a colleague of Don’s at a much larger agency and is interested in wooing him away from Sterling Cooper. When he’s alone with Betty he immediately comments on her resemblance to Grace Kelly. She tells him about her pre-marriage modeling days and he tells her that he could use her for a Coca-Cola campaign. He gives his card to the flabbergasted Betty.

Betty’s resemblance to Grace Kelly comes up again and again from a range of different characters throughout the series but this episode probably had the highest number of references to it. She is in a princess-like white dress that all but makes her glow in the room. Check out that long shot, she’s in a pool of light all her own. A perfect American princess. 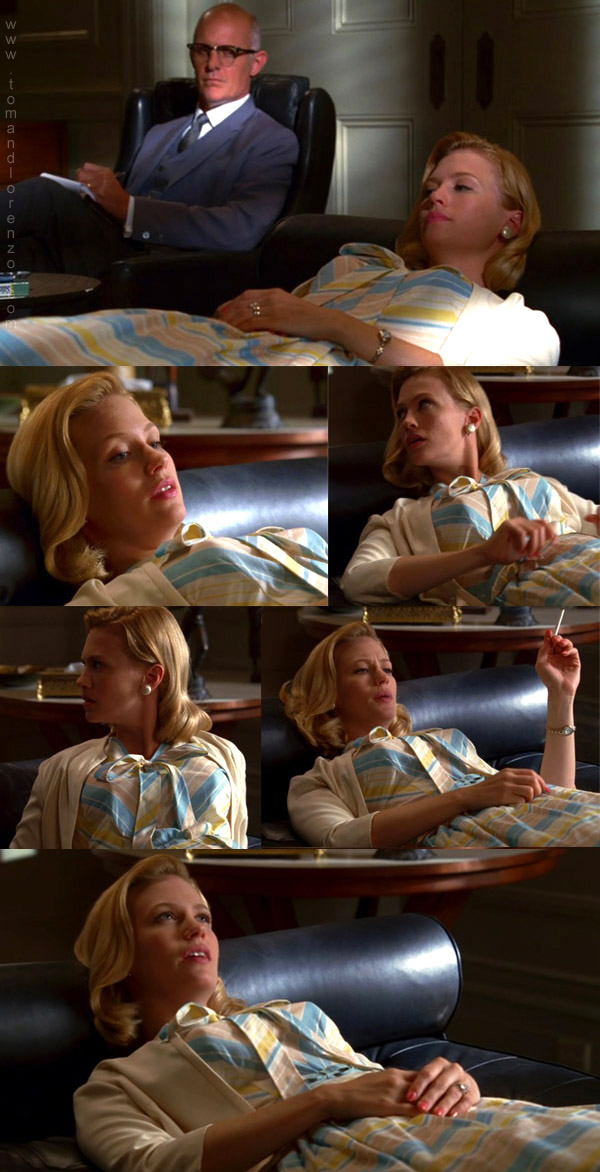 At her next therapy session all Betty can talk about are the travails of being pretty and having your mother call you a prostitute for pursuing a modeling career. When he suggests she has anger toward her mother, she snaps at him and defends her.

Because the focus of this session is on her mother and her obsession with her daughter’s looks, Betty is back to schoolgirl outfits in child-like colors. She looks like a baby nursery here. Beautiful but infantile.

Betty accepts Jim’s offer to come in and try for the Coca-Cola job. Lined up in a waiting area with a bunch of other models, Betty stands out in an old fashioned but nonetheless stunning dress.

All the other models are living and working in 1960 and here comes Betty from 1954. This is one of those rare instances when the subtext of the costume becomes the text of the scene. Betty is embarrassed by the old-fashioned extravagance of her dress and apologizes for being a little out of touch. 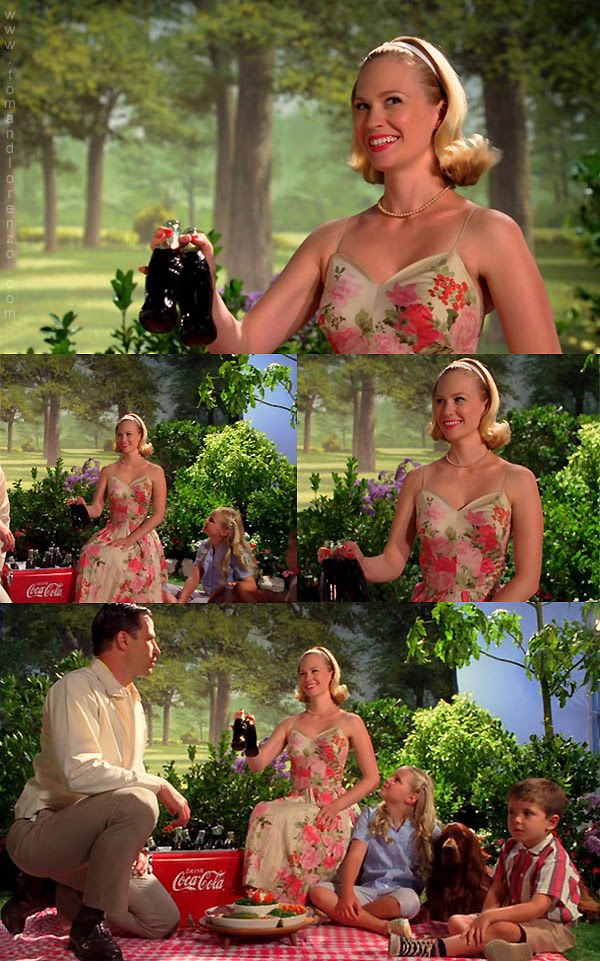 Betty gets the job because she’s being used by Jim Hobart to lure Don away from Sterling Cooper. She has her first shoot for Coca-Cola.

What’s notable here is how suddenly modern Betty looks, what with the spaghetti straps and the perfect flip ‘do. The underlying story of this episode was that Betty was trying to relive some of her own past in an attempt to regain some happiness in her life. It makes sense that there would be a notable difference between the way Betty Draper dresses and the way she is dressed for an advertising campaign.

Betty’s second shoot, after which she finds out that the client is going in an Audrey Hepburn direction rather than a Grace Kelly direction (although really, it’s because Don turned down Jim Hobart’s job offer). They weren’t subtle with the themes here. Grace Kelly was the 1950s and Audrey Hepburn is the new more international face of the 1960s. As beautiful as Betty is, she’s last year’s model.

If you want to compare Betty to the going-out-of-style Grace Kelly, what better time to do her up exactly like Grace Kelly? From the dress to the hairstyle to the jewelry, this isn’t a look that evokes Grace Kelly; it copies her down to the last detail.

Betty’s father Gene and his new lady friend Gloria arrive so the whole family (except Don, of course) can go vacation on the Jersey Shore. Betty detests Gloria and drives Don a little nuts with all her behind-closed-doors hand-waving and accusations.

We just love this outfit because it’s so casual yet so of the moment. You might not see it on a magazine cover of the period but practically every family’s got a picture of somebody wearing something like this tucked away in an old photo album. We love the way the top is casual yet perfectly fitted to her figure.

Betty comes home and is shocked to find a disheveled and frantic Francine waiting for her. She looked at her phonebill, something she made quite clear was a daring thing for her to do, and discovered that her husband has been calling a woman in Manhattan repeatedly. She comes undone and goes to Betty for advice. Betty gets a little defensive at this and asks why Francine would ever think to come to her for advice on this. Numb, Francine admits she doesn’t know. After she gets her out the door, Betty takes the Draper phone bill out of Don’s office and studies it for a moment before slipping it into her coat pocket.

We will see this coat so much in the next season or two that we’ve come to think of it as one of the character’s iconic looks. She’s worn this during many pivotal and emotional scenes. Here it does two things, it makes her pop out among the warm surroundings of her living room and then frames her against the cool blues of her hallway. Two rather stark uses of color with two different feels to them, both playing off the same costume. In addition, the fact that she plays the entire scene, from sitting down on the couch with Francine all the way to slipping the unopened phone bill into her pocket all while wearing a coat, gives it a feeling that she could leave at any moment. She’s got her coat on in her home while she’s contemplating whether her marriage is what she thought it was.

Betty discovers that Don has been calling her therapist and presumably discussing whatever she says in her sessions with him. At her next session she quite deliberately starts discussing her suspicions of Don’s infidelity and how hurt she is by it, knowing that it will get back to Don. A way for her to confront him without actually confronting him.

We think it’s fair to say that for Betty, one is supposed to go through life making costume changes along the way according to one’s goals. As someone who is so aware of her looks, Betty tends to change her style for various purposes. Here she imagines herself a clever schemer and dresses up as if she’s starring in a Hitchcock movie. She couldn’t get herself to do what she needed to do here if she didn’t have the right costume for it so gone are the child-like shirtwaist dresses and big poofy skirts in pastel colors. She needed to see herself as a femme fatale and who better for her to emulate than a classic Hitchcock blonde?