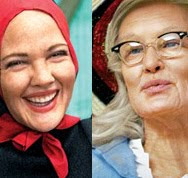 Last night, in a theater filled half with gay men and half with what appeared to be mothers and daughters, we had the pleasure of viewing an advance screening of HBO’s Grey Gardens, starring Drew Barrymore and Jessica Lange.

Before we go any further, if you haven’t seen the original 1975 documentary, you really should,

especially if you plan on seeing the HBO film. Part one appears to be missing, but you can start with part 2 here and work your way through the rest of it. In short, it tells the story of Big Edie and Little Edie, the aunt and cousin of Jackie O; Hamptons old money after the money dried up and no one cared about them anymore. Two charismatic and unique women living their lives in a crumbling old mansion, surrounded by at least a dozen cats (and God knows how many racoons) with nothing but their memories and each other to keep them company.

For reasons that we couldn’t possibly articulate, the documentary became a cult classic and Little Edie in particular became something of an icon for gay men. While it would be easy to declare their story merely tragic (and there is plenty of tragedy), the documentary showed that with all their fears and eccentricities and codependency, there was still a fierce bond between this mother and daughter and a deep, largely misunderstood love there too. Jessica and Drew (not to mention the film’s writer/producer/director, Michael Sucsy) had their work cut out for them. The original documentary has a fanatic following and any deviations or shortcomings could have been seen as

So, how did everyone do? Pretty damn well. Jessica Lange tops the list with an astonishing performance as she ages from her late thirties to her late seventies, nailing the mimicry the role required but also giving the character a depth and level of realism that’s haunting. Too often when an actor is required to play an aged character, they can never quite pull it off. There’s always something behind the eyes and under the layers of makeup that gives away the spark of youth. Not so here. As we said, her mimicry was letter-perfect (there are times when you’d swear they were using footage from the original film), but she also manages to convey that vagueness of thought and emotion that the aged so often have. The weariness as well as the nostalgia.

As for Drew, she definitely gave the performance of her life, although she’s a distant second to Jessica’s performance. She also nailed the mimicry and effectively conveyed the … we hesitate to say “craziness,” because Little Edie was so much more than that. We’ll just say “extreme unconventionality” and leave it at that. Like Jessica, Drew was required to play someone decades older than her but unfortunately the bubbly girlishness of Drew Barrymore shone through more than once, reminding us that this wasn’t a woman in her late fifties, but an all-too-recognizable woman in her early thirties. Still, she did an admirable job and like Jessica, there were times when you’d swear you were looking at the original footage.

If you loved these women, these unconventional, fierce, deeply damaged women, then you’ll love this movie. If you’ve never been exposed to them, you’ll still enjoy the film, but we can’t stress enough how much more you’ll appreciate it if you see the documentary first.

The movie goes much further than the documentary, showing the background and attempting to

offer reasons why they allowed themselves to decline. Unfortunately, Big and Little Edie never did fully answer those questions themselves and thus, the film can’t either. Still, we have to admit, it gave us much to think about; the underside of love and how it can warp into codependency; how even the fiercest, deepest love can wound as much as it sustains; and how a life (or two) can be completely derailed by one or two decisions that may have seemed minor at the time. As we said, the film couldn’t answer all these questions but we walked home from the theater in almost total silence, pondering them.