The hustle never stops for the Quinta Brunson, the multi-multi-multi-hyphenate behind “Abbott Elementary.” For Cosmopolitan’s final issue of the year — the Party Issue — the 32-year-old opens up about her meteoric rise, explaining what it takes to succeed in television, why her team calls her the best boss ever, and how she plans to spend her much-deserved winter hiatus. Plus, watch her Cosmo cover video — “Expensive Taste Test” — to see how Quinta does when we put her to the test on blasts from the past, including fruit roll-ups, slap bracelets, and chocolate milk. 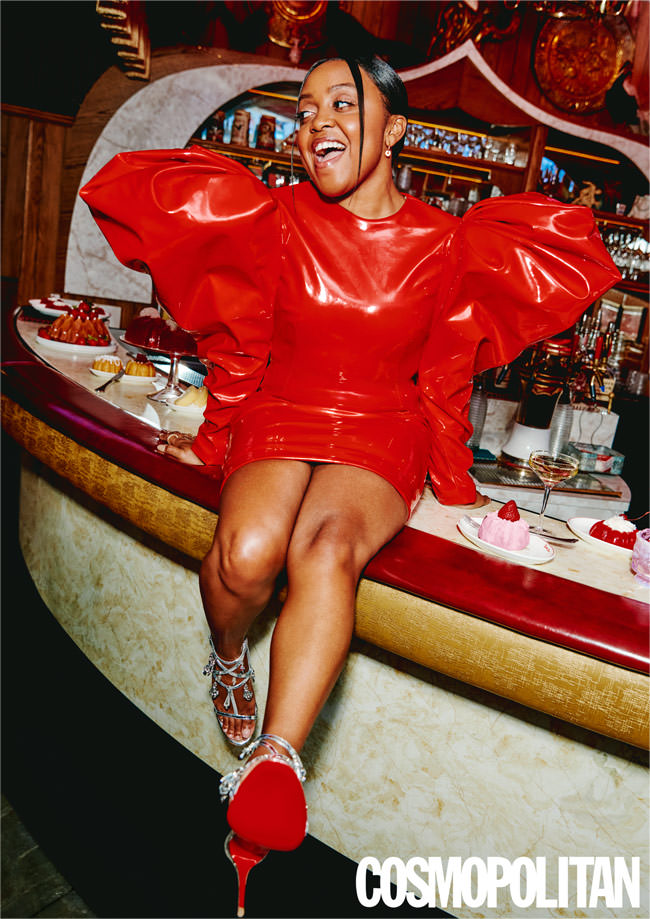 On how deeply Abbott Elementary resonates across all different audiences: “I can feel a chord that’s connected to everybody else, where I can feel what people would like to see right now or what would make people feel better. I think that’s why Abbott hits the way that it does. Even if we’re telling a really specific joke about Jill Scott or Lil Uzi Vert, there’s a way to craft it so that it will still make a white grandma in Wichita laugh, even if she doesn’t know the reference.”

On whether she’s taken time to celebrate her wins: “I’m just not sure that certain things have been processing the way they should. I’m finding my ways to celebrate, but it’s been a consistent grind. My focus is to make more Abbott and make it well. So while I’m grateful and appreciative for the wins, I just feel like I’m going through the motions…”

“I was recently telling someone older and way more successful than me that this period feels a little bit like a blur. But the person said that watching my wins has allowed her to remember her own wins and have this celebration she never gave herself. I was like, ‘Wow, that’s powerful.’ I look forward to the day when I can look back and remember, Ah, yeah. That was cool.”

On TikTok: “I got one just to have it in case I ever need to post Abbott stuff on there. As for other stuff, I was like, Ah, I could learn…mmm…no. I have no interest whatsoever. Even if I wanted to make a TikTok, I feel like there’s a high expectation and I’m like, Nope, not seeking any validation of any sort. So many people are doing incredible things on TikTok, like Tabitha Brown. But I’ve had my fill of creating content for the internet with the intention of making something that people would enjoy and that would go viral. I don’t really tweet my thoughts anymore. I just feel like I’ve moved to a different process of communicating with the world. Now I just wanna do nothing on the internet.

On the trouble with making extremely difficult and wonderful acts look so natural: “I think about that quite often. How do I try to word this without sounding like an *sshole? I don’t think that Abbott is easy to do. Similarly, I don’t think Insecure was easy to do. I don’t think anybody can do that. That was unique to Issa and her version of storytelling. It’s just funny because often with men, it’s like, ‘Whoa, they’re revolutionary!’”

On connecting with Issa Rae: “Issa and I chat. The last time we talked, four hours passed before we knew it. I just felt lighter. It’s like, Okay, someone understands these specific Black things that you go through as a woman running and producing a show, as someone who feels so connected to your stories. It’s hard because as Black woman creators, we still feel the responsibility of representation. But as artists, you want the freedom sometimes to not have to deal with that.”

Previous post:
Daisy Edgar-Jones in The Vampire’s Wife at the British Independent Film Awards Next Post:
Florence Pugh in Valentino at the 2022 Fashion Awards: IN or OUT?