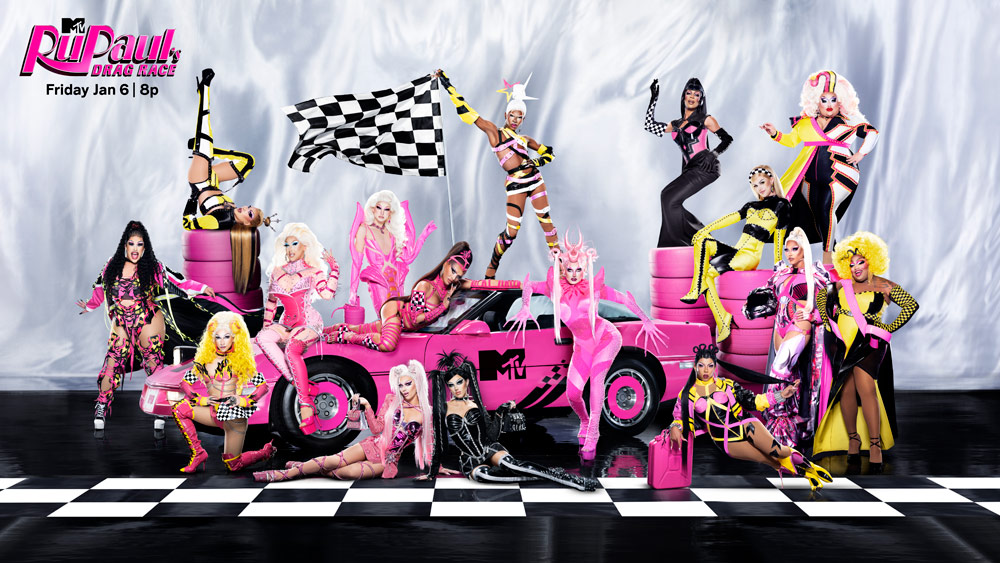 The bitches are back! And by that we mean both the cast of RuPaul’s Drag Race and these two recapping bitches. Season 15 of the flagship (or more accurately, mothership) of the franchise premieres on January 6th on its new home of MTV. We enjoyed a nearly five-year stretch where we were writing about Drag Race in one form or another every single week, but eventually, we had to make the choice to ease off recapping the international versions, lest we become an all-Drag Race site. But the rest has done us some good, because we’re genuinely excited about a new season of the show we’ve been recapping since Day One.

MTV today ru-vealed the cast for the 15th season of the Emmy® award-winning global phenomenon, “RuPaul’s Drag Race,” returning Friday, January 6 at 8PM ET/PT with a two-part premiere on its new home. The new season ushers in 16 dazzling new queens to compete for the title of “America’s Next Drag Superstar” and a cash prize of $200,000 for the winner – the highest amount in the herstory of the main franchise. Additionally, the upcoming season will feature the landmark 200th episode.

“RuPaul’s Drag Race: Untucked,” the Emmy® award-winning aftershow, will premiere immediately following on MTV. “Untucked” gives viewers a behind-the-scenes look at the backstage drama as the queens await their fate and see who will need to lip-sync for their life to avoid the week’s elimination.

Let’s meet the queens, shall we? A mix of pop princess and meme queen, Amethyst is here to make it crystal clear: She’s pretty, witty and… she came to slay. Her kooky comedy has scored her millions of views on TikTok, and now she wants to show the world why she’s the jewel in the crown of the Connecticut drag scene! Straight outta Sin City, Anetra is a self-described stunt queen who can deliver splits, dips and all the tricks to slay the stage. She may seem low-key at times, but still waters run deep. Plus, with serious taekwondo skills, she’s ready to take all the other queens out, one by one. Chop ’til ya drop! It’s time to get caught up in the electrifying aura of Aura Mayari! This high-kicking, high-energy Filipina goddess is known for slaying the stages in Nashville.  And watch out – because she brings a little sexy swagger to her drag. Attention, Earthlings: The Alien Queen has landed! Outspoken and out of this world, Irene Dubois combines Texan glam with Seattle wit and grit! Plus, she’s Bosco’s drag sister, so expect eclectic, extravagant drag, with a touch of high drama! Get ready for flips and twirls galore, because Jax is here to get things jumpin’! The self-described Simone Biles of drag grew up doing gymnastics and competitive cheer, and now she’s ready to go for the gold in the Olympics of drag! Originally from Connecticut, her style is a mix of banjee meets haute hip-hop honey. BAM! Construction worker by day, singing-and-dancing drag diva by night… Loosey LaDuca is ready to use all her tools to make it to the top! A perfectionist, powerhouse performer with killer curves and 12 years in the Connecticut drag scene, Loosey’s the ultimate mix of showgirl sass and campy charisma. She’s a queen who has it all… Now, she just needs a crown. Who ordered the diva-licious dazzler? Luxx Noir London is an effervescent ingénue whose stunning style is matched only by her no-holds-barred attitude. She’s always ready to tell it like it “t-i-s!” And while Luxx may be this season’s youngest queen, she’s got the confidence to take her all the way. Just ask her! Believe it or not, the sensational and motivational Malaysia Babydoll Foxx is the first-ever Miami queen to grace the Drag Race mainstage! A professional makeup artist and hair stylist to the stars, this opinionated foxy mama is bringing veteran skills and thrills to the competition, and she is not afraid to show these younger queens what real drag is! OMG, she’s the most popular girl in school – and mom’s favorite! It’s Marcia Marcia Marcia! This NYC ingénue sings, dances, and brings Broadway chops to the mainstage. And she’s got much more than a hunch – she’s ready to go all the way! Houston we do not have a problem! Hailing from the great state of Texas, Mistress Isabelle Brooks is the epitome of classic Southern drag!  She calls herself “Houston’s Heavyweight Champ” and trust, she came to pack a punch. Gutsy, glamorous, and full of attitude, our Miss Brooks was raised in the spangled world of Texas drag, and now she’s ready to rule the school. Straight out of a fairy tale — by way of San Francisco — Princess Poppy brings both beauty and an eccentric edge to the competition. She sings, raps, acts, and dances… All served up with a twisted sense of humor. She’s already been a TikTok sensation, but now this powerful young Princess wants a new crown. Make way for Connecticut’s grand diva, the Robin Fierce! A mix of Beyonce sass and Diahann Carroll class, this proudly bougie beauty is ready to shine her light for the world! She may sometimes have a chill vibe, but when she hits the stage, expect kicks and cartwheels for days! ¡Hola!  Salina EsTitties is a brassy, sassy Latinx diva repping L.A, baby! A fiery self-described combo of chola street style and campy comedy, Salina is a take-no-prisoners performer. From the bar scene to TV, film and commercial work, this saucy sister stays booked and busy! She’s got a mouth, big drag, and big plans to win. The iconic queen of the House of Colby has arrived! Known worldwide for her memorable reign as Miss Continental, and as Kerri Colby’s drag mother, Sasha is a queen to be reckoned with. This Hawaiian-born goddess has been slaying drag stages for 20 years, so she’s got to live up to her legendary reputation.  Serving body, beauty and bodacious all-around talent, Sasha is fierce. Officially. Hope you’ve got a sweet tooth, because social media superstar Sugar has arrived! She and her TikTok twin sister, Spice, may have come as a package deal, but when it comes to snatching the Drag Race crown, Sugar’s ready to taste victory all on her own. But how can you tell these twins apart? “It’s easy,” says Sugar. “I’m the prettier one.” Making herstory as one-half of Drag Race’s first-ever identical twin contestants, Spice has arrived with her TikTok superstar sister, Sugar! These living dolls may be new to performing, but they’re ready to double the fun and the drama this season. Take note: Spice is the edgier diva of the duo, and she’s ready to prove that she’s got plenty of flavor to stand on her own!

If you really want to get to know them, clicking through their socials is always a much better way to go, although we tend to tread lightly because we don’t want too much information affecting how we recap the show. Still, experience tells us that you usually can’t tell much from the initial promo shots, which are uniformly high glam, emphasis on the uniform. If nothing else, it looks like an extremely profesh cast. So, anyone catch your eye as the one to root for or the one to look out for?