Funny Girl star Lea Michele (five of the hardest-fought words in the history of show business) stopped by Jimmy Fallon’s place to show a little of what she’s got. We’re not talking about the dress. 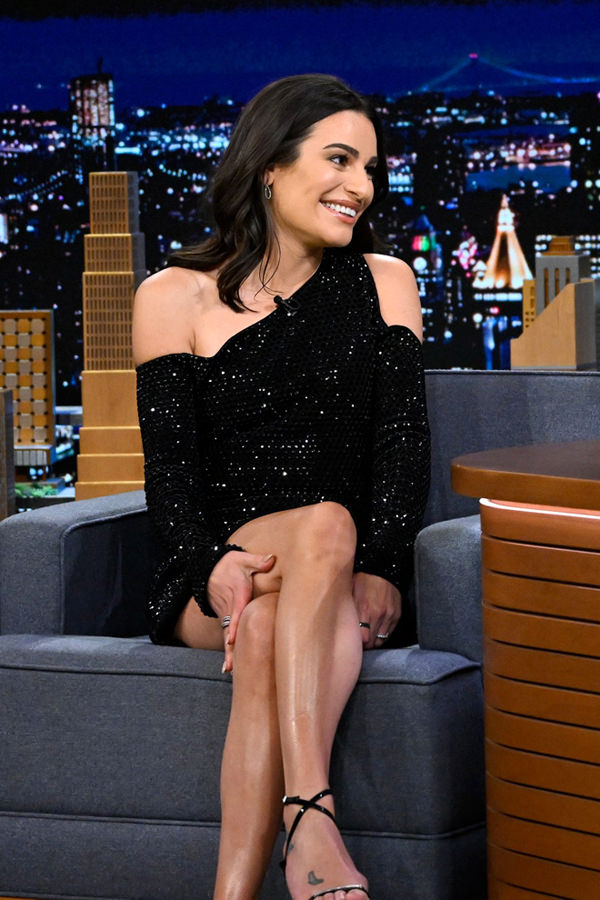 There was a time when her preference for teeny-tiny little dresses led us to simply write “Of course” each time she wore one, because there really wasn’t much else to say about them after a certain point. And look, we get it. People forget, but in the early seasons of Glee, Rachel Berry was an unglamorous role to play and like a lot of young stars who hit it big playing a character that doesn’t get to look hot, she opted to remind people that she was, well… young and hot. Think of Laura Carmichael playing Lady Edith on Downton Abbey. She’s simmered down a little bit in recent years, but back in the day, she put in the work to hotten herself up for any public appearances. Anyway, Michael Kors is always a good idea for a Broadway star’s go-to designer, because he understands glam and he understands New York like few others. This dress is pretty cute on her. We don’t even mind the shoulder situation. But this isn’t what were referring to when we said she was here to show off a little. We meant this:

Of course the Barbra comparisons are going to fly, but we honestly don’t think there’s any other way to sing this not particularly great, mostly nonsensical (it had to be said) song.  She sounds great. We especially like how much restraint she employs and control she displays in her singing of it. She’s always been a hell of a singer (can’t take that away from her, despite her poor reputation as a co-worker), but she’s showing some real maturity and development in her talent. She turned to Kors for her stage look, switching to the short dress after. Of course she wouldn’t wear a gown when there’s a chance to show off her legs. We kinda like how she wore such similar dresses. It’s not necessary to keep that sort of consistency, but it works well for a performance followed by an interview. We still don’t love midriff cutouts, but like the shoulder situation in the other dress, we really don’t mind it. Maybe it’s because it’s so low-key and minimal as a design, but it delivers the impact she wanted.