Home » Fashion » Friday Leftovers for the Week of October 27th,...

Friday Leftovers for the Week of October 27th, 2019 Kittens, it’s a testament to how much the stars stepped up this week that the red carpet scraps and pickins left over make up for a relatively short list, most of which isn’t too bad. It’s also a list that has Lena Dunham on it, so you probably shouldn’t get your hopes too high. Anyway, we salute you, celebrities of the week! You all did such notable style work that there’s hardly any half-assed attempts left to talk about! We get it. It’s a deconstructed romantic kind of thing. It’s not really to our tastes, but she’s well suited to it. The shoes make no sense, though. She’s working that hanging-strap trend that exploded this week, and we’re not sure the shoes really go with it all that well, but the jumpsuit’s kind of great. Even with the turtleneck. Yeah, no. We’re big fans of the “colorful casual suit with white kicks” trend, but he’s not particularly well suited to it and the suit here is too dark and badly fitted to work with the footwear. Cute, simple and photogenic. We have nothing bitchy to say. We have many bitchy things to say, but she does this for the attention so it would be counter-productive to say them. You guys do it. Again: we get it. It’s “Bondage Queen at the Prom” time and she is exactly the right gal for that particular niche. We really like the skirt, but we don’t like the design of the top at all. Kinda sure this event wasn’t a high-fashion sort of affair and we just can’t rag on an ally for showing up. Maaaaaaybe we’d have told her not to wear the plain white top because it never photographs well. Hey, remember how we’ve been bitching all month that practically no one can work the yellow trend because it’s just not suited to most people. Behold the exception that does not prove the rule because that saying never made any damn sense. Anyway, she looks freaking amazing in a gown that would overwhelm 99% of wearers. Ewan got the turtleneck/suit combo correct (and is more suited to it). The proportions, cut and monochromatic effect aren’t working for him at all. 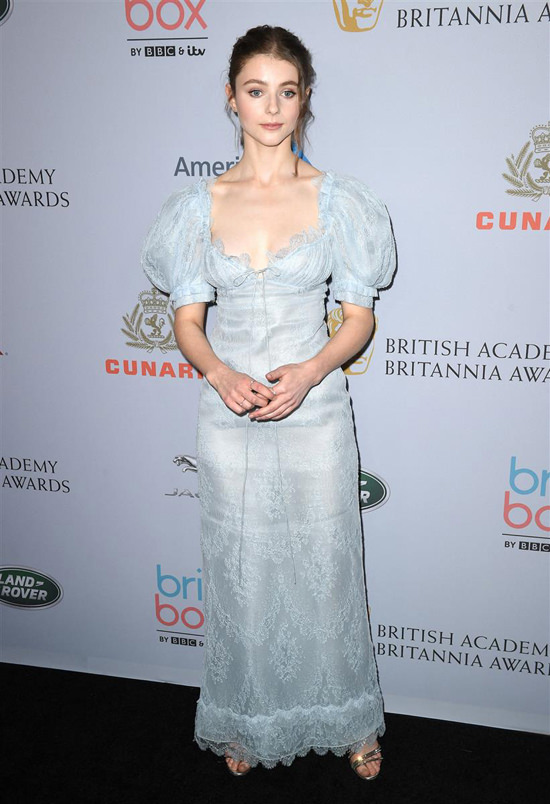 Not-so-deconstructed romantic. It never really goes out of style. We don’t love the color, but the design is pretty and mostly avoids looking like a nightgown. Even this frock has strappy shit hanging off. Damn, is that trend pervasive. Dazzlingly on point and perfect. One of her best in a long time.

Kittens, some very unforeseen circumstances have prevented us from recording a podcast this week and for that, we are truly sorry. We have to go off and take care of some stuff, but have a fabulous weekend, darlings!