D23 Expo: The New (and Not-So-New) Faces of Marvel Marvel faces new and old stepped out onto the Disney stage to hawk their upcoming wares. And while we’re only so-so on the Angelina Jolie/Salma Hayek/Kumail Nanjiani Eternals movie, we’re a bit more interested in the WandaVision series for Disney+, starring Elizaabeth OIlsen and Paul Bettany. Can’t say we’re dying for a Falcon and the Winter Soldier series (also for Disney+), but anything that puts Sebastian Stan in front of our eyes can’t really be said to be a bad thing, now can it? This is practically a work uniform for her. We picture an entire ballroom-sized walk-in closet filled with thousands of black or white slit-to-the-hip dresses. Whatevs. It’s her look. We just hope when she’s out there promoting what is likely to be an eye-popping candy-colored cosmic space saga that she loosens up a little on the fashion reins. 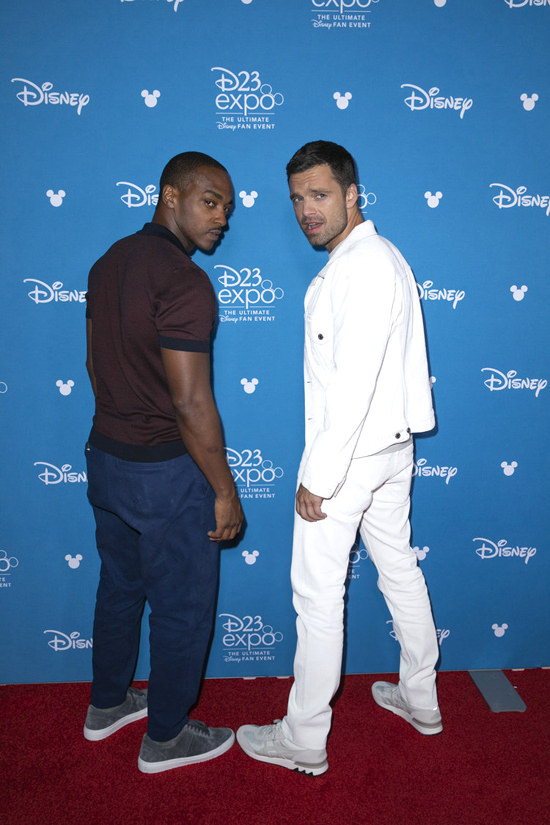 Mackie’s fine. It’s not the most photogenic look in the world, but he sure is filling out that polo shirt nicely. Stan is slaying here. We can’t remember the last time we saw a male star in a nearly all-white casual look – and pulling it off. He’s ready to step into the Evans-shaped heart throb hole in the MCU. While it makes a certain amount of sense for Agent Carter to show up in a deeply retro ’40s-inspired look (as part of the promotion for the What If? Marvel animated anthology series in which her character will appear), we can’t say we love this dress all that much. That’s a sharp little dress that looks great on her. We think the shoes could’ve popped a bit more. Damn, sir. You’ve been putting those Disney dollars toward a trainer, haven’t you? Nicely done. The outfit’s cute too. Bright, bold colors for your superhero promo work. That’s how it’s done. They look kind of adorable together. And their series, which was compared in the pitch to the Dick Van Dyke show, should be ridiculously interesting since he’s a dead-the-last-time-we-saw him artificial life form and she’s a witch. He is serving the perfect Snooty Prepster realness. She kept things simple, but wound up coordinating well with him. Don’t love the shoes, but the blouse is cute. This is the second time this month we’ve seen a flared suit on a ladystar and wound up loving it. The proportions are just right here. We’re only so-so on the top, but we loved the cuff sleeve of the jacket. It’s got a professional vibe to it, but it’s stylish enough for pictures.

Previous post:
D23 Expo: “Jungle Cruise” Stars Dwayne Johnson and Emily Blunt Keep it Pretty Next Post:
Awkwafina in Thom Browne at the D23 Expo: IN or OUT?