Because Disney will treat any part of its brand like an IP opportunity, they’ve made another film based on one of their theme park rides. Considering how much money they Pirate of the Carribean franchise made, we can’t say we blame them. Besides, the Jungle Cruise ride practically has a storyline built into it and you really can’t go wrong casting two of the most likable movie stars of the day. 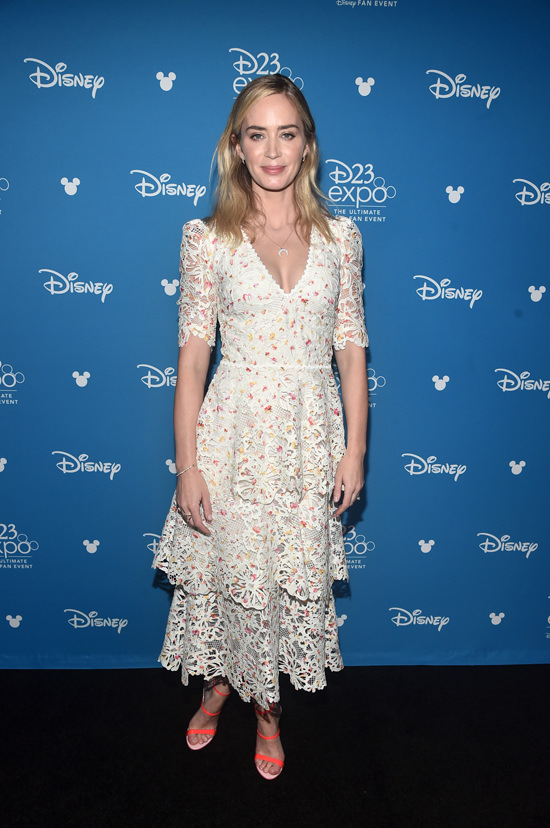 Why, Mr. Johnson. We do believe you’ve won this round – and in casual menswear to boot. It would be a feat for any male star to pull off such a thing while standing next to one of the most stylish female celebrities in the world, but to do so while also being roughly the size of a bull is something that demands applause and respect. LOVE the colors here. Love that the literal biggest action star in the world is wearing a shirt with stripes of peach, orange sherbet and pink. Love how the olive green works so well with these colors and gives the whole look an easy, sexy masculine vibe. Love the kicks. He really nailed this one.

Which isn’t to say that Miss Emily failed at her job. We tend to think this dress would look much better in a daylight setting, like a photo call or early evening premiere. The details are pretty, but so delicate they barely register on stage. We also think the final tier of the skirt should’ve been lined to keep it consistent. At first we weren’t really sure about the neon pink sandals, but they really pop onstage. They were a smart choice.