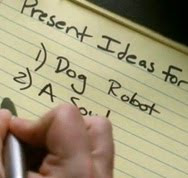 “I thought you hated the holidays.”
“No, I just hate you.”

Like no other show on television, Glee is perfectly suited to take on the task it assigned itself with this episode: to do an old school Christmas special. We enjoyed it more than it may have deserved simply because we weren’t expecting it. We’re kind of curious how the tween and teen viewers felt about this episode since it was overtly referencing a kind of television show that really isn’t done anymore: One song after another, stopping only long enough to stage short vignettes to advance a flimsy and wholly unbelievable storyline. Singing + schmaltz. Like something The Carpenters or Bing Crosby or The Osmonds would do, lo these many years gone.

In perfect Glee mashup style, it also referenced certain classic animated specials like The Grinch Who Stole Christmas and Rudolph the Red-Nosed Reindeer.

What’s fun about song choices like this is that it’s not one of those songs you hear often, yet you’re surprised to find out how much of the lyrics you know. Plus it’s appropriate, since the glee club is its own island of misfit toys.

Heather Morris knocked it out of the park getting her Cindy Lou Who on and we have to say, we thought that bit of reference was absolutely perfect. Sure, the dumb blonde stereotype is played out (then again, so are the dumb jock, pushy Jewish girl, mincing queen, sassy black girl, and bitchy cheerleader stereotypes), but Morris gave her a child-like giddiness that was adorable. “It’s a dollhouse. At least their dolls won’t be homeless.” No, of course it wasn’t remotely plausible; none of it was. Glee is sometimes at its best when it just gives in to its inherently unbelievable setting, even if at times it gets a little frustrating.

Meanwhile, Mr. Schu is going to spend Christmas alone because he’s a neurotic mess and a bit of a slut who foists his issues on everyone around him, alienating himself from all human contact because he’s divorced and Emma married her dentist. We’re kind of bored with the “together” Emma who wears toned-down versions of the slightly hilarious doll outfits she used to wear when she had OCD. All the fun’s been sucked out of the character.

Anyway, he tries to make something out of Christmas by having the glee club perform to raise donations for a shelter for homeless kids. In typical Christmas story fashion, you never actually see a homeless kid the entire time, even though all the action hinges on them.

This feels like classic Rachel to us. The Rachel we loved in S1; funny (her line about spending Christmas eating Chinese and watching The Main Event was hilarious and a perfect summary of her background) and awkwardly pleading for something rather than demanding it. They’re going to get back together at some point but they’re definitely more interesting when they’re not a couple and constantly stating how much they love each other. Besides, this sort of break up/make up/break up cycle feels feel more like high school.

Kurt’s living his own Christmas fantasy:

Charming if a little sexless. Then again, that may have been the point.

There’s something subtle in the way Blaine’s being written and portrayed; just enough of an undercurrent to make us believe that he isn’t the love of Kurt’s life. Notice the look on his face when Kurt mentioned not being allowed to sing the song in public and his parting words of “You are much better than that girl is going to be.” Given Kurt’s self-aware assessment that at least he’s falling in love with gay guys now, it’s got heartbreak written all over it.

Along with the male duet, the other major departure that sets this apart from the treacly holiday specials of years past was the fabulously subversive all-lesbian take on the Grinch, thanks to Jane Lynch and k.d. lang:

We don’t care how silly it got, that right there was worth the price of admission.

But we’re rocketing back to the schmaltz before we know it:

It’s a really cute version of “Last Christmas” and it suits the storyline perfectly. Finn does his best, thanks to the wonders of technology, but Rachel really shines here. We might be alone in this, but we think Lea might be better when she’s given bubbly pop songs, at least in the context of the show. Sure, she nails the Broadway Baby stuff, but that’s more to illustrate the character’s own lifelong Streisand fixation. When she’s singing pop songs, she comes off a more believable teenager.

We also really liked the Coach Bieste storyline and she’s quickly become one of our favorite characters on the show. We realize a lot of viewers have been pissed off at the tendency toward fat girl jokes this season, but we think they did fine work last night, having her stand up a little for “husky” girls who just want to look more like the other girls. “She put being husky to good use.” “Was her name Ricki Lake?” She gave that story some dignity and grace without coming across victimized or saintly. At least that’s how we read it.

And sure, buying Artie that electronic leg thingy (“I thought it was a Transformer”) probably made her a little too noble to be believable, but we’ll admit it, we got a little lump in our throat. We especially liked that they gave Tina a moment in that scene. She dated him too, and she’d be no less excited for him than Brittney. Actually, it was sweet how excited all of them were for him.

And the sappiness continued:

Come on, you grinches. It’s supposed to be a bit over the top. We just love that they traveled from the island of misfit toys and landed in Whoville at the end. The whole episode was like a Christmas special tribute band. We’re downloading that one. Should have been on the cast Christmas album, but we guess they didn’t want to give away too much of the episode ahead of time.

And so Sue’s heart grows ten sizes bigger and we have no doubt she’ll be right back to villainous, bullying Sue as soon as the story calls for it. We don’t care this time. It was fun. When Becky said “It’s beautiful” and Sue responded with “It is,” we totally believed it for just that moment. This is why Jane Lynch won an Emmy. We all know Sue is not going to grow and she’ll go right back to wanting to break the Glee club’s collective heart, but that’s the character. That she can inject her with these glimpses of empathy is a tribute to her skill.

We have no idea how the rest of the world saw it, not having read the twitter or the blogs this morning, but we thought it was fun and a perfect example of the appeal of Glee, that mixture of cynicism and sentimentality that makes the show both difficult and rewarding.

A mere sprinkling of LOL lines:

“You’re a regular Agatha Christie. Except even more sexless.”

“When does Asian Santa arrive?”

“Can I be honest? I don’t understand the difference between an elf and a slave.”

“I told my parents I only want one thing for Christmas this year: stop friending me on Facebook.”

“Last year I left my stocking up over Christmas vacation and an entire family of mice starting living in it. Their Christmas gift to each other was rabies.”