We expected the finale to be, in typical cable drama fashion, an explosive converging of various plotlines. And it was; just not in the way we thought it was going to be. We should have know 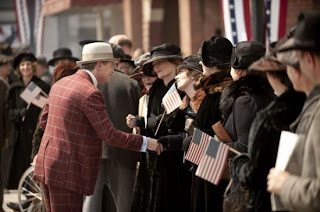 n better. The sometimes glacial plotting of this series is a feature, not a bug; a deliberate choice to tell this story slowly and to let the viewer come to their own conclusions. It’s a pretty daring thing to do, especially with an organized crime tale, but they pulled it off. The finale was emotionally satisfying while at the same time set up some rather alarming new developments for the second season.

Maybe we didn’t get explosions, but we did get to see the three main male characters, all of whom are deeply damaged, closed-off men, open up to the women in their lives and bare their souls to them. For all three of these very different men, such an act is seismic and very, very painful.

“I’m unhappy, Rose,” admits Van Alden to his wife. It’s only three words, but coming from him, it might as well have been a 15-minute soliloquy. He’s unhappy because, like St. Augustine in Carthage, “He did succumb to what was offered” in his Carthage-by-the-Sea, 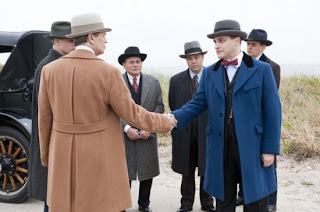 Atlantic City. Clearly, Margaret’s rejection, sleeping with Lucy, and murdering his partner have all left him floundering and unsure of himself. He’s ready to leave his career as a federal agent and buy into his uncle’s feed business. Rose has other ideas; she’s far too concerned with appearances and with the social standing she gains as the wife of a federal agent. Nelson is a bit repulsed by her naked ambition. “If God wants me to stay in AC, let him give me a sign.” Like most religious zealots (and please bear in mind we said “zealots”), he has an enormous ego, comparing himself to St. Augustine and demanding that God make his decisions for him. Well, he got his sign but it wasn’t the one he wanted. Lucy is pregnant (or at least she says she is) and we have absolutely no idea how that’s going to shake out. She’s not exactly a girl brimming with discretion and decorum.

Meanwhile, at the Darmody household, Tommy and Angela are both terrified of Jimmy and she’s not particularly concerned with hiding it anymore. There was a fatalistic feel to her confrontation with him, as if she expected to be killed. To be honest, we keep expecting it too. Instead of getting violent with her, he opens up to her, in a typically intense manner. “There 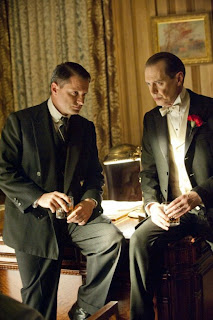 are things inside me that I brought home from the war.” One of the things we do enjoy about this show is the way they present things like post-traumatic stress disorder or postpartum depression but make sure that the characters don’t speak of them using anything approaching modern terminology or understanding. Witness Nucky’s description of his wife’s chronic depression: “Melancholia.” Just that admission on Jimmy’s part, that he is damaged by the war and afraid of what that means for his family, was enough for Angela to relax a little and even admit to the affair with Mary. Surprisingly, Jimmy is forgiving. “We both did things when we were apart, for whatever reason.” Still, we can’t say things are any better off in that family, since Angela cut off all her hair in direct response to Jimmy’s teary admission that he used to dream of her long hair when he was in the trenches. Honestly, we have no idea why Angela chose that moment to be defiant toward him. Does she not want a healthy marriage with him or is this just her way of saying the past is the past?

Nucky’s too busy with politics to think of opening up to anyone, or at least he thinks he is. He’s whipping the party bosses into line to get Bader elected Mayor, bartering with Chalky to secure the “colored vote,” and dealing with an unexpected attempted murder against the Commodore. Turns out the maid was the one poisoning him, and given how terribly he’s treated her in the few scenes she’s appeared in, we wish she’d managed to pull it off. “He treated that dog better than me.” Nucky paid her off to get her out of town, but we’re not sure why, exactly. What does he gain (because surely he did it for gain) from ensuring that she doesn’t go to jail? And what’s the book she gave him?

And if that wasn’t enough to keep him busy, Torio brings together the warring factions together to settle a truce, since all involved agree a prolonged crime war will be expensive, bloody and to the benefit of no one. Rothstein makes a deal: one million in cash to Nucky for quashing the coming indictment against him, plus the location of the D’Alessio brothers. Rothstein gets off, Nucky gets revenge, and, being the consummate politician, he spins the whole thing into a plea vor the public to vote for Bader.

He’s riding high at the moment, but the storm clouds are gathering. Jimmy, Eli and the Commodore are all tired of being pawns in his little chess games. “There are consequences to what you do, what you say,” warns Eli. Nucky has little regard for him so he ignores the warning. Jimmy’s drunk and belligerent. “You’re my hero,” he tells him, sarcastically. “You’re like a machine; clean, fast, totally devoid of any emotion.” Still, of all the men who have reasons to hate Nucky, Jimmy’s are the most personal. “I thought you loved me.” Nucky reminds him he’s not his father and that’s enough to send him running to the man he’s spent most of his life hating or fearing. The Commodore has his own long history with Nucky and his own reasons to hate him. “You’re going to take back Atlantic City for the both of us,” he tells Jimmy. With Eli on board, those are three very powerful enemies to have because unlike other mob bosses like Rothstein, these men know him fairly well.

But not as well as Margaret, at least not now. She’s not Angela or Rose Van Alden. She’s not going to sit around and wait for a man to open up to her. She’s going to march right up to him and demand that he do so. It’s a testament to the power she has over Nucky that he actually complies, telling her a story of his life that’s both heartbreaking and horrifying. Margaret is deeply touched but it’s not enough to get her to reconsider her plans to leave AC. “There’s a kindness in you. I know it. How can you do what you do?” Nucky basically sums up his life philosophy to her: “We all have to decide for ourselves how much sin we can live 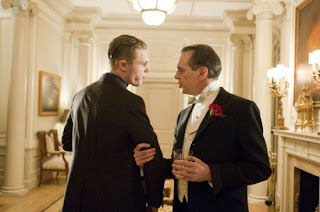 with.” It’s not enough of an answer for her.

It isn’t until she gets the rag in the barnbrak that her plans shift. God bless good old-fashioned Irish superstition. Like Van Alden, she waited for higher powers to tell her what to do. The slightest indication that her path is leading her right back to poverty and all bets are off. She puts on the showiest thing she’s ever worn, goes to the victory party, and promptly asks Nucky for a drink, which shows you just how far she’s come from her days as a member of the Temperance League and a women with a violent husband. As Nucky pointed out to her during their argument last week, she goes through the motions of pretending to have a higher set of morals, but in the end, she enjoys the power of being Nucky’s mistress and she’ll do whatever she has to to ensure she’s never poor again. In other words, she’s figured out how much sin she can live with, apparently.