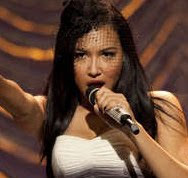 “What has become of us, Kurt?”

We had a terrible epiphany last night watching this show. We think the gimmicky theme episodes as well as the occasionally equally as gimmick Very Special Episodes might actually represent when the show is at its strongest. Because last night the writing was pretty tight, the plot moved along, the characters felt recognizable and consistent, and yet, we were pretty bored throughout the whole thing. In retrospect, that was partially because there were no real LOL moments and partially because the musical numbers failed to wow us.

One thing we really liked was the show doing what it occasionally does very well: directly addressing its critics in the dialogue. Emma’s criticism of how stale Shu’s direction has become is one that many critics of the show have made: Finn and Rachel’s endless ballads, followed by a classic rock tune where Mercedes will belt out the final note. Shu being Shu (which is to say, erratic and prone to sudden changes based on a single observation or criticism) he immediately, a week before sectionals, decides to switch out the approach that won them sectional last year for one that immediately puts the team in danger. Honestly, even though it made no sense whatsoever, we were fine with it. This is who Will is, after all. His heart’s in the right place but he’s something of a mess and he tends to force the glee club to work out his issues for him. In other words, plot-wise it made no sense to bench the heavy-hitters but from a character standpoint, it was dead on.

One other thing we liked was the slight move toward making Kurt and Rachel more friendly with each other. It never gets stated outright (and it probably should because it’s odd that it’s not stated) but Rachel should have something of an affinity with Kurt and a connection with him based solely on the fact that her parents are a gay couple. And Kurt would naturally have an affinity for the Streisand-esque Broadway Baby, no matter how obnoxious she gets. The gays will forgive a lot of their divas.

And speaking of the gays, we welcomed the very subtly played idea that not only is Dalton Academy not nearly as utopic as we’d been led to believe, but that Blaine is not the perfect specimen that Kurt thought. For one, he’s terribly condescending and sounds like a bit of a snob. For another, it’s the height of hypocrisy for him to lecture Kurt about being a team player when as far as we can tell, he sings lead all the time and treats the rest of the team like backup singers. In fact, it just occurred to us now, but Blaine might turn out to be a slightly less obnoxious gay male version of Rachel.

We can’t hear that song without thinking of appliances. It’s been ruined by way too many commercials.

As an aside, we’ve been getting a little peeved with some of the other Glee reviewers and recappers out there, especially the professional ones, complaining so much about the focus on Kurt this season. For one, his bullying and coming out storylines haven’t occupied nearly the screen time that something like, say, Quinn’s pregnancy or Will’s marital problems did last season. For another, and on behalf of the gays, kindly shut the fuck up. 99.99999999% of all network television programming revolves almost exclusively around straight people and straight relationships. Rushing to be the first to roll your eyes at the bullying storyline and the supposed elevation of Kurt to sainthood only makes you sound like an asshole. It hasn’t been handled perfectly – that wedding was a bit over the top – but it’s far from the overdone storyline some reviewers are complaining about. Criticize it for how it’s being handled, but stop complaining about the focus on it.

Anyway, Schu essentially tosses the playbook, which throws the club into disarray, which only gets worse when Santana tells Rachel about Finn, in front of the whole group. Finn and Rachel as a loving couple is kind of boring (although not nearly as sleep-inducing as Quinn and Sam), so we don’t mind where this is going. Again, it feels a bit like a response to some criticisms. Pretty much everyone in the cast openly talks about how unlikable Rachel is now. The fact that PUCK, of all people, turned out to be nicer than her (at least insofar as cheating on Finn goes) really drove home the point that the girl needs to work on her people skills. “You used to be sort of unlikable but now I just feel like punching you every time you open your mouth.” Pretty much sums it up.

All of this comes to a head on sectionals day, which is where the show really went into overdrive to depict how much the club has changed in the last year. There were constant references to last year’s “Sectionals” episode, most of which did not paint the current status quo in a very good light. They’re no longer the scrappy underdogs and they’ve become complacent and take each other for granted, a meta-commentary if ever there was one.

On the other hand, we guess we’re supposed to be wowed by how the team came together for the show:

But we’re mostly not. “The Time of My Life” was AWFUL. For one, it’s a horrible song, for another, as cute as Sam and Quinn are, they don’t have nearly the charisma to keep us interested in them and to be honest, hearing Quinn’s sweet but rather thin voice struggling its way through the vocals only highlighted how stupid it was for Schu to bench Rachel.

Santana always delivers, though. And the dancing was fun, courtesy of Mike and Brittany, but these numbers can’t hold a candle to the “Don’t Rain on my Parade” and “You Can’t Always Get What You Want” numbers that won them sectionals this year.

In the end, it was a tie between the Warblers and New Directions. It makes sense from a storytelling perspective. All through the episode, we knew ND was going to win (because what’s the point of the show if they’re not a competitive show choir?), but considering how ill-prepared they were, it would have felt false and unearned on the part of the writing had they taken first place on their own. Besides, there’s obviously a story playing out that will eventually get Kurt back in McKinley High and the Warblers are part of that. They need to be a threat to glee.

Anyway, we didn’t hate this episode at all, but it does distress us that the show can do side-splitting comedy, tear-inducing drama, fantastic musical numbers, and provide interesting payoffs for its characters; it just can’t do (or rarely does) any of those two things in the same episode. Last night was plot night and it was much needed, but everything else felt like an afterthought.

Although that is a fun number.