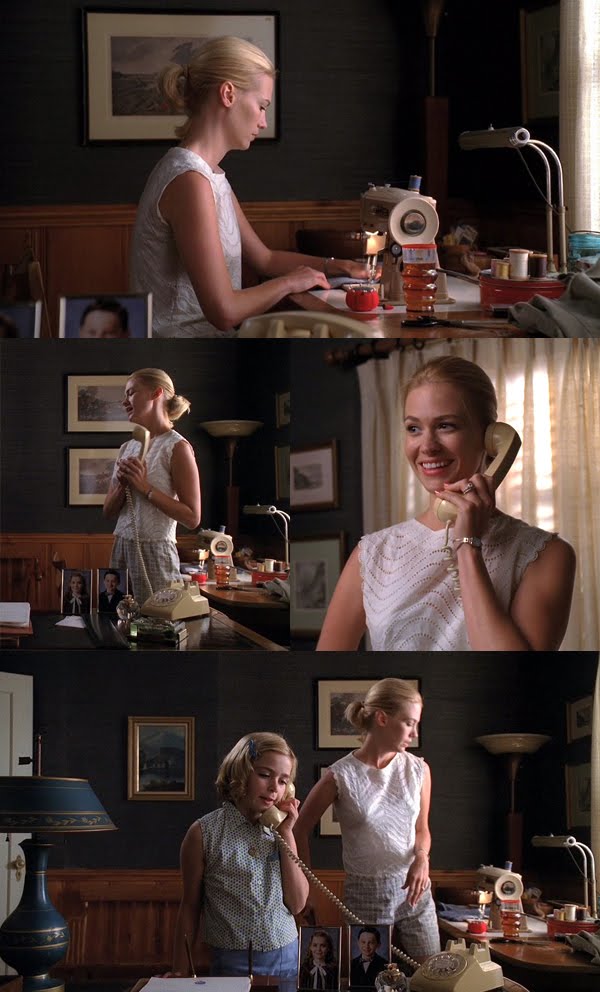 We weren’t sure we were going to include the screencaps from this scene until we noticed the sewing machine. We just know something like that is going to prompt a dozen “My mom had that!” responses.

Notice how Betty and Sally are wearing pretty much the same outfit in different colors. Betty was the warmest we’ve seen her all season in this scene, plus she was a little girlishly excited about the prospect of Sally seeing the Beatles. It’s like she let down the Mom Guard for a second. We forget that Betty is a young woman. The similarities in their styles illustrate the point. 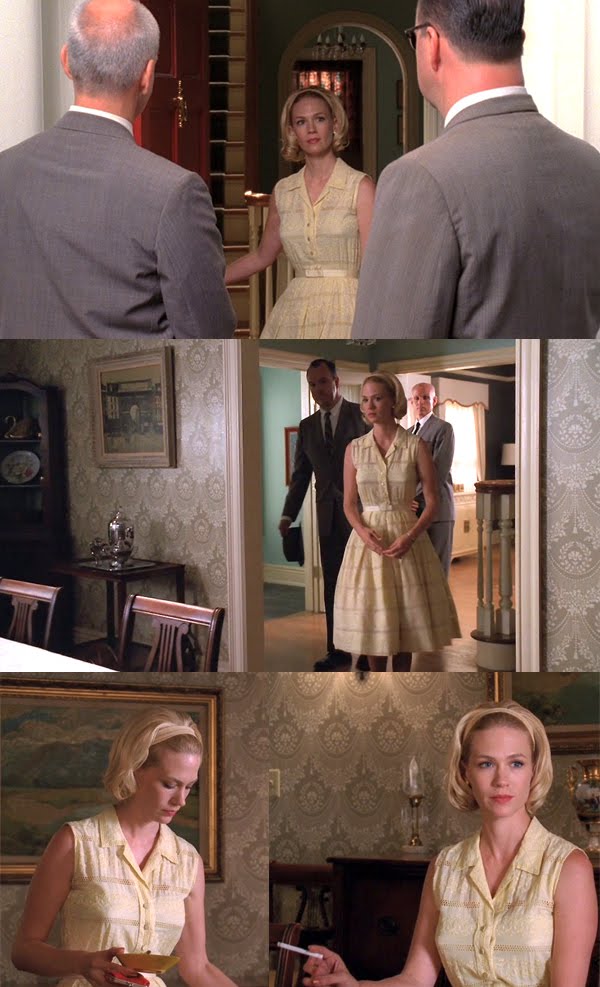 Betty’s been presented in slightly different looks this season; befitting her age and the fact that she entered into a second marriage with a much older man, her look matured and hardened a bit. This look, on the other hand, is pure Betty Draper. This scene had the wreckage of her former marriage surface suddenly and unexpectedly and the clothes hearken back to that time.

Not much to say about the bunny uniforms but we knew we’d hear it if we didn’t include them. Both the costumes and the set are period-perfect. 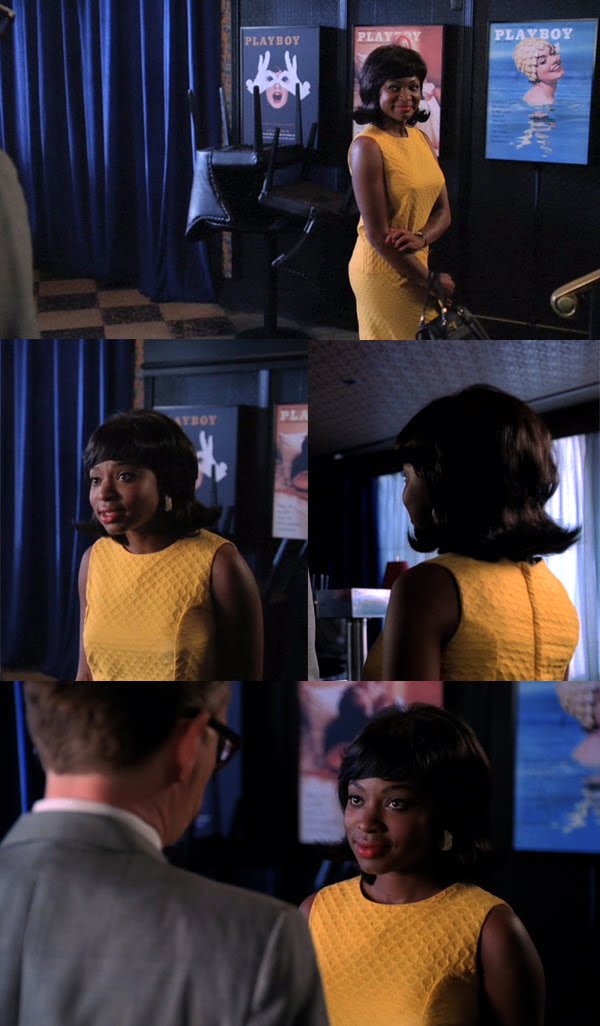 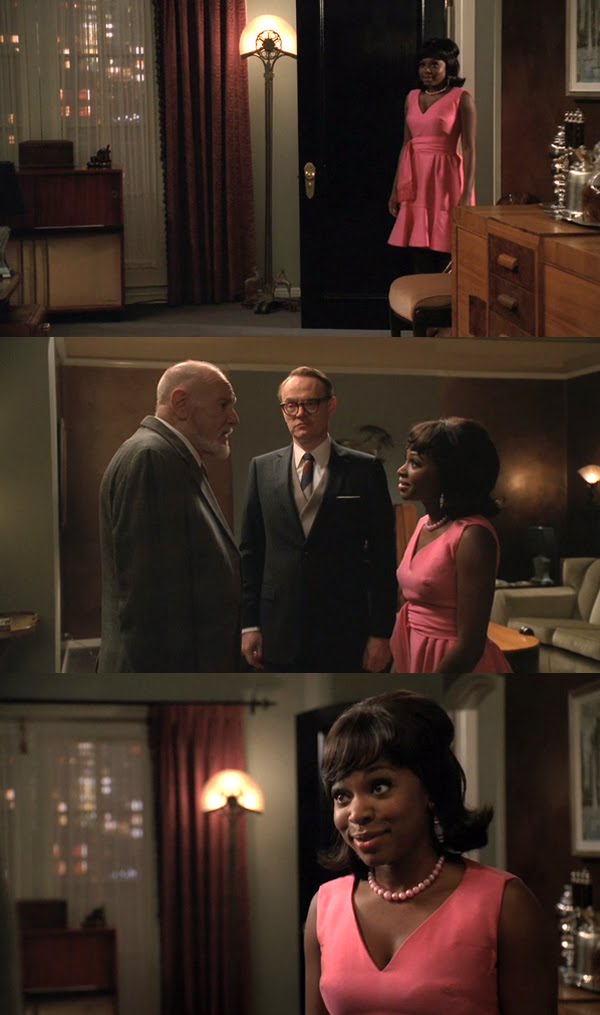 We really hope Toni sticks around because the show is seriously lacking in that mid-to-late ’60s black girl fabulousness. The ’60s were a watershed moment for fashion and the look of the African-American woman was a huge part of that as iconic women like Dionne Warwick, Diana Ross, and Diahann Carroll redefined beauty for the times.

Anyway, she looks adorable in both these looks. She obviously favors cute little dresses in highly saturated colors. Putting her in scenes with the uptight Lane and his even more uptight father, both of them wearing darks or neutrals, hammers home the point being made: color has arrived into this world. Toni would be a contrast no matter what she wore in these scenes, but making her the brightest color in the shot helps tell the story. She is, quite literally, a woman of color. 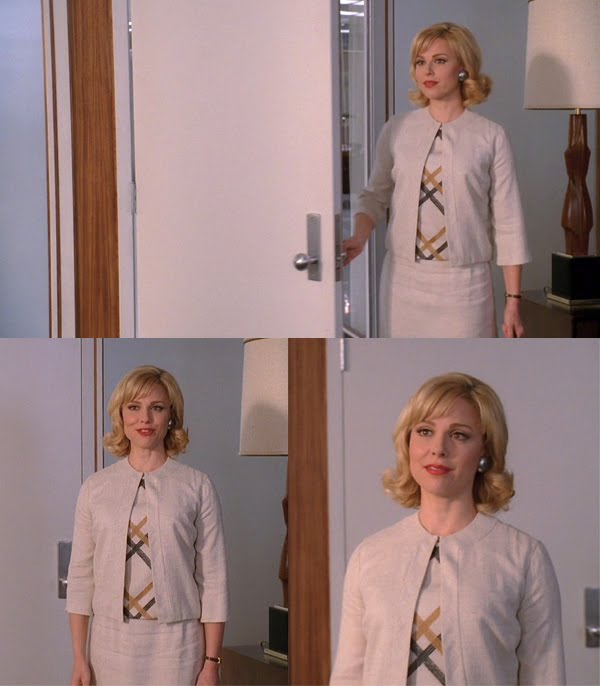 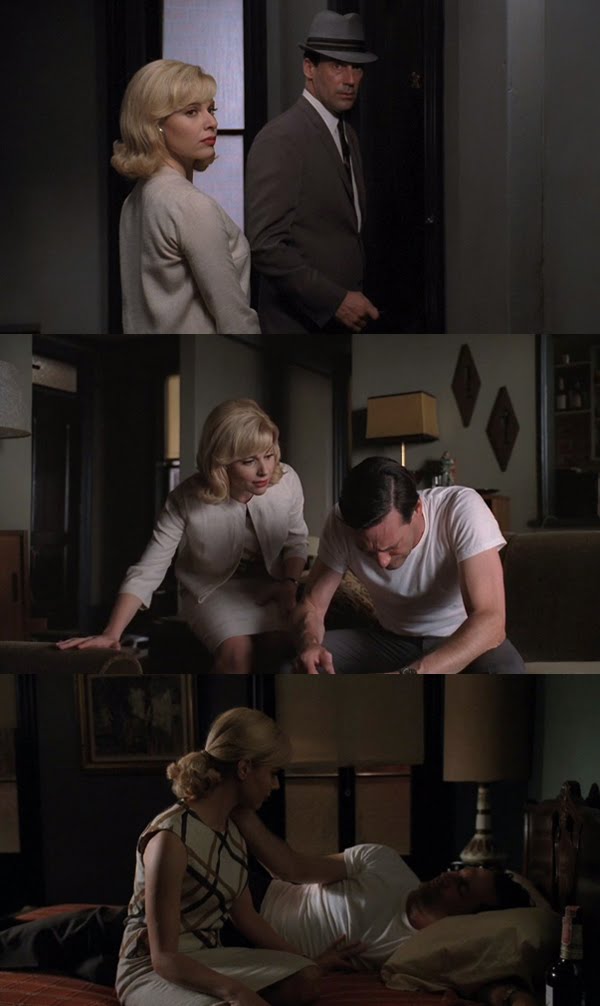 Gone are the black suits, worn to downplay her femininity in a world of men. Her relationship with Don has allowed her to be a little lighter and less armored. She gets to sport a lot of variations on her hairstyle but when they put her in such a literal Betty ‘do, it serves to highlight their differences. Don confessed everything to Betty sitting on the bed in their bedroom. He does the same thing here. Yet Betty was angry and distant (which, admittedly, is entirely reasonable) while Faye was concerned and supportive. 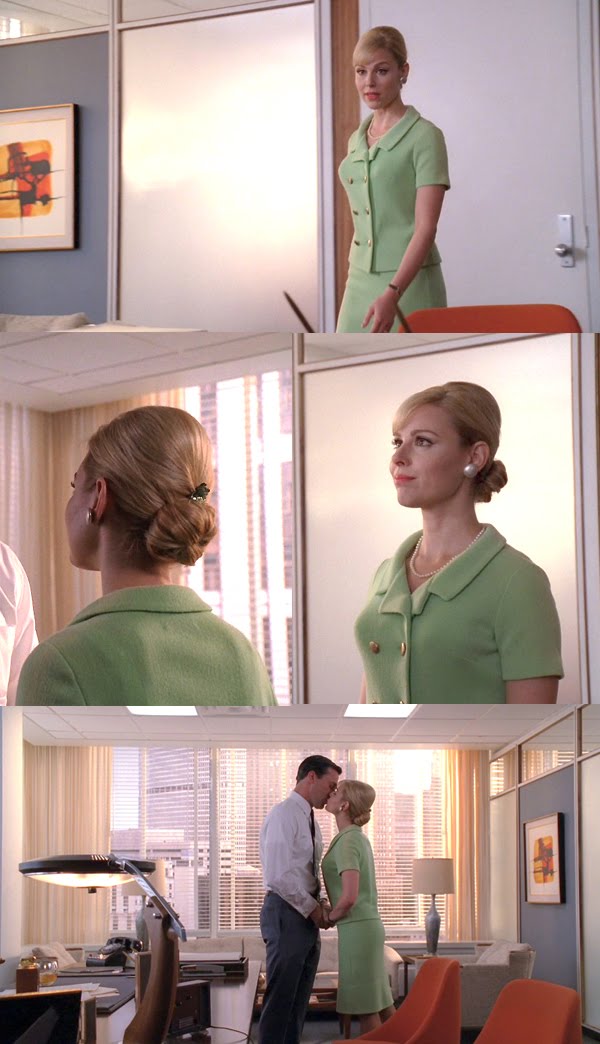 What’s interesting about this look is that it almost looks like it could have come from Megan’s wardrobe with the collar and the rows of buttons and the bright color. If Megan really does become Don’s next romantic interest, then there was a through-line in their looks. Betty to Faye to Megan. Almost as if Don needed Faye to get over Betty. Which is pretty much why you should avoid being the rebound. 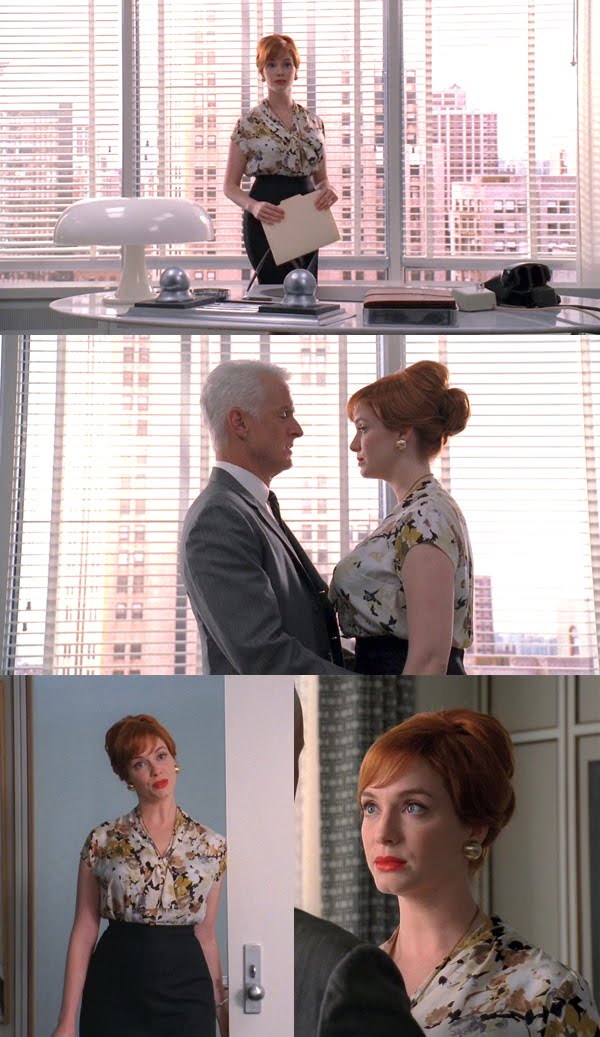 Much earlier in our Joan Mad Style posts we pointed out that she essentially wears the same outfit over and over in different colors and fabrics. She’s practical that way. This is at least the 3rd or 4th version of this look we’ve seen this season: tight, high-waisted dark skirt with a blouson top in a busy print that doesn’t flatter her.

Joan normally wears a lot of bright or saturated colors. It’s interesting to note how dark and a little depressing the color scheme is here, befitting the mood. Check out the look she is giving that doctor. You don’t refer to Joan Holloway Harris as “ruined,” asshole.

This dress is very similar (although less fabulous) to the one she wore to the Clio awards, with a softly gathered scoop neckline and a busy floral print. If you were to open Joan’s closet she’d have three outfits in 40 different colors and patterns. We’ve noted in the past that Joan tends to wear these busy florals when she’s in some sort of emotional turmoil and she’d have to be in the most turmoil ever for a scene like this, where each character briefly toys with the idea of completely upending their lives. 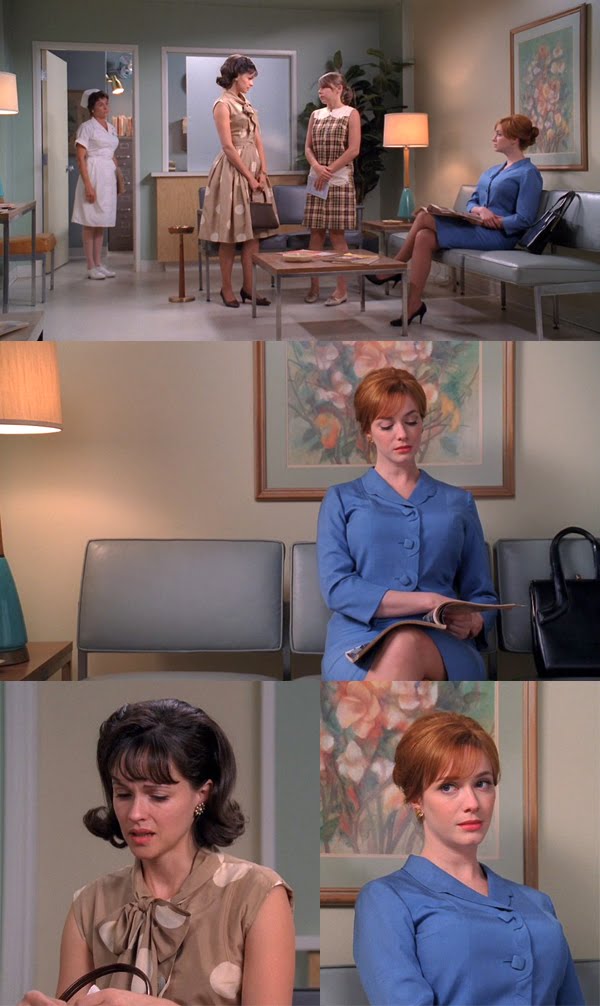 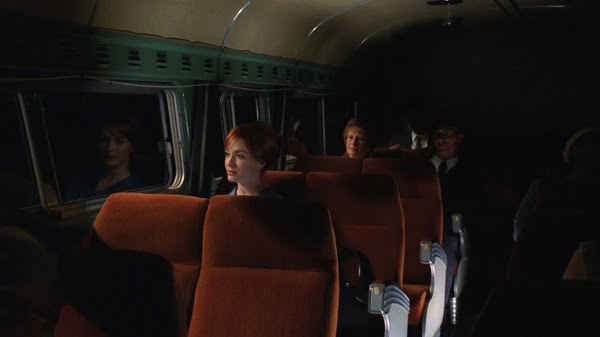 Again, we knew we couldn’t get away with NOT including a shot of that bus interior.

Joan is dressed very maturely here. It’s like she’s taking a page from Betty, who dealt with her potentially scandalous life change by suddenly dressing ten years older in a bid to look more respectable. Well it worked, much to Joan’s chagrin. She got a cold slap that reminded her that women of her age and position weren’t “supposed” to get abortions and she got a reminder that her options for having that baby she wants are rapidly dwindling. Not because 34 is so old, but 34 with a husband in a war zone suddenly makes the possibility of being a mother a bit more remote. 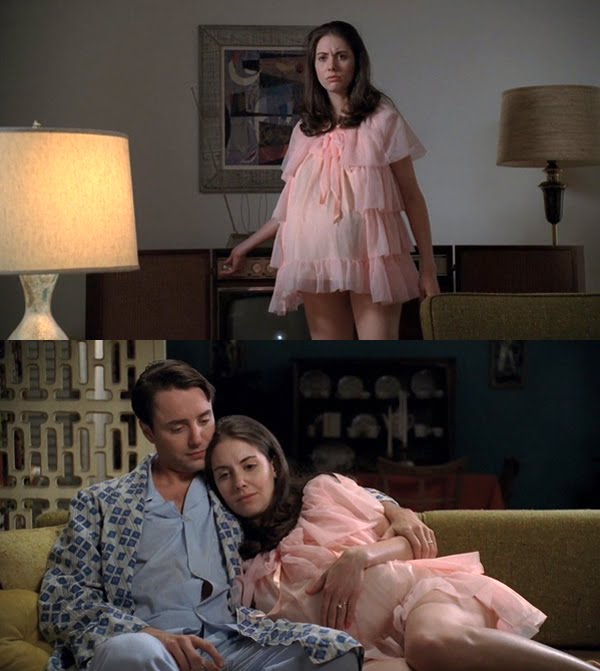 And speaking of maternity, here’s Trudy Campbell, awash in it. How very Trudy that no matter how big she gets, she will always find something cute and girly to wear. 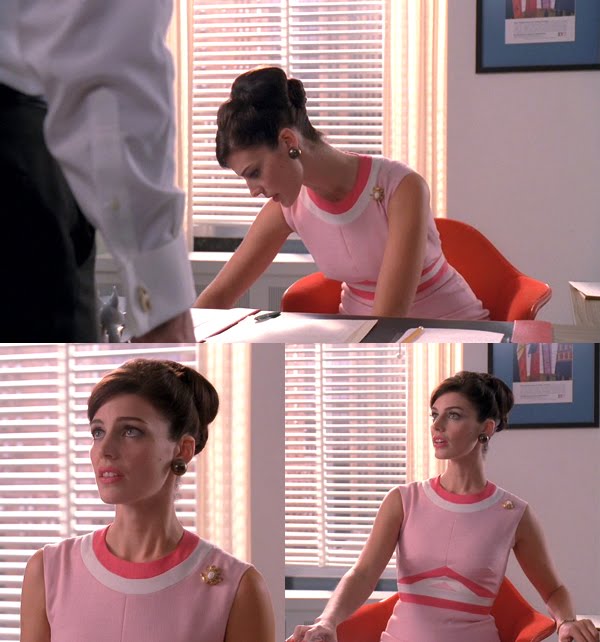 Megan’s always looked good, but her outfits, while brightly colored, weren’t as attention-getting as this one is. This is an absolutely fabulous little dress with some great mod graphic detailing. Maybe she wasn’t deliberately dressing for attention (it doesn’t seem like her) but this was the episode where Don suddenly noticed her. 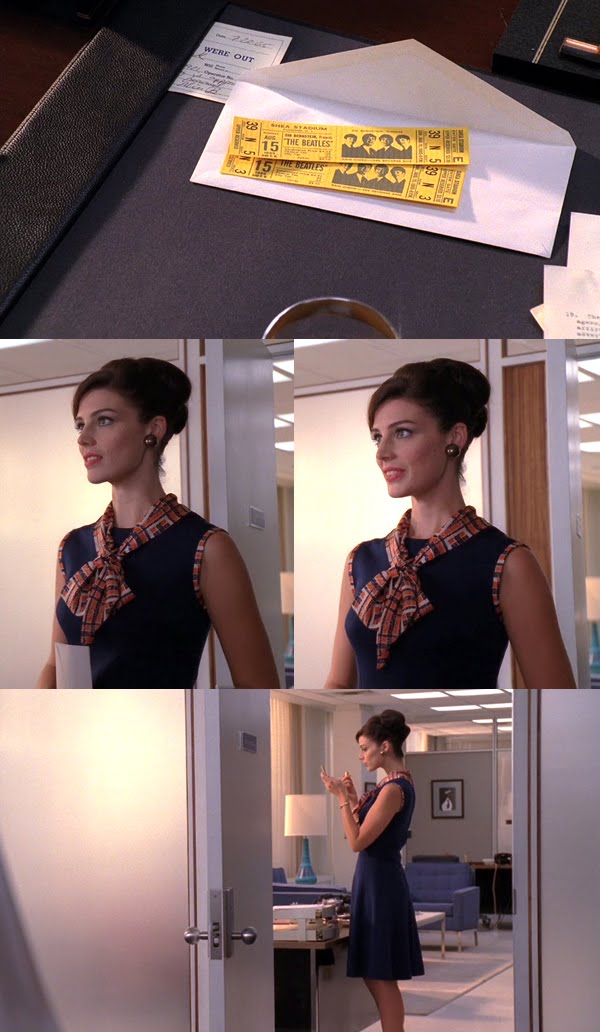 But this is the super-cute outfit that finally got his attention. She’s in blue, like a lot of the female characters this season when something important happens to them (e.g., Joan in the waiting room above). The plaid trim is new for her, since she never wears any sort of print. Again, it’s about making her more noticeable all of the sudden, both to Don and to the viewer. We don’t know if she really is going to be the next Draper paramour, but they’re certainly setting it up that way.