The walls of SCDP are crumbling down around its principal players and they’re all too busy and stressed to learn the lessons that are staring them right in the face. You can’t have a happy life if all you have is work. Trudy’s having the long-awaited Campbell baby and Pete not only can’t be there during her long labor, he didn’t even go to the hospital when he got the news she gave birth to a daughter. Roger dissolved his marriage, ignored Joan, and married a girl he probably shouldn’t have, all because he felt unloved and unworthy of his status in the office. Don ruined his marriage, left a trail of heartbroken, angry, or indifferent women behind him, and turned to alco 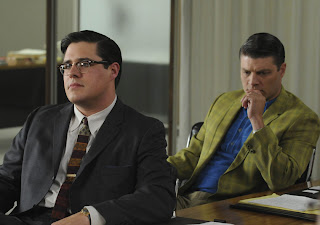 hol to deaden the pain. Joan, in the parlance of the day, “wasted the best years of her life” on an office affair and rushed into a marriage with someone she shouldn’t have (detecting a theme here?) only to find herself back doing the work she thought she’d escaped and back, if only momentarily, with the man who wouldn’t commit to her years before. Of the group, only Peggy seems to be heading in the right direction in both sides of her life, acing pitches at work and really enjoying the sexual side of herself, probably for the first time.

For Pete and Don, the big lesson to be learned was staring them in the face at their colleague’s funeral, as one eulogist turned to the widow and said with gratitiude, “You were there before he made partner and then you gave him to us.” We suppose that was meant to be a comforting thing to say but it sounded kind of monstrous to us. As the leaden-faced widow and her daughter sat there listening to tales of how their husband and father really did, no kidding, care for them, even if he never saw them, Don seemed to realize what was 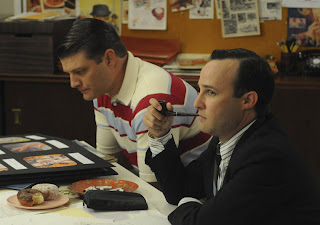 being said: Here lies a man that could be any of the men sitting there mourning him, obsessed with work and ambivalent about personal relationships. Don, typically, appears to have ignored the lesson.

As for Pete, it seems to have gone right over his head. Trudy’s finally in labor with the long-awaited Campbell baby and Pete’s off trying to save the company. He didn’t even go to the hospital when he found out she gave birth to a daughter. To be fair, he was dealing with a crisis that could mean the end of his current employment if he doesn’t find a way to fix it. His pushy father-in-law (seriously, Pete’s not always the most likable guy in the world, but there are times we wish he’d tell both Trudy’s parents to go fuck themselves) condescendingly dismissed the agency Pete’s been trying to build and pressured him into considering a job at CGC with the smarmy Ted Chaough, because he now has a family. It’s an argument that becomes a little ironic when Pete has to attend the funeral of a man who put career before family and was probably driven to an early grave because of it. 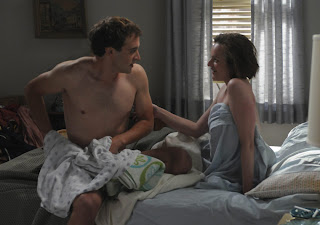 As usual, when the flaws and foibles of the “grownups” become almost unbearable to watch, it’s always Pete and Peggy we’re rooting for the most. When Ted Chaough ambushed Pete in the hospital waiting room and rattled off a list of his gets, we couldn’t help being impressed. Granted, he claimed he had help on some of them, but it’s really true what Lane told him several episodes back: he really has been bearing the burden of making SCDP work. Roger is useless, Bert is only good for the occasional moment of zen, and Don’s been a victim of his own demons for too long. Pete’s been the one hustling like crazy to get this thing up and running. No wonder he was so offended at the idea of bringing Ken in.

But here’s the thing about that: Why would Pete allow Don to berate him in front of partners and colleagues for losing the Glo-Coat account when just a few weeks before he had to jettison the American Aviation account solely because of those aforementioned personal demons of Don’s? Why not take that moment to call Don on his massive bluff? Then again, Pete can get very petulant and he may not have even thought of bringing it up. He hates when Don doesn’t respect him and it crushes him to the point that he can’t really think of a way to defend himself or fight back. “Who the hell do you think you’re talking to” seems to be the best he can muster when faced with Don’s disapproval. A shame, because we would have loved it if he stood up in the conference room and asked Don “Do you really want to go there, knowing what I know?” 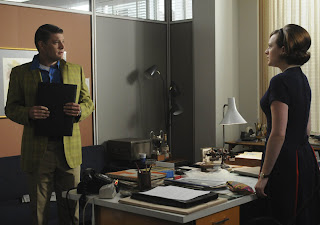 As for Don, he may not be in that hole of misery that he was earlier in 1965 but he’s still a Class A dickhead. Not just for taking out his frustrations on Pete (the way he takes his frustrations out on everybody in his line of sight), but for proving once and for all that after everything he’s been through, he hasn’t learned a thing and he hasn’t changed a thing about himself. By the end of the episode, he found himself once again in the arms of a loving and supportive blonde, having just cheated on her with his secretary.

Although to be fair, that little tryst was all Megan’s doing. She saw her opening and God bless that French-extracted little Jezebel, she went for it. She’s a mystery, that one. On the one hand, she’s nervous and bubbly, revealing that she pretty much thinks of Don all day and all night, but she’s also supportive and empathetic, something she demonstrated pre-sex by rescuing Don’s Clio from the trash and trying to offer some comfort (“I hope you’re not afraid, because you will get through this.”), and something she demonstrated post-sex by pretty much ordering him to go home and take care of himself. “I don’t want you drinking any more tonight.”

On the other hand, she seems to be quite calculating. “You judge people on their work. I’m the same way. Everything else is sentimental.” Or even better (and more direct): “Let’s be clear. I’m not going to run out of here crying tomorrow. I just want you right now.” Was that a bitchy little dig at Allison? That little Canadian hussy! We still love her, though. SCDP needs some fabulous and Joan is, sadly 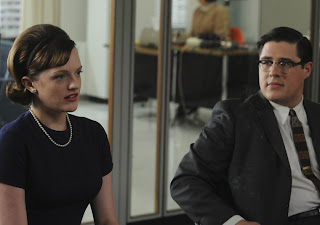 , too caught up in her own shit to provide it.

Said “shit” being none other than Roger Sterling himself. We said earlier in the season that it seemed like Roger was her only chance at happiness and she should probably just go for it. Well, thank goodness Joan doesn’t take our advice because in the end, Roger revealed himself to be exactly what Lane said he was: a child. A child who’s a damn good liar, it has to be said. As ridiculous as that fake phone call was, we were impressed that he was able to pull it off. We were convinced that either Don or Bert was going to take him aside and mention that they noticed his thumb on the receiver. But a liar, even a good one, is still a liar. By the time the deception got to the point of him hiding in an uptown hotel room, he looked pretty damn pathetic.

But not as pathetic as he looked when Joan finally dumped his ass. All he needed to do was say “I love you” to her (because he does) and she would have been there for him, but like a child, he was only concerned with his own gratification. Joan’s just a tool to use to make him feel better about himself. “I’m not the solution to your problems,” she wisely told him, “I’m another problem.” Honestly, that scene was heartbreaking; two people who care deeply about each other, hurting each other. Sad to watch. Still, we were happy to see Joan act like a grownup. Roger is just too weak for her and she’s too strong for him. 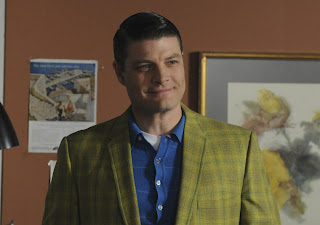 It’s a shame Peggy and Joan aren’t closer, because being a strong woman surrounded by weak men is something both of them have experience with. Fortunately for Peggy, she really seems to have found someone in Abe. “I’m learning,” he tells her. And is there anything more endearing coming from someone you like who disappointed you? He’s cute, he’s ready to accept Peggy on her own terms, AND he’s hot for her. Score!

Of course she has to bring some Catholic guilt into play lest she enjoy herself too much. “I’m not normally like this,” she coos as she comes back for seconds. That could have been the mantra for good Catholic girls gone bad for several generations; probably centuries. Later, she lets a little more guilt slip out when she hears the news about Lucky Strike. “Every time something good happens, something bad happens. I knew I’d pay for it.” As if God punished her for enjoying sex by magically getting the American Tobacco board to decide to consolidate their brands.

Still, we like this new sexually content Peggy. She aced a pitch based entirely on the new sensuality she was feeling, a trick she learned from the master himself. Don always used his personal life in his pitches and now Peggy’s doing the same, to great success. Not only that, but she did it with lipstick all over her teeth. Even that didn’t seem to bother her. Sure, Stan’s an asshole and that was as clear an example of sexual harrassment as you’re likely to see, but she’s too happy, both professionally and personally (unlike every single person around her) to let it bother her.

And then there’s poor Faye. We say “poor Faye” because, despite her tough New York Jewish girl exterior and her take no shit attitude, she’s still another of Don’s victimized women, even if she doesn’t realize it yet. Although we think there’s a big part of her that understands what just happened with them. Don tried to use her to get ahead and she compromised her principles 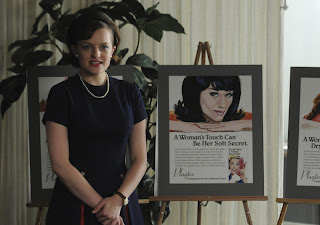 in order to make him happy. If that wasn’t bad enough, he cheated on her. Oh Faye. We like you better when you’re cutting off Don’s balls by seeing right through his bullshit. “I would do it for you,” he said, when he asked her to compromise her ethical standards (and we don’t believe he would for a second), which she immediately countered with, “I would never ask. I would never use you like that.” Faye, how is it you can see right through him and yet still fall for his bullshit?