Cover your Selectrics and meet us in the conference room, girls! Bring your cigarettes! 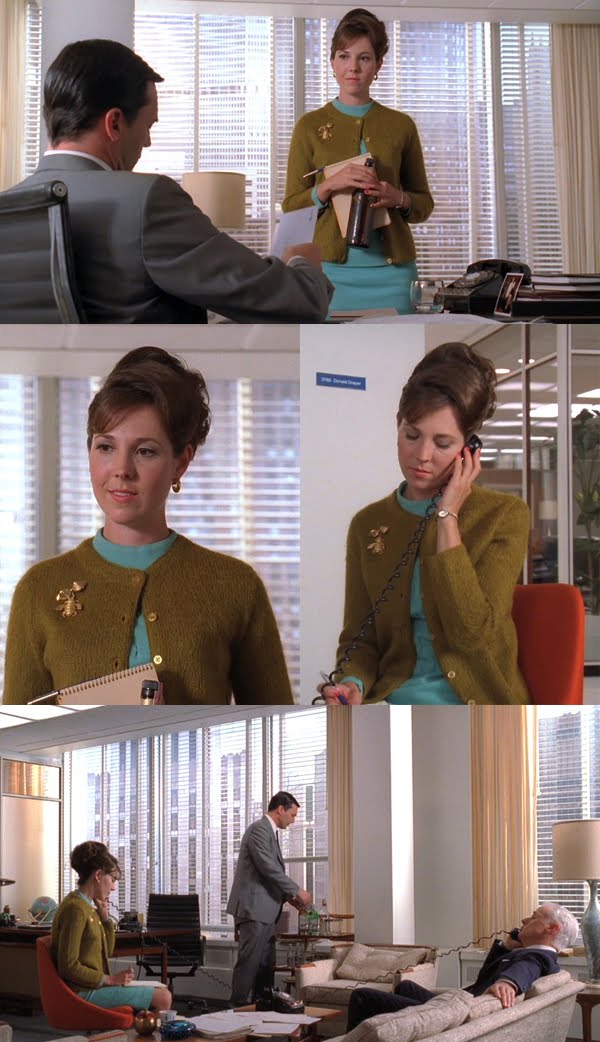 Her Christmas party dress was in blue and green and we asked back then, what is it about the ’60s that made blue and green work so well together? And in a range of shades? We think it must have had to do with a general explosion of color, which all started right around the time this season is set. And when we say “general,” we mean across the board, homes, clothing, cars, advertising, television shows – they all exploded with color right around 1965. Not that the world was colorless prior to this, but there were technological changes that allowed for the representation of color and there were social changes that allowed for some experimentation with it. The combination of the two produced the sixties as we know them.

Anyway, this is a longwinded way of saying we LOVE these two colors together on her. It’s like blue and green was just starting to be her “thing” and then she left. Dammit. 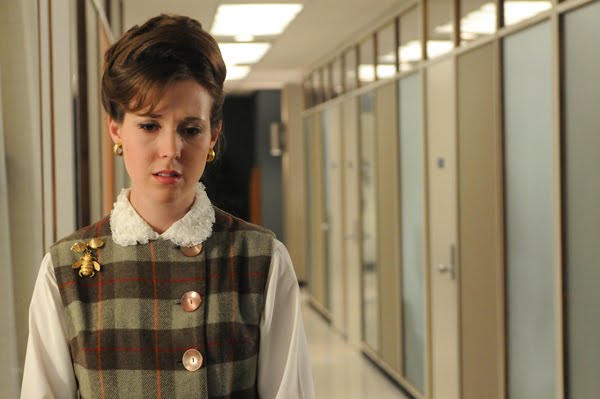 You give it to him, girl. It’s about damn time someone threw something at that black hole of a man.

Nothing much to say about this outfit (we promise not to bring “technological advances” up again); just another example of the good girl style clothes she’s wearing. She definitely favors the plaids and the frilly up around the neck. That’s quite the bee broach she’s sporting but we’re not inclined to give it too literal a meaning (She really “stung” Don!). Although it’s notable that she wore it in the previous scene as well. Favorite broach or subtle message? You make the call. 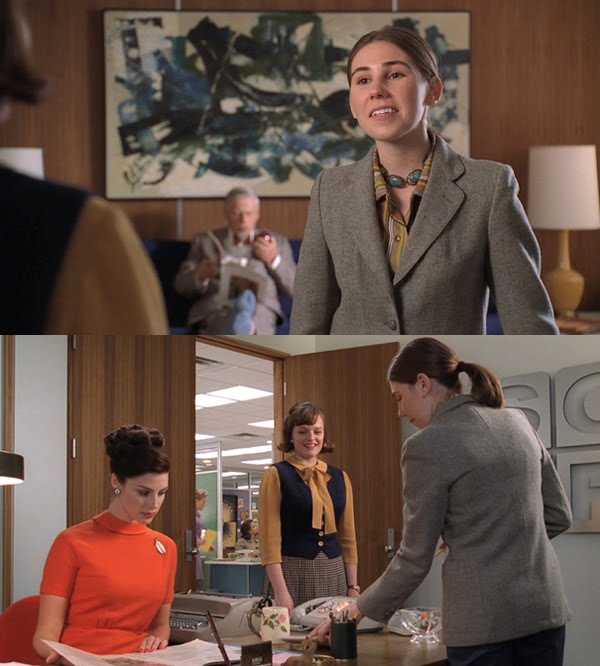 We went back and forth on whether or not Joyce’s look is period-appropriate. There is a tendency to really have one’s antennae up for any sort of anachronism so as to be among the first to pounce on it and we’re just as guilty of that sometimes. Too often, for those of us old enough to remember the period prior to, say, 1975 with any clarity (and we’re just barely old enough for that, thank you very much), there is also a tendency to center their anachronistic criticisms around their own memories and experiences. Which is, we guess, a way of saying that no, the girls in your high school/college/secretarial pool might not have been wearing their hair like this in February of ’65, but it’s fair to say that Joyce isn’t a typical girl of the period. She’s not even a typical out lesbian of the period. She’s got a pretty kickass and glamorous job as an assistant photo editor at Life and she clearly hangs with a crowd of … well, we’ll get to that in a bit. The point is, her flat, straight, middle-parted hair is pretty cutting edge for 1965, but that would make sense for this character, who is herself pretty cutting edge for 1965.

It’s also worth noting that she’s wearing men’s style clothing: pants, a shirt and a jacket. In 2010, this is a cute outfit. In 1965, it’s quite bold. So bold, that one could fairly say that the likelihood of a woman who dressed like this also being a lesbian was fairly high. Thank your lesbian aunts for Casual Fridays, ladies. Also, check the big, chunky, natural necklace; another element that would cause her to turn heads. She looks all J. Crew to us in 2010, but she looks pretty radical for a business setting in 1965. 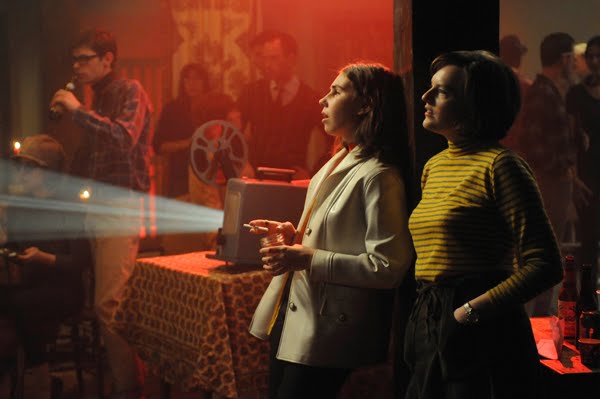 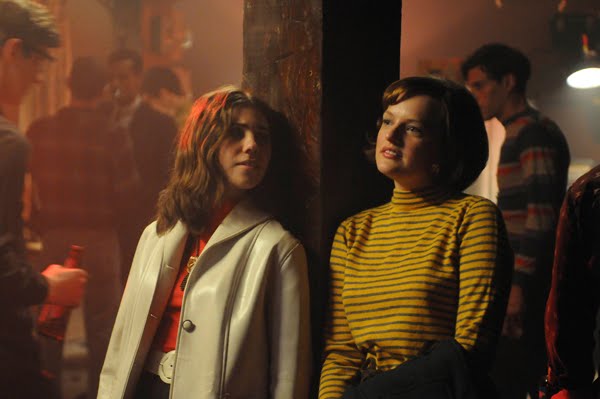 About Joyce’s crowd. We’ve seen them referred to as beatniks and as pre-hippies and both terms are wrong. The beatniks were over at this point, or dying anyway. The hippies are years off and thousands of miles from here. This is downtown New York in 1965. These aren’t hippies or beatniks. These are artists. The art scene in downtown New York in the sixties was legendary and unlike hippies and beatniks, a lot more diverse. It spawned entire social scenes, altered the landscape of New York city, became the playground of film makers and socialites and was just an all around cool-as-shit place to be. Peggy sure does know how to zero in on the most interesting people, doesn’t she?

As for our Pegs, she’s stepping out a bit herself, in a horizontal stripe. Earlier in the episode Harry was talking about a girl on the subway wearing a Jean Seberg-style striped top and here’s Peggy trying out her own version. This is quite chic. Not cutting edge, but pretty stylish. For Peggy, this is a good choice for this crowd. She’s not quite ready to be wearing Joyce’s (FABULOUS, we have to say) white leather jacket, but she’ll put on the trendiest thing she owns. That it’s paired with a cute skirt and matching purse is pure Peggy. “You look swellegant!” Joyce says. And that yellow-gold really is turning out to be her “power color.”

FINALLY we get to see a glamorous mid-sixties black girl look. Too bad she had such a short scene. More, please. Because we can’t get enough of that Dionne Warwick kinda mid-sixties fab, all teased hair and blue eyeshadow and dangling earrings.

Oh, Peggy. Honey, no. It’s kind of endearing that Peggy is still so uneven with her wardrobe. This is all out of her playbook: vest, blouse, pleated skirt. But it’s so unflattering here. The hair is definitely not helping. Still, it’s not out of style. It’s just that Peggy’s not Joan or Betty. She doesn’t look flawless EVERY time you see her. It’s part of the reason we all root for her, right? 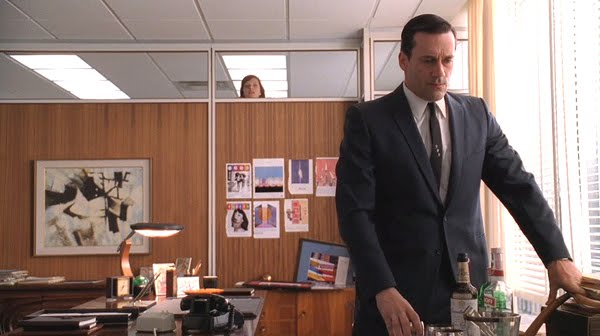 Couldn’t not include this classic shot.

See? Here she’s a lot cuter and pulled together. It’s like separates confuse and frustrate her. It’s notable that she’s in such a relatively girly outfit here and it’s a scene that calls back to her secret maternity. 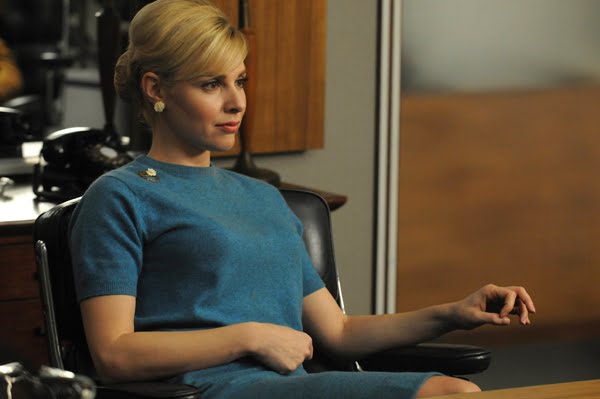 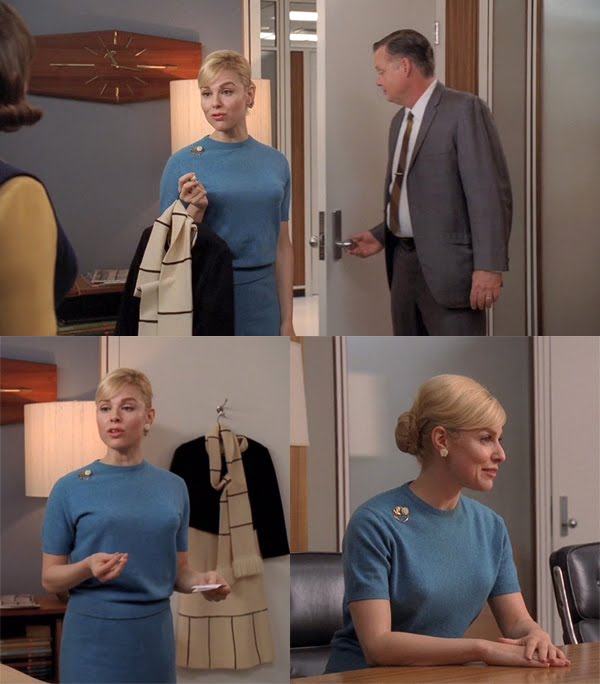 Cold as ice. To be honest, there’s a part of us that thinks she might be perfect for Don. He tends to marry the ice cold blondes, after all. And this time, she wouldn’t be so needy because she appears to be as detached from real emotions as he is. Still, she’s got that diamond ring, though. Not that that’s ever stopped anyone on this show.

Anyway, here she is in standard secretarial wear. The change is just subtle enough that the real secretaries in the scene, who all presumably know who she is because she’s been hanging around the office for months, don’t think it’s odd that she changed her clothes. She’s appropriately dressed for the office, after all. She’s just not in a suit like she normally is. 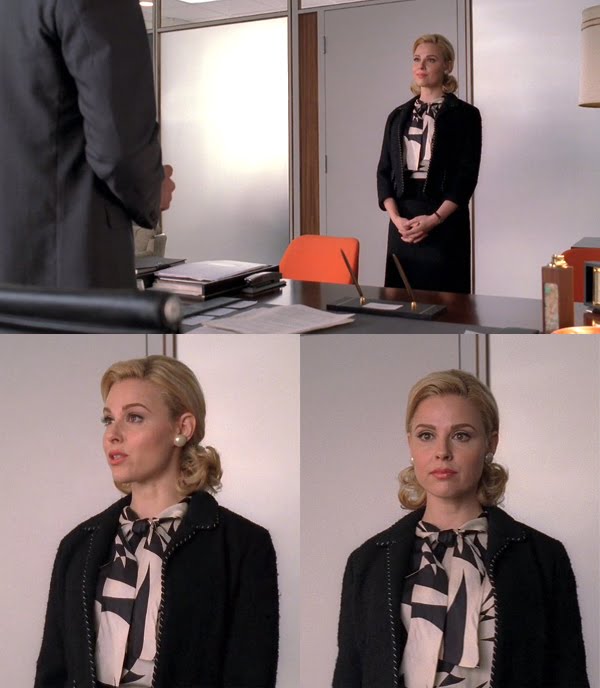 Like so. It’s notable that she’s squaring off against Don again and she’s doing it in black again. And an even more business-like black than last time. 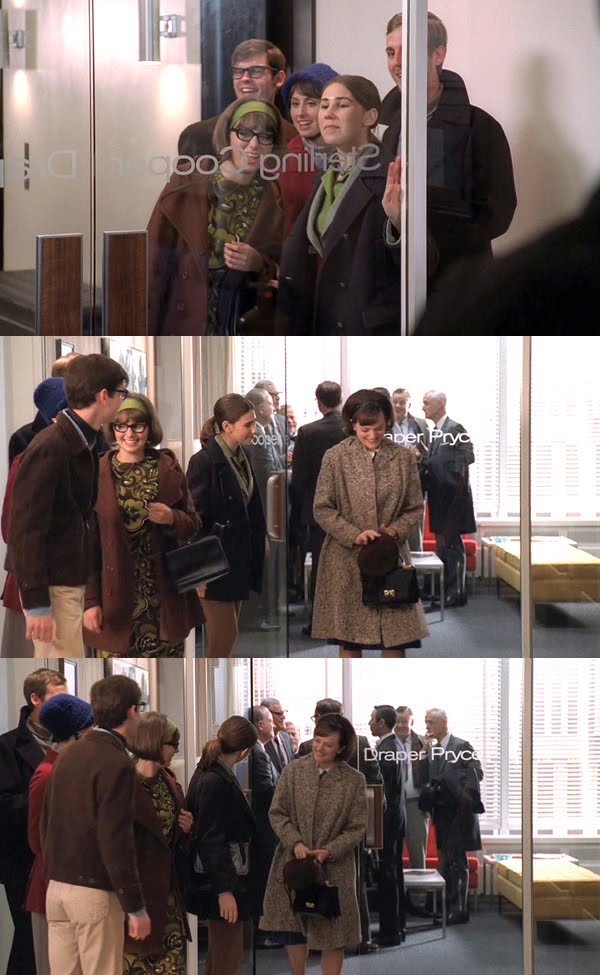 How adorable are Joyce and her hipster friends? With their peacoats and heavy-framed glasses, headbands and wool caps. They all look like background dancers on Hullabaloo. 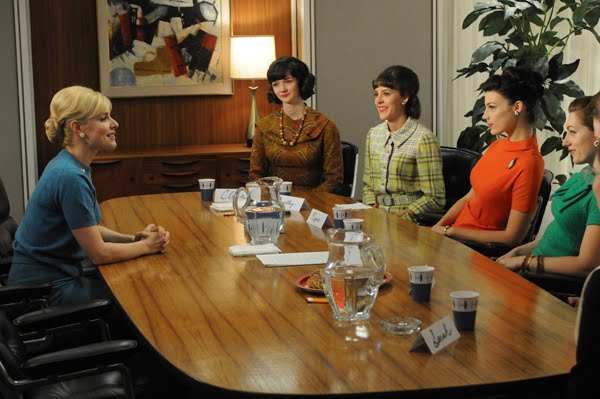 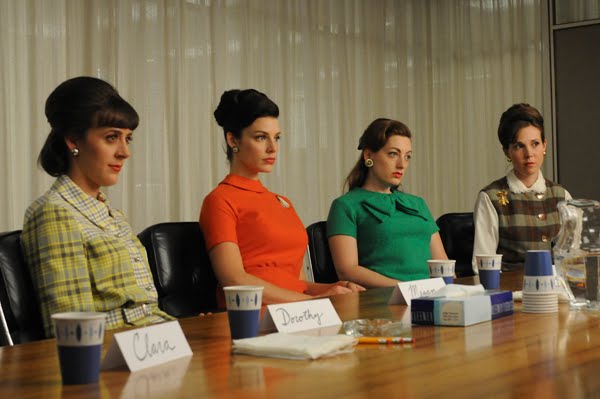 The latest in 1965 secretarial wear. Note how Faye’s outfit is almost perfectly mimicked by the two women (MEGAN!) sitting directly across from her. She fits in. Dottie’s plaid-on-plaid ensemble is making our eyes hurt. We love the gold paisley number with the big collar. 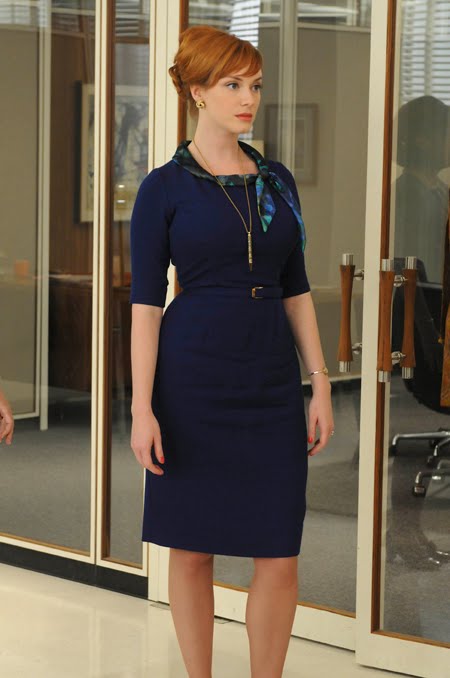 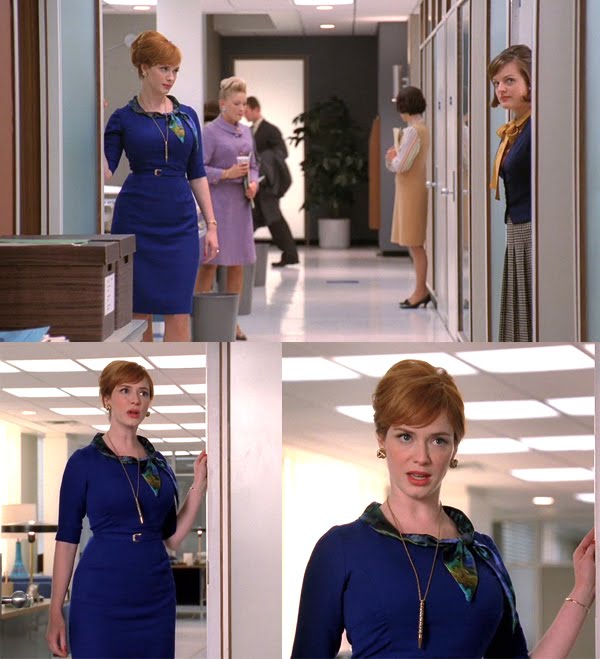 She didn’t have much to do this episode but as always, she cut quite a figure. You tell us: is she annoyed to be cast in the “old married lady” role? She seemed pretty cold about the whole focus group thing. She acted like it was because they took over her office, but we’re thinking part of it was because she hated being left out of something she used to be deeply involved in.

What’s notable here is that this is classic Joan. It’s new, but it could have been worn at any time over the previous 3 seasons. She just doesn’t change it up that much. We joked about Joan in a min-skirt last week, but honestly, it doesn’t seem like her at all. We can’t even picture her in an A line skirt, let alone a mini.

We’re glad to see Janie Bryant hasn’t strayed from her philosophy that these are real people with real wardrobes. There are plenty of real people like Joan, who settle on the best look for them and rarely change it. Very few people dress in trendy clothes all the time. At the beginning of the season, everything looked so New! and 1964/5! that we feared they’d gotten away from that real-clothes feeling.

A perfect example: Trudy’s come a long way in 5 years, as has Pete, but she’s still wearing a shirtwaist dress that matches her apartment. It actually took us out of the scene for a second because it seemed like such a throwback to earlier, angrier scenes in their marriage. Then we realized, those earlier angrier scenes where she wore shirtwaist dresses that matched her furniture? Those were scenes where they were arguing about their fertility issues. A perfect callback.

And speaking of perfect, how perfectly Trudy is that first shot of her? In fact, we want a spinoff when Mad Men ends: Perfectly Trudy.