Unsurprisingly, if you’re doing a series of posts on the fashion of Mad Men and you want to work your way up to the inevitable Joan and Betty posts, the beginning of the series might as well be called “Don’s Mistresses,” because after examining Bobbie Barrett’s sartorial choices, we’ve got two posts lined up looking at the frocks of Rachel Menken, played by Maggie Siff in Season 1 (with a memorable cameo in S2).

Rachel was probably the most moral character ever to appear in the world of Mad Men. She had a depth that very few of Don’s women ever had. A daughter who was supposed to be a son, she is a Jew and an intelligent woman in a world where both would be considered detriments to success and acceptance. A department store heiress, she’s educated and wealthy and has taste, but she knows money isn’t something to be taken for granted. Her father worked himself to the bone to give her the status she has now and she’s well aware of it. Compare her to Betty, who expects the finer things in life because she’s always had them and was raised to believe she deserved them.

She’s also ambitious and serious, and worldly, which made her the woman Don wanted to literally run away with, until she realized that he was the kind of man who ran away and recoiled in horror, asking, “What kind of a man are you?”

In short, she was just the kick in the nuts Don needed and deserved and he clearly never got completely over her.

Here’s our introduction to Rachel as she meets with Don and Roger in the Sterling Cooper offices. Much was made leading up to this scene about how there were no Jews working at SC and how they needed to get a Jewish employee somewhere to sit in. Before you’ve even met her, she’s been cast as The Other. When it was revealed to Don’s surprise that she was a woman, the Otherness was compounded. She’s wry and sarcastic and like so many of the women Don goes after, she doesn’t take a lot of shit. The meeting ends very badly, with Don going so far as to declare that he’s not going to let a woman talk to him like this, although it’s crystal-clear that they both have the hots for each other, even if the mutual respect hasn’t quite followed.

We don’t need to recap every scene for every outfit, but this is important to what she’s wearing. This is probably the least attractive she’s ever looked on the show and we think that was deliberate. Had she been a bombshell in the Joan or Bobbie mold, the scene would have read differently. She’s in a somewhat severe suit and her hair isn’t all that flattering. The colors are a deep purple with black accents. It’s all very serious and she’s a serious woman. There’s nothing overtly sexy about the look. She’s here for business and well aware of what everyone thinks of her. 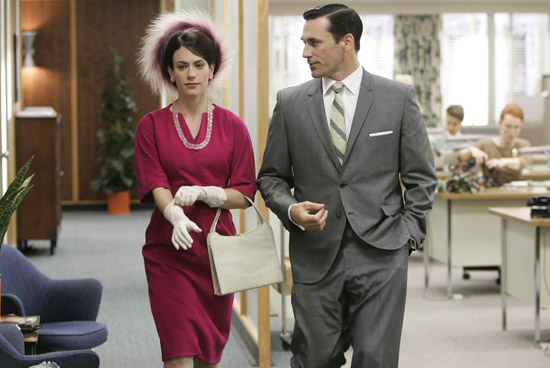 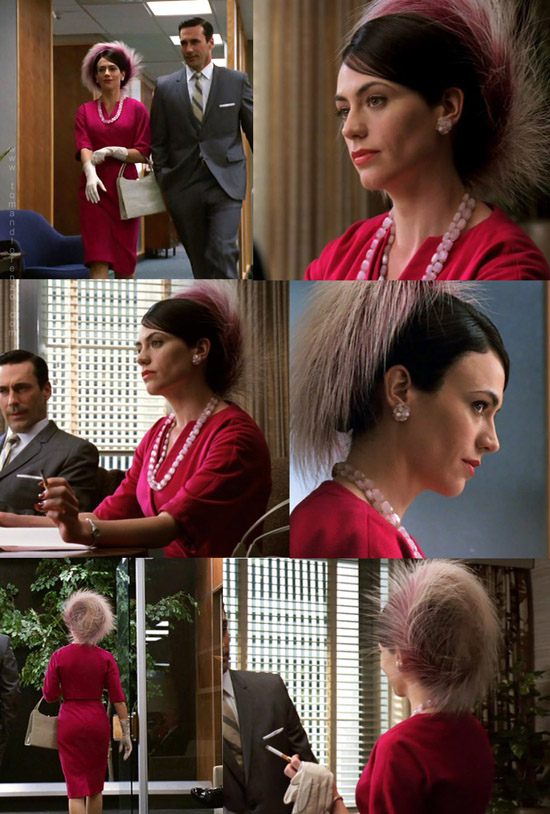 Meeting #2, Don’s attempt to make up with her. She hid it well in the first meeting but she must have seriously gotten the hots for him. Why else did she so suddenly go from serious business woman in serious tones to walking sex? Oh sure, it’s a classy outfit because she’s a classy gal, but suddenly it’s pinker, she’s got an exuberant and somewhat frivolous hat (which is FAB), and the black accessories have been switched out for white. It’s still a stark and eye-catching look (which is how she rolls), but it’s way more overtly feminine with more touches to it. She wants Don to think of her a certain way. First, it was as a client, but now the message is a little less clear.

Also, look at the fit here. Joan, Betty, even Peggy occasionally all wear dresses that are very form-fitting, as was the custom. Rachel’s clothes are always impeccably tailored and of the highest quality, but they’re never tight in the way so many other women on the show dress. She’s a desirable woman, but she’s got a lot more going on than her body. 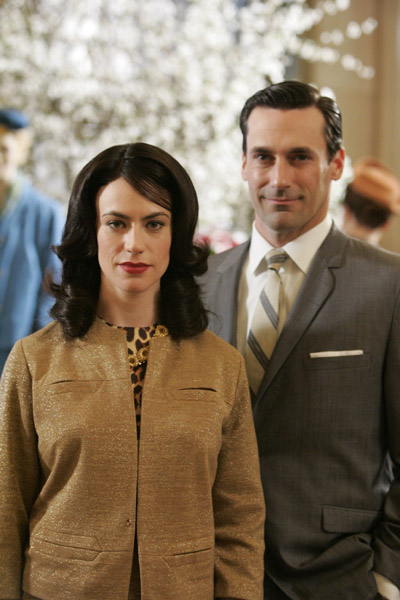 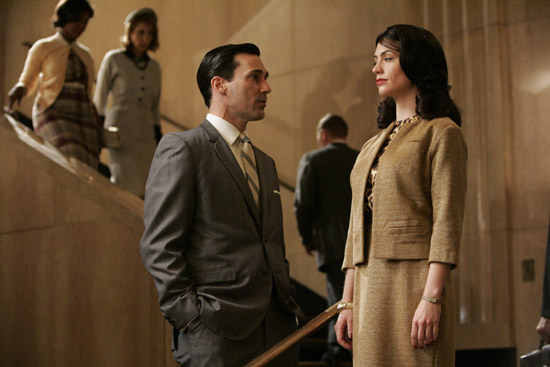 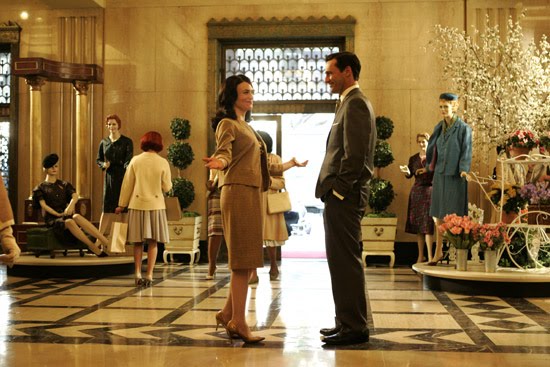 She takes Don on a tour of her department store. Again, it’s a low-key chicness that speaks of not just her money, but her sophistication. She doesn’t go for Bobbie Barrett-level showiness but you can still tell her clothes are top of the line.

This is almost drab in comparison to other looks. It’s workman-like because, well, she’s at work; no hats, gloves or purse, very toned-down jewelry. The hint of an animal print – which was way more daring in 1960 than it is today – tells you a little bit about how much she’s attracted to him. And the hair and makeup are noticeably softer because this is the scene where she softened her adversarial feelings about Don, only to find out that he’s married. 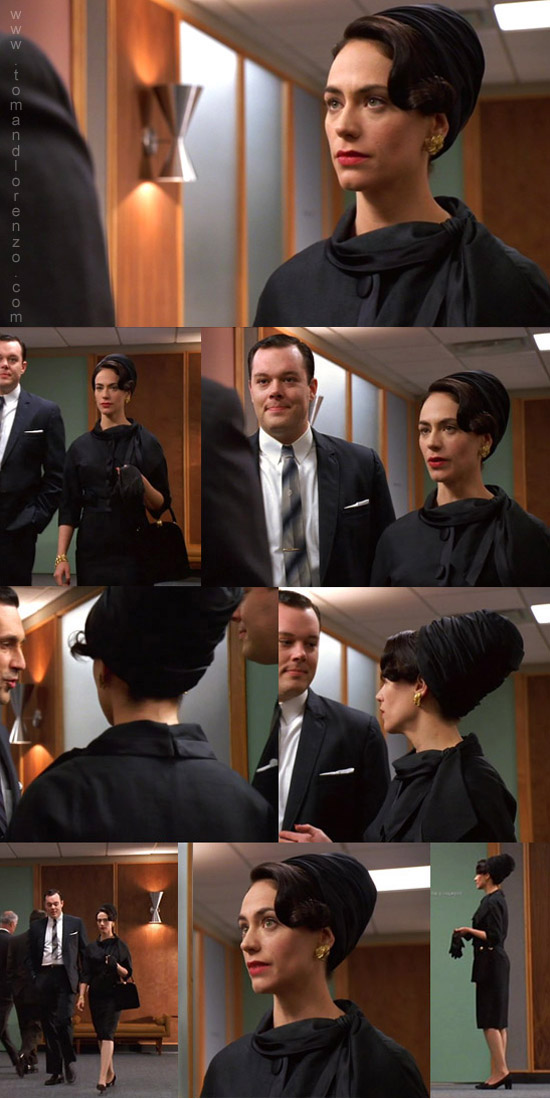 Her heart’s been broken because she put herself out there for Don only to find out he’s married. Paul Kinsey takes over handling her account, but she runs into Don in the SC hallways, visibly pained to see him.

No need for subtlety here. This is a mourning outfit. A stylish and fabulous one, no doubt, but nonetheless a clear indication that she’s in pain over Don. We’re back to more severe hair and makeup. She’s toned down the accessories considerably, because after all, diamonds would be crass on a widow.

That turban-style hat is to die for. 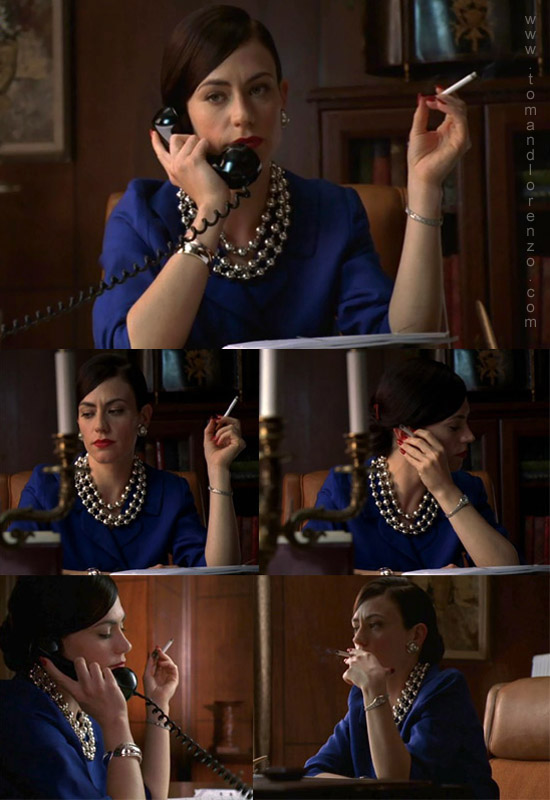 Don, under the pretense of wanting to pick her brain regarding how to land the Israeli Tourist Board as an account, calls her up and asks her for drinks, which she accepts, with some trepidation.

We’re just gonna say it: she looks – and we don’t mean this in a bad way at all – every inch the wealthy Manhattan Jewish woman of a certain period here. Given the topic of conversation (“You’re a Jew. Do you mind if I ask you about Jews?”) her Other-ness needed to be accentuated again. At this stage in the show, the only female characters have been Betty, Peggy, Joan, and Midge, Don’s Boho Greenwich Village mistress. Compare how Rachel is presented: Her colors are richer, her jewelry is bigger, bordering on flashy, her hair is lacquered and very close to her head, a style that would have read more “European” and “sophisticated,” in the way those buzzwords are sometimes used as euphemisms for “Jewish.”

We’re not saying there’s anything stereotypical about the look, just that the work was put in to make her look different from the rest of the women in the cast. Her Jewishness was an early plot point and her entire style often reads as “wealthy, educated, ambitious Manhattan woman,” of which at the time, many would have been Jewish. The ornate, menorah-like desk lamp and dark, old world-style paneling only complete the picture.