Let’s do it Glee-style, bitches. Rapid-fire with no concern for form or structure or rationality. Here’s what happened. Rachel became more obnoxious, pushing her even closer to becoming too obnoxious for any viewer to care about her. T 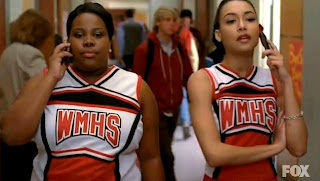 hen, she loses her voice, a development that can only be classified as “welcome.” Look, we love the girl and there’s no doubt she’s the star, but anytime the focus gets taken off her can only be good for the show because they have such a great ensemble cast.

Meanwhile, Kurt once again is the semi-closeted gay teen struggling like hell to be anything but what he knows he is and causing former closeted former teens to squirm in their seats remembering things they’re happier not remembering. Poor kid. Somehow he managed to make “Pink Houses” sound even more cynical than the original Mellencamp version. We can’t feel too bad for him because he got to realize the secret dreams of generations of gay boys by getting his turn to play Mama Rose, God bless him. 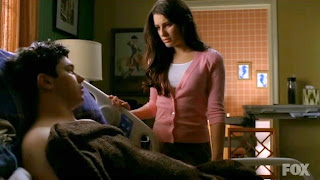 Also, Puck has his mohawk forcibly shaved off and loses his mojo. He decides to date Mercedes to get it back. No it doesn’t make a damn bit of sense given the world the show operates in but it seemed pretty obvious to us that they came up with the songs first and then built a story out of it. First, Puck is up with a cute, but not great version of “The Lady is a Tramp,” which only got really interesting when Mercedes joined in. It would have been a great solo opportunity for her.

But we can’t shed too many tears over missed opportunities because we got treated to a freaking fabulous version of “The Boy is Mine” with the unlikely duo of Mercedes and Santana who were AWESOME together. “Enjoy it while you can, Weezy.”

Later, the show makes us even more uncomfortable as yet again, a disabled person is used to teach an Important Lesson to the so-called “able-bodied” person. At least with Artie’s story it was actually about a main character, but with the deaf kids, the developmentally disabled characters, 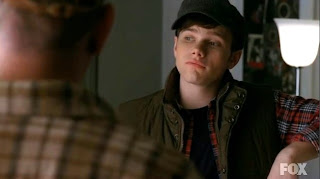 and now the paralyzed kid, it’s veering into cheap plot device territory, and worse, Afterschool Special territory. We’re not complaining about the frequency with which differently abled characters are depicted; we’re just a little uncomfortable with how often they’re used to teach a lesson, especially when you’ve got a quadriplegic teaching a lesson to a girl with tonsillitis. Really, Glee? You don’t think that might be just a mite heavy-handed?

Additionally, the closing scene of the entire choir onstage dressed like they work at the GAP and singing a song at least a decade old as Rachel and Finn dance-chase each other around is another Glee cliche that needs a rest for a while.

Ooh, we sound cranky. Well it’s true. We didn’t hate the episode, but we didn’t love it, either. They really need to shake things up. Here’s what we know because it’s been repeated ad nauseam: Rachel is obnoxious, Kurt is in pain over his identity struggles, Mercedes is obsessed with popularity. Okay now. We’ve seen these storylines enough. How about some Artie and Tina? Although it was nice to see Puck and Santana take a little more of the spotlight. Weird how Quinn is turning into this saintly, wise, moral voice of the group. Or maybe that’s just her with Mercedes. We have to say, we do love the way that totally unexpected relationship is shaking out. “I just don’t want to see you get hurt.” That’s sweet. And it’s nice to get confirmation that she’s living with Puck’s 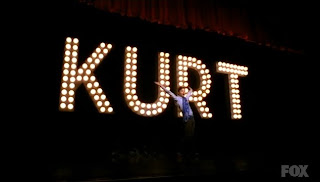 As for the numbers, we really only liked “The Boy is Mine,” in that head bopping way the show does at its best. We had to laugh at “Jesse’s Girl.” How did we not see that one coming? Having not really listened to the song in a good, oh…25 years or so, we were struck by one thing that never occurred to the 14-year-old versions of us who loved it and had the 45: “Geez, there’s uh… not much to this song, is there?” It was funny to see Kurt doing “Rose’s Turn” and he sold the hell out of it, but it’s not heading to our iPod any time soon and besides, we thought the lyric changes were a bit clunky. Still, we’d be remiss if we didn’t point out the fine work Chris Colfer is doing in his portrayal of Kurt. He’s heartbreaking and he’s hilarious. 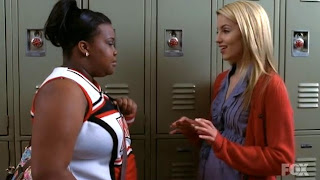 No matter how uneven the episode, though, you can always count on some laugh-out-loud one-liners:

“Get ready, black girl from glee club whose name I can’t remember right now, the Puckster is about to make you his.”

“BECAUSE THERE IS NEVER AN EXCUSE FOR STIRRUP PANTS!”

“So you like showtunes. It doesn’t mean you’re gay. It just means you’re awful.”

“I’m gonna make it a habit not to talk to students because this has been a colossal waste of time. ”

“At least start by taking these antibiotics. Unless you think they’re going to adversely affect your dance moves.” 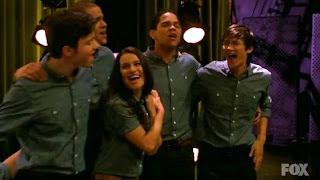 thought you were capital-G Gay, but now you’re not. Having a perfect record would mean a lot to me so let me know if you want to tap this.”

“I’m like Tinkerbell, Finn! I need applause to live!”

“I came home to find this note on the doorknob, ‘Do not enter under any circumstances, I am making out with a girl.’ I just thought it was the start of one of your murder mystery dinners.”

“Use protection.”
‘”Does he mean like a burglar alarm?”