It’s TIME, bitches!
We know we said we were going to work our way up to the trifecta of fashiony Mad Men goodness (otherwise known as Betty, Peggy, and Joan), and believe us, we still have plenty of lower-tier characters’ costumes to look at. In fact we kind of can’t wait to get to Peggy’s mother and sister. We suspect we’re going to hear a lot of “My mother wore that!” in the comments section. But we couldn’t help ourselves. We had to get at least one Joan post out of our systems. She’s like a big box of chocolates sitting there right in front of you. You can’t NOT indulge a little.Easily the breakout character of the show, Joan Holloway tops the list among many Mad Men fans as the number one reason to watch, whether for her pre-feminist self-sufficiency or her scorching hot image as she sashays past the screen reminding us that there was a time when walking in heels and a girdle was considered something of an art.More than most of the characters (with the possible exception of Betty) Joan’s image, how she presents herself, is central to who she is and central to why she is so beloved and discussed. Christina Hendricks almost single-handedly put curves back on the table in response to the gym-toned perfection that was the only standard in feminine beauty for a generation.

In addition to highlighting what they called sex appeal back then, Joan’s wardrobe also serves to make her look formidable. She is almost always dressed in solid colors, tone on tone, without a lot of contrast. A curvaceous column, topped off by an ever-higher bouffant as the sixties go on. When you see Joan Holloway walk past your field of vision, you see not only her curves, but also the understructure that supports and enhances them. You forget how visible foundation garments were back then and how that was just accepted. Joan is literally strapped into her armor and ready to face her day, never having anything but the upper hand in any situation.

Our introductory Joan scene. She is, of course, taking the new girl, Peggy Olson, around the office and showing her the ropes. She is rapid-fire, smart as a whip, and reveling in her big sister role, complete with sharp and cutting remarks to her new “kid sister.”

Talk about your study in contrasts. Right out of the gate, Joan is a dark column set against Peggy’s lighter tones and fussier silhouette. And yet their colors compliment each other. Look at that second to last shot and how it’s framed. They match their surroundings.

This is a signature Joan look. Tight, one-color, little sleeves, modest neckline and a brooch to set it off. Joan always has little touches, like a brooch or a scarf to complete her outfit. She even tells Peggy in this scene “Men love scarves,” and treats it like career advice.

Joan continues her big sister act with Peggy. She declares her packed-lunch “sad” and decides to take her out shopping. The boys in the office offer lunch, and they decide to go. Peggy gets treated like a piece of meat the whole time.

This is slightly unusual for Joan in that there’s a high contrast between top and skirt. Otherwise, it’s pure Joan: tight, sleeves, matched to within an inch of its life, topped off with a scarf-like detail at the neck, fabulously understated button earrings, and her signature pen-on-a-chain, bouncing over the Niagara of her boobs. Look at how massive her hair is. In many of her two-shots with Peggy, they are both framed so as to enhance their size differences. Joan literally looks huge next to tiny Peggy. Not in a bad way, just in such a way as to always subtly remind you of her superior position in the pecking order. She is at the very top (of her milieu) and Peggy is at the very bottom. 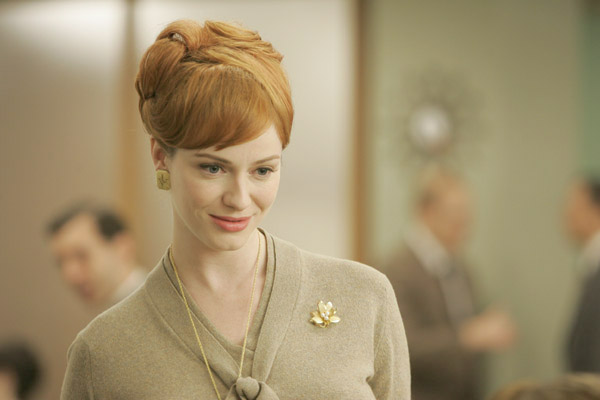 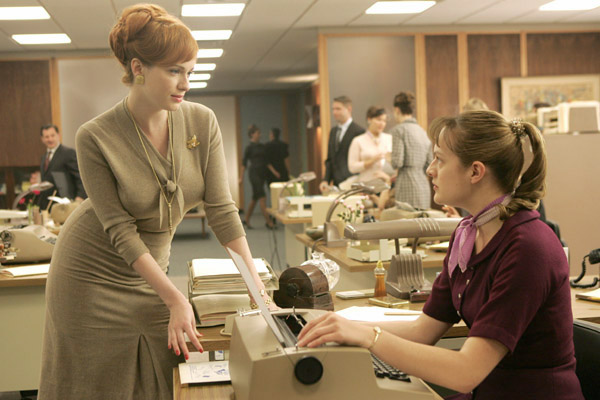 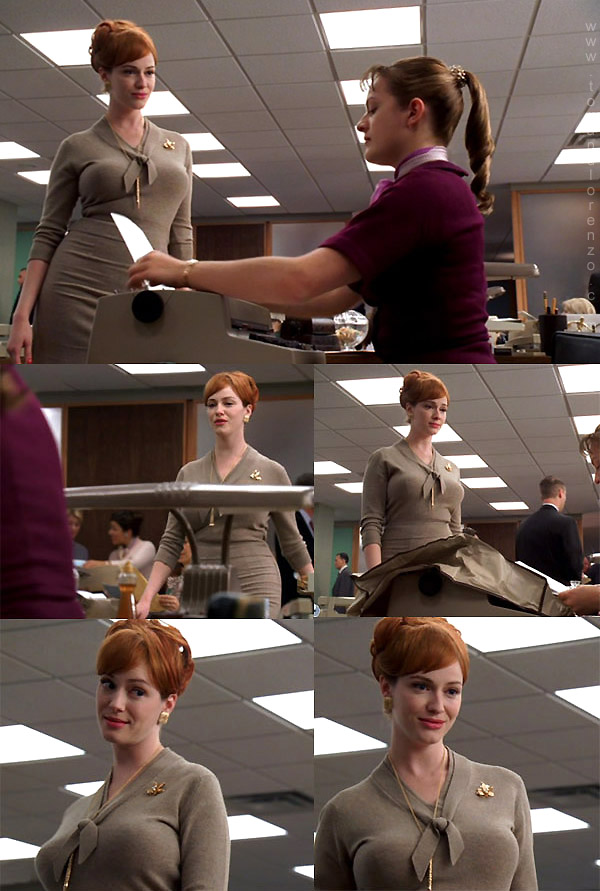 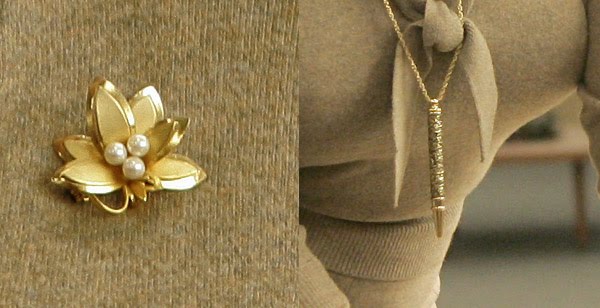 Later in the episode, Joan confronts Peggy over some sloppy typing and Peggy complains about being “the dessert” to an endless parade of horned out ad executives. Joan is amused and essentially says “Sack up, ho.” No, what she really says is “You’re the new girl and you’re not much, so you might as well enjoy it.” God bless that curvy bitch.

Joan is literally at one with the office, blending into desk, paneling, and even typewriter. Peggy is the discordant note here. She’s a slash of purple against a conformist beige backdrop.

Once again: scarf detail around the neck, form fitting, one color, brooch, pen, hair. Joan simply does not deviate. She’s found the look that works for her and who can argue with that? 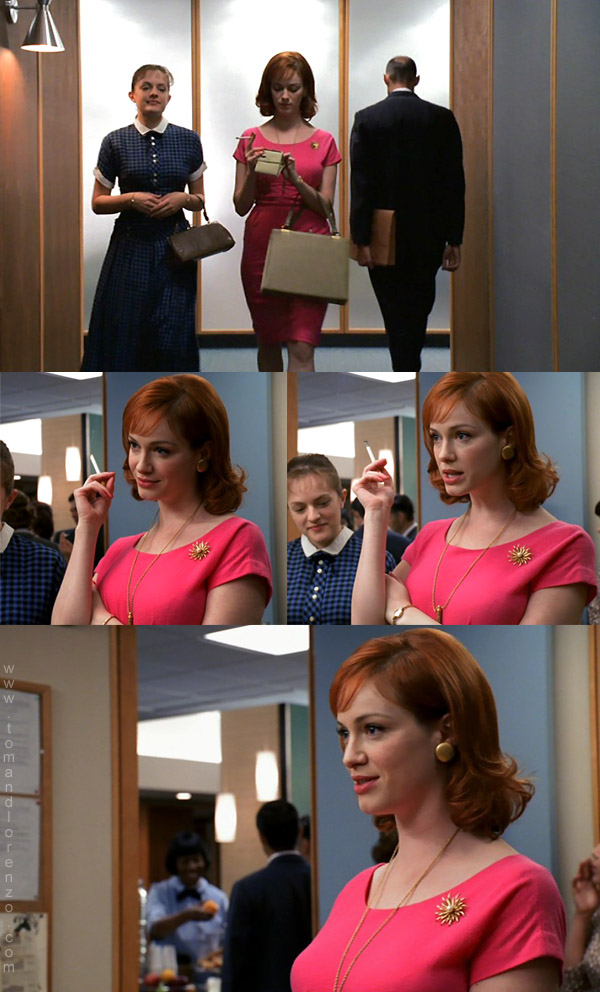 Joan and Peggy discuss “Lady Chatterley’s Lover” with some of the office gals. Joan doesn’t think Peggy would be interested in it. Peggy disagrees.

This is something of an anomaly for Joan. The Joan trademarks are all there, but the effect is a little off. Joan doesn’t wear her hair down in the office normally. And that pink is just a little too obvious for her. She tends to use rich colors, but the tones are more subtle. We’re chalking this one up to a first season misstep. 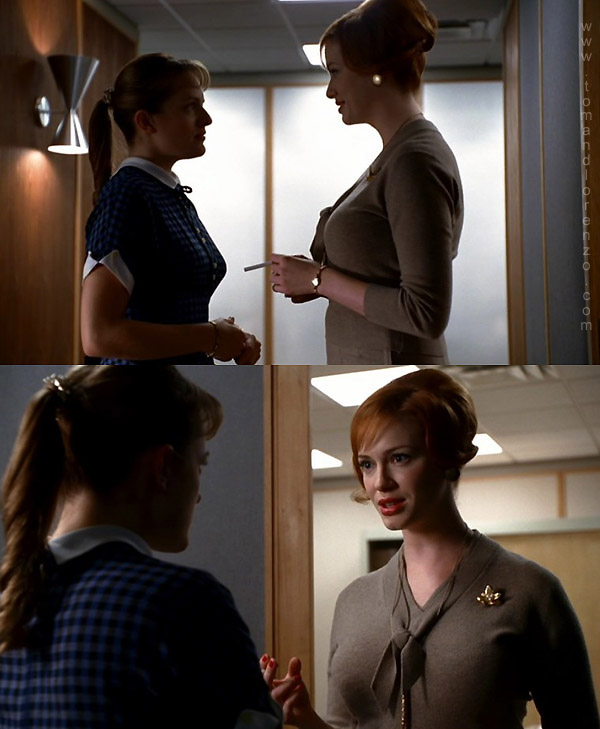 Don goes off to see his long-lost brother and Peggy mistakenly thinks he’s gone off to see Midge, of whom she’s just become aware. Betty shows up in the office because she has a family portrait scheduled and Peggy panics. She hunts down Joan, tells her about Midge (“You shouldn’t have told me that. I’m not going to tell anyone, but you shouldn’t have told anyone that.”) and begs her for advice on how to handle the situation. Joan lights a cigarette, blows some smoke at her in amusement, and tells her exactly what to do.We’ve seen this outfit already. We love the fact that characters like Joan and Peggy recycle their outfits quite often, just as women in their position would. They don’t have an endless wardrobe. They have the same limited number of garments that any working woman of the time did. Again, though. Joan is framed to look positively huge next to Peggy, towering over her as she gives her advice and teases her. 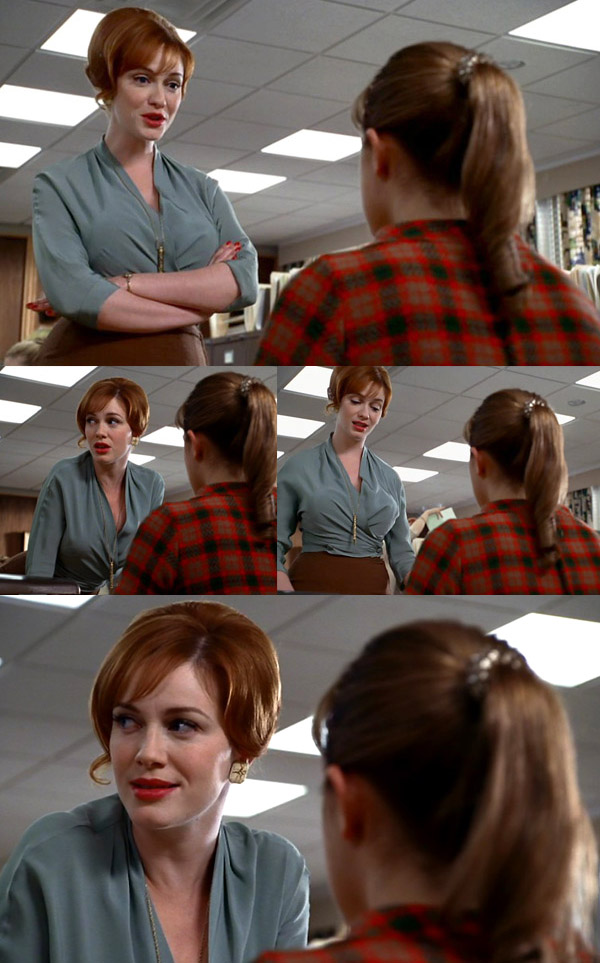 Later in the episode, Joan comes over to Peggy’s desk to reflect on why Don has never gone after her and to remind Peggy that keeping Don’s private life private is her job. Peggy is appalled at the idea.

Not much to say here. It’s a very toned down Joan. No scarves or brooches. The color is a little drab and she’s wearing a skirt that cuts her in half. We like to think it’s the end of the week and Joan had run out of clean outfits. Look how perky Peggy looks in comparison. Peggy is naive and wide-eyed in a perky little plaid and Joan looks a little tired and washed out.

Mona and Margaret avail themselves of Joan’s limitless knowledge and she books Margaret a hair appointment. Later, we are introduced to the fact that she and Roger are having an affair. He is all throw-caution-to-the-wind and she’s far more cautious and understanding of just what it is they’re doing.

Purple is an important color for Joan. Some very important things happen to her when she’s wearing this color. To us, it means it’s the color of Joan’s heart. When she is vulnerable or in a situation where her heart is exposed (like this one) she’s more often than not wearing purple. 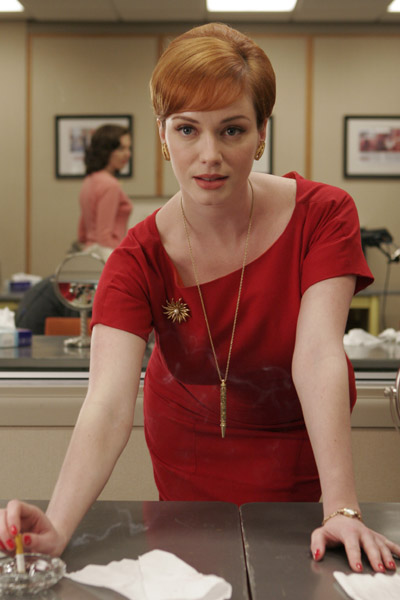 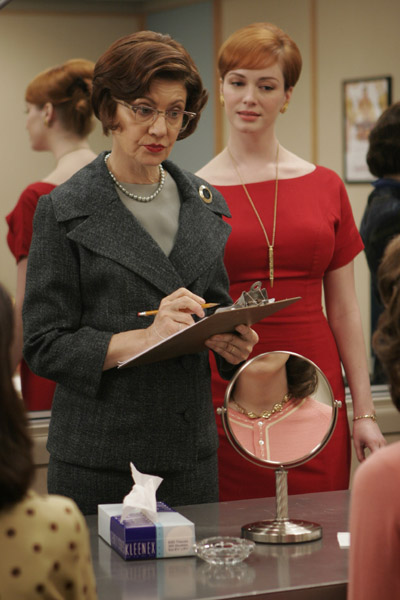 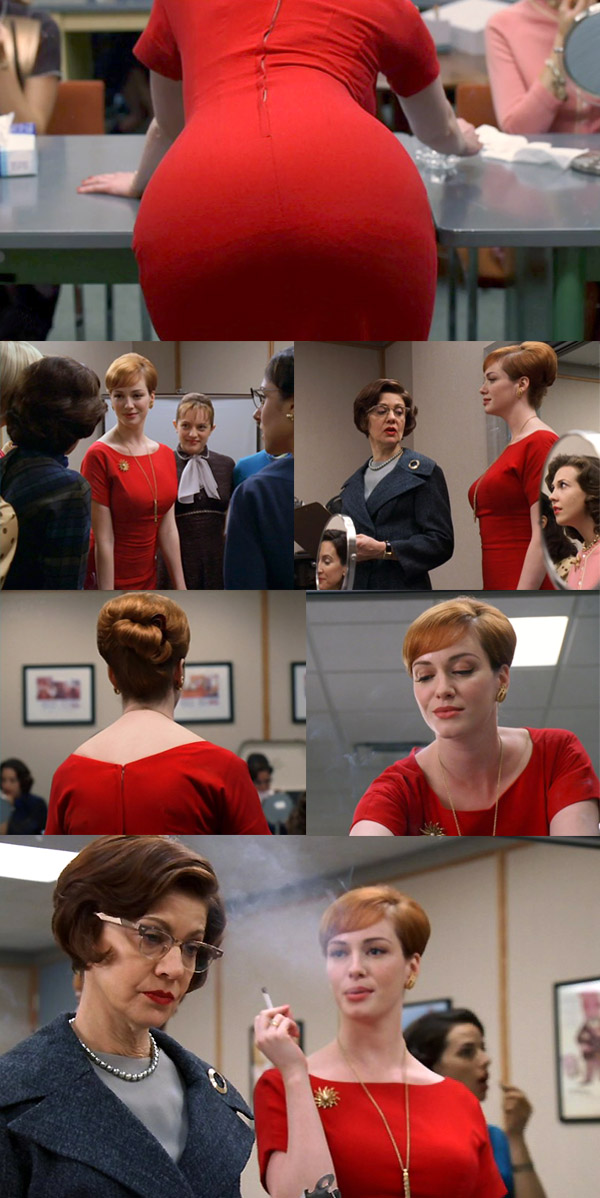 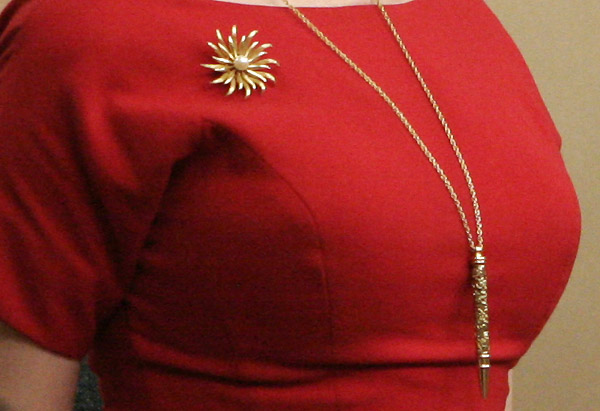 Joan organizes a product testing session with the girls in the office and a big box of Belle Jolie lipsticks. Aside from the bitchy German researcher (who gets a face full of Joan smoke) Joan is the only one in the room who knows they’re being watched through the mirror by a bunch of men. She puts on a show just for them, reveling both in the fact that she knows they’re watching and in the fact the she knows she can drive them crazy.

Okay, no. THIS is the quintessential Joan outfit. It’s interesting how her outfits are all fairly modest in terms of what they reveal and highlight. With Joan, it’s HOW she wears the outfits that make them so drop-dead sexy. She is professional to a fault, but she knows she can give a room full of men woodies by just leaning over and putting out a cigarette. THAT is what we call the art of “wearing the hell out of” something.