Home » Television » Out of the Wild: The Alaska Experiment

Out of the Wild: The Alaska Experiment 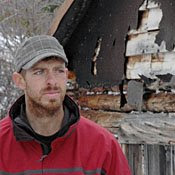 Darlings, we have documented time and again our reluctance to watch network television (except for Lost, of course) and we readily admit that the majority of cable television is a vast landscape of mind-numbingly stupid shows. But lately, we’ve come to the realization that we’re spending too much time at our computers and we’ve been trying to find something – anything – on TV to catch our interest.

A great way to try out new shows is to just scroll through the On-Demand menu and click on anything that sounds remotely interesting. Spend a couple of minutes viewing it. Don’t like it? Click to the n 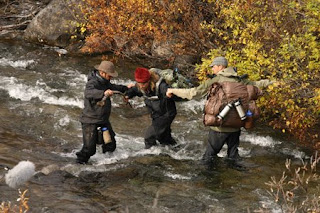 ext item on the menu. It’s much better than channel surfing because channel-surfing gives you one minute of show for every 5 minutes of commercials.

Anyway, a couple weeks back we were on the Discovery Channel menu and clicked on a show called Out of the Wild: The Alaska Experiment. And bitches? We were HOOKED within minutes. Have any of you seen this? They drop 9 people off in the heart of the Alaska wilderness with only the bare essentials and they have to hike their way back to civilization, killing their food and finding shelter along the way. What makes it better than, say, Survivor, is that there’s no prize at the end. They’re all doing it just for the experience and subsequently, there’s no backstabbing or even any fighting of any kind. They’re all in it together and they all want to prevent anyone from dropping out of the adventure because the less people in the group, the more work for the group. It’s not just a study in survival; it’s a study in teamwork. And because the show was well-cast with a range of likable character types, it’s eminently watchable. 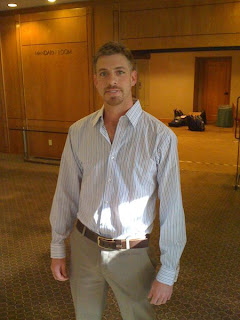 While watching the first episode, our heads lit up and a loud clanging noise was heard. Fellow gays will recall that this is what happens when our gaydar is activated (Don’t tell the straights, girls. It just alarms them.). See, there was this one guy on the show, Jake, and while he didn’t fit the stereotype of “reality show gay” (or even “gay,” for that matter), he pinged big time. Our curiosity piqued, we turned to the google. Sure enough, we were right. Not only is Jake Nodar a non-stereotypical gay on a reality show – he’s a HORSE TRAINER, for God’s sake – he is, in fact, the very first out gay man to ever appear on the Discovery Channel. A fact that is both appalling and thrilling at the same time.

But let’s be clear here: he’s non-stereotypical in the sense that he’s the kind of gay – outdoorsy, adventurous, strong-willed and low-key – that we all know exist, but never see on TV. On the other hand, he’s funny and witty and is the person in the group that does the most cheerleading 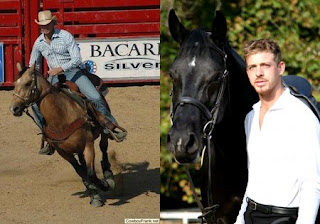 to keep everyone going, qualities that are more familiar and more stereotypical in nature. AfterElton gives him a chance to give an insider’s recap of each episode and his entries are hysterical. Plus, apparently, he’s a fan of Project Runway and Top Design. Truly a gay after our own hearts, even if we’re a little scared of horses. Ladies, he’s killed more food than anyone else in the group! That makes him our hero. Plus he’s cute, although it’s a little hard to tell by Week 3 of no bathing or grooming.

Anyway, we just wanted to give a little shoutout to a show that we’re enjoying immensely and would have enjoyed with or without a gay representin’, but having a fellow sister there makes it all the more interesting to us, especially when it’s a sister who shatters expectations about gay men.

Catch Out of the Wild: The Alaska Experiment on Discovery, Tuesdays at 10 EST, but make sure you watch the first four episodes On Demand first to get caught up. No, we’re not blogging the show.