Counting Down The 20 BEST Celebrity Style Looks of 2021: PART ONE Let’s start with the verbatim stuff. When faced with the task of summing up the past year in celebrity style, our very first response was “Jeez, where do we start?” To borrow a much-repeated phrase of the past few years, this isn’t normal. Not for us, anyway. We like to pretend that there’s some sort of long, arduous, meticulously considered process we use to compile these lists, but we’ll be honest: We usually start putting them together within hours of posting the first entry. Fashion is as much about feeling as it is about artistry or skill. Every item on this list already got an hour of consideration from us and about 150-200 words of critical assessment on average (which you can revisit by clicking the caption over each picture). At this point, it’s all about the feeling for us and we can each breeze through an entire year’s worth of style coverage and pick our favorites in no time at all. If there’s any real work involved, it’s integrating each of our choices into a master list. Every year, we tend to automatically agree on about eighty percent of the final list. It’s that hard-fought twenty percent that tends to make things interesting.

But we did approach the task this year with some confusion, instead of our usual feel-our-way-through approach. If there’s one word we could use to sum up the year in celebrity fashion, it’s “weird.” That’s probably not too much of a shock, since you could apply that word to practically any aspect of 2021 and get countless vigorous nods in agreement. Let’s face it: we live in weird fucking times, people. Celebrities spent most of 2020 dressing for Zoom appearances or Instagram posts, which seems fairly normal these days but represented a radical shift in how stars promote themselves. It was no less weird than our 2021 coverage, but it was interesting to sort of unpack this new way of launching premieres or accepting awards.

This year, the red carpets returned (like pretty much everything else); first a bit tentatively and then with great force and exuberance. During lockdown, many words were spilled and opinions spewed about how we were all going to enter a time of anti-fashion; a time of comfort and self expression that defied capitalist norms. We had our doubts and we tend to think they were born out this year. Regardless of whatever else is going on in the world, celebrities decided to more or less embrace the new Roaring ’20s. Much like the original version of that post-pandemic decade, the elite fashion response was to go louder, glitzier, and more flamboyant, embracing elements of queer presentation and elevating design elements and motifs from cultures not normally elevated in American mainstream elite fashion. All of these count as very good things in our book, although we note how often the mainstream (especially the elite mainstream) has played around with queer culture and appropriated other ethnic, racial or cultural styles only to treat them as fads and drop them suddenly. But for now, we’re just happy to see an array of red carpetry that truly feels different; as if things have changed in the culture. As for the weird part, we suppose one prediction about where fashion was heading did come true this year: everyone clearly feels much freer to fly their freak flag a little, even if the ones on this list did it with some of the world’s most expensive fashion and luxury goods. The result is that this may be the most interesting selection of year-end choices we’ve ever made.

Anyway, most of you probably skipped right past this to argue with those choices, so let’s get to it, shall we? One of the big celebrity style developments of 2021 occurred in the men’s section of the red carpet. After years imploring male stars to stop dressing like lawyers or Home Depot employees and start dressing like artists or rock stars, we were thrilled to see so many of them take the dandy approach this year. Velvet suddenly became de rigueur among male stars, even the ones we’d never have predicted, like Mr. Momoa here. Of course there are some technical quibbles we could make here, but the point is that Jason Momoa is wearing a gorgeous velvet blazer, brocade waistcoat, and matching velvet slippers on the red carpet. We are all duty-bound to support and applaud this development.

19. Daniel Craig in Anderson & Sheppard at the “No Time to Die” Royal World Premiere We should note here that this year’s list has more men on it (nearly half the list) than ever before, due largely to the aforementioned embrace of dandyism. Keep it up, dudes. Anyway, you might not think this would be one of the most compelling looks of the year, but we think it really says something about this shift toward high-fashion self-expression among male stars when James Bond himself is hitting the red carpet in a pink velvet formal jacket. And not for nothing, but he looked stunning in it.

18. Viola Davis in Lavie by CK at the Golden Globes An equally welcome and exciting development in celebrity style this year was the embrace of international designers and the trend toward wearing fashion styles from areas of the other world other than Europe and the Americas. Cameroon-born designer Claude Kameni’s Lavie By CK line has been embraced by Black female celebrities quite a bit in the last few years, but having a nominee sport one of his designs at the Golden Globes was a big step up in recognition. 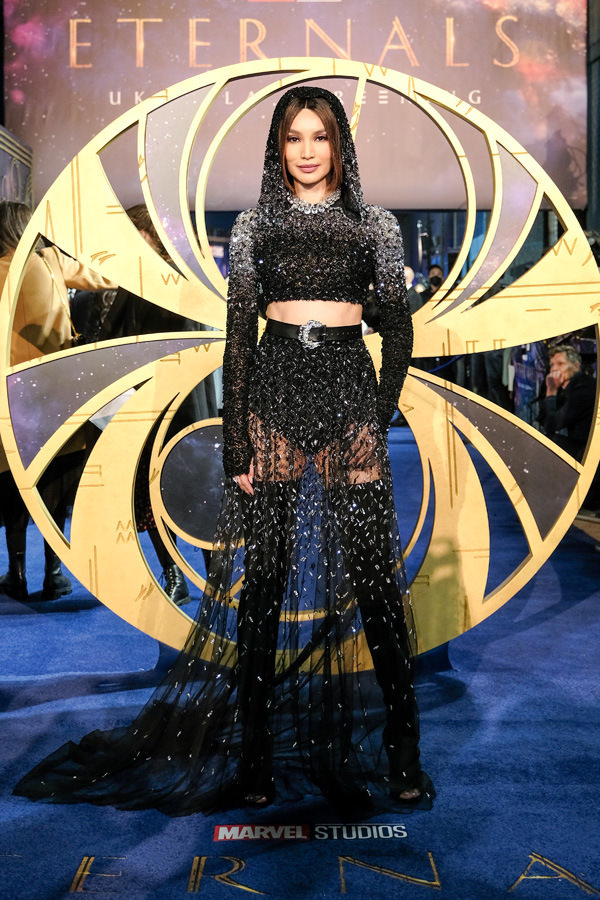 This gorgeous little space nun number would be one of the prime examples of celebrities flying that fashion freak flag this year. Not only would a look like this have been unlikely on a Disney-sponsored red carpet just a few years ago; we suspect it would have been discouraged by higher-ups. But we’re far from the days of princess gowns and bandage dresses in 2021.

16. Lupita Nyong’o in Atelier Versace at the Met Gala Miss Lupita did not give us too many style servings this year, but we would have found it tragic nonetheless if our year-end list didn’t have at least one of them. This year’s Met Gala was the usual string of poorly interpreted thematic looks, but she was one of the few attendees who showed up demonstrating a clear understanding of what was being celebrated by this year’s exhibit: American fashion. And what could be more American than a denim gown that looks Hollywood premiere-ready AND an homage to Black women’s hair?