We’re kind of confused about the Eternals promo tour. We can understand why perhaps the most famous members of a large cast are pushed to the front, but we don’t get why practically the whole publicity tour has come down to these four alone. At the very least, we bet Kumail would do more than show up in an undershirt every day. Sure. Okay. Can’t really argue with anything here, even if it feels like she’s been wearing the same outfit every day. We don’t know why, but it feels like the sandals (which really are kind of fabulous) are showier than her usual shoe choice. We’re not opposed to uncollared shirts worn with suits, but we really do hate when they’re white or gray because it just looks like an undershirt instead of something chosen to coordinate with the suit. This one’s worse than normal because the collar is all stretched out, giving him a dingy, sloppy effect. And we’re sorry, but it just looks like someone took his laces away because they thought he was going to hurt himself. Once again, Miss Gemma delivers when her castmates coast. The cape is kind of fun (if a little bridal), but we tend to think they look weird with miniskirts. Those strings hanging off her ruin the effect. Love the shoes, though. 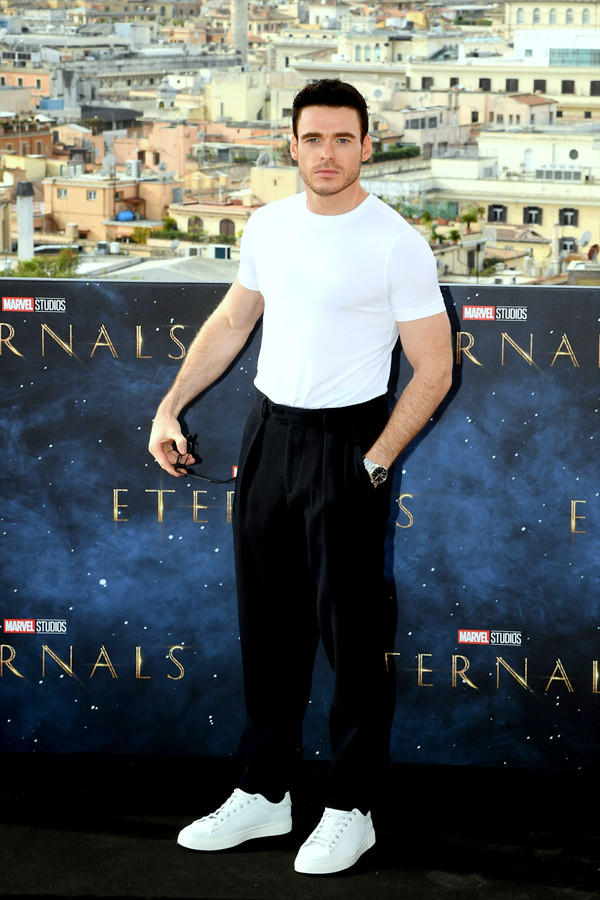 Your female co-stars are showing up in corsets and heels and you can’t even be bothered to put a shirt on. We might understand it if he looked spectacular in just a white t-shirt, but it just makes him look pasty and it looks goofy tucked into a pair of beltless dress pants.