We said yesterday, after her latest bit of Diana Prince cosplay, that Wonder Woman 1984 star Gal Gadot, would more than likely veer away from the theme-based dressing for her next appearance. She proved us right and wrong in a single day.

First up, the “proving us right” portion of our program (always our favorite part):

In Versace at the Seoul Virtual Press Tour Hunh. You’d think she’d be a perfect fit for a spin on the classic Versace safety pin dress, but this really falls flat as a design. The neckline is way too complicated for its own good and all of the safety pins are oddly placed. Just an underwhelming and slightly awkward design for someone who’s so good at picking and working dramatic and well-suited looks. We’re a little surprised to see this, to be honest. It’s one of those looks we’d have assumed she’d send back after trying it on. Maybe she’s  not a Versace girl, given the kind of fashion that suits her best. Case in point:

In Valentino at the China Virtual Press Tour Give this lady some sweep, a bold color and a touch of sparkle and she goes goddess on you. Versace’s tacky fussiness really isn’t her bag, we think. Dramatic and somewhat classic looks are where it’s at for this Wonder Woman. She looks amazing in this. 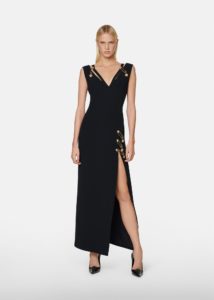