Gal Gadot did a virtual press event for DC Fandome with the cast of Wonder Woman 1984 and sprinkled a few behind-the-scenes shots to give us the best possible look at her outfit. We thank the Wonder Team for these fashion blessings. Of all the superhero movie stars out there, she’s perhaps the only one who dresses to evoke her character in such an open and obvious way. She doesn’t stick exclusively to a red, white or blue motif during her Wonder-promos, but it sure is prevalent – and almost always finished off with a metallic. This is pure Diana Prince cosplay in a lot of ways and while we tend to think dressing like your character isn’t always the best idea for an actor, this particular character has an unusually long and deep history as a fashion icon for generations. This isn’t just chic, it’s well-executed branding.

Anyway she looks fabulously chic and this is all the very definition of being “on point.” We bet the next look will veer away from this sort of approach, though. This was specifically a fan-oriented event, which makes Comic-con style cosplay a no-brainer. 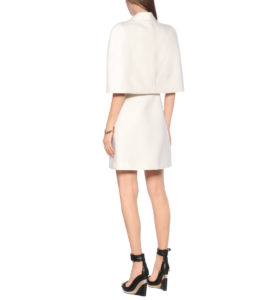