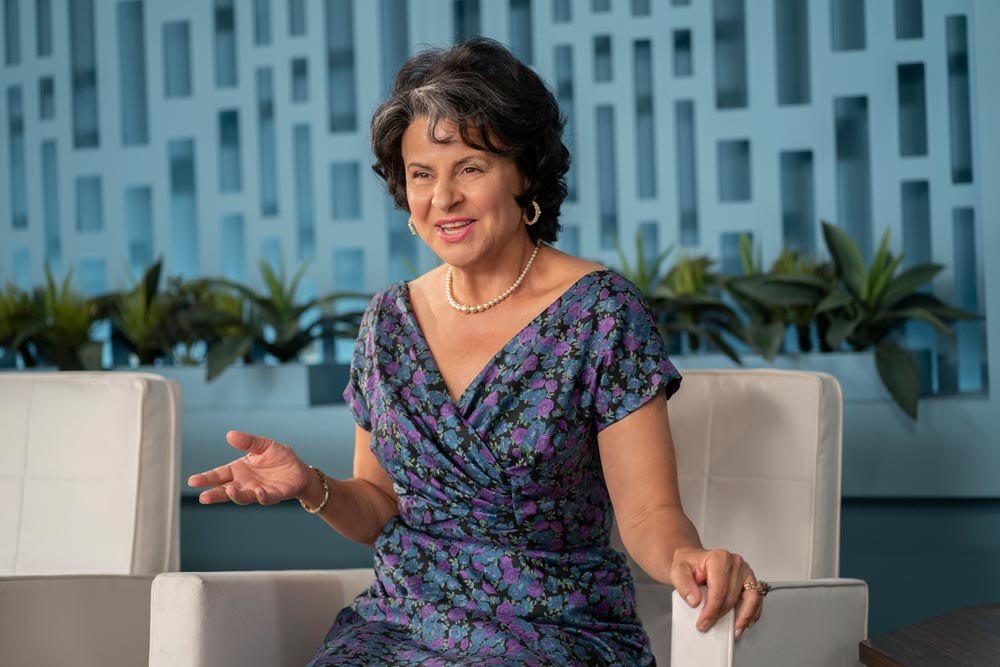 Here is something we’ve learned after a decade of writing several hundred costume design analyses: As a television series progresses, the analysis of the costume design winds up becoming less and less specific. This is especially true if the series is not taking big leaps forward in time. With Mad Men, we had the benefit of documenting and analyzing the explosive changes in fashion that occurred over the decade in which the series is set. But with Mrs. America, we’re four episodes in and not only has the time period not shifted dramatically, but all of the players have had their respective style motifs well established at this point. In case you missed them, we wrote pieces on Phyllis Schlafly, Gloria Steinem and Shirley Chisholm, all of whom had very distinct styles which have been well-rendered and duplicated by the show’s costume designer, Bina Daigeler.

If there’s a framework for the costume design this episode, it would be the various groups of women and how their styles were represented. Unlike the first few episodes, which were devoted to Phyllis, Gloria and Shirley (We didn’t realize until now how all of these women had SUCH early 20th Century names), the focus has expanded to include the movements that have sprung up around them or in response to them. As we noted earlier, costume designer Dina Baigeler is, in many ways, allowing the leaders of each movement – all of whose style choices were well documented in the media – to serve as the template for each movement. In the above scene at the National Women’s Political Caucus convention, Gloria’s trendy stylishness, Bella’s space-taking style, Jill Ruckelshaus’s (Elizabeth Banks) mainstream Republican political style, and Shirley Chisholm’s respectability drag are all represented and on display.

As for Betty, we did a little research on her style during this period and we owe her a bit of an apology. She was actually a lot more stylish than we’d realized. Not perhaps as on-trend and up-to-the-minute as Gloria, who she sees as her prettier, younger, more attention-getting replacement, but as far as we can tell, the ’70s print dresses we see her wear throughout this episode are a very good representation of her style. which had that sort of Diane von Furstenberg/Donna Karan ’70s Manhattanite feel to it. Having said that, this episode went out of its way to show she’s not as up-to-the-minute on these things as she might like to be:

A somewhat obvious use of costume design to make a very clear point about a character. Betty wore the dress from her Tonight Show appearance a decade before on a blind date because – as this episode’s script and direction made crystal clear – she is holding on to her claim to fame at a time when her influence feels like it’s slipping away from her. The other women get to be figureheads of entire movements while she seems to be barely be tolerated.

And speaking of figureheads …

At Schlafly Central, all the very much NOT single ladies fall in formation behind her. The look is still respectable white suburban styles – although it feels a bit like each of these women stepped up their game just a little in the time since they first formed. Sarah Paulson’s Alice, for instance, looks office-appropriate for the first time. The message is in the costumes, all of which look more professional in tone: they’re not amateurs anymore. In other words, they have eased into the styles of the working woman of the period, ironically enough.

And speaking of offices and professional dress codes …

The offices of Ms. have a far looser, younger, more urban feel to them than the de facto Stop ERA offices do, with jeans and boots and nary a wash-and-set in sight. Margaret Sloan’s afro stands out as much as her bright yellow turtleneck as she gently tries to introduce the other women to intersectionality only to have them all wave off the idea. Like the rest of the principle characters, Margaret Sloan’s known personal style – a ’70s-trendy afro-boho style that reflected both her lesbianism and her status as a black intellectual – was used as a template for the rest of the women in her movement:

A dead-on representation of the styles favored among the black feminist/intellectual set of the early seventies, with some of the distinctive flair of Florynce Kennedy’s (Niecy Nash) style in the mix. We sort of danced around this in our discussion of Shirley Chisholm’s political style, but here it is, nicely laid out: all the styles of the politically conscious black woman of the period, none of which were utilized or referred to in Shirley’s style. No head wraps, no animal prints, no beads or large earrings or natural hair – these options weren’t on the table for Shirley or maybe she didn’t feel they reflected her personality.

Note how warm the color story is for this scene – browns and deep reds and oranges dominate. Compare that to the coordinated neutrals, pastels and cool blues of the Schlafly movement above. And then note how the Ms. offices (which are routinely depicted as chaotic) don’t seem to have any sort of cohesive color story or look to them.

We can’t help noting that Shirley is in a red-white-and-blue floral dress, stressed out over the witch hunt investigation regarding her candidacy. The only other time she wore a floral dress – also in red, white and blue – was when she stood onstage at the Democratic convention, giving her hard-earned delegates away to George McGovern.

That same sort of autumnal color story and afro-boho style of the scene depicting the birth of the National Black Feminist Organization is carried over into the scene where Margaret and Gloria sort of part ways, a little disappointed at the outcome. While it’s historically appropriate for both to be wearing them as they were known to at the time, we couldn’t help noting how Margaret and Gloria’s matching aviators hint at a connection despite their differences.