Big Little Lies‘ second season may not have reached the heights we’d all hoped for (you can read our review here), but if nothing else, at least it gave us some killer costume porn to talk about each week, courtesy of the stunning efforts of the series’ award-winning costume designer Alix Friedberg. We took a look at a couple of Renata’s costumes this season, and talked about how they illustrated her state of mind and more importantly, the kind of image she wanted to project to the community around her, which is abnormally obsessed with image relative to other communities.

This week, we’re focusing on one of Celeste’s looks. And just like Renata’s, it illustrates both how Celeste is feeling at the moment and also very much how she wants other people to see her. On the day in which the judge will rule as to whether she’s a fit enough mother to continue to be allowed to raise her children; after revelations of parental violence and intimations of an unsavory-to-the-community sex life, knowing that she was losing the battle and in preparation for a final showdown with her accuser, her hellish mother-in-law Mary Louise, Celeste ditched the chic sweaters or efficient businesswear for this: 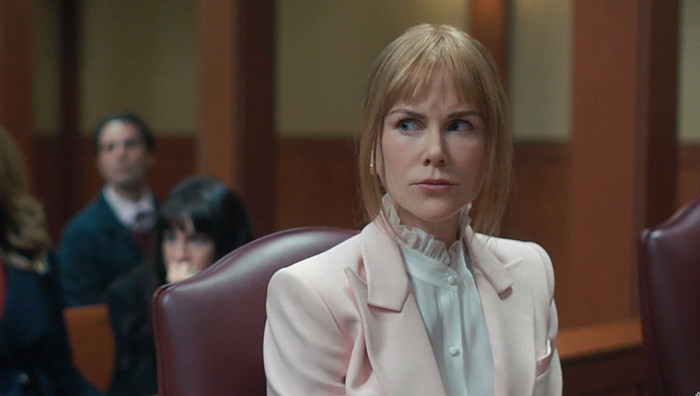 A soft pink fitted suit with a white blouse, high ruffled collar and ruffled cuffs, pearl earrings. The hair is soft, wispy and vaguely old-fashioned, the makeup is clean enough to be barely perceptible. It’s not a bomb-drop of an ensemble by any means. It’s both perfectly appropriate for a court date and in some ways, not all that far off from previous “lawyer drag” outfits she’s worn. But the pink is a rare choice for her, and in combination with the almost over-the-top primness of the blouse, it’s offering an image of old-fashioned femininity and demureness. It may have been maddeningly unfair for Celeste to have to answer for her sex life, but as a lawyer, and in a last-ditch effort, she knew projecting an image of stereotypical feminine purity was the best way for her to go. What’s interesting is how it’s rendered in a sharply tailored, very modern suit, with padded shoulders, a killer bag and pretty sweet set of heels. There’s a sense of competence being underlined here. It’s not the most subtle approach in the world, but the overwhelming image, cliched as it may be, is one of non-threatening, demure womanhood married to a steely sense of professionalism. Dressing this way may not have been why Celeste got to keep her kids, but as a lawyer, she was well aware that it wouldn’t hurt.