Home » Television » Project Runway: The Stitch is Back

Project Runway: The Stitch is Back 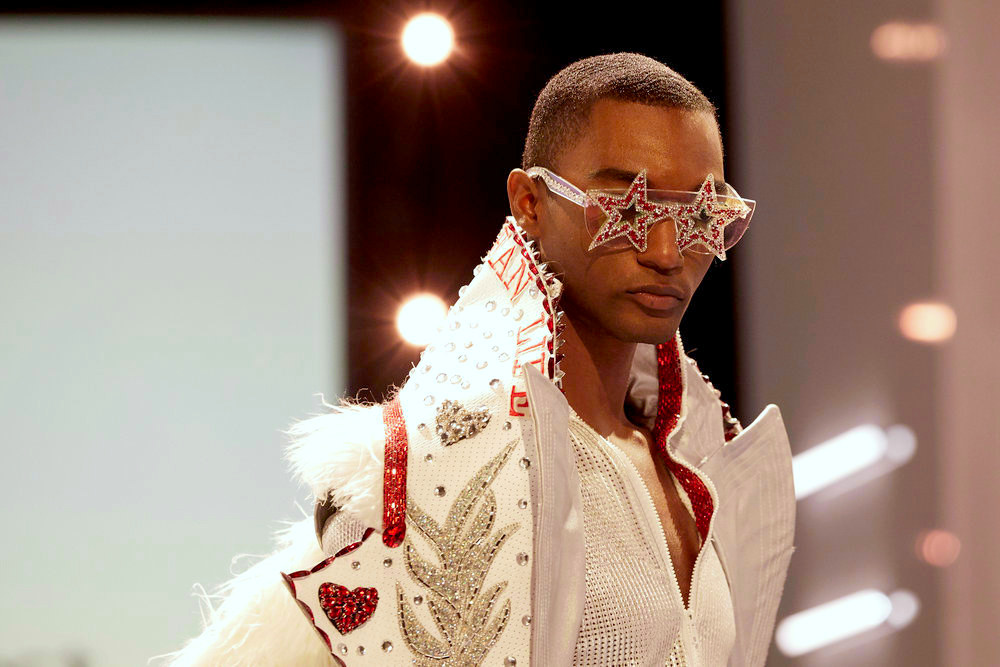 In many a past season of Project Runway the introduction of a menswear challenge was likely to send at least a few of the designers spiraling into meltdowns. Even if you’re the kind of designer who works with menswear, this kind of challenge is still likely to knock you off your game simply because you’ve been intently focused on womenswear throughout the competition. When you add the twist of not only doing stagewear, but modeling it on Elton John, you’ve really thrown these designers a hell of a curveball. To our complete delight, most of them stepped up admirably. The Rocketman tie-in was perhaps a bit heavy-handed, down to the movie’s star Taron “Nipples” Egerton doing a RuPaul-like video introduction, but that aside, we were thrilled to see a costume designer on the judging panel. We can’t say he brought any different sort of energy to the proceedings except perhaps for a very un-fashion world-like appreciation for everyone’s efforts. In another Drag Race-style twist, the eliminated designers were brought back to help and for the most part, things went fairly smoothly. It is, once again, a tribute to how this season was cast and how this cast was directed that the personality conflicts tend to play out like grownups with a disagreement rather than exhausting attention-seekers demanding camera time. Sonia was a bit bent out of shape that Garo didn’t give her more credit on the runway and while we think it maybe wasn’t fair to assume that’s where his focus should have been when he’s trying to compete, we have no doubt that, like most women, she’s spent a lot of time in her life and career having her work brushed aside by men or watching them take credit for it. On the other hand, coming at him while he’s still waiting to hear the judges’ final verdict was a bit self-centered of her. To her credit, she seemed to realize there was no point in pursuing the matter and congratulated him sincerely on his win. That’s it. That was the entirety of the conflict. On Lifetime, it would have resulted in tears and screaming. One quick aside before we judge: Some of the commentary about the male models was … well, we’ll just call it questionable. If any straight male designer went on and on about how glad he was to see hot women in the work room, how good they smelled, and the relative quality of their asses, it would not have gone over well. Male models get subject to the same objectification and sexual harassment that female models do and it was weird to see Project Runway allow that kind of commentary to go by unchallenged. A classic example of someone getting perhaps a little cocky in the competition. An Elton John-themed challenge should have been a no-brainer for Hester, given her aesthetic. How she wound up on “Gay Turkey” eludes us. To her credit, she knew it was a loser. It seemed weird to us that the judges were complaining about Venny’s use of feathers in an Elton John challenge. We get the point that he doesn’t use them well, but we didn’t think this was the time to complain that he uses them too much. Either way, this design was awful. The pant-train was a terrible idea and that should have been obvious long before it was executed. The rest of the look is a collection of cliches. Tessa’s weird fascination with unfinished hems is going to be her downfall in this competition. Still, this design was a lot better than we would have predicted, given her strict minimalism and total lack of color in her designs. We appreciate the way she played with the silhouette and tried to bump up the fabulousness. It’s a disaster, from top to bottom. Even if she didn’t have the time management issues or the problem with the glue stain, this design was too basic and kind of cheap-looking. Damn near perfect. The use of denim and faux fur was a brilliant idea and that t-shirt design (while perhaps a bit too straight for Sir Elton) was a fabulous touch. As much as we loved Garo’s, we think this might have been a better choice for the win. We don’t understand the judges gushing over this one. Taken from an avant-garde design perspective, we think it’s worthy of positive commentary and maybe even praise, but we really couldn’t see much Elton John in this, let alone stagewear. It’s just a bit too conceptual and body-obscuring for this kind of challenge. This is truly fantastic and it’s shocking how much he and Sonia accomplished in such a short time. This next bit is going to sound nitpicky, but when your choices are this excellent entry and Bishme’s equally excellent one, nitpicking is all you have to differentiate. This looked like something we’d seen before. There wasn’t much originality in the design. And truth be told, it came off a bit too ’70s funk a la Bootsy Collins rather than ’70s queer a la Sir Elton. An amazing job, but that minor quibble has us thinking Bishme should’ve taken this one.