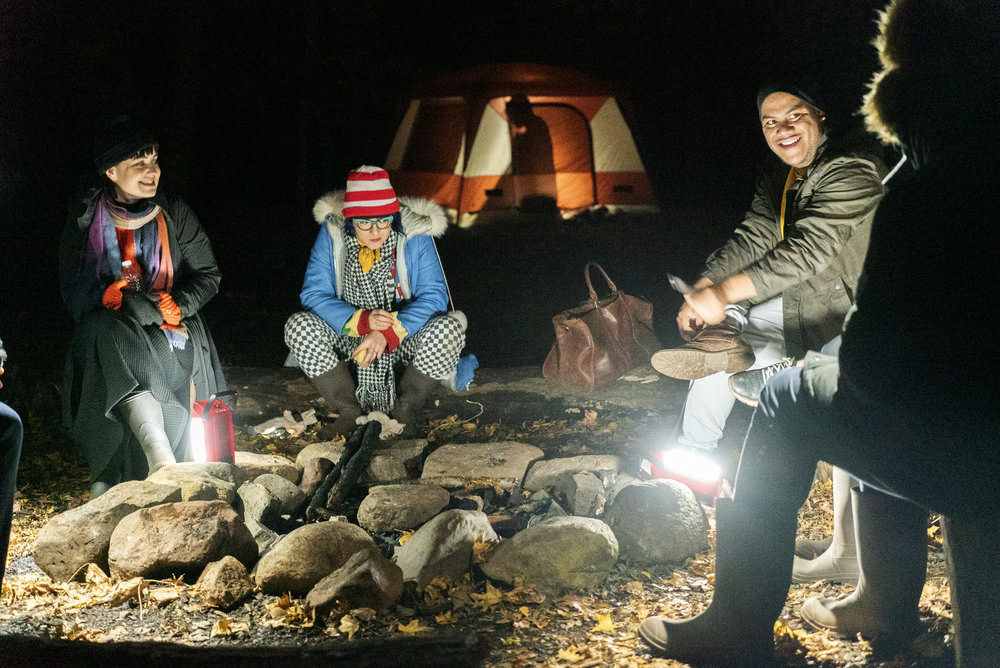 We had to laugh a little at the premise of this episode.

Oh, don’t get us wrong. It was a fine one. More than fine, in fact. It may be our favorite single episode of Project Runway in more years than we’d care to count. Unconventional materials challenges are at the heart of the Project Runway brand and experience and every season comes with high expectations for the challenge. And we’d say the results on the runway this week put the lie to the idea that this crop of designers isn’t showing any great talent. There are some good ones in this bunch; possibly really good ones. But we did find it kind of amusing, after we wrote a couple reviews of Nu-PR and noting how it seemed to take some cues from the much kinder and gentler British Bake-Off, to discover that they literally sent them out to work in tents in the open air, just like the beloved baking show does. And while you could argue that sending the designers out into the cold and wet to do their magic is a gimmicky sort of flaming reality television hoop designed to produce drama, the end result was a fun, telegenic (everything just looked great) episode where the gimmick not only produced some fine fashion, but some entertaining interactions and a couple of judiciously applied spotlights on designers who hadn’t gotten them yet. After so many years of watching this show (and seeing it spiral down into a cheap, drama-driven enterprise populated by some of the most annoying attention-seekers to ever grace our TV), it’s really taken us a while to get used to the idea that this crop of designers has no interest in rivalries or drama. Quite the opposite, in fact. We’ve never seen a group of designers bond so quickly and spend so much time helping each other out and offering gentle critiques – when asked – of each other’s work. It turns out, watching creative people struggle to create while bonding with each other is all the drama PR ever really needed. Of course, if you’d seen the first three or four seasons of the show, you knew that already. And like those often-cited seasons, which are sometimes recalled with a bit too golden a haze by its fans, we have no doubt that fights are going to happen and people are going to snap under the pressure in episodes to come. But for now, we are incredibly entertained by scenes of the designers laughing around a campfire, lending each other materials and advice, and cheering with true happiness when a fellow designer produces something worthy of praise. We suppose you could argue that it’s just kismet that this group of designers is the most supportive and friendly crop in years. But TV production isn’t about flipping on the mics and cameras and hoping you get something worth watching. This season has been cast and directed to keep the drama to a minimum, we think. Despite the insanity of the cold and the wet, the runway portion was really fun to watch. The judging sessions remain energetic and fun. They get excited about good design and constructive about the bad ones. We have yet to hear anyone on this panel go for a quick, bitchy (and ultimately useless) quip. Also, it’s going to sound really snotty of us to say this, but from a hostessing perspective, there’s an entirely different energy when she can just slip in something about the time she covered French Vogue. No tea, no shade. Heidi Klum has had one of the most amazing post-modeling careers of anyone in the game but Karlie Kloss has had one of the most prestigious and high-ranking modeling careers of anyone in the last decade. It makes a difference when she offers her opinion. Brandon remains a whole lot of fun and very much in Baby Kors mode.  Nina and Elaine have a slightly different energy and we suspect they will eventually come to a hard disagreement over someone’s look. We look forward to hearing them really hash something out.

Fashion review (stay tuned for today’s podcast, in which we bicker further over the runway offerings): Love the skirt. A chic and eye-catching design that almost makes us believe you could sell real clothing with sticks and stones on it. The jacket’s fun too. The ropey bodice idea was way overdone this week. Like so. Lorenzo thought this was a failure of imagination from top to bottom. Tom thought the bodice work was nice and the color usage smart. We realize that the brief called for “survival fashion” and that the judges ultimately gave it to the person who embodied that concept best in her work, we still think this is goofy and awful. Again, the rope work was overdone among the offerings this week, but her bodice design is nice and we LOVE that she piped the hem of the skirt. Personally, we gravitated more toward the fashiony looks like this one rather than the ones who basically made high-end camping gear. Love Sebastian, still think he’s one to watch (and also cute as hell), but this was really unimaginative and in retrospect, had nothing to do with the survival brief. 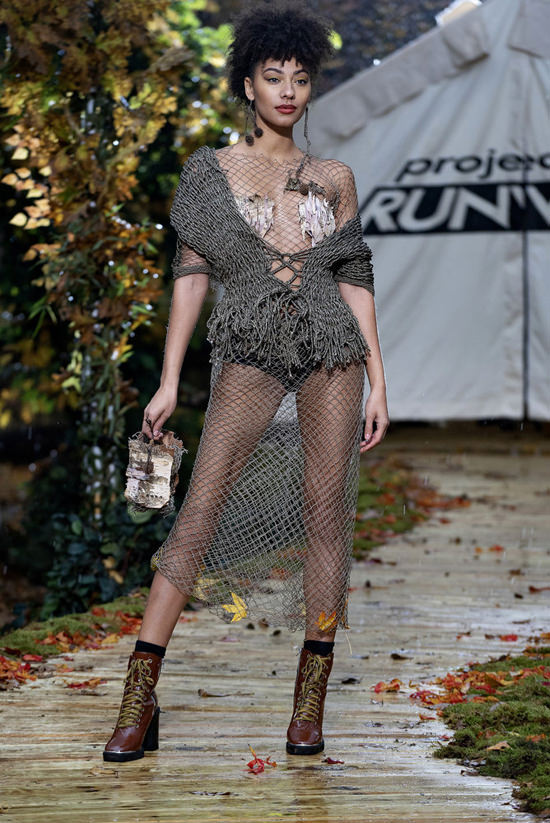 This is just a little too cray for us, but we are deeply impressed that she wove that textile herself. The judges made a big deal out of Afa’s shivering model, but they didn’t seem to have any issue with this nearly-naked offering. Good use of materials, decent execution of the design brief, but we just don’t love this as a look. It’s too costumey. Sonia went careening off the rails this week. And we think she should have been critiqued a bit more for relying almost entirely on an existent piece of fabric to make her dress when so many others were weaving and roping and doing leaf appliques. An utterly ridiculous nightmare of a look which, combined with his somewhat too self-aware camera-hogging is leading us to think that Kovid may not be right for this competition. This is just idea after idea after idea thrown together with no overriding concept or aesthetic. 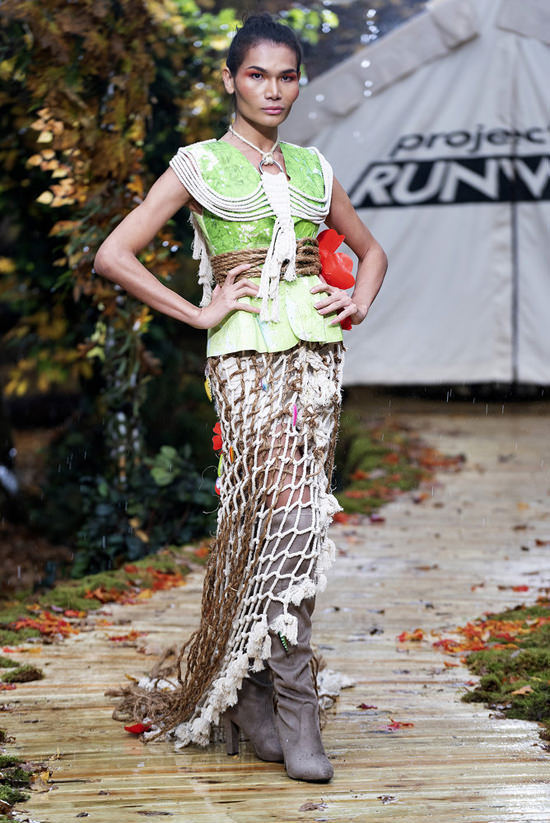 Afa’s a total sweetheart and we were truly sorry to see him go, but there was nothing redeemable about this look. From tip to toe, it’s all bad. 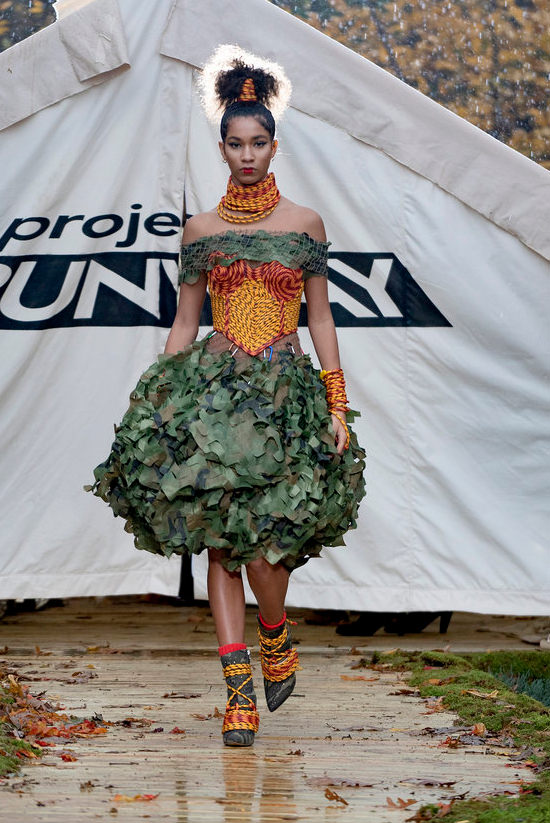 This is stunningly designed and beautifully styled. People who think Hester’s just a camera hog should re-assess. She’s got raw talent to spare. This was probably too high-fashion to win the challenge, but we think it was the best look on that runway by a mile. 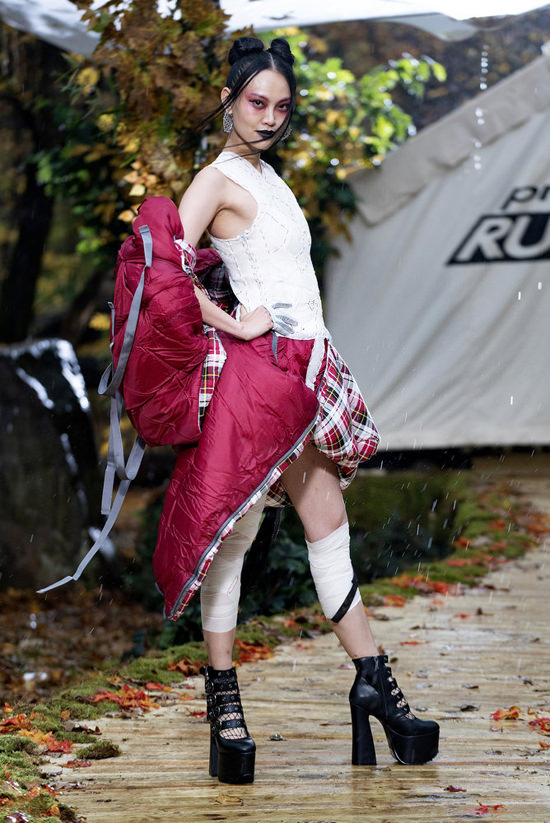 Rakan got a minute to show his charm and sense of humor this week. He also got a chance to show how far he can take things as a designer. This is really creative and superbly styled for the runway, producing an instantly memorable look that tells a story. Marni and Christian have been providing really great, workable advice to these designers. In the light of day we can admit that yes, this really is quite well designed and executed with a lot of really smart touches. But compared to the other two looks in the top three, this one seems fairly basic with a LOT of existing items added to it to make it complete. If anything, it’s over-styled. We don’t think the look can stand on its own without all the camping gewgaws hanging off it.

More thoughts on all of the above – including some not-minor disagreement – in today’s podcast: