We simply had to give Emily and Ben their own spotlight posts, just for dressing so spectacularly and/or so attention-seekingly. Look, it’s Friday. Let us make up awkward words and phrases just to get through, okay? Attention-seekingly.

Anyway, let’s judge the rest of the cast – and one notable Company Woman, who knows how to do her job. He looks TERRIBLE. WHAT WAS HE THINKING?!

We’re joking, of course. Love his jaunty little walking stick. Also: you will cry when you see him in the film. It’s like Santa Claus suddenly showed up. It’s pretty and sparkly. We appreciate the pop of red velvet, which takes it somewhere holiday-themed without being too literal about it. It would be a better dress without the sheer ruffles, though. And unfortunately for her, a much more exuberant white dress walked that red carpet and stole a little of this dress’s thunder. Attention-seekingly, you might say. You can always count on this Marvel gal to show up at any high-ranking Disney red carpet. It’s damn smart of her, we say. We really like the sweater and kind of like the skirt (the shape’s a bit much to take), but we really can’t see them working together. Too much of a disconnect. Also: that looks like a toy purse. 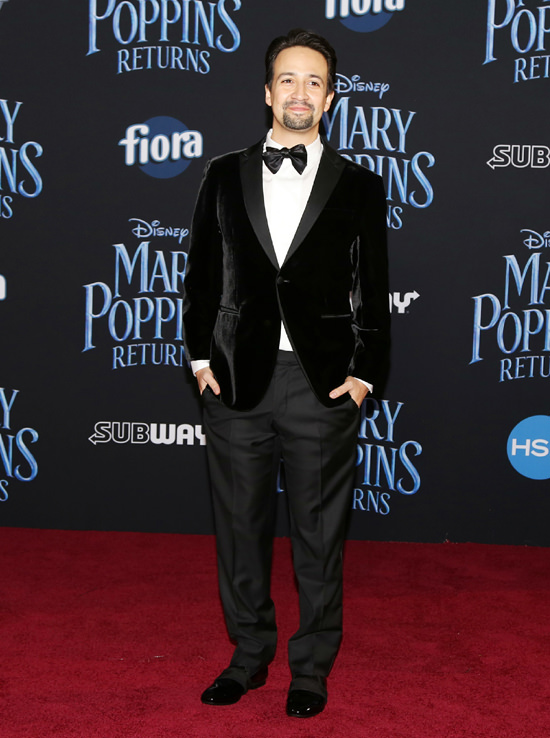 We know he’s beloved and that his fans will get angry at us for saying this, but there is no excuse for a man to be walking around with huge puddles of fabric at his feet. The look is fairly generic, which means it’s even more important that all the details are right. Those Little Tramp pants ruin the entire look. We just adore KidStyle on the red carpet when it’s done really well. Let kids be kids but do Hollywood it up a little. That’s the approach here and it’s charming and photogenic. Her whole look is exuberantly over the top and we can’t see one reason why it shouldn’t be that way. She looks adorable.

All three of the film’s child stars are charming, funny, exceedingly comfortable on camera and totally un-precocious, by the way.

Previous post:
Lady Gaga Gets Serious in Azzedine Alaïa at the 2018 American Cinematheque Award Next Post:
Style File: Tyra Banks Does Not Go Quietly in NYC