You didn’t think we were DONE did you?

Oh, darlings. We have not yet begun to bitch. Crack your knuckles, get your coffee, and let’s get this mother started, right? 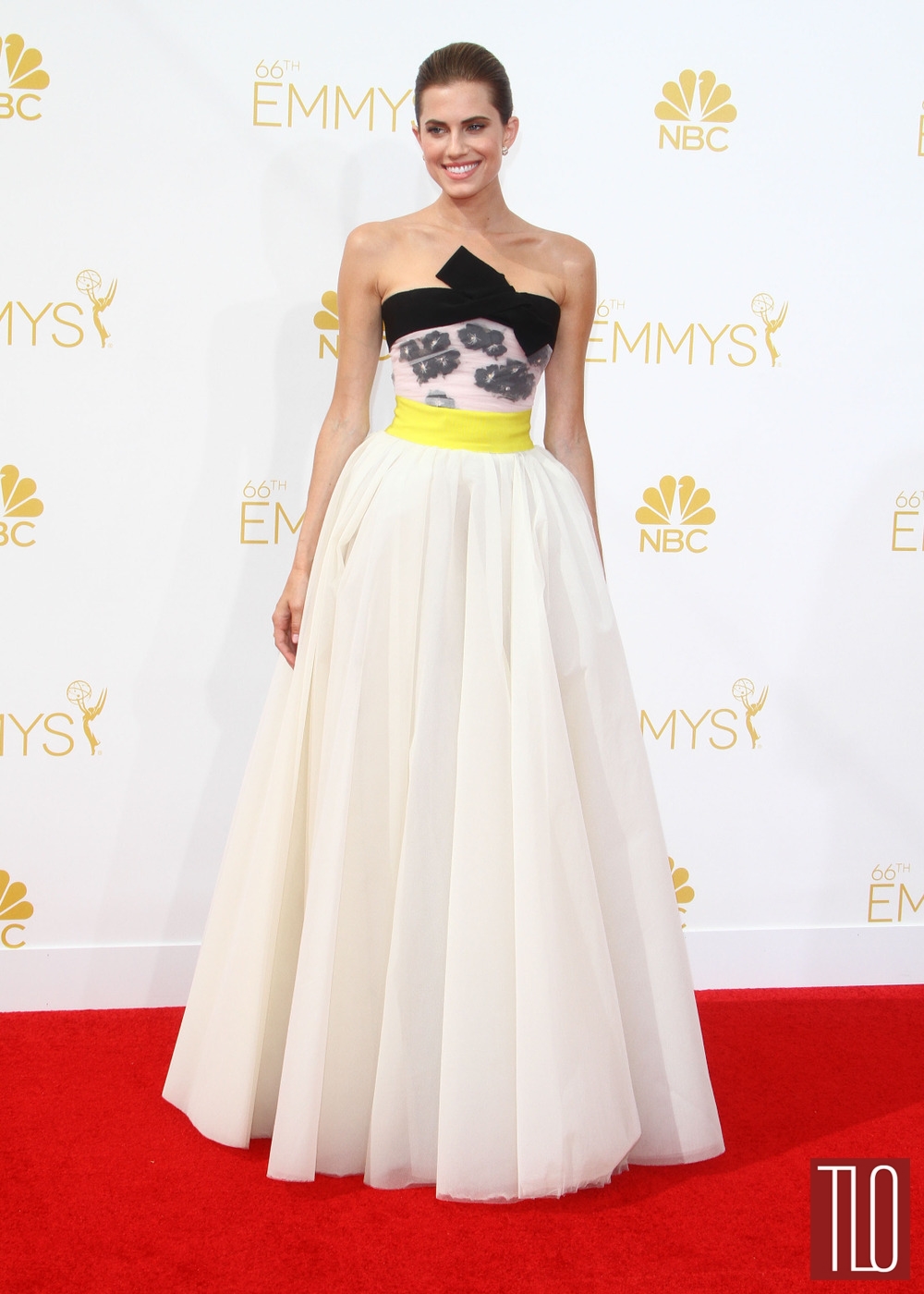 Disappointing. We’re surprised by how boring and low-key this is. If there’s one thing Heidi really knows how to do, it’s dress for attention. We have to think that if she really thought Project Runway had a shot at winning, she’d have worn something a lot showier than this. SHOCKED by how ugly this is. The orange color is terrible for her and the random elements make it look like a child’s drawing of a dress. The perfect dress to wear when you plan on being treated like shawarma meat.

The same exact dress she’s been wearing for the last however many years.

We suspect an A-Line skirt would make her break out in hives.

A turtleneck would inspire a full-on medical crisis.

She does look fantastic, though. We’re not suggesting otherwise. We like the colors, but the neckline and the high belt combine to make it a little stumpifying. Have to admit, this is very, very pretty. Girl that is ONE HUNDRED PERCENT not your dress.  You do not have the coloring for metallic golds. You could probably rock the silvers, though. Cute skirt, but the top erases her waist. It’s tasteful and she looks pretty, but she fails at the whole “get some time in the spotlight” part of the style brief.

Cringe in horror at her poor foot. Surprisingly pretty (because she doesn’t always have great instincts), but the clutch is a poor choice. It all kind of goes south at the knees, and the color combo really isn’t very photogenic, but at least it’s a little different. We’d like it more if the underskirt went to the floor and she was wearing a thin metallic belt to dress it up. It’s not a bad dress, but it’s a little boxy. We probably should’ve given her her own entry, because we need more space to explain ourselves, but her style choices aren’t helping her. It comes down to this: we are all for the idea of her wearing little or no makeup and jewelry on the red carpet, which seems to be her thing. But she tends to choose outfits that don’t really go with that minimalist approach. This dress and this color really kind of require some form of polish and embellishment in order to work. If she wants to go clean and spare in her styling, then she needs to go clean and spare in her fashion choices. Call it the Shailene Woodley effect. Kudos to her. It’s interesting. We’re not saying we love every bit of it, but let’s face it: of all the major awards show red carpets, the Emmys tend to be the most conformist. We appreciate it when someone gives us something to look at without looking like a clown or a stripper. Pretty, if a little less than fabulous. This was one of the biggest disappointments of the night. A total Girl, That’s Not Your Dress moment. It does nothing for her figure or her coloring.

We have no idea why this chick ever gets it wrong. How hard can it be for a tall, skinny, pretty, blonde white girl to find the right outfit for herself? It’s all for you, honey. There’s low-key and tasteful and then there’s “don’t look at me.” This is fine for some private gala, but it’s just wrongheaded for something like the Emmys red carpet. You don’t have to dress like a clown, but you should dress toward the idea of how it looks in pictures and on TV. This is a black hole. Eye-catching, but the sash is terrible. Oof, no. We love ourselves some Allison Janney, but the shoes look granny and the dress is just way too heavy and thick in the front. The color looks pretty great on her, and while you can’t tell it in this lighting, her makeup was fabulous on stage, but the dress and shoes are just awful. It’s a very pretty dress, but it should probably be on Viola Davis. She’s too pale and small to make this work. She looks overwhelmed by it. Simple but striking. Gets the job done. She’s posing like her life depended on it. REALLY awful. It’s that weird combo of body-con and matronly at the same time. Like an attention-seeking mother-of-the-bride. We’re shocked, because she’s pretty damn stylish, usually. We like a good print, but this looked a little casual to us. Didn’t love the collar on her. You have GOT to give it up for this girl, for making what looks to be a very difficult dress to wear (color-wise, at least) look insanely gorgeous on her.