Glee Season 2 Episode 14: Blame it on the Alcohol 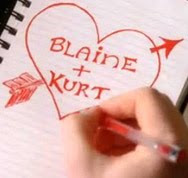 In our ongoing quest to constantly have something to complain about, we think we settled on something with Glee. See, with this season, we’ve largely accepted the show’s sometimes astonishing lack of consistency because

a)It’s been that way from Day One
b)We’ve come around to the idea that with a cast this large and a show that straddles this many genres, there’s no way it can be pulled off consistently in the manner of a more conventional TV comedy/drama.

Cute. We won’t even get into the likelihood of 16-year-olds in 2011 knowing all the words to a Human League song, but it’s a great rendition. We can’t help thinking it’s wasted on these two. They’re the two best performers on the show. We hope they get a chance to really tear up a classic Broadway number or even a modern pop song more suited to their vocal styles.

We loved the party scene in Rachel’s fathers’ Oscar party basement because it goes back to our new criticism of the show. Having mostly let go of the “inconsistent” complaint (although we reserve the right to raise it again at some point in the future), we’ve settled on what we really think is troubling the show and it’s one of the oldest and most common of mistakes with hit TV shows: it’s gotten just a little too slick.

Love the number. But – and we’re not suggesting that the show remain static in style – cast your mind back to the first time New Directions nailed a performance: when the much smaller group sang “Don’t Stop Believin’.” Remember how scrappy they were in their jeans and red shirts that didn’t even match? Remember the thrilling juxtaposition of nerdy outcasts putting their voices together and becoming so much more than the sum of their parts? Remember how the performance was so affecting because it was trying so hard to be sincere in a show otherwise characterized by cynicism? It’s a little hard to maintain a theme of underdogs coming together to grab some glory if they can routinely knock out these rather expertly staged and choreographed numbers and do them drunk.

HOWEVER, we feel like the show is making an attempt to get back to a slightly more cynical, darker feel, especially with this episode. Rachel is back to being funny again, because she’s where she belongs from a storytelling point of view: cast out and desperate. We’ve said it before but she’s so much funnier and more entertaining when she’s not dating the quarterback and constantly acknowledged as a world-class talent. The weirdness of her idea of a party was perfect for the character and we thought that was one of the better representations of what it’s like to be 16 and drunk in someone’s basement.

As for the Blaine subplot, it felt kind of rushed and unfinished, although it accomplished its main goal, which is to hammer home the point that of the two of them, Kurt is the one who has his head on (you’ll pardon the term) straight. Although not to the extent that he’s perfect, because while he had a point to make with his father, we thought he was awfully snotty about it and tried to turn a normal parental reaction into something like homophobia, which really isn’t fair to Burt.

See, this is a welcome return to old themes, as far as we’re concerned. Instead of “just” being sleazy and immature, the original Will was charming and a little sad because he felt like a loser. That’s a bit more of the Will we’re seeing here. Of course, he had to go and fuck it up by drunk dialing Emma, but even that felt pathetic in a funny kind of way rather than straight up sleazy.

And Matthew Morrison doesn’t get enough credit: he’s always had amazing chemistry with Jane Lynch, but the way he and Dot Jones play off each other is really a delight to see. Coach Bieste is just plain fucking awesome.

That’s how you do a “Don’t drink, kids” Special Episode, Glee-style. We thought it was hilarious. Heather Morris is so much fun when she’s given a number all her own.

Quote compiling is hard, you guys. Besides, you all do it so much better than we do, because we’re always getting them wrong or pissing someone off because we didn’t include their favorite. What were the funniest quotes of the episode? “Ke, dollar sign, ha,” had us sliding off the couch in laughter.