We can’t in good conscience pat the writers on the back too much this week because they took the subtext of this episode and made it the actual title of the episode. Tsk. Here endeth the criticism of the writing for this episode.

The subject this week couldn’t be simpler but it also couldn’t be more complicated: home; what that means to different people; how they go about making homes for themselves under bad circumstances or coming from shitty beginnings; and how the lack of one can slowly destroy a person from the inside out, or in one character’s case, from the outside in. 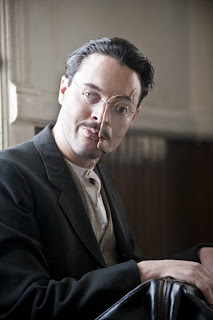 Nucky gets thrust quite unwillingly into his own past when his father suffers a fall and his brother, ever the favored son (he became a cop like dear old dad) offers to take him in. Nucky surveys the filthy landscape and decides it”s time to haul away the garbage and “Let some decent family make a home of this shitpile.” He thinks he can salvage something from his bad memories; exorcise his monster of a father out of the building so it can be what it was supposed to be but never was for him: a home.

Meanwhile, Margaret is settling in happily on Concubine Row. We have to admit, that’s one aspect of the story we have a bit of trouble swallowing. We get that Margaret is steel-spined and far more than she seems (in the Peggy Olson manner) but sometimes we think she’s a bit too self-assured and smooth. Like we said, she’s winging it; we get that. But we’re talking about a radical life change in the time frame of less than 6 months or so. She was a lower class (let’s face it: poor) immigrant wife to an abusive husband. Now she’s living in a gorgeously appointed townhouse, a widow, and the mistress of a corrupt politician. And she seems none the worse for wear. We like her character a lot but we’re starting to think her non-reaction to the kind of life changes that would send most people reeling is a little inhuman.

Anyway, she’s chatting with her new neighbor, who’s been doing this concubine thing for a while and has the opinions to prove it. She asks Margaret what she wants from Nucky. “I don’t want to lose all of this,” she says. Everything she’s done, she’s done to provide her children a home and better yet, a life unburdened by poverty and the lack of choices that come with it. “”Look at those curls!” says the neighbor to Margaret’s daughter. “Why, you’ll have no trouble getting a man at all.” And Margaret looks pained. This is about making sure her children, and especially her daughter, won’t have to live the life or make the choices she did. 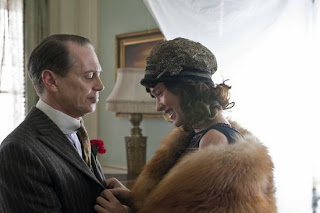 Then again, that’s the funny thing about Margaret. She acts pained about all this, but then she moves so smoothly and gracefully through it, as if she were born to it. There’s no doubt she likes the nicer clothes and jewelry, the restaurants, the well-appointed house. She can even laugh when the neighbor asks her “Then what’s that big bed for?” It’s like she knows she’s supposed to be morally conflicted about all this so she goes through the motions of feeling that way. But really, she loves it, not only for the material aspects, but because it requires her to constantly think about what to do next. Again, she’s no mastermind and we don’t doubt that a big part of her wishes her life isn’t what it is, but she’s enjoying both the game and the prizes.

Unfortunately, she takes what she later classifies as some “bad advice” and tries to prevent Nucky from opening up too much to her because the kind of men who keep girls on Concubine Row don’t like it when they appear weak to anyone. To be honest, given the precarious nature of her living situation and the confusing nature of her relationship with Nucky, we didn’t think it was such bad advice. We must just be a couple of old whores at heart. Then again, maybe Nucky is different from the other men. Certainly, there’s an innate vulnerability to him that you don’t see with any of the other male characters, not even the more obviously wounded ones like Jimmy. But Nucky has his scars too and they’re not just physical. We’re finally coming around a little to Buscemi’s performance here because the fact of the matter is, Nucky isn’t the tough guy, king of the world Tony Soprano/Don Draper type. He’s a little man who does everything he does so that the neighborhood kids don’t beat him so bad he winds up in the hospital or so that his father doesn’t brand his rage into his skin. The fact that he does want to open up to Margaret might not be such a bad thing. Obviously he never opened up to Lucy that way. When he sits in her dining room, reciting poems to the children and asking them to call him Uncle Nucky, we see that he didn’t set Margaret up to give her a home; he set her up to give him one. To be honest, we were kind of cheering the little guy on when he torched the old homestead. “Sometimes the past needs to stay in the past,” said Margaret when she first tried to cut him off. Nucky needed to get rid of it and he needed to give a final fuck you to his father. Send it all up in flames, like his forgotten Beach Patrol award. This was never his home.

As for Jimmy, save for Richard, the half-faced man, he might be the most scarred and the most in 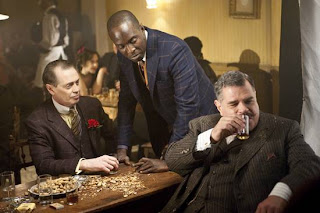 need of a home out of all of them. “It’s like a dull ache. Inside.” Now we understand why he was so dismissive of Capone’s inflated military service. Meeting Richard and seeing someone who looks on the outside how he feels on the inside, and better yet, someone who knows exactly what it was like to be Over There, satisfied something in him. He needs some form of affirmation that what he went through was monstrous and the only way he can get that is to try and help someone out who’s even more fucked up than he is about the whole thing. “This is where you live?” asks Richard when he takes him home to the whorehouse. Jimmy probably isn’t capable of having a family in the conventional sense, but getting his new dangerously unemotive half-faced war buddy a drink and a girl is, for him, a step in the right direction. We hadn’t realized until now just how adrift he is.

Of course he’s also rather frighteningly brilliant. The wheels were turning in his head the second he found out Richard was a marksman, not to mentioned obsessed with guns. Sure, he’s making a home for himself and maybe for Richard too, but he also figured out a way to kill the man who sliced Pearl’s face. There were plenty of other ways he could have done it, but he chose the absolute cruelest way to do it. He sat there and calmly informed him that living with the fear of Jimmy was going to be worse than actually dying and once that information sunk in, he patted him on the shoulder (a Judas kiss if ever there was one) and had someone else kill him. Ice cold.

By the way, the guy playing Richard is apparently part of the Huston family dynasty and he sure did get the acting genes. His performance was absolutely riveting. A man with no emotional connections whatsoever. “It occurred to me, the basis of fiction is that people have some sort of connection to each other, but they don’t.”

Yikes, we went on there for a bit, didn’t we. Let’s spray some bullets:

* We can’t keep track of the mob stuff, so tell us if we’ve got this right. The Philly guys are the ones who stole the money from Nucky’s bag man. Meyer Lansky and Lucky 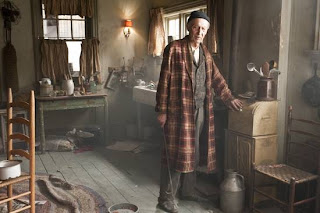 Luciano, on behalf of the New York mob, want to get in with the Philly guys and steal 150 grand from Nucky. Did we get that right?

* Meanwhile, Chalky thinks Nucky tried to test him. We haven’t had a chance to talk much about Chalky but we find his character fascinating. A black man in 1920, more than likely the child or grandchild of slaves, who has amassed so much power for himself he can essentially tell almost any white man who crosses his path to go fuck themselves.

* Lucy really is on the outs, isn’t she? We thought Nucky was going to keep her on the side, but he must really be smitten with Margaret. We thought the Jekyll and Hyde scene may have been a bit too on the nose, however. Men giving into their baser natures and the duality represented by a split personality – a bit too heavy-handed when juxtaposed with Richard killing Sheridan’s man.

* We must remember to make a note to remind ourselves in 30 years to have no more than one cat. Definitely have to write that one down. We always knew those little bitches were deadly.