We have to admit something. For us, it feels like we’ve done our best work with the Mad Style series and now we’re at that brief period after the finals have been graded but before the last day of the school year. With the last few entries, we didn’t feel like we said anything new. Lest you think we’re beating ourselves up over this, we look back at what we’ve done with no small amount of pride. In the parlance of the show itself, we feel that we’ve “changed the conversation” at least slightly when it comes to discussing this show. People have been discussing the style of Mad Men since the very first episode, but we saw a gap in the coverage; a chance to discuss what the clothes mean in the context of time, story, and character. A true examination of a truly talented costume designer, Janie Bryant, working on one of the most stylish shows in the history of television. We try not to pat ourselves on the back too much but this series was, by far, the single largest, most time-consuming project we’ve ever done.

We’re not saying it’s the end. Far from it. At some point we’ll update each of the character entries with their clothes from Season 4, plus we really do, honest and for true, plan on getting to the men eventually. It’s just that, with the main female characters, everything we wanted to say, we said. If you’ve been following this series, you can answer all of the following questions:

You probably had answers without even thinking about it too hard.

Anyway, at this stage in the game, unless there are radical character changes or brand new main characters, we’ve pretty much covered everything, as far as the female characters are concerned. We’re just going to feature the pictures and write whatever first pops into our heads upon viewing them. 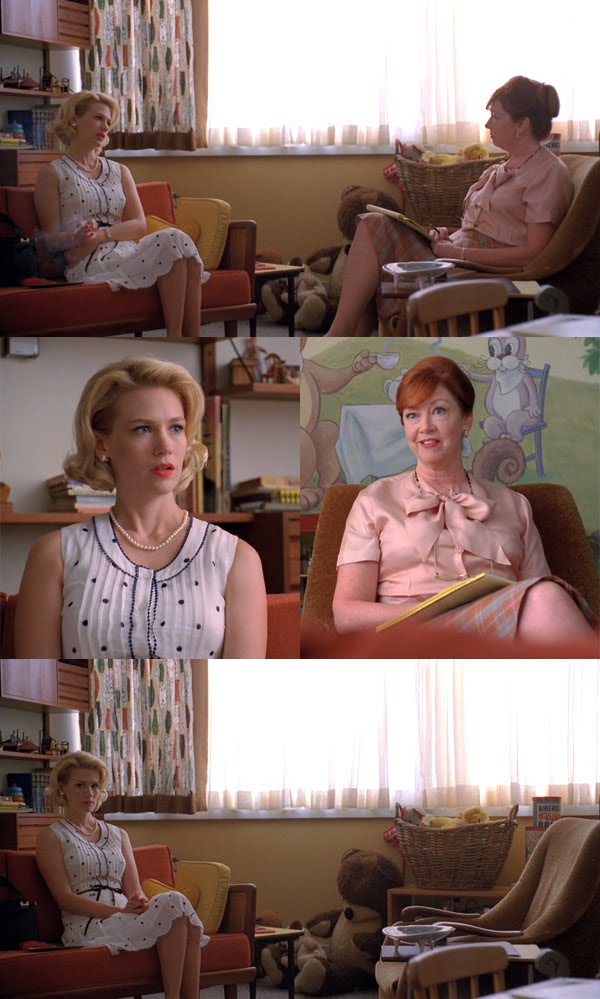 The soft peaches and orange of Dr. Edna’s outfit, tie her serenely into her autumnal surroundings. Betty’s the one that stands out in her stark, yet child-like black and white dress. She wore it once before, during the Junior League meeting she hosted in her living room last season. 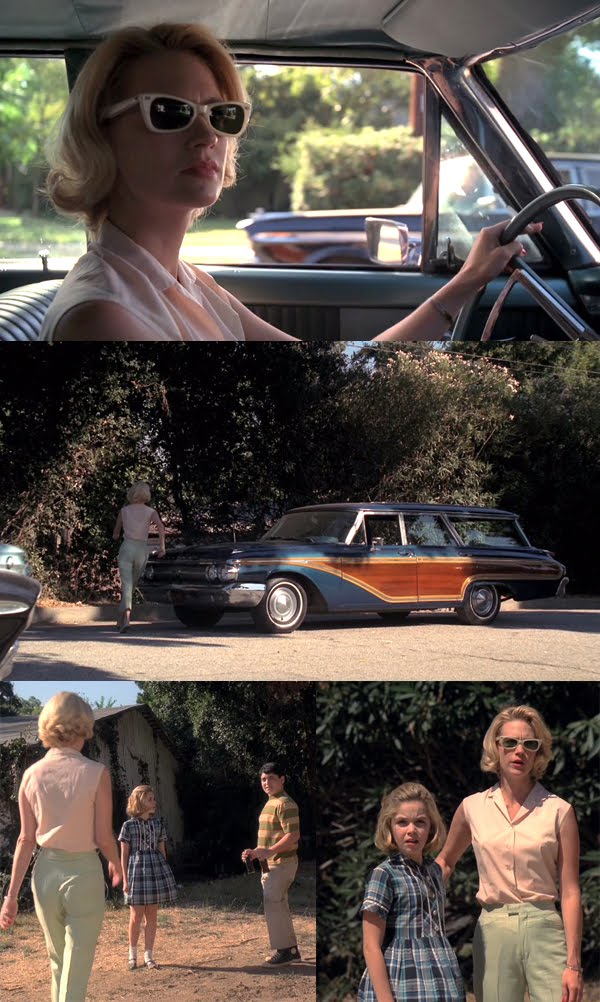 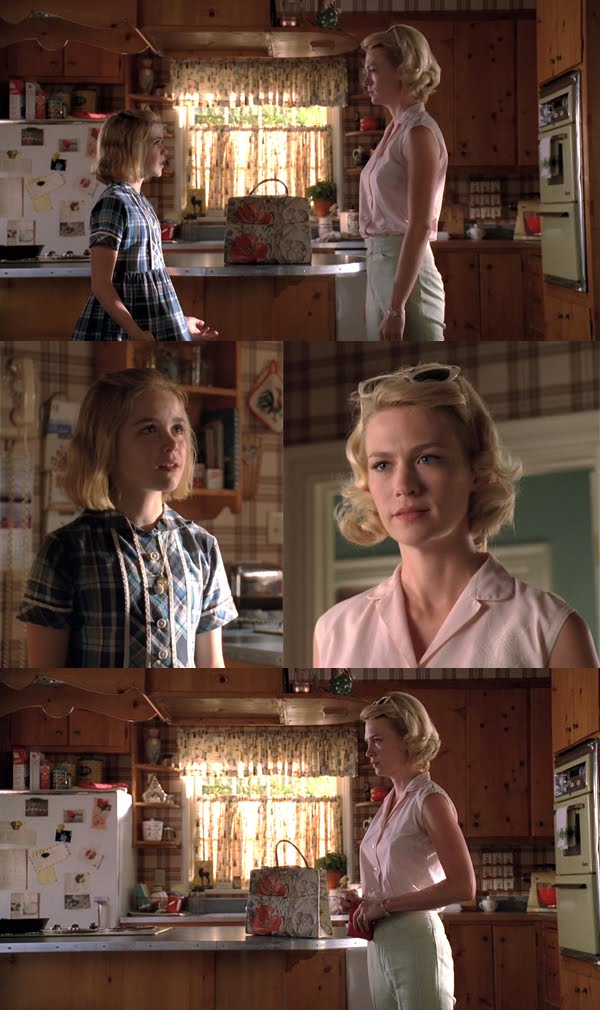 Betty’s in typical suburban mom clothes of the period. Nothing particularly notable about it. Let’s talk about Sally for a second. 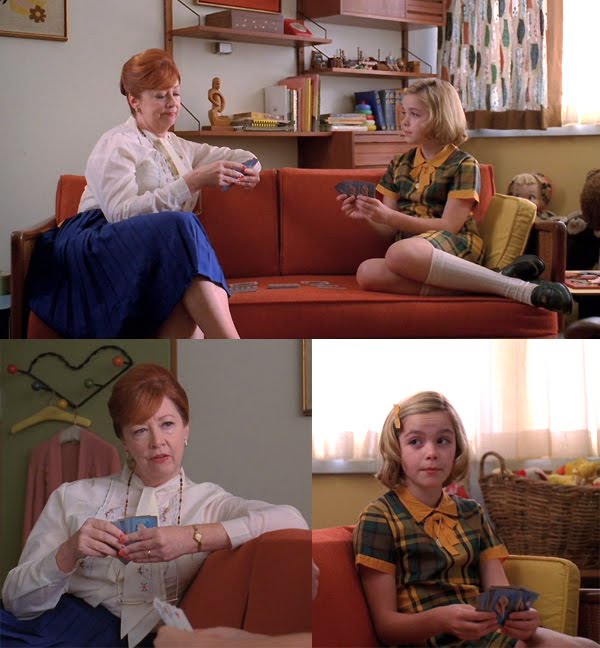 We haven’t gotten around to a Sally Draper Mad Style yet (See? We’ll NEVER be finished with this series.), but if we HAD done a Sally Draper Mad Style, then we would have been able to point out how much her style has changed this season. In previous seasons, she was typically shown wearing the kind of juvenile, little girl dresses with the cupcake silhouette and the mid-thigh hem length that were common for the under-ten girls of the period. This season, she’s been wearing what today we’d call “tween” clothes. She’s not a teenager but she doesn’t want to be dressing like she was when she was 5 either. Typically, she’s moving into the knee socks, Mary Janes, and plaid schoolgirl outfits of her age group. Less frou-frou, more suitable for the playground. 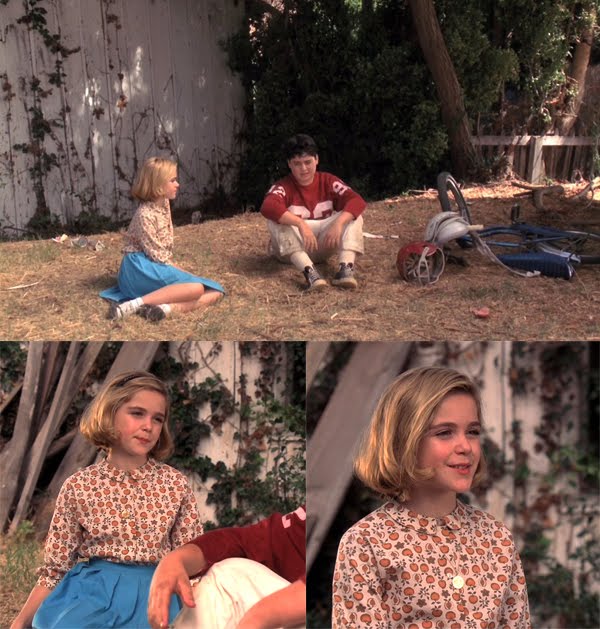 What’s notable here is how grownup she looks. These clothes are essentially child-sized versions of adult clothes. She’s even sporting a more adult-looking hairstyle here, all in service to the idea that Sally is growing up and becoming sexually mature. 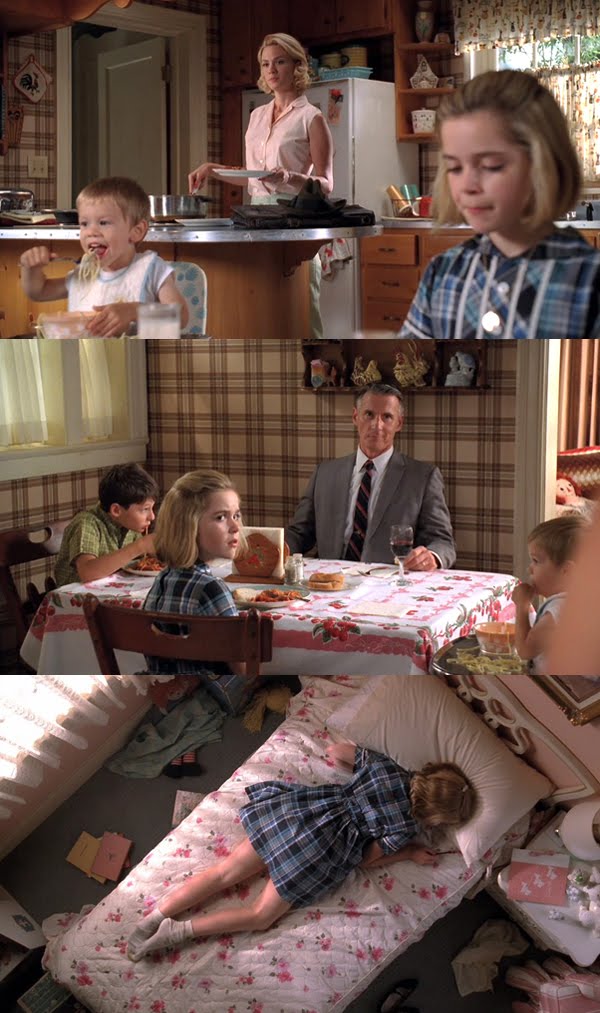 So Betty pulls a major bitch move and yanks everything away from Sally because she fears her daughter’s looming maturity. What better time to return her to her juvenile little cupcake dresses? Although we haven’t written her entry yet, we have been paying attention to Sally’s clothes for a while now and this dress jumped off the screen at us because it was such an obvious return to an older style for her. She’s been infantilized by her childish mother. 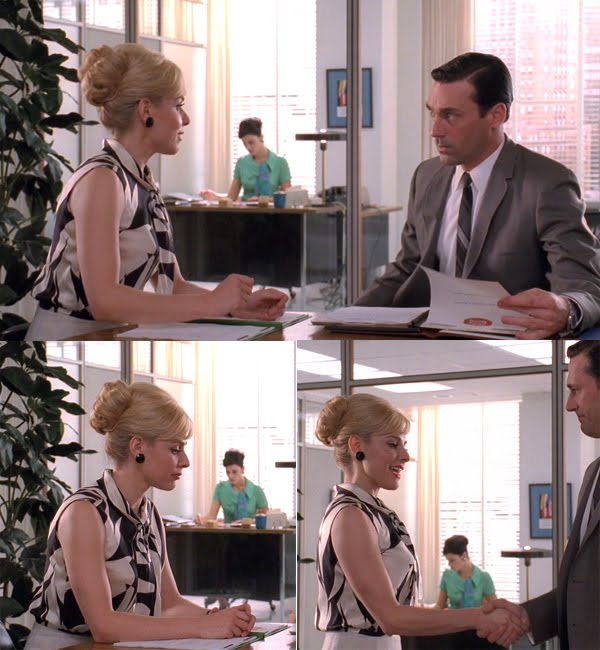 That’s a great little shot, framing Megan in between Don and Faye. Faye’s worn this blouse before while arguing with Don, but she was wearing a black suit at the time instead of a white one. It totally changes the look. Her black suits were all about standing up to the men around her, going toe to toe with Don in her suit of armor. Switching it up for white gives it a much softer feel, which is appropriate because they’re coming to the end of their professional relationship and (Faye hopes) the beginning of a more open personal one. 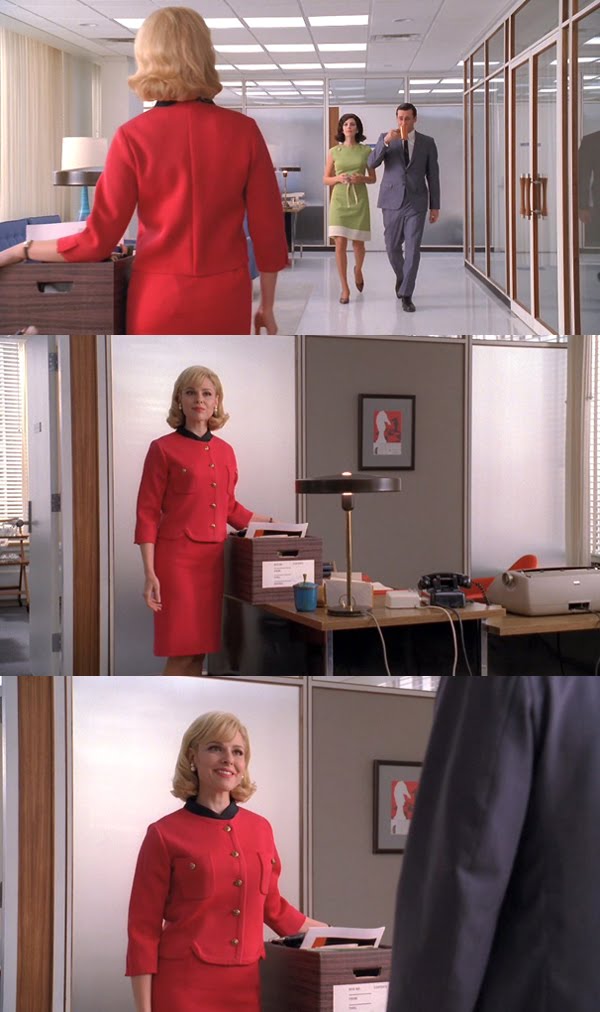 This suit jumped out at us, mainly because of the color. To our 2010 eyes, the outfit ages her about ten years. Even by 1965 standards, this is a mature, professional look. Peggy doesn’t dress quite like this because she’s too young. 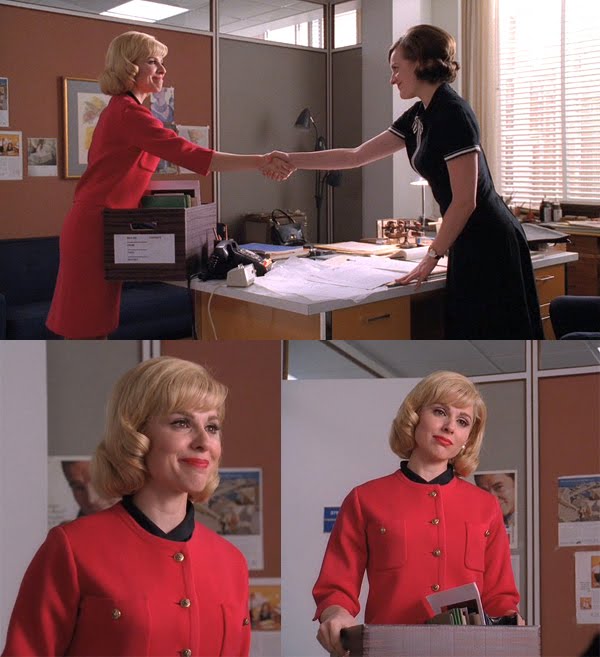 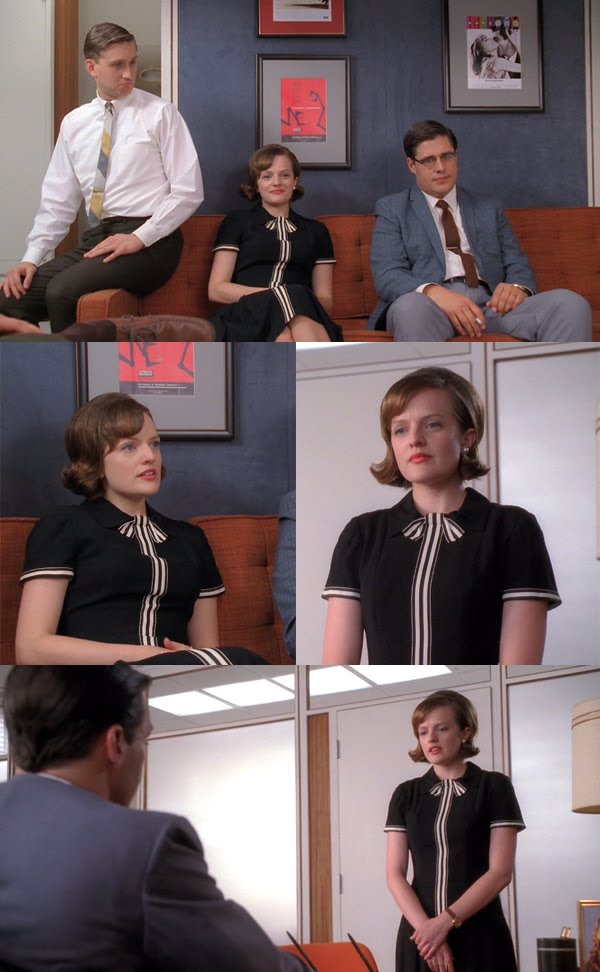 What a cute little dress. We noted before that characters who previously never wore it (like Joan and Peggy) have been working a lot of black into their wardrobes this season. That’s partially because of the more graphic mod styles that were trickling down to broader styles, but also to illustrate to the viewer the somewhat dark mood of 1965, at least in the SCDP offices. Some people mentioned that she’s essentially an upward-pointing arrow but we think that might be too literal a reading. 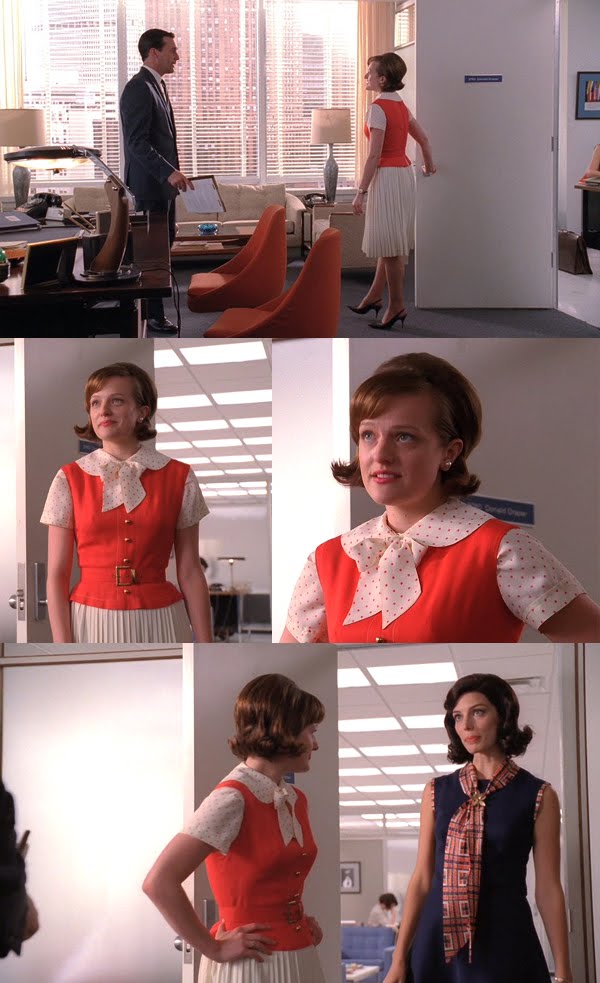 She wore this outfit before, most memorably the first time she slept with Duck. The blouse is slightly different this time. It’s a perfect little working-girl outfit of the period and it looks like it cost her some money. Of course she’d still have it in rotation a couple of years later. 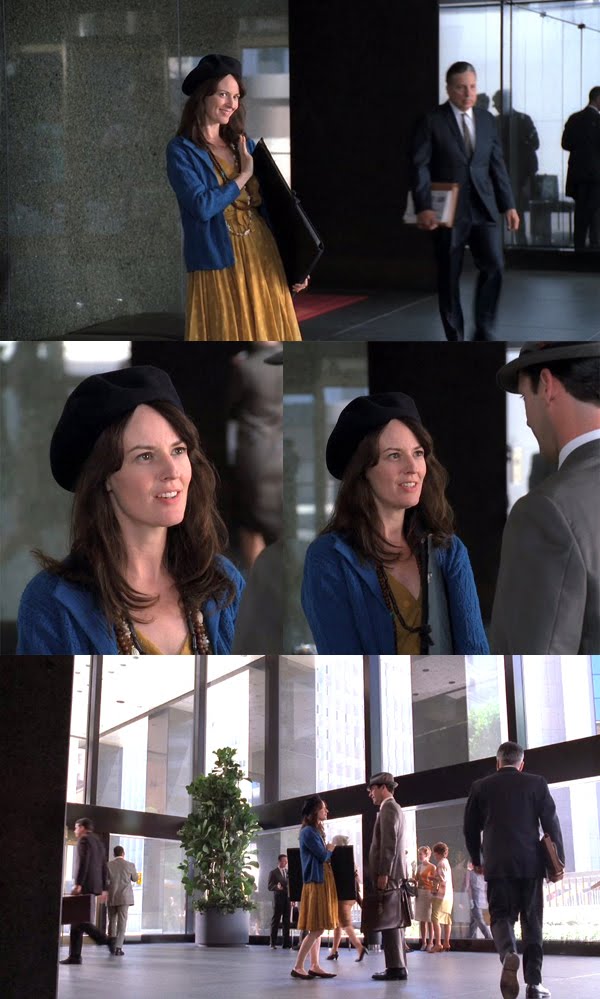 Ah, Midge. What a heartbreaking development. Her ballet flats, beret, and big chunky necklaces, not to mention her long, completely product-free hair, let you know right away that she’s an artist type of the period. But compare Midge to the arthouse crowd that Peggy’s been hanging out with lately. There’s nothing stylish or modern about Midge’s look here. It’s not that different from how she dressed 5 years before. She’s an artist, but she’s not part of the burgeoning downtown art scene. She’s clearly still on the periphery. 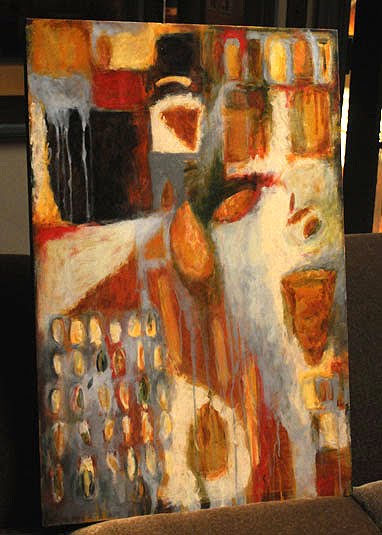 A lot of reviewers said they hated Midge’s painting but we kinda liked it. No real need for these shots except to point out the perfect art direction for this scene. You can practically smell that apartment. And it’s not a pretty smell. 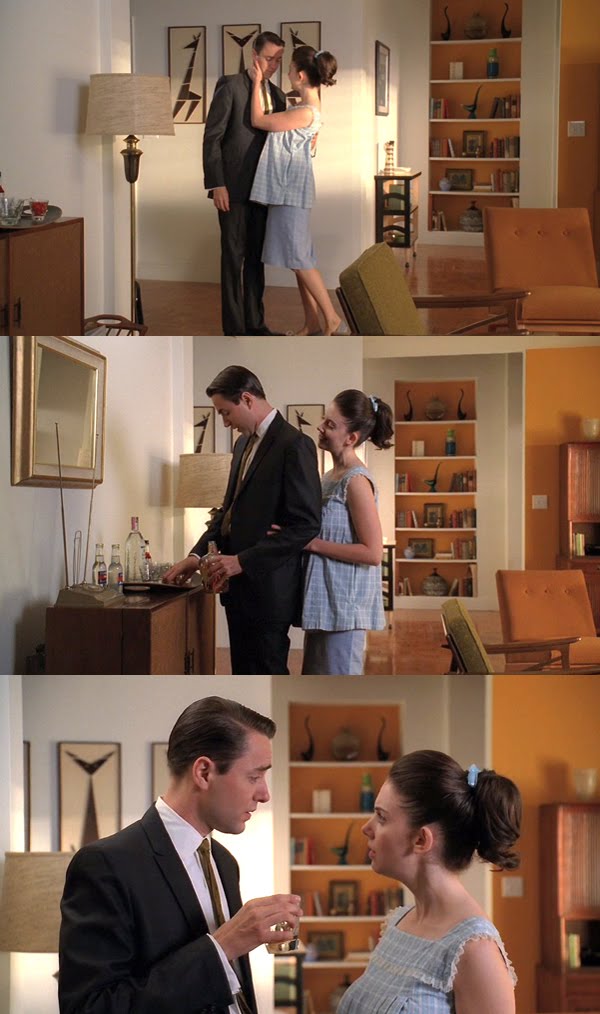 Trudy in a typical post-partum getup of the period. Everyone has pictures of some family member wearing this or something just like this. It’s notable here because when she and Pete have fought in the past, she was always dressed to match the room, but here she stands out in a powder blue that literally can be found nowhere else in the scene. Trudy Campbell’s a mama now and she’s not about to take any shit from her man.

Remember, this is NOT the end of Mad Style. We still have the finale episode coming up, plus the men, the lingerie, the kids, updating the female character entries; it’s all coming up. Also, we will be opening a special Sunday night T LOunge for the Mad Men finale episode. Wear your tightest dress and bring a cocktail shaker, darlings! We’re all going to gasp and clap and get drunk together as we say goodbye for another year to the Mad Men crowd.