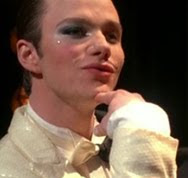 “I know you’re lonely, but you’re not alone.”

YAY! Glee is back!

Oh sure, it’s been back for weeks now, but we found the previous two episodes to be pretty disappointing, so with this week’s return to form, we’re just going to pretend the show went on mini-hiatus for a couple of weeks.

All we’ve ever asked of this show (aside from great musical numbers and funny lines) was for the characters to act in a consistent and believable manner. That’s not asking a lot. In fact, it’s the bare minimum one should expect from any fiction. And while it’s not required for characters to be introspective and self-aware, it’s nice every now and then for them to discuss their actions openly and have other characters call them on it. But we’re getting a little ahead of ourselves.

Puck’s in juvie and the club is down one member. No need to fear, though. Enter Sam. Okay, we kind of have a complaint right off the bat. Yes, this episode did good work in examining the characters’ actions and motivations, but Sam turned down membership in the club and here he is triumphantly returning with no explanation as to why. Anyway, Schu comes up with a duet competition and the kids are all game; a perfect hook for the writers to take a look at some of the relationships.

First up: Kurt, who looks to be heading down the same path with Sam that he headed down with Finn. We took Kurt’s character to task last season for his actions, but it didn’t seem like our readers were with us on that criticism. It was nice to see Finn, and especially Burt, basically tell Kurt that look, it sucks to be alone, but throwing yourself at people who aren’t interested isn’t the solution to that particular problem. There is a point right after a young person comes out of the closet where someone wise and sympathetic needs to take them aside and point out that, while their anger and frustration are understandable, they’re going to have to learn the value of patience and the importance of giving people some room to deal with your new open-ness. Most gay kids don’t get that talk and subsequently their anger a lot of times can lead to self-destructive behavior. In light of the public’s sudden recent discovery that gay kids have a shitty time of it in high school, it’s nice to see the writers of Glee taking the issue head on without being too preachy about it and without raising the gay character up to “sainted victimhood.” “When you’re different; when you’re special; sometimes you have to get used to going it alone.” It’s not the most uplifting thing to say to a gay kid, but it’s true and it’s good advice.

Anyway, Finn and Rachel are up first (of course):

Cute, right? We’re amazed that they can always find appropriate songs for Finn to talk-sing. That wailing ending was totally wrong for the song, though.

And then we get the other much-needed character revelation last night. Rachel’s “I’m not a very nice person.” HELLO? And you can have these moments without undermining the character, because Rachel thinks she’s doing something charitable by letting another team win the competition, but as Finn pointed out, she’s really doing something for herself in a runaround kind of manner. If Sam wins, then Sam stays in the club and they continue on to sectionals with their 12th member in place.

We only need to add one thing here and it’s exactly as it appears in our notes for the show:

That is easily the best number of the season but we’ll go so far as to say it’s in our Top 5 of the entire series thus far. Those two girls BROUGHT IT. Love them as a team.

Of course, we have a slight issue here. Sorry. At the end of the song, Rachel and Finn look at each other with a “What now?” The implication being that they won’t be able to throw the competition to Sam since Mercedes and Santana clearly just took the lead. It’s an issue that never gets brought up again.

There were an audible couple of “OhmiGOD”s when the opening notes to “Le Jazz Hot” started. We once said when we did the Musical Monday entry for Victor/Victoria, “If you are a gay man over the age of 35, you won’t get far telling us that this was not an iconic performance for you because we simply won’t believe you.” Is it still an iconic performance for 16 year old gayboys? We kind of doubt it, but we loved the performance anyway. Hey, where did he get all those costumes and that set and… Nevermind. Best not to ask too many questions. Let’s just head on in to the next number.

In other news, Artie’s still heartbroken over Tina and Mike, who are turning out to be quite the adorable couple.

Go Mike Chang! We figured he’d get a moment at some point this season but we weren’t expecting something that fun. He’s a charming performer and he and Tina are very cute together, even if they are having “Asian couple problems.” Artie has wheeled himself into the waiting arms of Brittany, who thoughtfully takes his virginity but thoughtlessly doesn’t understand what something like that would mean for Artie. It was another nice moment for a character that made total sense. It would have been easy for the writers to have Artie go over the moon for Brittany post-sex, but given what we know about the character, his being hurt over her lack of understanding was a much, much better way to go. It has more nuance to it and it leaves us wondering exactly how the Artie/Tina/Mike/Brittany thing might shake out.

Rachel and Finn settle on a “Springtime for Hitler” strategy:

Funny, but again, would a bunch of kids really be offended by this?

And then there’s Quinn and Sam:

It’s somewhat nauseatingly adorable (as Santana helpfully pointed out). Lorenzo reacted with a “feh” last night and when Tom asked him why, he said, “It’s such a … white song.” To which Tom added, “Then it’s appropriate because those are two of the whitest people on the show.” Quinn was also handled in a consistent and believable manner here. Her initial reaction to Sam’s unwanted attention made total sense given her romantic history. They make kind of a bland-looking couple but we think they’re going to be fun to watch as the blonde power couple in glee club inevitably butts heads with the brunette power couple in glee club. Rachel and Finn created a monster with those two.

And finally, even though Rachel’s actions were mostly mercenary this episode, like any Jewish Broadway Baby kinda gal, she knew a sister in trouble when she saw one, and she reached out to the only gay in her orbit.

It was very sweet, but still managed a slight level of hilarity, because if you’ve ever seen the original performance (and you really should), then you know not only were they almost note-for-note perfect recreations of the originals, but both of them were performing in the exact same styles; Rachel (in her probably sacred Barbra costume), whipping her head around and seeking approval from the audience, Barbra-style, and Kurt, kind of reserved and rigid, jerking his head around Judy-style. It was a perfect bit of mimicry that revealed a lot about both characters (i.e., that they’ve both spent years in front of mirrors perfecting said mimicry) and made for a very touching closing song.

And finally, here are your quotes. We were Sue-free this episode, so most have them don’t have that bite, but there were some good lines nonetheless:

“He’s on Team Gay. No straight boy does his hair like Linda Evangelista circa 1993.”

“I’m only making out with you because Puck’s been in the slammer for 12 hours now and I’m like a lizard. I need something warm beneath me or I can’t digest my food.”

“For a while I thought you were a robot.”

“All I want is a normal salad that DOESN’T HAVE CHICKEN FEET IN IT!”

“He emailed me like 60 mp3s of him singing and I thought it was Faith Hill.”

“Look, I don’t mean to be a bitch – well, actually I do – but the only thing you can give Brittany that she can’t get somewhere else is choice parking.”

“I think that you and I are a lot more similar than we think.”
“That’s a terrible thing to say.”