As Sterling Cooper Draper Pryce does a slow-motion implosion right in front of everyone’s eyes, the differences between what’s real and what the world sees took center stage. It’s about the lies everyone seems to be telling in order to get what they want. Blowing smoke. Sally 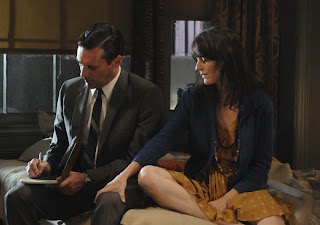 doesn’t care about having dinner with Henry. She’s just putting on a show of good behavior to avoid both her mother’s rage and her own. Phillip Morris wasn’t really interested in what SCDP had to offer them. They were just using them in a negotiating ploy with another agency. Midge didn’t just bump into Don. She tracked him down in order to hit him up for money to support her habit. SCDP isn’t really standing on its principles by denying tobacco clients. It’s a desperate attempt to salvage a sinking ship. That’s not really Robert Kennedy on the phone. He didn’t dump me. I dumped him.

In a lot of ways Don IS SCDP, whether in the minds of its employees or its clients or even the viewer. Because SCDP has hit the iceberg and all hands are in a state of panic, so is Don. The famous Draper cool is nowhere to be seen. He can’t even make an effective pitch for beans, coming close to embarassing himself. “I bet I could get a date with your mother right now.” Don’s not used to failing. Actually, that’s not true. Don’s terrified of failing because he never believed he deserved his success in the first place. The problem is, he’s up against a problem that appears to be pretty much unfixable. No client is interested in hearing a pitch from SCDP because no one believes they’ll be around in six months, a possibility that only becomes more likely with each rejection.

The partners are barely able to hold it together and not tear each other’s heads off and the entire staff is walking around on eggshells. Anyone who’s ever worked for a company when it’s going through bad times knows that feeling. That awful quiet while everyone waits 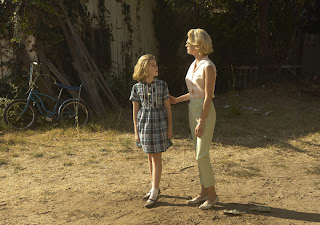 to see who’s standing under the guillotine. Peggy, as usual, seems to be the only one who’s trying to look at it from a different perspective. “Can’t we just change our name?” she asks. “If this was a dog food we’d change the name,” she adds, calling back to the Caldecott Farms account. That’s how bad things are. SCDP is horsemeat. “You always say, ‘If you don’t like what they’re saying about you, change the conversation.'” Don, who is right on the edge of despair at this point, can’t hear what she’s saying and dismisses it.

Out of nowhere comes Midge, to which we uttered “Holy shit!” We weren’t expecting to see her at all. We liked the development. It’s more realistic to have old characters like this pop up. People don’t literally fall off the face of the planet when they exit your life, no matter how much we may sometimes wish it were so. Don would know better than anyone, your past doesn’t always stay in your past. Unfortunately for everyone involved, this wasn’t a chance meeting and Midge isn’t quite the free-spirited libertine of 5 years before. The good news is her art improved. The bad news is she’s a junkie. What a depressing development. We 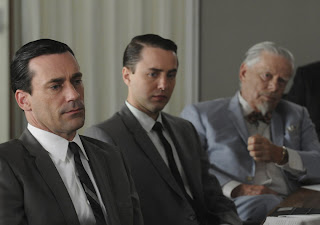 really liked Midge and admired her for living her life on her own terms. Sadly, there can often be a price for that kind of convention-flouting. Don gives her everything in his wallet and leaves with a painting in hand. “Glad to see you haven’t changed,” she says, and she’s only being a little sarcastic about it. But the thing is, he has changed.

Don has never really been influenced by the men in his life. It was always the women. Starting (as usual) with his mother, right on down to Anna, Betty, his various mistresses, and Peggy who told Don who he was. When he stared at Midge’s painting, he was staring at her own despair and trying to learn something from the power of her addiction. She saw him as the hero of the moment and so he decided to be a hero. But it was Peggy that showed him how. He ripped out the self-indulgent musings in his notebook and got down to some good old-fashioned strategic lying. He changed the conversation.

Meanwhile, back at what used to be the Draper homefront, Sally is putting on a big show for her mother by giving her whatever she wants in order to shut her up. Unfortunately, having Betty as a mother taught poor Sally that it’s best not to let people know what you’re really thinking. Dr. Edna seemed okay with this but we found it a poor lesson and a poor coping mechanism to teach a child. Still, there’s no denying she’s a wonderful influence on Sally and has her best interests at heart, unlike most of the other adults around her. Say, her mother. 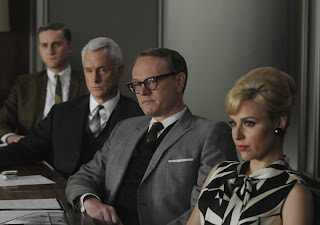 Betty panicked when faced with Dr. Edna’s suggestion for a reduced schedule. That would put the onus back on Betty to raise her daughter and worse, it would mean that Betty wouldn’t have these impromptu therapy sessions with her. Dr. Edna gently points out that she is a child psychiatrist and the point goes right over Betty’s head. Betty needs a child psychiatrist because she’s a child.

And what was more childish than her reaction to Sally’s perfectly innocent meetings with Glenn Bishop? Yes, Sally’s 11 and probably shouldn’t be secretly meeting up with older boys, but selling the house in response is an unusually punitive method of dealing with it. Not only is Sally losing her friend, she’s losing her home. Of course, it wasn’t just any boy, it was Glenn Bishop, someone with whom Betty had her own history. She once gave him a lock of her hair and broke down crying while admitting how lonely and sad she is. He once ran away from home thinking to rescue her only to have her call his mother to pick him up. So she made up a pointed lie about the “low caliber” of the people in the neighborhood, a final twist of the knife. “She’ll get over it,” she says with some satisfaction to Henry.

Back in the office, everyone’s abuzz over Don’s bold public declaration that Sterling Cooper Draper Pryce was NOT dumped. It was a ballsy, rock star kind of move and it remains to be seen how much of an effect it’ll have. It’s one of those things that could either pay off big or blow up in your face. Certainly the partners weren’t amused. They quickly deflated his cockiness and showed Don (and us) that actions like this aren’t automatic crowd pleasers, even if he expects them to be. 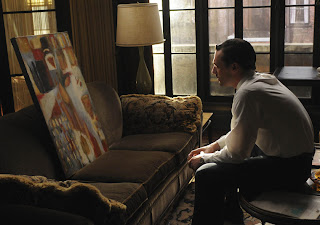 “It’s an ad for this agency. If you don’t understand it then you shouldn’t be in this business.” Don is looking at it purely from a creative standpoint and to be fair, it’s what he’s best at. The partners all have different perspectives and they’re no less valid. Bert had every reason to be furious with him for leaving their names off it. The only thing Bert has left is his name. He doesn’t even have an office. For him, this was the final straw. “We created a monster,” he says in disgust. Pete is not to be outdone. “You did what was best for you because you’re impatient and childish.”

To Don, there is only one person whose opinion matters to him on this. “Well?” he asks Peggy nervously. “You haven’t said anything about the letter.” With a well-earned smirk, she replies, “I thought you didn’t go in for those kinds of shenanigans.” Even he had to smile at that one. It’s been almost a year since he raked her over the coals for her Sugarberry Ham stunt, but she got him back. And she gave him her seal of approval. She gets it.

But it looks like no one else does, not even when The American Cancer Society calls about hiring them to do an anti-smoking campaign. Roger thinks it’s a joke. “Took me about 5 minutes to stop laughing. I hope I didn’t blow it.” What no one sees is that Don really did change the conversation. Everyone’s talking about SCDP in a different way. That’s what good advertising is supposed to do. Unfortunately, it may not be enough. “Yes, Don saved the company, now go get rid of half of it,” Pete says bitterly. 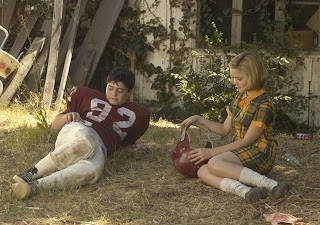 * We can already see that some people read Faye’s “Have your girl make the reservations.” as an indication that she somehow knows about Don’s tryst with Megan. We don’t think so. Faye’s been shown to be a little bit dismissive of secretaries and she’s always made the dinner reservations because she and Don had to keep their relationship a secret. She’s just enjoying the fact that they don’t have to hide it anymore. Having “the girl” make the reservations isn’t Faye sending some sort of message. To her, it’s just the natural order. Secretaries do those sorts of things.

* Having Don pay Pete’s share was the first time in a long time we felt like saying “Attaboy, Don.” He can be such a self-absorbed mess most of the time, so it’s nice to see him do the right thing. Pete’s put up with a ton of Don’s shit and saved his ass by pretending to lose the American Aviation account. Attaboy, Don. And speaking of Pete …

* That Trudy certainly isn’t the obedient little wifey she was five years ago, is she? She’s not letting little Tammy Campbell (with a name like that and parents like that, you know she grew up to be the biggest entitled princess bitch in the world) grow up in a house where fathers are reckless and raise their voices, no sir. 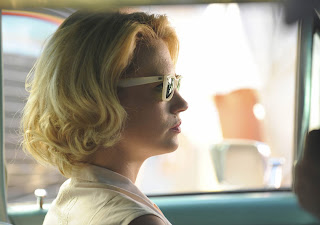 elt goodbye to Dr. Faye and we loved even more that Faye couldn’t really see what Peggy was getting at. “You do your job so well and they respect you and you don’t have to play any games.” “Is that what it looks like?” Peggy could use a mentor other than Don and Faye could use a woman friend who understands the loneliness that comes from being a trailblazer. One of the most important things the feminist movement did was bring women together as a force. Faye just doesn’t see the point of meeting Peggy for drinks to get to know her better.

* We weren’t happy to hear that Lane’s family is back in New York. We liked swinging Lane and his black bunny girlfriend better.

* We didn’t believe that was Bobby Kennedy for a second.