Just a quick once over for Allison. She definitely favors mixing shades of blue. Not to mention she and Peggy could get into a pussy bow battle if it came to it. These are good girl clothes. Just enough style but not too flashy. Smart work clothes. 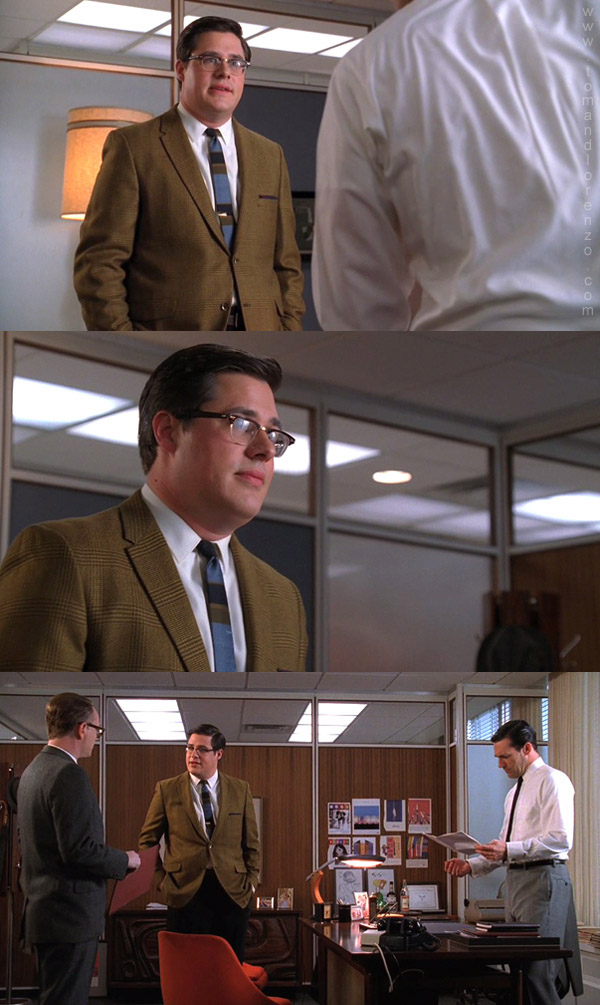 A couple shots of Harry in his gold-toned 1964/5 duds. We never could have predicted that he’d be the first of the men to go in this direction but it makes sense, given his apparent frequent trips out to L.A. to pal around with TV bigwigs. These aren’t flashy clothes, but look at him in comparison to Lane and Don. These are young people’s clothes. For now, anyway. A little more colorful and relaxed than their grey suits.

Also, we’ve been meaning to point out that of all the offices we’ve seen in SCDP, Don’s is closest in style to his old office. He’s stuffier than he likes to admit. 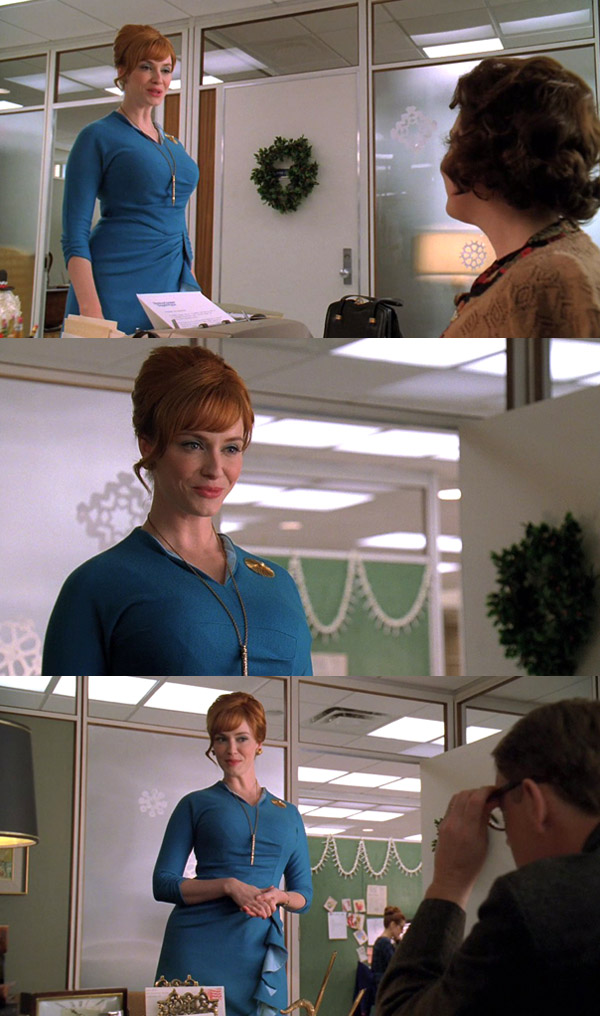 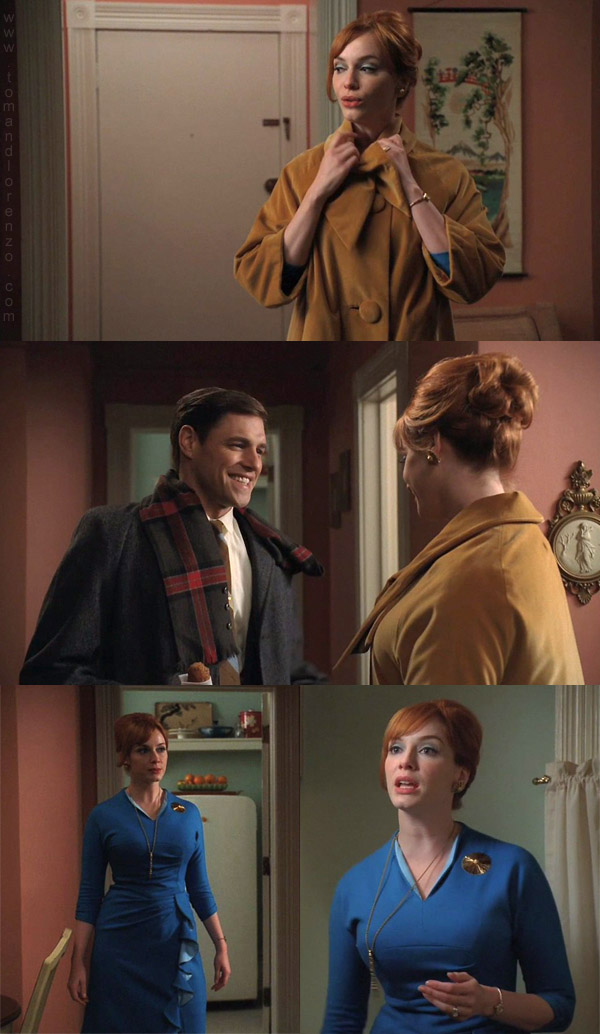 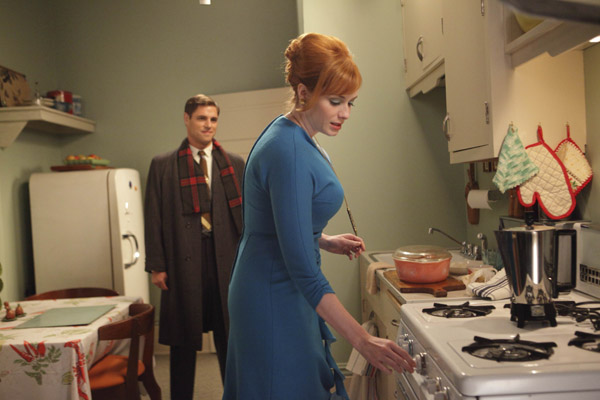 Joan may have the detailing upgraded, but she doesn’t deviate far from what works for her. She’s only got a couple more years before this silhouette looks out of style. We wonder how far into the sixties she’ll take it. For 1964, she went with a lighter shade of blue and a big ruffle on the hip, with a gathered 3/4 length sleeve and a plain neckline. We always wondered (okay we’re big Mad Men dorks) whether she left her pen necklace at work or she wore it home. To be honest, we were a bit surprised to find she wears it home.

Love the gold coat with the big tie at the neck. That’s a very unusual color for her. Also love that big modern-looking brooch she’s wearing. 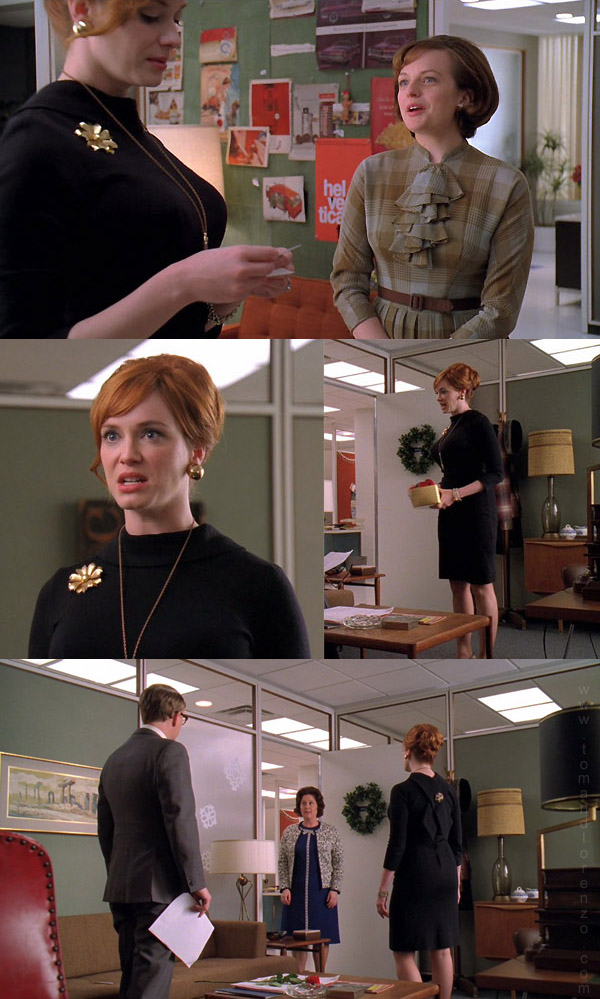 Okay, this represents two shocking developments in Joan’s wardrobe. One, she’s wearing a black dress. VERY new color for her. But the other interesting development is occurring south. Why, we do believe Mrs. Harris’ hem has gone up an inch or two. We’re nowhere near mini-skirt levels, but the rise of her hem makes us wonder if she even will wear mini-skirts down the line when they become a little more respectable. Even Jackie was wearing them by ’67 or ’68. Can you imagine Joan in a mini-skirt?

She may have introduced a new color and a higher hem into rotation, but everything else about this look is pure Joan, right down to the scarf detail in the back, held in place by a brooch, which appears to be a smaller version of the brooch she’s wearing in the front. Those are some big earrings she’s wearing too. Nothing too far outside her previous looks, but definitely more prominent.

As always, she’s attempting to be the perfect supportive wife and her outfit matches her surroundings almost perfectly. The pink lei calls back to the pink walls and that teal in her dress is picked up all over the apartment. It’s kind of cute how she called it a “Hawaiian” dinner, when it’s just ham with pineapples and she’s dressed in some department store version of Chinoiserie. 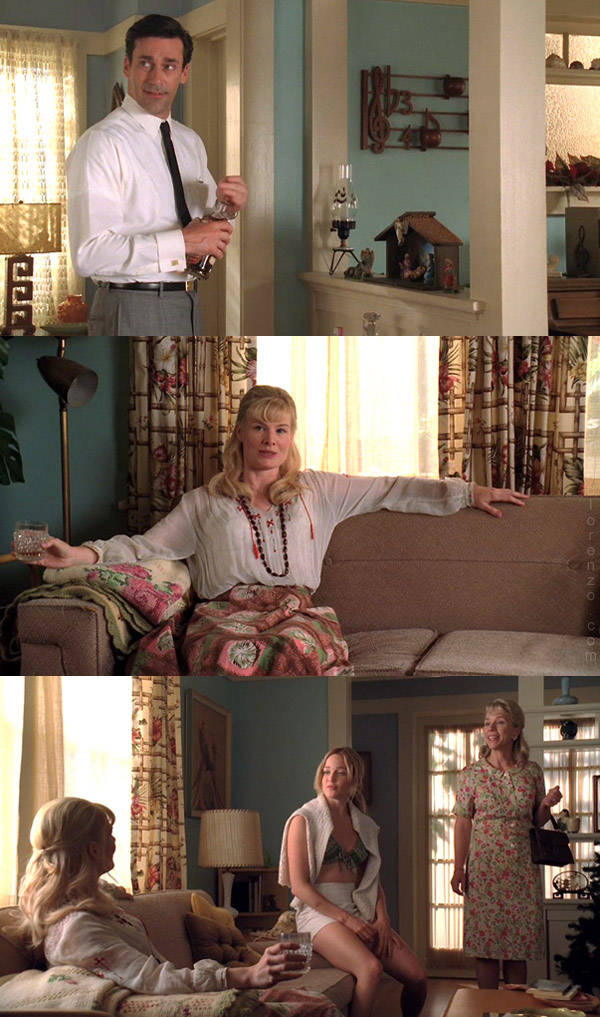 Anna’s place screamed “beach and sun” but manages to stay just on this side of cliche. All the colors are natural; sands and sky or water blues, whites. It’s all sky and beach on the inside. There’s a lot of blonde wood and natural elements: plants, the bamboo and tropical flower print in the drapes, the rose print on the blanket. Additionally, there are a lot of natural elements in the clothing of Anna and her family. Florals and pale, linen-y almost washed-out looking clothes. Anna is very tied to the space with her clothing. In fact, when you look at all of these women you know who each of them are immediately.

Note the music notes on the wall. She’s a piano teacher, remember. 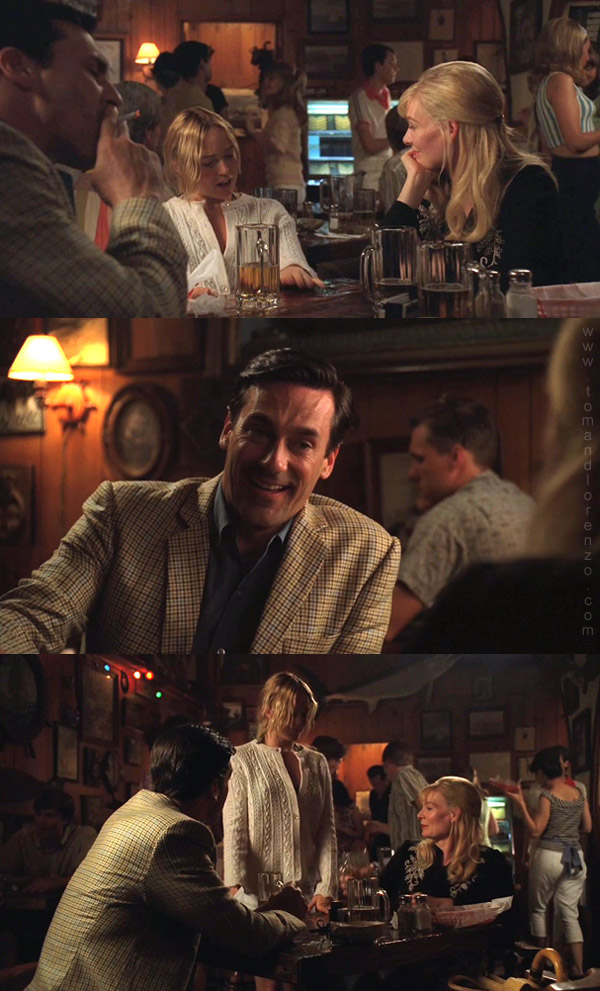 Honestly, we just took these screencaps because we wanted to point out Don’s California-relaxed beige plaid sports coat and the outfits of the twisting kids dancing behind them. The girl with the big blonde hair in the striped belly tank is our favorite. 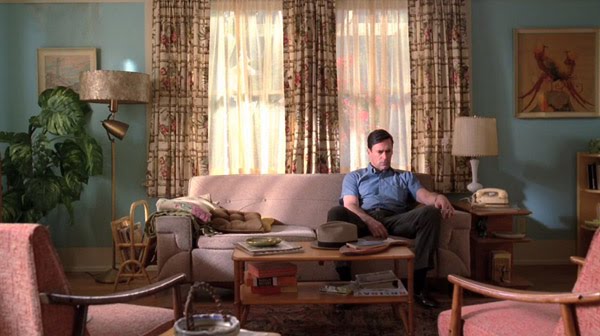 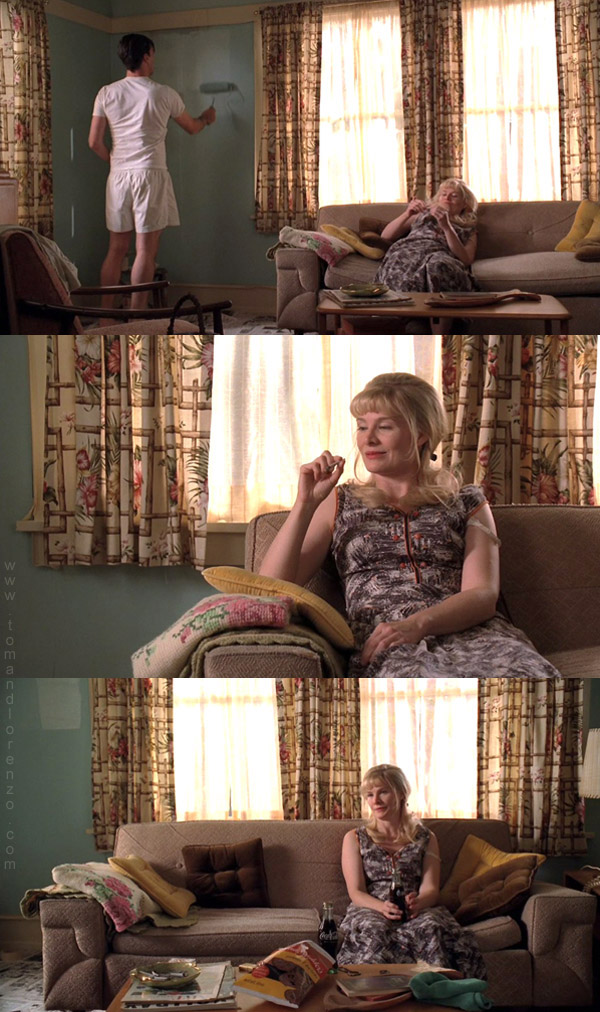 Some great shots of Anna’s Danish Modern-style furniture, all sandy woods and slightly curved lines. This furniture looks more than a couple years old. Once again, Anna’s in a dress that ties her to the space, especially that couch, which she seems to destined to sit on, forever watching other people pass in front of her. 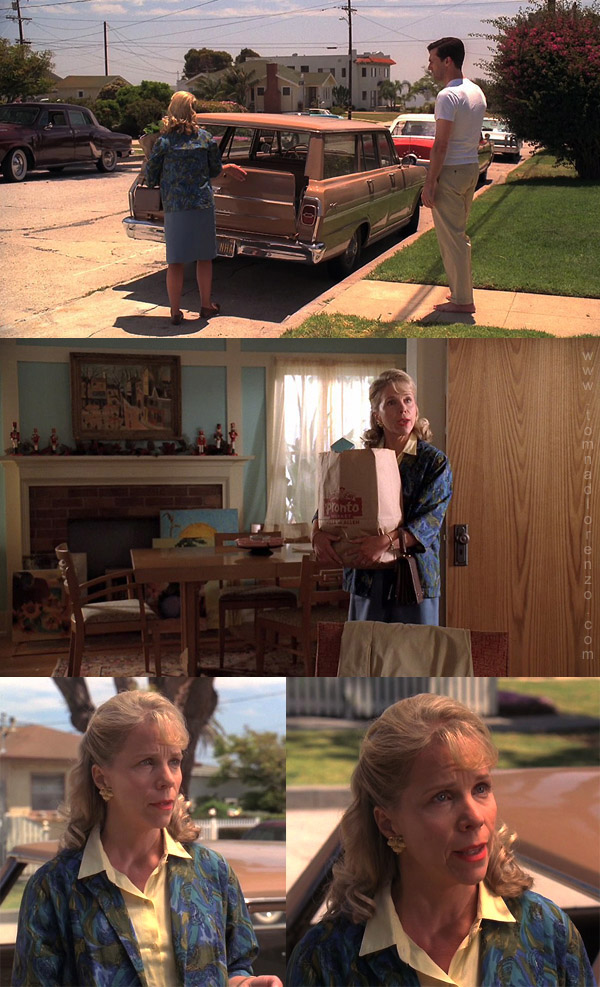 A couple things to highlight here. Patty’s car. We’re not car people so we rely totally on our commenters to discuss make and model. Patty’s clothes, which continue the natural blues, greens and yellows that seem to dominate Anna’s family, but it’s in a swirling modern print. Patty’s one of Anna’s tribe, but her colors are darker and more tumultuous. And finally, just look at that gorgeous Danish Modern-style dining room set.

Here she’s not in the neutral tones that characterize her house. Instead she’s in a bright stripe that goes quite well with her newly painted wall, which figures prominently in the scene. Hopeful colors for a scene that was all about the lack of hope, at least for Dick. 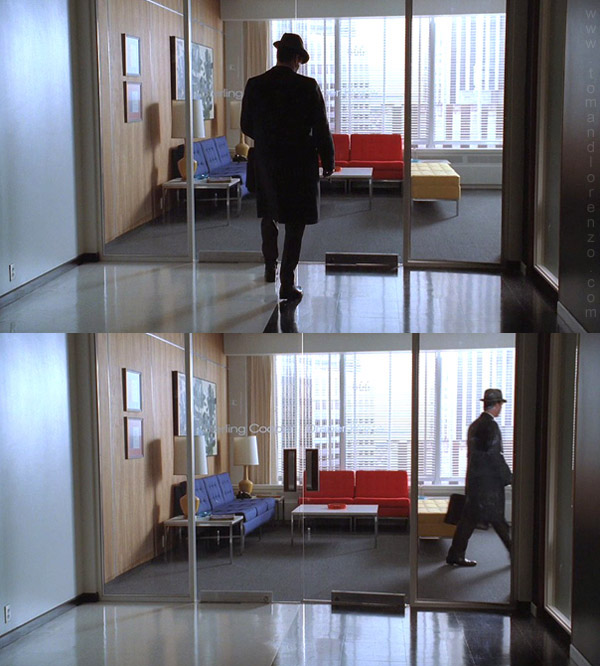 A quick shot of the fabulous primary-colored furniture of the SCDP lobby. Compare this with the wood-paneled, SC offices, with its dusty ’50s pinks and blues. This screams RIGHT NOW in 1965. 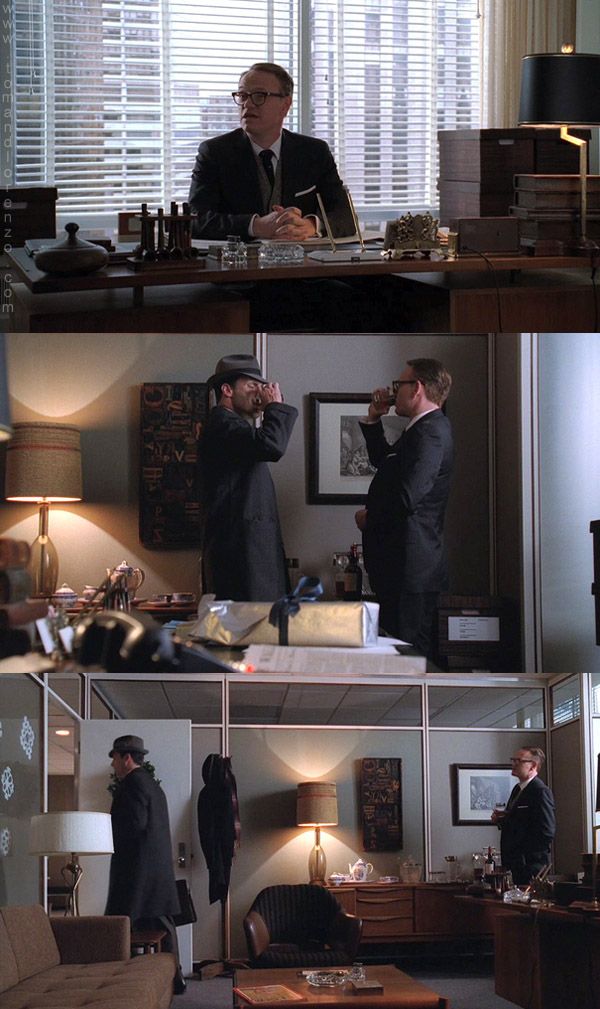 And a quick shot of Lane’s office, which we wanted to highlight because it’s so grey and stuffy and dark, kind of like Don’s man cave of an apartment. We do want that striped chair with the leather arms, though. That’s pretty fabulous.

Matching hookers in green, the color of money. The shimmering metallics we saw at the SCDP Christmas party have been embraced by more than ad men’s wives, it seems. To be fair, it’s New Year’s Day and they did seem to be more of the call girl than the street walker variety, so the dresses are appropriate. They’re a little flashy, a little low cut in comparison to what you see other women wear on the show, and the jewelry is a bit loud and a little cheap-looking. Oh, and the hair is high. The funny thing about sixties style is that it went in both directions. What we were seeing on the runways at the time – heavy makeup, mini-skirts, big hair – happened to work really well for, well, hookers and strippers. This trend ran in both directions simultaneously, one of the many examples of the ways that street culture and so-called “high” culture stole from each other in the 1960s. The end result was the normalization and commercialization of subculture, which is one of the themes of Mad Men.

Who knew we could get all that out of hooker clothes? 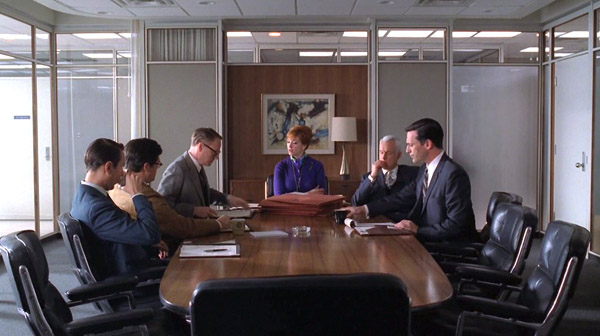 And finally, the SCDP principals ring in 1965 at their fabulous conference table and chairs.

We also wanted to highlight this shot for another reason. Many readers noted that Joan is wearing purple in this scene and that must mean bad things for 1965. It’s possible. After all, we’re the ones who started that whole “Joan in purple” thing. Although we have to admit, we feel like we want to walk that one back a bit.

See, when it comes to doing a formal analysis of someone else’s work, whether that’s an author, artist, director or costume designer, there’s what you as the audience member pick up and take away from it and there’s what the originator of the work intended. These aren’t always the same thing, but that doesn’t make either point of view less valid than the other. They’re just different ways of approaching the work.

We noted that whenever Joan wears purple she tends to be in some sort of vulnerable position. That got short-handed to “bad things happen to Joan when she wears purple.” That’s not entirely true or what we meant and it implies that this kind of analysis is a sort of code that only needs to be cracked, Da Vinci Code-style, and the whole story will be laid bare to the viewer. Purple=bad things.

It’s quite possible the fact that Joan wears purple so often whenever she’s in a vulnerable position is due entirely to prosaic concerns or could even be based on nothing more than Janie Bryant’s belief that Christina Hendricks looks great in the color. What we noticed and what we thought was worth pointing out, was the frequency with which it occurs whenever the scene has a particular downbeat feel to it, and it seemed to always revolve around issues with romantic partners. We’ll still point it out when we feel it merits that kind of comment, but we just wanted to walk back the idea that one color always equals one thing here.