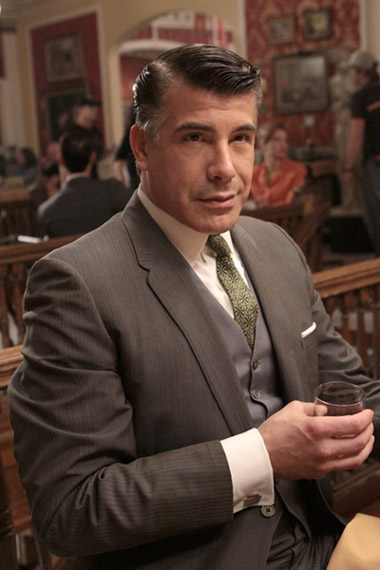 “According to Mad Men’s Bryan Batt — who stars as Sal Romano, Sterling Cooper’s closeted art director, fired by Don after refusing to service a randy tobacco executive — he won’t return for the show’s upcoming fourth season. “I was supposed to be notified by December 31,” he tells TV Guide, “and nothing.” Mad Men creator Matthew Weiner makes it sound even more dire: “We don’t murder people on our show, but for there to be any stakes, there have to be consequences … I know how people felt about Bryan. I obviously love working with him, and he has been an indelible character since the pilot. But I felt it was an expression of the times that he couldn’t work there anymore. It’s the ultimate case of sexual harassment.”

A little birdie told us about this months ago but we didn’t want to publish it without confirmation and no one was confirming it. This truly blows. In three very short seasons (and really, only a little more t

han a dozen or so appearances) Sal Romano quickly became one of the most important gay characters in the history of television and Bryan Batt gave one of, if not, the most sensitive and nuanced portrayals of the agony of the closet for people of a less enlightened time. Of any time, really. Despite the sadness in the character, Batt and the writers gave him a wit and a sass that made him eminently watchable. We the 21st Century viewers could tell from 50 feet that he was gay, but his co-workers and even his poor wife were clueless about it. Unsurprisingly, Sal became one of the more popular of the characters on the show.

We really hate the idea of this, but if we’re being honest with ourselves, we have to admit on

some level we understand Matthew Weiner’s explanation for it. If the show really places importance on things like verisimilitude and accuracy to the period, not to mention a natural aversion to melodrama, then having Sal’s story end here makes a certain amount of sense. He was never going to get a happy ending and men like him, who were somehow caught out on the job, found their lives ruined. We don’t support the idea of his absence from the show and we sure as hell don’t like it, but we can understand it because in a way, it’s historically accurate. It’s appropriate. The likelihood of a guy in Sal’s situation being rehired by former co-workers at that time was very, very slim.

But shit, it still really blows. What was great about Sal was that he really did provide a huge audience an ed

ucation in gay history, something many of those people were not likely to have ever been exposed to. Better yet, because of good writing and fantastic acting, the overwhelming response to the character was sympathetic. That’s a major feat. We can all applaud Ellen and Will & Grace for kicking down doors (and deservedly so), but no character or actor has ever really tackled the issue of being gay, the real nuts and bolts of it, and how it affects one’s life as well as this one did.

We grabbed a hold of our little birdie and asked them if they’d pass a question along to Bryan. This story just broke and we didn’t want to hassle him for an interview, so one good meaty question was all we had time for. He’s such a sweetie, we got a response almost immediately. Here it is:

“We’re heartbroken at the prospect of one of the best, most complicated, most talked-about gay characters in the history of television disappearing from

our screens. Do you think Sal changed anything for gay portrayals going forward? Is there a Sal Romano legacy?

I think Sal is a deeply and honestly written character and because of the constrictive prejudices of his time, he is forced to live a lie. It is sad but painfully true that millions of men and women throughout history have had to deny their basic core feelings and physical attractions…even sadder is the fact it continues today. I believe he reminds us of the struggles and indignities gay people have endured and continue to do so now. Sal’s legacy is not just that he is the first of his kind on television, but through his story many younger generations realize how far the movement has come, but more so how we need to progress. I do hope this is not the very end for Sal as I have loved every moment portraying him, roles so great are a rare and treasured gift.”

You know, we hope it isn’t either. Nothing’s set in stone on this show and you never know what direction Weiner and the writers are going to go. If there’s enough of a backlash against the idea…who knows?Until then, we’re going to imagine Sal at the Stonewall, screaming at the cops along with the drag queens and finding some sort of peace with himself. It probably wouldn’t have happened that way, but now we have the luxury of writing our own ending.